All too often, both the Putin-apologist horseshoe left and some good faith members of the anti-war left have adopted a single frame to think of Vladimir Putin’s decision to invade Ukraine: NATO. 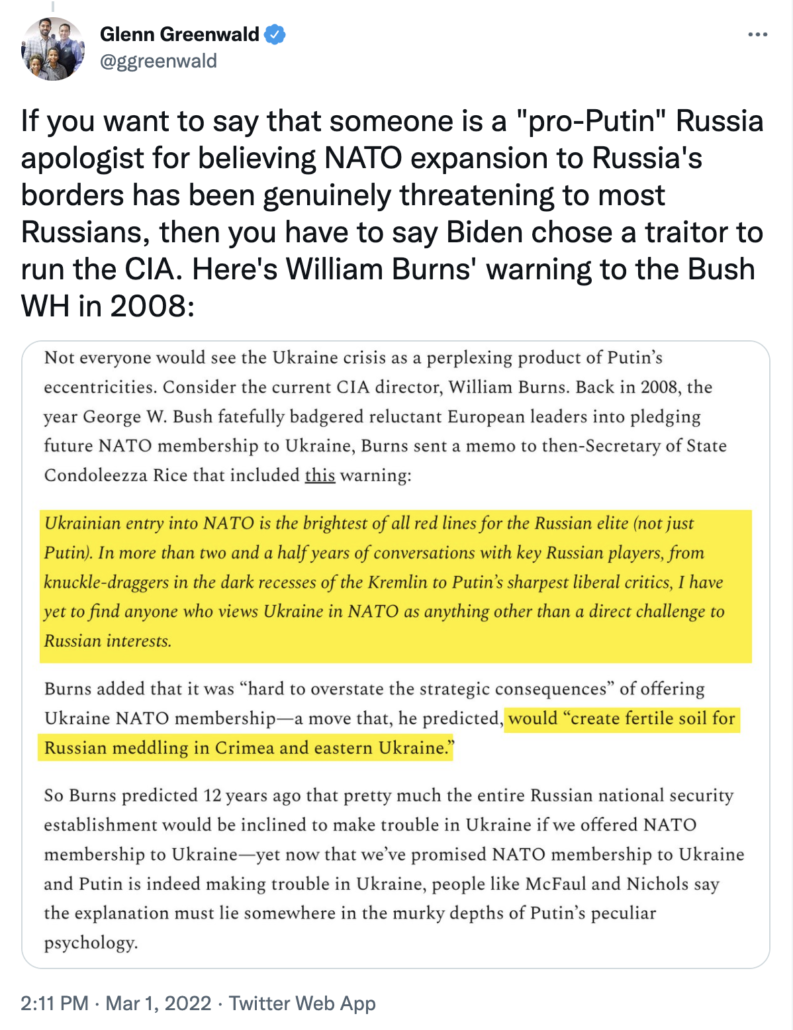 In the sloppiest versions, the idea is that Bill Clinton provided “guarantees” to Putin that NATO would not expand, and since NATO has expanded, the US bears all the responsibility for Putin’s invasion of Ukraine.

NATO is undoubtedly a big part of Putin’s grievance. Fiona Hill describes that this moment has been coming since 2007.

Hill: I think there’s been a logical, methodical plan that goes back a very long way, at least to 2007 when he put the world, and certainly Europe, on notice that Moscow would not accept the further expansion of NATO. And then within a year in 2008 NATO gave an open door to Georgia and Ukraine. It absolutely goes back to that juncture.

Back then I was a national intelligence officer, and the National Intelligence Council was analyzing what Russia was likely to do in response to the NATO Open Door declaration. One of our assessments was that there was a real, genuine risk of some kind of preemptive Russian military action, not just confined to the annexation of Crimea, but some much larger action taken against Ukraine along with Georgia. And of course, four months after NATO’s Bucharest Summit, there was the invasion of Georgia. There wasn’t an invasion of Ukraine then because the Ukrainian government pulled back from seeking NATO membership. But we should have seriously addressed how we were going to deal with this potential outcome and our relations with Russia.

But it’s not just NATO. For years, Putin has portrayed any popular uprising for democracy as a CIA plot, a claim that many anti-imperialists championed, thereby denying those calling for democracy any agency. And the 2014 ouster of Viktor Yanukovych (which more complicit members of the horseshoe left claim was simply a coup led by Nazis) set off a concerted plan that incorporated support for Brexit, an attack on US elections in 2016, all conducted in parallel with relentless targeting of Ukraine. 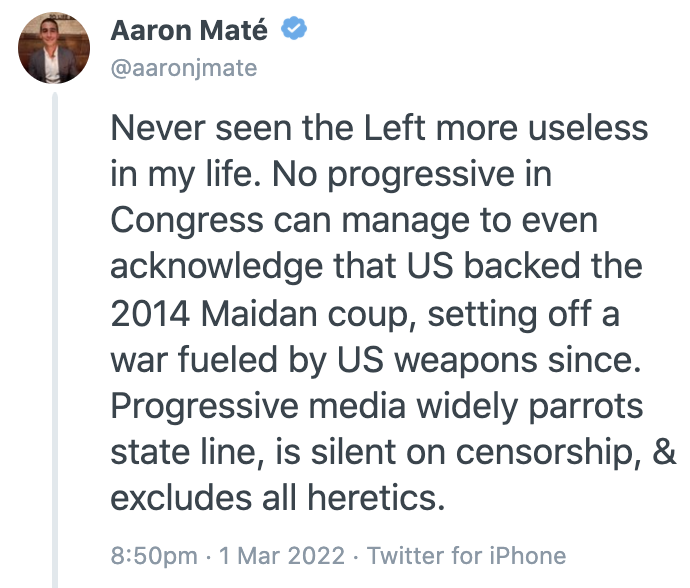 This invasion is the continuation of not just the annexation of Crimea and persistent war in Ukraine’s East, but also the hybrid attacks on Ukraine’s power grid and, via NotPetya, on anyone paying taxes in Ukraine and therefore any international business doing business with it.

Russia’s efforts to cultivate Tories in the UK, populists in the EU, and the Trumpist right, including a good deal of disinformation capitalizing on Trump’s narcissism, was always closely connected to Russia’s closer goals in Ukraine (and, indeed, involved the participation of some of Trump’s closest allies, starting with Paul Manafort and Rudy Giuliani. in Ukraine).

The horseshoe left can’t acknowledge this, of course, because it would amount to admitting that they have been lying in Russia’s service since 2016, conflating their own manufactured “RussiaGate” for Russia’s real attack on US democracy in 2016 and afterwards, debunking the former while repeating Russia’s lies about the latter. Because the horseshoe left can’t admit they were duped into being mouthpieces gleefully attacking democracy, they have real incentive to ignore the ways the Ukrainian invasion is not just a reaction against NATO, but also an attack on democracy, on a rules-based order, on the European project that always aspired (however imperfectly) to improve on the hypocritical liberal aspirations of the United States.

The thing I don’t understand, though, is how little of the horseshoe left’s criticism is about Neoliberalism. If you’re going to attack Bill Clinton, why not attack the way the US pushed shock therapy on former Soviet states, including Russia?

To be sure, Putin is not unhappy with the results of that, and so is not complaining about the imposition of a form of capitalism that allowed Oligarchs to loot the state, and through them, Putin to accumulate power. Putin has made the most of the organized crime that filled the vacuum of the state.

But as the EU has moved with remarkable (though selective) swiftness to pressure Putin through those networks of Oligarchs, as Germany, Italy, and Cyprus took steps it wasn’t clear they would take, a critique of American-led failures of capitalism is especially important, not just to ensure that the Oligarchs do get sanctioned and in hopes that the UK begins to wean itself of Russian dirty money.

Ukraine, with Europe, needs to survive this attack, find a way to rebut the invasion and build a path forward.

But whatever else this moment has done, it has made it clear how easy it was for Russia to pervert democracy in the places proudly claiming to practice it with the least little bit of Oligarch cash. Having ripped off the bandaid of Russian influence, Europe (at least) has the opportunity to formalize protections against purchased influence.

Such lessons, of course, extend beyond Russia to America’s own failed imperial catastrophes, most notably in Afghanistan, where US-backed corruption made it easy for the Taliban to regain credibility by comparison. US hegemony is on the wane because of Green Zone thinking about capitalism, which fostered the kind of corruption that made Putin powerful.

Such lessons extend, as well, to America’s own fragile democracy, subjugated in recent years to endless supplies of corporate cash, which led in 2016 to the election of a man who aspired to impose a kleptocracy every bit as corrupt as Putin’s.

Vladimir Putin has gotten a large swath of anti-imperialist American leftists to parrot a claim that he invaded Ukraine because of NATO, and only because of NATO. Not only has that made them willful apologists for the kind of imperialism they claim to abhor, even while ignoring the direct assault on democracy and the greater aspirations to human rights adopted by Europe. But it has led them to ignore an obvious critique of US and Russian power that would be a necessary component of building a new, more resilient order if we survive this war.