There’s a telling error in the January 6 Committee’s filing aiming to overcome John Eastman’s claims his emails are covered by Attorney-Client privilege. In the section asserting that Trump had probably violated 118 USC 1512(c)(2) — the same obstruction statute used to charge over 200 of the other January 6 defendants — the filing asserts that six judges “to date” have “refused to dismiss charges against defendants under the section.” 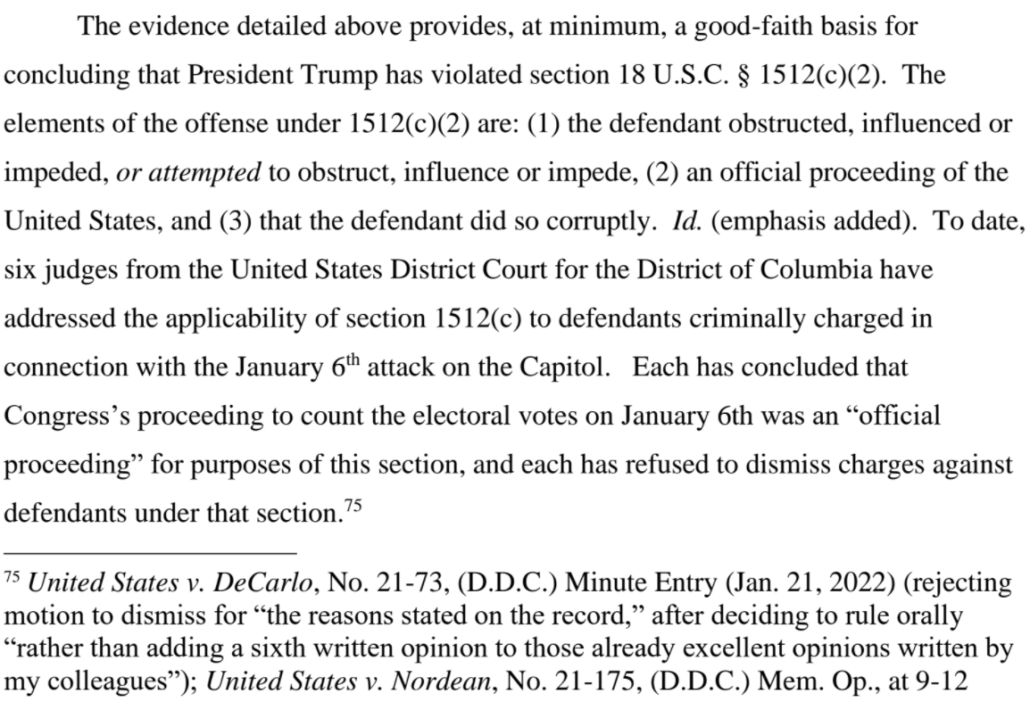 That number is incorrect. As of March 2, at least ten judges had upheld DOJ’s application of 18 USC 1512(c)(2), and a few more have as much as said they would.

When I first made this observation, I thought I was being a bit churlish in making it. But on reflection (and after reading the quotes from lawyers in this Charlie Savage article), I think it’s an important point. All the more so given how TV lawyers have claimed that, because the January 6 Committee has claimed Trump could be charged with obstruction, then damnit DOJ should already have done so.

The fact that the Jan 6 Committee isn’t even aware of all the obstruction rulings suggests they’ve been insufficiently attentive to what the rulings actually say, aside from the baseline holding of all of them that the vote certification was an official proceeding.

While ten judges have upheld the application, there are some differences between these opinions, particularly with regards to their formulation of the corrupt mens rea required by the statute. The most important differences from my review (but I’m not a constitutional lawyer and so I should not be the one doing this analysis!!!!!), are:

Dabney Friedrich argued (and I laid out briefly here) — and has repeatedly warned in pretrial hearings for Guy Reffitt — that as she understand this application it must involve otherwise illegal actions. Amit Mehta ruled (as I wrote up here) that, at least for the Oath Keepers, this corruption may be just intransitive.

On both these issues, the Jan 6 Committee’s argument is a bit muddled. Here’s how they argue that Trump’s actions (and, less aggressively, Eastman’s) demonstrate that corrupt intent.

The Electoral Count Act of 1887 provides for objections by House and Senate members, and a process to resolve such objections through votes in each separate chamber. 3 U.S.C. §§ 5, 6, 15. Nothing in the Twelfth Amendment or the Electoral Count Act provides a basis for the presiding officer of the Senate to unilaterally refuse to count electoral votes — for any reason. Any such effort by the presiding officer would violate hte law. This is exactly what the Vice President’s counsel explained at length to Plaintiff and President Trump before January 6. Plaintiff acknowledge that the Supreme Court would reject such an effort 9-0. And the Vice President made this crystal clear in writing on January 6: [1] any attempt by the Vice President to take the course of action the President insisted he take would have been illegal.

The President and Plaintiff also took steps to alter the certification of electors from various states.

The evidence supports an inference that President Trump and members of his campaign knew he had not won enough legitimate state electoral votes to be declared the winner of the 2020 Presidential election during the January 6 Joint Session of Congress, but [2] the President nevertheless sought to use the Vice President to manipulate the results in his favor.

[T]he President and the Plaintiff engaged in an extensive public and private campaign to convince the Vice President to reject certain Biden electors or delay the proceedings, without basis, so that the President and his associates would have additional time to manipulate the results. [3] Had this effort succeeded, the electoral count would have been obstructed, impeded, influenced, and (at the very least) delayed, all without any genuine legal justification and based on the false pretense that the election had been stolen. There is no genuine question that the President and Plaintiff attempted to accomplish this specific illegal result. [numbering and bold mine]

As I said, I think this is a bit of a muddle. For starters, the Jan 6 Committee is not arguing that the delay actually caused by Trump’s mob amounted to obstruction. Rather, they’re arguing (at [3]) that had Eastman’s efforts to get Pence to himself impose a delay would be obstruction.

They make that argument even though they have evidence to more closely align their argument to the fact pattern ten judges have already approved. The emails included with this filing show Pence Counsel Greg Jacob twice accusing Eastman of convincing Trump of a theory that Trump then shared with his followers, which in turn caused the riot.

[T]hanks to your bullshit, we are now under siege.

[I]t was gravely, gravely irresponsible of you to entice the President of with an academic theory that had no legal viability, and that you well know we would lose before any judge who heard and decided the case. And if the courts declined to hear it, I suppose it could only be decided in the streets. The knowing amplification of that theory through numerous surrogates, whipping large numbers of people into a frenzy over something with no chance of ever attaining legal force through actual process of law, has led us to where we are.

That is, Jacob argued, in real time, that Eastman’s knowingly impossible theory, amplified by the President, caused the riot that ended up putting Pence’s life at risk and delaying the vote certification. But the Jan 6 Committee argues instead that the attempted persuasion of Pence the was the obstructive act.

Perhaps as a result, the agency (transitive versus intransitive) involved in this obstructive act is likewise muddled. In one place (at [1]), the Jan 6 Committee argues that the obstructive act was a failed attempt to persuade Pence to take an illegal action. I’m not sure any of the failed attempts to persuade people to do something illegal (to persuade Pence to do something he couldn’t do, to persuade members of Congress to challenge the vote with either good faith or cynical challenges, to persuade Jeffrey Clark to serve as Acting Attorney General) would sustain legal challenges.

If the Commander in Chief ordered his Vice President to take an illegal act, that would be a bit different, but that’s not what the Jan 6 Committee argues happened here.

Elsewhere, this filing (and other attempts to apply obstruction to Trump) point to Trump’s awareness (at [2]) that he lost the election, and so his attempts to win anyway exhibit an intransitive corrupt intent.

As Charlie Savage noted in his story and a thread on same, to some degree the Jan 6 Committee doesn’t need to do any better. They’re not indicting Trump, they’re just trying to get emails they will likely get via other means anyway (and as such, the inclusion of this argument is significantly PR).

But to the extent that this filing — and not, say, the opinion issued by Judge Mehta after he had approved obstruction, in which he both ruled it was plausible that Trump had conspired with two militias and, more importantly (and to me, at least, shockingly), said it was also plausible that Trump may be liable under an aid and abet standard — is being used as the model for applying obstruction to Trump, it is encouraging a lot of unicorn thinking and, more importantly, a lot of really sloppy thinking. There are so many ways to charge Trump with obstruction that don’t require an inquiry into his beliefs about losing the election, and those are the ones DOJ has laid a groundwork for.

Plus, there are a few more realities that TV lawyers who want to talk about obstruction should consider.

First, it is virtually guaranteed that Friedrich’s opinion — the one that holds that “corrupt” must involve otherwise illegal actions — will be the first one appealed. That’s because whatever happens with the Guy Reffitt trial this week and next, it’s likely it will be appealed. And Reffitt has been building in an appeal of Friedrich’s obstruction decision from the start. First trial, first appeal. So TV lawyers need to study up what she has said about otherwise illegal action and lay out some rebuttals if their theory of Trump’s liability involves mere persuasion.

Second, while ultimately all 22 judges are likely to weigh in on this obstruction application (and there are only two or three judges remaining who might conceivably rule differently than their colleagues), there are just a handful of judges who might face this obstruction application with Trump or a close associate like Roger Stone or Rudy Giuliani. Judge Mehta (by dint of presiding over the Oath Keeper cases) or Judge Kelly (by dint of ruling over the most important Proud Boy cases) might see charges against Roger Stone, Rudy Giuliani, or Alex Jones. Chief Judge Howell might take a higher profile case herself. Or she might give it to either Mehta (who is already presiding over closely related cases, including the January 6 lawsuits of Trump) or one of the two judges who has dealt with issues of Presidential accountability, either former OLC head Moss or Carl Nichols. Notably, Judge Nichols, who might also get related cases based on presiding over the Steve Bannon case, has not yet (as far as I’m aware) issued a ruling upholding 1512(c)(2); I imagine he would uphold it, but don’t know how his opinion might differ from his colleagues.

The application of 18 USC 1512(c)(2) to January 6 is not, as the TV lawyers only now discovering it, an abstract concept. It is something that has been heavily litigated already. There are eight substantive opinions out there, with some nuances between them. The universe of judges who might preside over a Trump case is likewise finite and with the notable exception of Judge Nichols, the two groups largely overlap.

So if TV lawyers with time on their hands want to understand how obstruction would apply to Trump, it’d do well — and it is long overdue — to look at what the judges have actually said and how those opinions differ from the theory of liability being thrown around on TV.

I’m convinced not just that Trump could be prosecuted for obstruction, but that DOJ has been working towards that for some time. But I’m not convinced the current January 6 Committee theory would survive.

The Timing of the Jack Hanick Prosecution Security Saturday