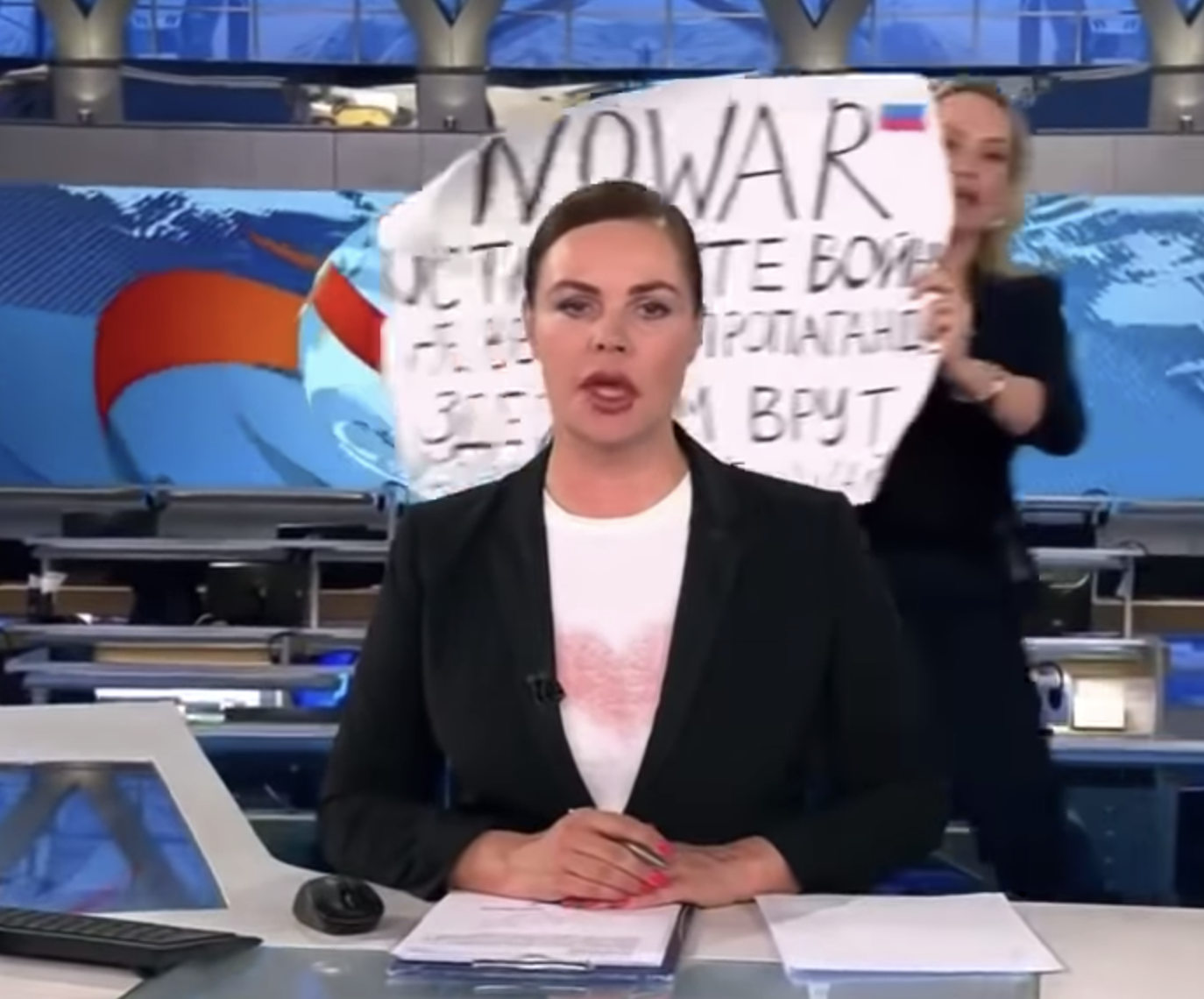 Yesterday, an editor at Russia’s official Channel One news, Marina Ovsyannikova, came onto a live broadcast and held up a sign condemning Russia’s war on Ukraine.

Predictably, she was quickly detained; thus far, her attorneys have been unable to locate her (though one outlet has said she’ll be charged under Russia’s new crackdown law).

Shortly after her detention, a pre-recorded video was released, in which she explained her actions. She spoke of the shame she feels about her past involvement in Putin’s lies.

What is happening right now in Ukraine is a crime and Russia is the aggressor. And the responsibility for this aggression lies on the conscience of only one person. This man is Vladimir Putin. My father is Ukrainian. My mother is Russian. And they were never enemies. And this necklace on my neck is a symbol of the fact that Russia must immediately stop the fratricidal war and then our brotherly peoples will still be able to reconcile.

Unfortunately, in recent years I have been working on Channel One, working for Kremlin’s propaganda. And I am very ashamed of it. I am ashamed that I was letting them tell those lies from the screen. I’m ashamed that I allowed to “zombify” the Russian people.

We kept silent in 2014, when all this was just in the beginning. We didn’t go to rallies when the Kremlin poisoned Navalny. We just silently watched this inhumane regime.

And now the whole world has turned away from us, and even 10 generations of our descendants will not be enough to wash away the shame of this fratricidal war. We are Russian people — thoughtful and smart. It’s up to us to stop this madness. Come out to rallies. Don’t be afraid of anything. They can’t imprison all of us.

It was an incredibly brave — and because she planned her actions in advance — well-executed protest.

But make no mistake. Ovsyannikova is not, like another brave journalist who spoke up this week, Yevgenia Albats, someone who has criticized the regime in the past, someone whose witness now is a continuation of years of brave reporting.

Rather, Ovsyannikova is someone who, a profile describes, “was a cog in a big machine of Channel One’s news production.” She was part of the the production of official truth. And as she describes, hers is the lesson of regret for that complicity, someone who will forever own a part of Putin’s crimes because she took the comfortable route of contributing to and participating in Putin’s exercise of power. She will almost certainly pay a stiff price for her speech, but she is also someone who did nothing, up till now, as Putin kept raising the price of speaking freely.

And like Ovsyannikova, they are doing nothing to rebut the lies of authoritarianism before it’s too late.

Update: Ovsyannikova has surfaced and is thus far facing only administrative crimes, so days, not years, in jail.

Update: Ovsyannikova was fined 30,000 rubles and released, but that apparently only covers the social media video, not the protest on TV.