It’s Day Two of U.S. Senate Judiciary Committee’s four days of confirmation hearings on the nomination of Judge Ketanji Jackson Brown to the Supreme Court. The hearing was scheduled to begin at 9:00 a.m. this morning; we are catching it here in progress.

You can watch live feed at these sites (not the same links as yesterday’s as the previous links may lead to recordings of Day 1):

You can also catch the hearings through these live Twitter threads:

Brace yourselves for three more things.

Let’s be clear, Sen. Graham knew LAST YEAR WHEN HE VOTED TO CONFIRM HER FOR THE US COURT OF APPEALS FOR THE D.C. CIRCUIT about Judge Jackson’s prior work as a federal public defender, her affiliations, her opinions, her positions on issues, etc.

Spare me his drama this morning.

Judge Jackson was eminently qualified three times but now suddenly unqualified based on the credentials which helped her earn her previous federal appointments?

Right-wing media outlet had assured their audience yesterday about these hearings:

Oh no, honey — these hearings won’t be a circus. They’ll be a live dramatic production.

Senator Lindsey Graham swiveled in his chair, grabbed his bottle of Coca-Cola, and stormed out of the Supreme Court confirmation hearing for Judge Ketanji Brown Jackson.

What a pity there aren’t awards given for supporting actors in a nomination hearing production.

Senator John Cornyn can’t let Graham’s act go unanswered. Nope, he needed to go after the gays because as you have surely noticed our so-called traditional marriages have all ruptured since teh gays were legally able to marry.

Sen. John Cornyn’s questions to Judge Ketanji Brown Jackson make it clear that 1. Republicans are still hung up on gay marriage and 2. still hopeful that SCOTUS will reverse Obergefell pic.twitter.com/VFLDMTrBIC

Damn it all, I forgot to get a lawyer and divorce my spouse back in 2015 after Obergefell v. Hodges destroyed the institution of marriage between straight people.

SCOTUS didn’t make law though Cornyn wants the GOP base to believe it did.

As @JohnCornyn complains about the Supreme Court’s gay marriage decision being “court-made law” that went against the will of local people, just remember that’s the *exact* same argument segregationists made about Brown v. Board of Education. 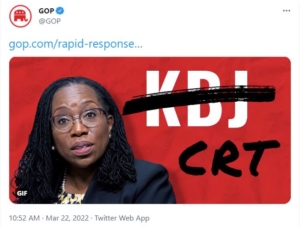 Unsurprising, really; the GOP has no real platform, no substance, no policies except thinly masked oppression of more than half the country who are not xenophobic cis-het white Christians. They’re clinging to the lessons their ratfucking forebears taught them:

You start out in 1954 by saying, “N*gger, n*gger, n*gger.” By 1968 you can’t say “n*gger”—that hurts you. Backfires. So you say stuff like forced busing, states’ rights and all that stuff. You’re getting so abstract now [that] you’re talking about cutting taxes, and all these things you’re talking about are totally economic things and a byproduct of them is [that] blacks get hurt worse than whites. And subconsciously maybe that is part of it. I’m not saying that. But I’m saying that if it is getting that abstract, and that coded, that we are doing away with the racial problem one way or the other. You follow me—because obviously sitting around saying, “We want to cut this,” is much more abstract than even the busing thing, and a hell of a lot more abstract than “N*gger, n*gger.”

Instead of busing they now talk non-stop about critical race theory (CRT), how it’s being forced on them even though they can’t explain what it is or provide any evidence it’s part of K-12 public school curriculum (it’s not). They don’t shy away from states’ rights now, claiming states have the right to remove content from schools which makes white people feel bad.

It’s overt racism with the sheerest of veils.

The GOP is following the script laid out by Chris Rufo, the guy who created the influence operation built on the university-level coursework offered to law students in which the economics of race and its historic and contemporary affect on laws and democratic society are discussed.

Now CRT is the right-wing’s bogeyman. Rufo literally laid out the approach via Twitter last Thursday:

Ketanji Brown Jackson is a lifelong admirer of the father of critical race theory, Derrick Bell, who wrote that the Constitution was like “roach powder,” that whites might commit “racial genocide,” and that his motto was “I live to harass white folks.” pic.twitter.com/fhGEf0kFk0

In short, it’s what the GOP now yells every time it wants to invoke a fear response from its white supremacist base: OMG CRT CRT CRT!!!

I can’t believe we have to wade through two more days of this racist and misogynist crap. Nor can I believe we still don’t know who owns beer-loving Justice Brett Kavanaugh.