John Durham Is Likely to Supersede the Michael Sussmann Indictment 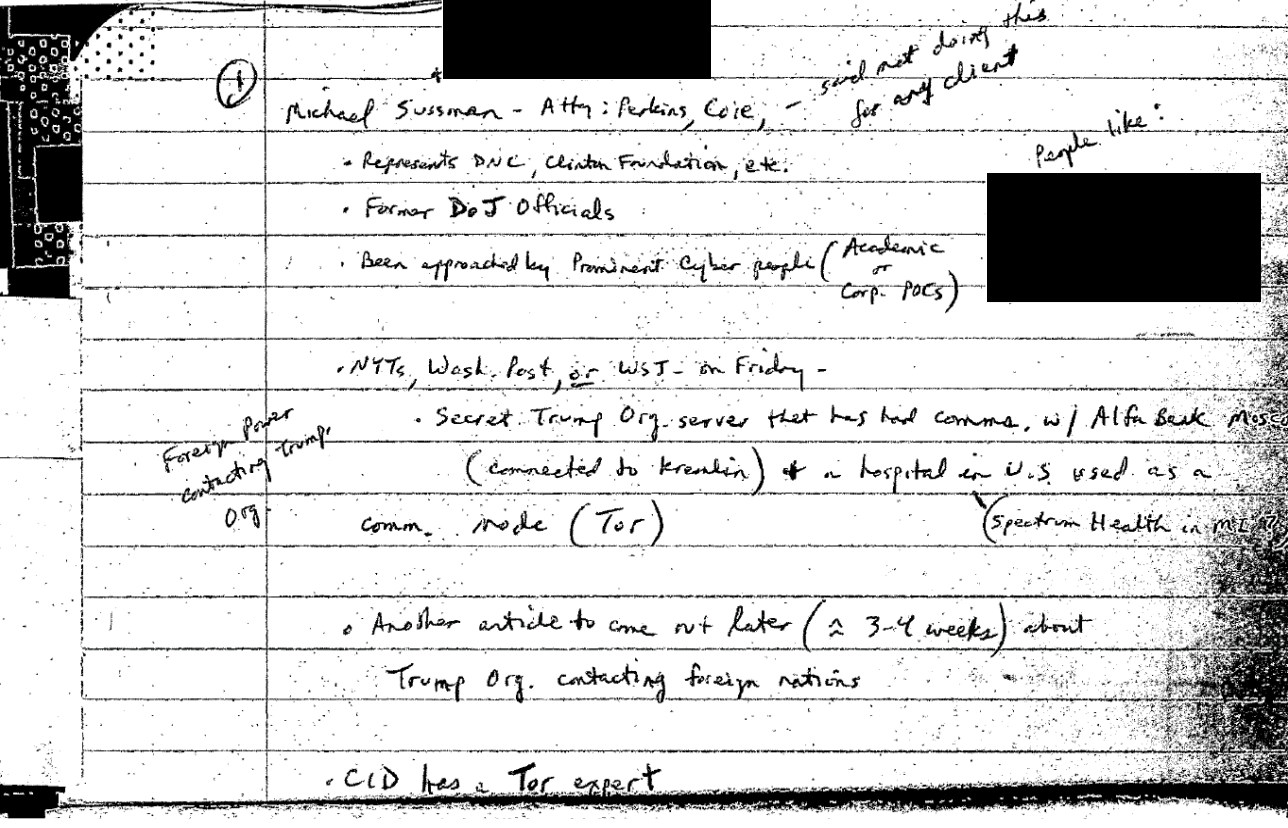 On Monday, both John Durham and Michael Sussmann submitted their motions in limine, which are filings to argue about what can be admitted at trial. They address a range of issues that I’ll cover in several posts:

I will link my discussions in serial fashion.

In his motions in limine submitted Monday, John Durham included a text Michael Sussmann sent to James Baker that he belatedly discovered on the Baker phone he never bothered to look for.

Jim – it’s Michael Sussmann. I have something time-sensitive (and sensitive) I need to discuss. Do you have availibilty for a short meeting tomorrow? I’m coming on my own – not on behalf of a client or company – want to help the Bureau. Thanks. (emphasis added).

The text seems really damning — and both Charlie Savage and the frothers have treated it as such.

But it creates one real problem and may not help as much as they assume.

That’s true, first of all, because Durham accused Michael Sussmann of lying to James Baker on September 19. He did not accuse him of lying on September 18. Every single witness Durham is relying on to prove this lie either doesn’t remember Baker relaying that Sussmann had claimed at the meeting not to be representing a client (as is the case for Bill Priestap and Trisha Anderson), or has given wildly conflicting testimony about it (as is the case for Baker). Durham can’t rule out that Sussmann did not repeat that claim at the meeting on September 19. And, indeed, that might explain why Baker’s testimony conflicted so wildly and also might explain why Priestap’s notes recording “said not doing this for client” (note the apparent strike-out; h/t ML) appears to have been written after the fact. 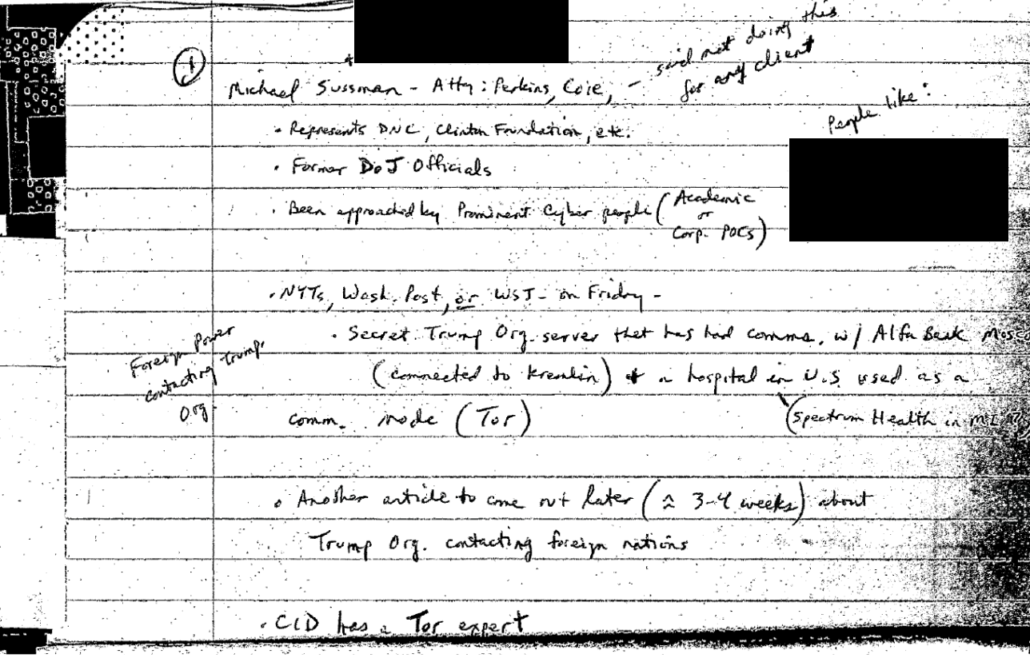 Indeed the Priestap and Anderson notes Durham is fighting to rely on support an inference that the meeting emphasized the motive Sussmann said he had — to help the FBI. Both prominently focus on the upcoming NYT story, which is what Sussmann explained, in sworn testimony to HPSCI, he went to warn Baker about: that there would be an upcoming story that might be awkward for the FBI.

Q And when did that conversation occur on or about?

Q And what did Mr. Baker advise you to do?

A Advise me to do?

Q Yeah. Or what was what did he – how did he respond to the information that you conveyed to him?

A He said thank you.

Q Did he offer any follow-on

Q engagements, or did he promise that he would pass it on?

A But to be clear, I told him I didn’t want any. I mean, I was sharing information, and I remember telling him at the outset that I was meeting with him specifically, because any information involving a political candidate, but particularly information of this sort involving potential relationship or activity with a foreign government was highly volatile and controversial. And I thought and I remember telling him that it would be a not-so-nice thing ~ I probably used a word more stronger than “not so nice” – to dump some information like this on a case agent and create some sort of a problem. And I was coming to him mostly because I wanted him to be able to decide whether or not to act or not to act, or to share or not to share, with information I was bringing him to insulate or protect the Bureau or — I don’t know. just thought he would know best what to do or not to do, including nothing at the time.

And if I could just go on, I know for my time as a prosecutor at the Department of Justice, there are guidelines about when you act on things and when close to an election you wait sort of until after the election. And I didn’t know what the appropriate thing was, but I didn’t want to put the Bureau or him in an uncomfortable situation by, as I said, going to a case agent or sort of dumping it in the wrong place. So I met with him briefly and

Q Did you meet — was it a personal meeting or a phone call?

A At the FBI. And if I could just continue to answer your question, and soI told him this information, but didn’t want any follow-up, didn’t ~ in other words, I wasn’t looking for the FBI to do anything. I had no ask. I had no requests. And I remember saying, I’m not you don’t need to follow up with me. I just feel like I have left this in the right hands, and he said, yes.

And FBI availed themselves of the help Sussmann offered, asking and getting him to share Eric Lichtblau’s name, thereby giving the FBI an opportunity to kill the story that Sussmann had directly seeded.

Q The conversations you had with the journalists, the ~

A Oh, excuse me. I did not recall a sort of minor conversation that I had with Mr. Baker, which I don’t think it was necessarily related to the question you ‘asked me, but I just wanted to tell you about a phone call that I had with him 2 days after I met with him, just because I had forgotten it When I met with him, I shared with him this information, and I told him that there was also a news organization that has or had the information. And he called me 2 days later on my mobile phone and asked me for the name of the journalist or publication, because the Bureau was going to ask the public — was going to ask the journalist or the publication to hold their story and not publish it, and said that like it was urgent and the request came from the top of the Bureau. So anyway, it was, you know, a 5-minute, if that, phone conversation just for that purpose.

Q Okay. So the FBI then — so, at some point, the FBI was very concerned about that actually appearing in the New York Times. Is that correct?

A Yes, yes. My understanding is they —

Q Did he explain why they were so concerned?

All the discussions about materiality should include the decision that FBI made: not just to open an investigation or not, but also to intervene and kill a damaging story about Trump.

This is one reason that April Lorenzen’s largely independent efforts to push this story (which Durham treats as part of the same conspiracy) are important. Because Sussmann’s efforts actually had the opposite effect of what Durham claims he wanted, a big story to sway the election.

Durham has an easy fix to his first problem though: He can simply supersede the indictment.

If I were him, especially if I were as much of a douchebag as he has been, I’d wait until after Christopher Cooper rules on the motions in limine to supersede, tailoring the charges that Durham will have to prove to those decisions.

Indeed, that may be one reason Sussmann cheekily submitted a redlined indictment as it would appear without all Durham’s conspiracy theorizing: to get Cooper to rule in on what a reasonable indictment would look like.

In any case, because that text creates temporal problems with the most compelling evidence that Durham has, I expect he’ll supersede the indictment before trial.

Update: Charlie Savage noted to me, persuasively, that the statute of limitation has expired on charging Sussmann with lying on September 18. I still would not be surprised if Durham attempted to fix this error by superseding, perhaps by adopting “on or about” language. But if Durham can’t include September 18 in his indictment, he may have a real problem.

Update: A reader notes that Durham’s filing claims that U.K. Person-1 — Christopher Steele — is referred to in the indictment.

For example, in the summer of 2016, the defendant met in Law Firm-1’s offices with the author of a now well-known dossier regarding Trump (referred to in the Indictment as “U.K. Person-1”) and personnel from the U.S. Investigative Firm.

He’s not in the known Sussmann indictment, as Sussmann notes in his counterpart filing.

The Special Counsel also indicated during a telephone conference on March 11, 2022 that he intends to introduce evidence and argument pertaining to reports and information that Christopher Steele separately provided to the FBI—i.e., the so-called “Steele Dossier.” Not only that, but the Special Counsel also produced witness statements for Mr. Steele pursuant to 18 U.S.C. § 3500, presumably because the Special Counsel seeks to call Mr. Steele as a witness at trial. However, the Indictment contains no reference to Mr. Steele or the inflammatory Steele Dossier. The Indictment similarly contains no allegations—nor is there any evidence of—Mr. Sussmann’s knowledge, awareness, or involvement in any of Mr. Steele’s efforts to provide information to the government.

I wonder if Durham asked to file the conspiracy charges he’s been pursuing between March 18 and March 23, but was denied, after which he filed his delayed 404(b) notice pertaining to Steele and Joffe.