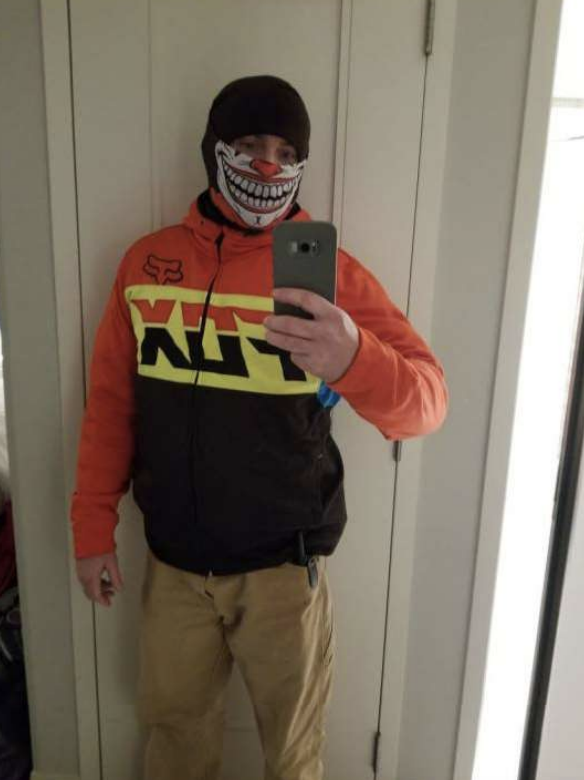 The biggest publicly known fuck-up of the January 6 investigation thus far is when DOJ lost Lucas Denney. He’s the self-described President of the North Texas Patriot Boys. He was arrested in December with Donald Hazard and charged in another militia-related conspiracy.

Their conspiracy is interesting for several reasons:

Hazard was charged for wrestling with some cops on the stairs under the scaffolding, which ended up knocking out one of them. Denney was grappling with cops for some time, and ultimately had a hand in pulling Michael Fanone into the crowd.

DENNEY then turned towards Officer M.F., swung his arm and fist at M.F., and grabbed M.F., pulling him farther down the stairs, as depicted below. DENNEY then himself fell backwards into the crowd. In the images below, DENNEY is circled in red; Officer M.F. is circled in yellow.

The FBI started investigating these guys from day one. By April, the government had obtained both men’s Facebook accounts. They were finally arrested on December 13. He was ordered detained by a magistrate judge in Texas. It took the Marshals until January 31 to get him to DC.

Just days earlier, Denney’s case had been moved from AUSA Benet Kearney to Jennifer Rozzoni. Between some confusion about when Denney’s initial appearance in DC would be, the shift of prosecutors, and the crushing schedule that both John Pierce and Rozzoni have, they simply never got his initial appearance scheduled. Around then, William Shipley, the far more competent attorney who does the actual lawyering for the Pierce boondoggle, joined the case and immediately started filing for release based on how long DOJ had left him sitting in DC.

On March 7, DOJ obtained a one count assault indictment against Denney alone based on his assault of a different cop, not Fanone, mooting some of the legal basis for his release. Then Shipley, thinking he was getting cute, advised his client to plead guilty to that charge as a way to stave off all the other conspiracy charges he was facing. As a result, Denney pled guilty right away to an assault charge that could get him 71 months. While his exposure on January 6 is probably eliminated with the guilty plea, it’s not for any plotting he did afterwards.

When he pled, Rozzoni was very careful to enter into the record how much of discovery Denney’s attorneys had seen and what they may not have when advising him to plead.

Losing Denney — a very-well connected militia member accused of assaulting cops — was a colossal mistake, though Shipley’s tactics saved the government from having to release him. It seemed, at the time, to be a symptom of just how overloaded the January 6 investigation has made DOJ.

And while that’s surely part of it, subsequent events make it clear that something else was going on at the time.

First, some details about grand juries. When the government is charging people with misdemeanors, they don’t need to get an indictment from a grand jury. But felonies require presenting the evidence to a grand jury.

When grand juries expire, DOJ can’t just tell a new grand jury about what the other grand jury did. They have to present all the evidence anew.

When people have asked whether DOJ will open a grand jury to investigate Trump, I have responded that they already had a grand jury. In fact, I noted, they had used at least five by the turn of the year. But as my lists below make clear, not all those grand juries were the same. Virtually every single important case — all the conspiracies, all the most important assault cases (both for import of victim or size), and most of the other cases — were presented to a grand jury seated on January 8, two days after the riot. (These lists are very incomplete but I will update them going forward.)

Most spectacularly, the relentless Oath Keepers conspiracy kept going back to the same grand jury superseding the initial charges, on February 19, 2021 (S1), on March 12 (S2), on March 31 (S3), on May 26 (S4). Then they started flipping people. Then they kept superseding, on August 4 (S5), on December 1 (S6), until, on January 12, 2022, just 369 days after the grand jury started investigating, the case split into several interlocked conspiracies, one of them charging Stewart Rhodes and others with seditious conspiracy. On March 2, DOJ got their first guilty plea to seditious conspiracy, from Joshua James, who not only knew what Rhodes was doing the day of the riot, but also knew (and reported back on) what Roger Stone was doing.

But even while that grand jury was marching relentlessly towards charging Rhodes with sedition, it was also charging the majority of hundreds of other January 6 defendants.

The Proud Boy march has not been that focused. While all the initial Proud Boy conspiracies were charged by the same group of anonymous private citizen who would ultimately charge Rhodes with sedition, when necessary, DOJ would use another grand jury with the Proud Boys as well. The Front Door conspiracy was first superseded by a January 11 grand jury (which might be the regularly seated one, but which picked up a lot of the flood in that period). When DOJ superseded Nick DeCarlo’s conspiracy with Nick Ochs, they used a grand jury seated on November 10.

The government seemed to use a regular May 25 and August 11 for similar necessities. But when the government wanted to charge Ronnie Sandlin and Nate DeGrave in a conspiracy, they waited for months — from April until September, a month and a half after Josiah Colt had flipped on them — to present it to that January 8 grand jury.

The point I’m trying to make is that, for that relentless year while that grand jury was finalizing the sedition charges, it also charged almost all major January 6 felonies. That group of two dozen anonymous Americans saw all of this.

I’m still testing this, but it appears that after its non-stop year of indicting insurrectionists, the last thing the January 8 grand jury may have done was charge the seditious conspiracy. Before February 14, other January 6 indictments (MacCracken, AJ Fischer, and Bilyard, for example) were handled by the August 11 grand jury. Then after February 14, new January 6 indictments (like Beddingfield, Johnson, and Bingham) were done by the November 10 grand jury.

DOJ ended their first grand jury with sedition. They opened their second grand jury with Tarrio — who may or may not have known about the riot before Trump announced it.

Update, May 6: In response to a Zach Rehl request for the exhibits the government will use in its case in chief against the Proud Boys, DOJ points to what must be how they read over the evidence from the one grand jury to the other:

In the meantime, the government has turned over information and materials that provide a clear roadmap regarding the government’s anticipated case-in-chief. Specifically, following the return of the Second Superseding indictment, the government turned over to defense counsel a 160-page grand jury transcript, with exhibits, and a detailed 96-slide PowerPoint presentation containing the evidence supporting the charges against the defendants.

Bill Barr’s Legal Exposure May Lead Him to Lie about the Hunter Biden... Two Possible End Games in Ukraine