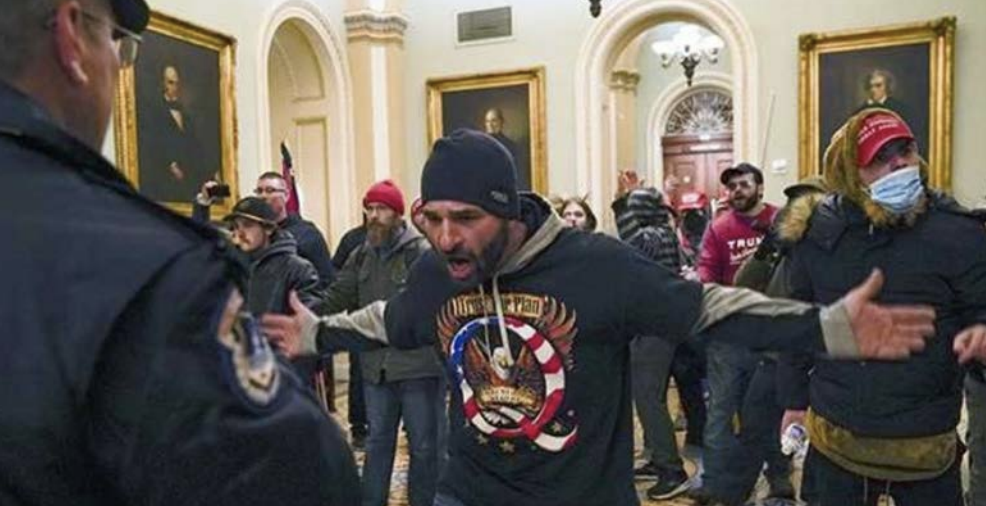 Last May, I observed that QAnon had far more evident success in getting its adherents in places to obstruct the vote certification on January 6, 2021 than the organized militias did.

QAnon managed to get far more of their adherents to the Senate floor than either the Proud Boys (Joe Biggs and Arthur Jackman showed up after getting in with the help of people inside) or the Oath Keepers (Kelly Meggs and Joshua James showed up too late). QAnon held a prayer on the dais while the militias were still breaching doors.

While he didn’t make it to the Senate floor, that’s true, in part, because of the fervor with which QAnoner Doug Jensen sprinted up the stairs after Officer Eugene Goodman (though Jensen’s fervor was also one of the things that Goodman exploited to buy time to evacuate the Senate).

According to an FBI interview Jensen did just days after the insurrection (the transcript was released as part of a suppression motion that is unlikely to work), that was his stated intent.

He wanted QAnon to get credit for breaching the Capitol.

I wanted Q to get the attention.

A. And that was my main intention basically —

A. — was to use my shirt. I basically intended on being the poster boy, and it really worked out.

The transcript is a tough read. It reveals (as the court filings associated with many of the January 6 defendants do) the urgency with which the US needs to address mental health treatment. It reveals how Trump’s propagandists won the allegiance of a blue collar union member who had previously voted Democratic.

But most vividly, it reveals how Jensen got radicalized into QAnon. And that started — as he repeatedly describes — from the files stolen from John Podesta released by WikiLeaks in advance of the 2016 election. He planned to vote for Hillary (!!!) until he came to believe the misrepresentations he read (pushed, in significant part, by accused Proud Boy leader Joe Biggs) of the Podesta files. When the flow of Podesta files ended, Jensen was left with a void, which Q drops filled shortly thereafter. After that, Jensen came to believe Trump’s lies that he had been shafted by the Deep State, by some guy (Peter Strzok) and his girlfriend whose name he couldn’t remember. Perhaps as a result, Jensen came to believe of Putin that, “this guy don’t seem so bad, you know.”

Also, Q said — Q has said things, okay, so like — and anonymous, okay. I follow that, Mayjan (ph.) and all that stuff, you know, because basically I was not into politics until the Wiki leaks dropped, and then when I realized about Haiti, and the Clinton Foundation, and the kidnappings all through the Clinton Foundation, and then I learned about Epstein Island and then I learned Mike Pence owns an island, right — or not Mike Pence, Joe Biden owns an island next door, and then I find that Hunter Biden and Bris Moldings (ph.) and all that, I knew about that a year or two ago.

It all started with all the crap I found out about Hillary Clinton, John Podesta, you know, all of that stuff, and then so right before I was going to vote for Hillary, I was like, whoa, we’ve got to vote Trump in because we can’t have Hillary. And then I start finding things like we were supposed to be dead by now, and if Hillary would have won, we were going to be attacked by North Korea or Iran. We were going to go to war, and we would most likely — half of us wouldn’t be here right now if Trump wouldn’t have won that election is what I got from it.

You guys have an FBI thing that you released all that Ben Swan who was on ABC years ago and he tried to expose pizza gate and he got fired that night from ABC, and he works for RT now.

I am for America, and I feel like we are being taken over by communist China, you know, and the whole Russian collusion was fake. I don’t know what the deal with Russia is, but I don’t know, Vladimir Putin, he seems to be like a decent person, but I could be crazy, you know. But I think we were taught from a young age to hate Russia and all of this stuff. I’ve researched on Vladimir Putin. I was like this guy don’t seem so bad, you know, but I don’t know, you know.

A. And all this information, and Trump’s taking down all these people, you know? And — well, firing them or whatever, you know? Like Brennan, Clapper, you know, that guy that I hate with his girlfriend, I can’t remember their names. Those texting back and forth. But they were all like top, you know, members, they’re high up and stuff.

A. And you saw that they were out to destroy Trump, and they were members of our, you know, Central Intelligence or our FBI, you know?

I did not preplan nothing. I am not a leader. I am just a hardcore patriot. I am a diehard — I believe all this stuff to be true, and I feel like Trump’s just got the absolute shaft from everything around, our own government, the media.

So I voted both terms for Obama, and during the presidency, I thought he was a great president. The health thing. The health thing didn’t benefit me and my family because I had union health insurance. So I got no benefits from it, but I was happy that all those people got insurance, you know? And so I was happy with him. And then I was going to vote for Hillary because I’ve been a democrat my whole life.

A. And then the WikiLeaks thing happened and I had to start questioning where I was getting my info from. And that’s when I realized, you know, holy cow, I can’t vote for this woman. And then it became — like I started telling everybody I know about WikiLeaks and everything else back then. And then that died off when Trump won. And then I didn’t really have anything. I was happy Trump won, you know? And then all of a sudden Q drops started. And it was just — that’s all I did —

After that radicalization process — Jensen described to the FBI — he readily responded to the propagandists trying to help Trump steal an election: Lin Wood, Sidney Powell, and Rudy Giuliani, as well as the December 19, 2020 Trump tweet that arose out of their machinations. And so he drove all night from Iowa to answer Trump’s call.

Q. How’d you find out about the rally?

A. Well, I found out from the rally from all the different people I follow.

A. Which — so like — I’m not saying it’s JFK, Jr., but one of the people I follow on Twitter, his name’s John F. Kennedy, Jr., and then Linwood. Linwood’s new. Like everything Linwood has dropped in the last couple weeks is old news, like that’s all old new to me, and so Linwood got me fired up, Sidney Powell got me fired up. Rudy Giuliani got me fired up, you know, and then I go to this Trump rally and I was just hoping it was show time basically, and then he gets done with this rally and I’m just kind of like — he’s like, oh, let’s all go march down peacefully, you know. He didn’t tell us to go storm the building, okay.

A. Trump’s posts. Trump posted make sure you’re there, January 6 for the rally in Washington, D.C., I’ll have some great info, and so that to me was, oh, here it comes, because — and then, you know, all he said, well, where’s Hillary? Well, where? I already know that. Q said where’s Hillary four months ago, you know, so I was kind of like that’s all you got, where’s Hillary? You know, he — and then he got us all fired up to go to that White House, and then it just all happened so quick and I just wanted to make sure that I wanted to be in the front. Basically I wanted to get that Q shirt the attention —

There are few better summaries of the damage done by the sustained information operations that both Russia and Trump pursued — with the Burisma attacks, at least, provably in coordination — over the last six years. The self-described poster boy for the insurrection got there as a result of a sustained series of information operations that started with Russia’s attempt to tamper in the 2016 election.

Only, Doug Jensen makes it clear: Russian didn’t just tamper in the election. It tampered with the American psyche.

Two Possible End Games in Ukraine Sedition Is the Foundation on Which the Trump Associate Investigation Build...