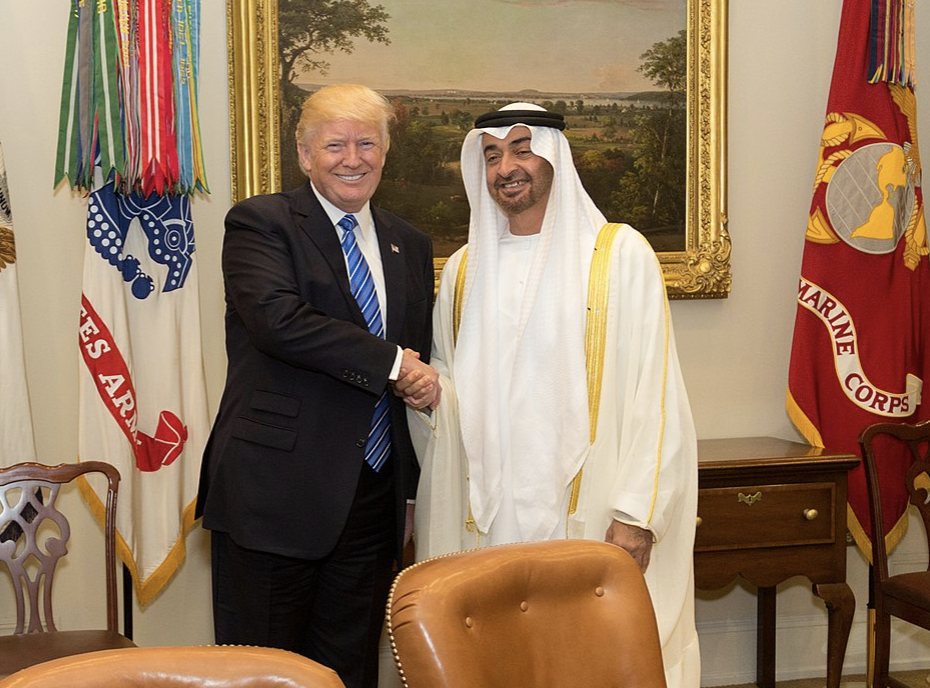 In this post, I described the import of the false statement and obstruction charges against Tom Barrack. While Barrack may have been honest about his ties to the Emirates in a 2017 interview with Robert Mueller’s prosecutors, he is accused of lying about those ties in 2019, which — if DOJ has the goods on those later lies — will make it clear he was affirmatively hiding his role at that point.

[A]ssuming the FBI didn’t charge a billionaire with false statements without having him dead to rights on the charges, by June 2019, the FBI foreclosed several of the defenses that Barrack might offer going forward: that he was doing all this as a legal commercial transaction (which is exempt from the foreign agent charges) or that he wasn’t really working for UAE, he just thought the alliance really served US interests and indulged the Emiratis by referring to MbZ as “boss.” By denying very basic things that the FBI appears to have records for, then, Barrack made it a lot harder to argue — in 2021 — that’s there’s an innocent explanation for all this.

This case will sink or swim on the strength of the false statements charges, because if Barrack’s alleged lies in June 2019 were clearcut, when he presumably believed he would be protected by Barr and Trump, then it makes several likely defenses a lot harder to pull off now.

The government made the same argument in a filing last month responding to Barrack’s motion to dismiss: If Barrack did not know his back channel with the Emirates was a problem, why did he (allegedly) lie about it?

Although not dispositive to Barrack’s vagueness challenge, if Barrack actually believed that he had done nothing wrong, it is unclear why he allegedly lied to FBI special agents during his voluntary June 20, 2019 interview as set forth in Counts Three through Seven of the Indictment.

It’s now clear that Barrack’s alleged false statements are even more important than that. 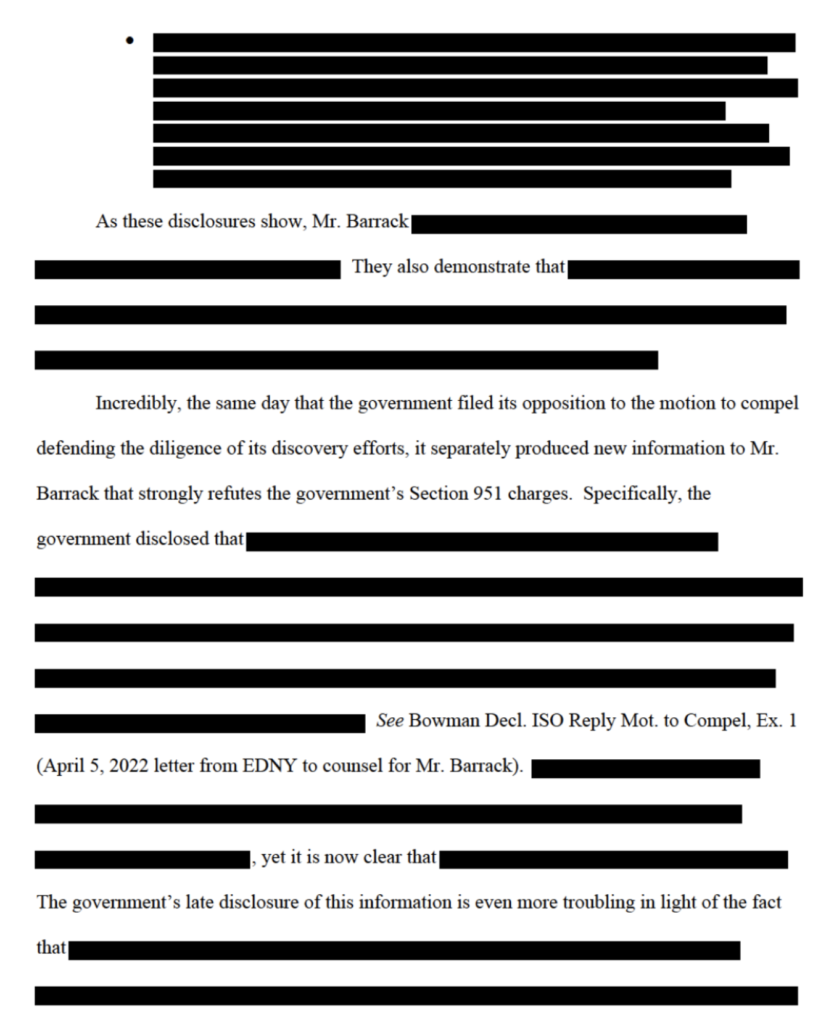 That’s because Barrack is now arguing that, because the Trump Administration approved of how Barrack was peddling US policy to the Emirates, Barrack could not have been a secret foreign agent under 18 USC 951.

That revelation has slowly become clear over the course of a dispute over discovery (motion, response, reply) pertaining to Barrack’s demand, among other things, for, “all communications between Mr. Barrack and the Trump Campaign and Administration regarding the Middle East.”

In the government’s response, they note that 18 USC 951 requires notice to the Attorney General, not to members of a private political campaign.

The defendants argue that evidence of Barrack’s disclosure of his UAE connections to members of the Trump Campaign are exculpatory. But Section 951 requires notice to the Attorney General, not to private citizens affiliated with the Trump Campaign. See 18 U.S.C. § 951(a). This makes sense, since the Attorney General is the official charged with enforcing the law and the senior official in charge of the FBI, the agency responsible for investigating and responding to unlawful foreign government activity inside the United States. By contrast, members of the Trump Campaign have no such responsibilities with respect to the internal national security of the United States and had no authority to sanction or bless the defendants’ illegal conduct. They are not government officials, and even if they were, they are not the Attorney General or a representative thereof.

According to the indictment, Paul Manafort not only knew that Barrack was working for the Emirates, but was cooperating with Barrack’s efforts.

In Barrack’s reply, after a heavily redacted passage, he complains about DOJ’s claim — made in the press conference announcing his arrest — that he had deceived Trump about what he was doing.

The government’s position is particularly astonishing in light of its public claim at the time of Mr. Barrack’s arrest that he had deceived Mr. Trump and the administration. Specifically, the then-Acting Assistant Attorney General for the National Security Division announced that the “conduct alleged in the indictment is nothing short of a betrayal of those officials in the United States, including the former President,” and that this indictment was needed to deter such “undisclosed foreign influence.” [citation removed] In that same press release, the Assistant Director in Charge of the FBI NY Field Office asserted that the indictment was about “secret attempts to influence our highest officials.” Id. When Mr. Barrack raised concerns with the government about these false statements in the press release, the government responded that these statements were a fair representation of the conduct alleged in the indictment. [citation removed] Thus, in one breath the government claims that Mr. Barrack deceived Mr. Trump and the administration and that such evidence is part of its case, but in the next breath contends that contrary evidence is neither relevant nor exculpatory and apparently withheld such discovery on that basis.

Barrack’s lawyers include the 2021 comments about whether Trump knew of all this as exhibits, but more recent correspondence about it remains sealed.

In other words, Barrack seems to be arguing, he didn’t betray Trump; Trump wanted him to cater American foreign policy to rich Gulf Arab nations.

Barrack spends four pages of his reply making the same kinds of complaints about the documentation of his 2019 FBI interview that Mike Flynn made in 2020, even complaining that the fact that the AUSAs prosecuting the case were in the room makes them conflicted on the case. It’s clear why he did so: because if Barrack did lie to an FBI run by Trump’s appointed FBI Director and ultimately overseen by Bill Barr in 2019, then he was continuing to hide his influence-peddling from the one person that mattered under the law, Bill Barr (though given what we know of Barr’s interference in Ukraine investigations, I would be unsurprised if Barr knew that Trump knew of Barrack’s ties to the Emirates, which would explain why he swapped out US Attorneys in EDNY at the time).

Remember: Barrack is alleged to have been pursuing policies pushed by Mohammed bin Zayed. But among the things he is accused of doing for the Emirates was to “force” the White House to elevate Saudi Crown Prince Mohammed bin Salman (then just the Deputy Crown Prince) during a visit to DC in March 2017. At the time the FBI interviewed Barrack in June 2019, Trump was under significant pressure for his possible complicity in the Jamal Khashoggi assassination.

And now — at a time when EDNY is talking about indicting Barrack’s not-yet indicted co-conspirators — we learn that MbS invested $2 billion dollars in Jared Kushner’s brand new firm even in spite of all the reasons not to.

Six months after leaving the White House, Jared Kushner secured a $2 billion investment from a fund led by the Saudi crown prince, a close ally during the Trump administration, despite objections from the fund’s advisers about the merits of the deal.

Those objections included: “the inexperience of the Affinity Fund management”;the possibility that the kingdom would be responsible for “the bulk of the investment and risk”; due diligence on the fledgling firm’s operations that found them “unsatisfactory in all aspects”; a proposed asset management fee that “seems excessive”; and “public relations risks” from Mr. Kushner’s prior role as a senior adviser to his father-in-law, former President Donald J. Trump, according to minutes of the panel’s meeting last June 30.

But days later the full board of the $620 billion Public Investment Fund — led by Crown Prince Mohammed bin Salman, Saudi Arabia’s de facto ruler and a beneficiary of Mr. Kushner’s support when he worked as a White House adviser — overruled the panel.

Barrack’s apparent claim that Trump knew exactly what he was doing does nothing to change his legal posture before Trump became President, and DOJ indicted this before the statute of limitation expired on that conduct.

But the apparent claim that Trump knew about this — and the possibility that Barr did too, at least after the fact — would change the kind of crime that happened in 2017, after Trump became President. And, possibly, the culprit.

Sedition Is the Foundation on Which the Trump Associate Investigation Build... Matryoshka Doll: The Aleksandr Babakov Indictment