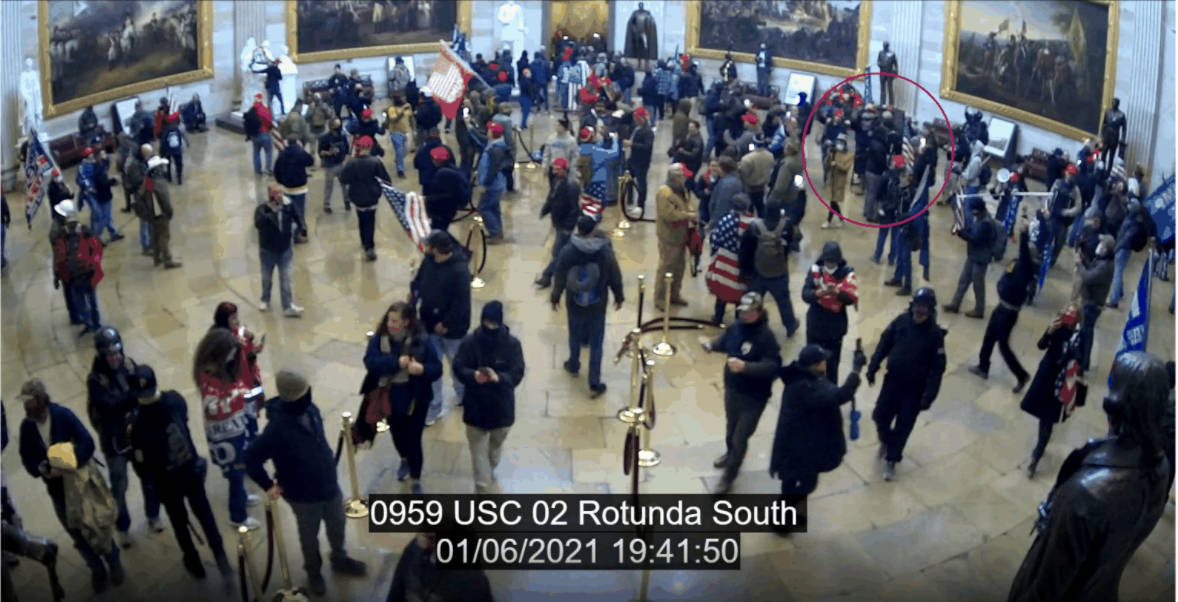 Yesterday, Oath Keeper Todd Wilson pled guilty to seditious conspiracy and obstruction. He’s from North Carolina, and while the Sedition Hunters who have followed the Oath Keepers closely had been tracking him and had noticed Ed Vallejo did not redact Wilson’s name on a transcript submitted in Vallejo’s detention fight, Wilson’s information was rolled out just the morning before he pled. He went from being charged to pleading to sedition in a matter of hours.

What we see in statement of offense — and, I suspect, what we’ll see going forward — is DOJ making little-noticed parts of a much broader network visible. As with Georgia Oath Keeper Brian Ulrich’s statement of offense, for example, Wilson’s provides hints of damning discussions that happened at the state level.

In November 24, 2020, in the “NC OK County Leaders” Signal chat, a group member advised, “we all need to be very careful about what we post here . . . While Signal is end-to-end encrypted, it’s always safest to operate under the assumption that someone is monitoring our conversations electronically.”

For sixteen months, the non-specialist focus on the Oath Keepers has been tracking The Stack and those directly associated with it (though Oath Keeper researchers always had a broader focus). But we’re going to increasingly see pieces of this conspiracy that were visible, but not seen, because the spectacle of The Stack attracted most of the attention. Some of those little-seen aspects of the larger network may prove far more important.

One testament to that is that Wilson showed up, but was not noticed, in photos already submitted to the docket in Oath Keeper cases.

Wilson’s presence in the Rotunda is actually one of the tactically most important parts of his statement of offense. Wilson entered the Capitol from the west side and then helped open the East doors from inside.

Even before he entered the building, though, Wilson was one of four people with Stewart Rhodes watching the building as it was first assaulted and he was with Rhodes as the Oath Keeper leader first entered restricted grounds.

Just before 1:30 p.m., in response to a claim by an Oath Keeper affiliate on the “Leadership Intel Chat” that Antifa had breached the Capitol, Rhodes replied: “Nope. I’m right here. These are Patriots.” Minutes later, Rhodes posted to the group that he was standing at the comer of the Capitol building with four people to include Wilson. Rhodes then posted to the “DC OP: Jan 6 21 Signal group chat: Pence is doing nothing* As I predicted.” Rhodes added, “All I see Trump doing is complaining. I see no intent by him to do anything. So the patriots are taking it into their own hands. They’ve had enough.”

Shortly after 2:00 p.m., Wilson, Rhodes, and others bypassed barricades and Capitol Police officers, and unlawfully entered the restricted grounds of the Capitol. While advancing, Wilson heard Rhodes proclaim that they were in the midst of a “civil war.” Through plumes of smoke, Wilson could see mobs of people climbing up scaffolding and descending on the Capitol. Rhodes soon directed his followers to meet him at the Capitol. [my emphasis]

From there, Wilson (who escaped notice in part because he wasn’t kitted out like the others and who was a member of the Oath Keepers Intelligence Signal chat) entered the building with the goal of gathering intelligence.

At 2:34 p.m., Wilson entered through the Upper West Terrace Doors of the Capitol—the first of the co-conspirators to breach the building. Wilson was armed with a pocketknife and wore a neck gaiter and beanie hat to mask his appearance. Wilson entered the Capitol with the goal of disturbing the Congressional proceeding and gathering intelligence. [my emphasis]

Four minutes later, Wilson was helping push open the East doors, thereby helping The Stack and others open a second front of the attack.

By 2:38 p.m., Wilson had marched through the Rotunda to the east side of the Capitol where he joined in the center of a mob of people trying to push open the Rotunda Doors from inside of the building. Two Capitol police officers stood in front of the closed doors attempting to keep the mob at bay.

At approximately 2:39 p.m., the Rotunda doors were forced open, and a mob of people forcibly entered the Capitol through the doors. The entering mob included fourteen Oath Keepers co-conspirators—many of whom were wearing paramilitary clothing and patches with the Oath Keepers name, logo, and insignia—who had moved up and through the crowd on the east side of the Capitol in a military-style “stack” formation (“Stack One”), Wilson took cell phone video of them entering. The Rotunda Doors and surrounding facade suffered thousands of dollars worth of damage during the attack on the Capitol.

Wilson traveled with the others for a bit and may have accompanied the group that went to hunt down Nancy Pelosi.

Wilson walked through the Capitol for the next fifteen minutes, at times interacting with Dolan, Harrelson, and other co-conspirators who were heading southbound toward the House of Representatives.

That’s the tactically important part of his statement of offense.

The part that has attracted the attention, however, is that not long after 5PM, Wilson witnessed Rhodes make a call on speaker phone to someone who could directly access Trump.

At the Phoenix Hotel, Rhodes gathered Wilson and other co-conspirators inside of a private suite. Rhodes then called an individual over speaker phone. Wilson heard, Rhodes repeatedly implore the individual to tell President Trump to call upon groups like the Oath Keepers to forcibly oppose the transfer of power. This individual denied Rhodes’s request to speak directly with President Trump. After the call ended, Rhodes stated to the group, “I just want to fight.”

The Phoenix Park Hotel parking garage, remember, is where Enrique Tarrio met with Rhodes on January 5, more details of which were released Monday in a detention memo for the Proud Boys leader.

Tarrio claims that his surreptitious meeting with Elmer Stuart Rhodes III and others in an underground parking garage was “secondary to why he was there.” Defendant’s Motion at *5 Tarrio’s claim is plainly disproven by video of the event, but even if it were accurate, it misses the point.

First, Tarrio intentionally traveled to the Hall of States Parking Garage near the Phoenix Hotel where he met with others who were planning to remain in Washington, D.C. Tarrio’s decision to do so—even while at risk of violating the D.C. Superior Court stay-away order— demonstrates that even after his arrest, Tarrio remained engaged in planning for January 6. This point is further underscored by Tarrio’s efforts to rejoin encrypted communications and coordinate with Nordean and Biggs about the plans for January 6. Second Superseding Indictment (ECF 305) at ¶¶ 63-67 (Biggs: “I gave Enrique a plan. The one I told the guys and he said he had one.”).

Second, video from the documentary crew shows Tarrio making the conscious decision to travel to an underground downtown parking garage to meet with others rather than departing Washington, D.C., as he had been ordered to do. Specifically, filmmakers captured Tarrio preparing to enter the Phoenix Hotel. The next clip captured Tarrio standing outside the hotel near a truck. When asked what happened, Tarrio told the filmmaker, “We went in [the Phoenix Hotel] and somebody advised us that they’re going to call the cops.” Tarrio was then advised by a female companion, “I think we should leave.” The next clip showed Tarrio in a truck stopped outside the Phoenix Hotel, with Tarrio talking to two people standing on the sidewalk. Tarrio then directed the driver of the truck to travel around the corner from the hotel and enter the Hall of States parking garage—where he offered to pay for the entry. While driving down the ramp into the garage, Tarrio was filmed on a phone call advising the other communicant that he could not come back near the front of the hotel because “they’re already looking out the window.” Tarrio then provided directions to the underground garage. The same two people with whom Tarrio communicated in front of the Phoenix Hotel appeared less than five minutes later in the underground parking garage, along with a handful of others.

Going forward, I suspect it would be ill-advised to assume the word “co-conspirator” assumes the conspiracy in question is entirely self-contained in one militia.

That’s worth keeping in mind when trying to guess whom Rhodes called. The most obvious candidate would be Roger Stone, and I promise you, before this is done, we’ll learn that Stone or his flunkies were involved in similar conversations.

But by the time of this call, per this WaPo piece, Stone was already fleeing. (h/t William Ockham)

Stone had said he expected to attend a meeting with administration officials on pardons that had been pushed back to 6 p.m. because Trump had “ruined the schedule for the day.” But following the riot, Stone and Davis left D.C. for the private flight.

Before Stone leftthe Willard for Dulles around 5 p.m., he paused for a photo in front of a hotel TV showing coverage of the riot.

And Wilson’s statement of offense gives the kind of nod to Mike Flynn that earlier Oath Keeper filings had restricted to Stone.

In December 14, 2020, after reading an article posted by a group member in the “Leadership Intel Chat” titled, “General Flynn warns of unelected ‘tyrants,’ says ‘time for God-fearing Americans to fight,'” Wilson replied, “It is time to fight!” [link added]

And Wilson has ties to people who have ties to Flynn.

So who knows? It could be Stone, it could be Flynn, it could be someone else — like Rudy or Mark Meadows — who genuinely did have direct access to the President.

The point being, we’re very close to a point, if not already there, where this networked conspiracy is going to coalesce such that it’s no longer about discrete militia groups, but it’s about people sitting in hotel rooms blocks away from the direct assault on the Capitol.

Update: Corrected the date of the garage meeting.

Update: The correct name of the hotel is the Phoenix Park.

WaPo Polls Whether Trump Should Be Charged Without Polling His Most Serious... John Durham May Lose His Battle But Gain New Ammunition to Fight His War