Fun with Bates Stamps, Part One: John Durham Confuses His Two Defendants to Rile Up the Frothers 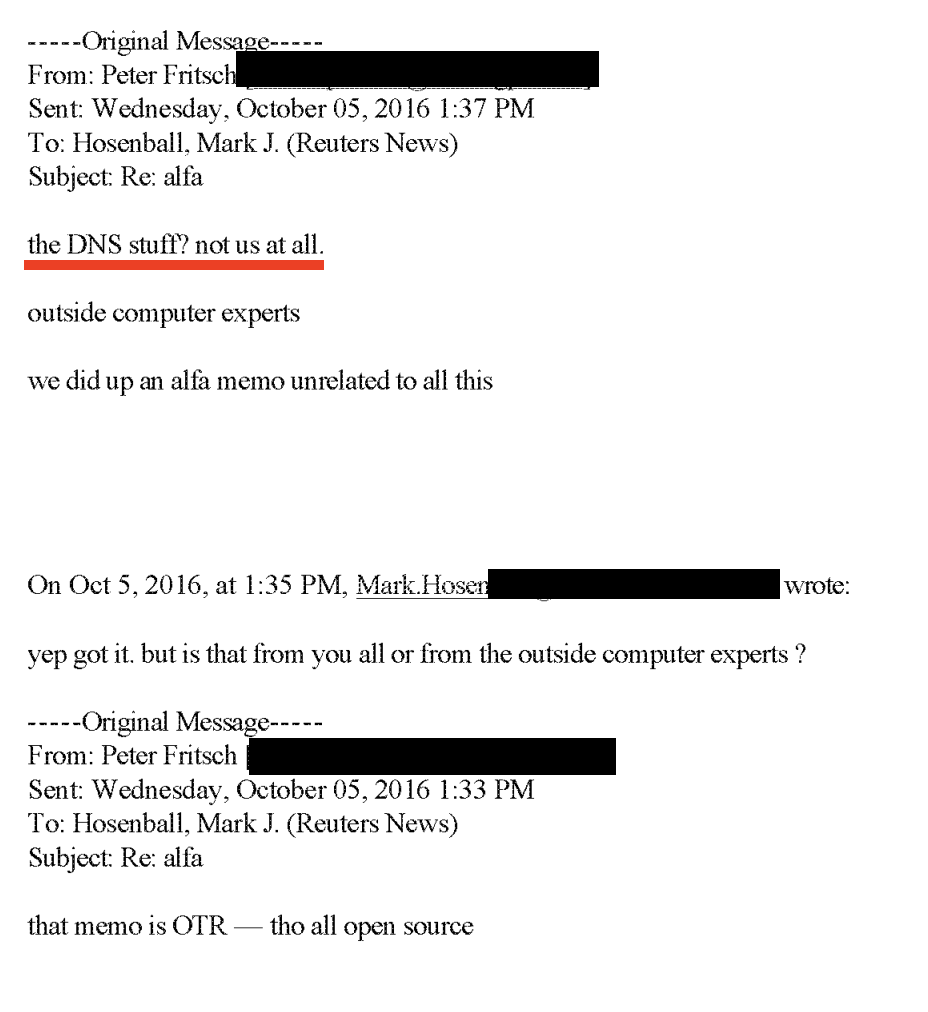 Before I look at what newly disclosed notes from March 6, 2017 (written by Tashina Gaushar, Mary McCord, and Scott Schools) reveal about the Crossfire Hurricane investigation, including that Carter Page’s FISA was “fruitful,” which will pose Durham some difficulties in the Igor Danchenko investigation, I want to do two posts having some fun with Bates stamps.

Bates stamps are the way that lawyers track the documents they shuffle around in discovery. Every page of a document should be stamped sequentially to show the document’s chain of custody; the numbers also make referring to such documents in court filings easier. Just as one not-at-all random example of how it is supposed to work, this January 31, 2017 document John Durham obtained from the CIA shows three Bates stamps. 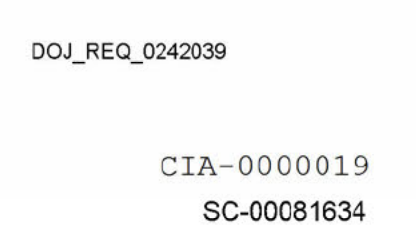 We can’t really be entirely sure what chain of custody this shows. Perhaps CIA stamped the outgoing files with  “CIA-0000019” and DOJ stamped the incoming CIA file, “DOJ_REQ_0242039.” We know, however, that Durham’s stamp is “SC-00081634.” Because Bates stamps are sequential, they help us to understand the order in which certain documents are handled.

One thing Bates stamps show us is that John Durham got approval to use a bunch of mostly-irrelevant Fusion GPS exhibits and did not get approval for the ones he actually wants to use at Michael Sussmann’s trial.

Because his team is made up of professionals, along with his objections to Durham’s exhibits, Michael Sussmann included a list that tied the exhibit numbers Durham assigned to the Bates stamps of the documents in question. That allows us to compare what exhibits Durham used to get Judge Christopher Cooper to buy off on submitting Fusion GPS documents with the jury with the Bates numbers of the Fusion GPS documents he really wants to introduce (thanks to William Ockham for doing a lot of this work).

A comparison of what Durham accidentally-on-purpose published to the docket with what Durham actually wants to introduce at trial shows that, of 62 pages of exhibits, he has identified just the following as exhibits at trial:

Just the last one, which I’ve bolded, has an assigned exhibit number in Durham’s list, suggesting either that he wants to use the documents with witnesses but not let the jury review the documents or that he’s not all that serious about using the documents as exhibits.

The list enables a tremendous amount of fuckery and more possible depending on how dishonest Durham wants to be.

For example, Durham has not obviously included the email where Mark Hosenball sent the link to the mediafire package to Fusion GPS, even though all the emails strongly support that’s what happened. Thus, as laid out, Durham seems intent to mislead the jury into believing that Fusion got that link via Tea Leaves or Michael Sussmann directly and not, as they’ve explained, via a journalist.

As noted, there are places where the list Sussmann included only the first page of a series. Given the way Durham is treating serial October 5, 2016 emails (most notably those involving Eric Lichtblau), it’s possible he does not intend to include follow-on pages in his exhibits. In several cases, that would leave out important context.

For example, in the October 5, 2016 thread between Fritsch and Hosenball, including just the first page of that exhibit would leave out where Fritsch said,

the DNS stuff? not us at all.

we did up an alfa memo unrelated to all this

It would also leave out where Fritsch pointed Hosenball to the public tutanota email included at the link that Hosenball himself sent to Fritsch, another piece of evidence showing that this was not an internal operation.

That is, as described, Durham may plan to falsely suggest these efforts were more closely tied than the evidence shows (it might exclude, for example, a key piece of evidence that Judge Cooper pointed to that showed this wasn’t a grand conspiracy).

Similarly, if just the first page of these exhibits were to come in, it would mean the jury got to see that Fusion sent out their Alfa Bank report, but not read the Alfa Bank report itself. Certainly, Durham could credibly argue that including the report would be prejudicial and as such might distract the jury. But excluding the report would also deprive the jury of the only material shared with the FBI that non-experts would have the ability of assessing themselves, both for the quality of the research and the validity of concerns of alleged ties between Trump and Alfa Bank.

For example, the report describes Richard Burt’s publicly acknowledged role in Trump’s first speech (though not a later role discovered as part of the Mueller investigation).

Burt has acknowledged that he played a significant role in writing Trump’s first major foreign policy speech. “I was asked to provide a draft for that speech. And parts of that of my draft —- survived into the final,” he told NPR.”‘

In the April 27 “America First” speech, Trump laid out an isolationist foreign policy. He criticized NATO and promised he would pursue better relations with Russia– skipping over its invasions of its neighbors and human rights abuses?’

It describes several allegations of Alfa Bank’s involvement in spying on adversaries.

Diligence also investigated a reporter from The Vail Street ournal who had contacted the CPI regarding the Alfa libel case. Private investigators for Diligence conducted a trash-stealing operation against the personal residence of the journalist. The operation was eventually exposed by an insider at Diligence. The affair caused high-level consternation in Washington due to a bizarre snafu: Unknown to the Diligence investigators, the reporter had vacated his home and rented it to a top White House official. That led to a confidential national security investigation of possible espionage by Alfa.

It even notes Petr Aven’s close ties to Putin, ties that Putin would exploit within months of the report in an attempt to form a back channel with the Trump Administration (though I suspect Putin did this in part to fulfill these suspicions).

As the face of Alfa Bank, Peter Aven remains the group’s key interface with the Kremlin. It appears his importance has only grown. Alfa Group, and specifically Alfa Bank, have a longstanding presence in the US and the UK.

It is clear that Aven remains the key political figure in Alfa Group, with multiple current links to the government and security services, as outlined above. He has also driven the development of international links through the expansion of Alfa Bank in the US and Europe. The bank has carried out careful outreach, running an international Alfa Fellows program and maintaining a high profile. Although not itself a target, the bank has suffered from sanctions however, and has a particular interest in lifting sanctions’.

There’s a lot of crap that came from Fusion GPS, but their straight Russian research held up pretty well, and this is an example why it was reasonable for Perkins Coie to hire Fusion. So while Durham might successfully argue that this would be prejudicial, it is also one of the best ways for the jury to assess the credibility of Perkins Coie’s basis for relying on Fusion. It’s also necessary to explain why Michael Sussmann and Rodney Joffe might believe sharing this material with the FBI pertained to national security, not political malice.

Perhaps the most alarming detail in what Durham included in his exhibit list is that last one, the only one that includes an actual exhibit number.

Durham has made much of the fact that Lichtblau sent an email to Peter Fritsch asking if he had told him (at an in-person meeting) that Sergei Millian had an Alfa email address. As included here as an exhibit, Durham would present this without context, insinuating that Fritsch learned of this via Joffe or someone.

But the actual email thread — exchanged in September, when Lichtblau was in the thick of trying to publish this story — makes it clear that Fusion formed this inference based off entirely public ip information, research entirely unrelated to the DNS allegations.

So as laid out here, Durham has allowed for a good deal of at least possible fuckery.

But then there’s the question of what emails he did present to Judge Cooper claiming he wanted to use as exhibits.

The vast majority of these emails are entirely unrelated to the case against Sussmann. Many of the emails, though, might be related to Igor Danchenko’s case. They pertain to publicly sourced concerns about Sergei Millian, concerns shared far outside of Fusion, as well as to open source research on Carter Page. They do seem to reflect knowledge of a single Christopher Steele report, but at a time before Rodney Joffe first met anyone at Fusion GPS.

Meanwhile, in addition to the emails over which the Democrats or Rodney Joffe have claimed privilege, there are around another 35 that aren’t privileged but which Durham didn’t include in his exhibit of the emails that, he claimed, he wanted to rely on at trial.

In other words, those emails were utterly useless as an exhibit to allow Judge Cooper a good way to assess the exhibits that Durham actually wants to use at trial. They were, however, really useful at riling up the frothers.

The fact that Durham included many emails he doesn’t want to use as exhibits, but didn’t include many emails (including unprivileged ones) that he wants to use as exhibits, including all but one of the ones to which he has assigned an exhibit number, makes it all the more curious that Durham “accidentally” posted these emails publicly to the docket and the unpublished them.

In any case, it’s still possible this fuckery will blow up at trial (assuming that Durham doesn’t find some reason to make an interlocutory appeal, which I think is likely). As Judge Cooper noted in his order regarding motions in limine, “The Court will reserve judgment as to the admissibility of any additional email it has not yet seen.”