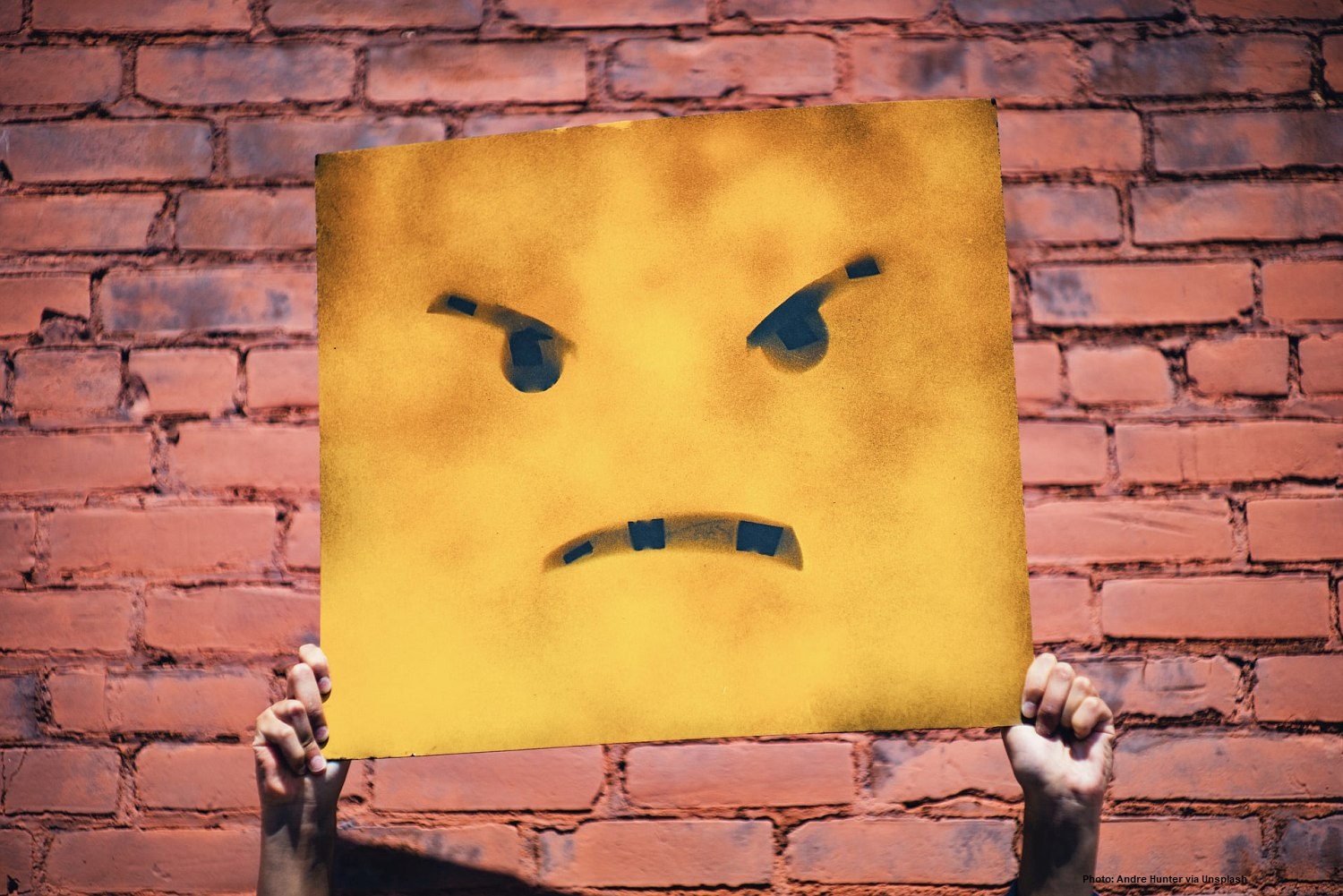 If you’re not white you’re not surprised at expressions of hate in our society. There are frequent demonstrations in the form of microaggressions white folks often miss.

Sometimes they’re more obvious, like racist tagging on buildings or even more obvious like the noose once left in a friend’s front yard tree, or direct confrontation experienced by another friend and their family who trapped in their car by racists yelling at them and beating on their vehicle. Many of these expressions never make the local news and might not even be reported to police for fear of making things worse.

But overt signs of hate, the kind to which even white people notice and take exception, didn’t appear as frequently in the news until Donald Trump took the White House.

Now increasingly everyone can see the wretchedness out in the open, waving its stars and bars, screaming hateful epithets at persons who aren’t cis-het white.

Like the insurrectionists waving Confederate flags outside and in the Capitol building on January 6, 2021.

Like the neo-Nazis’ demonstration in Orlando, Florida this past February.

And then the usual Republican DARVO response – Deny, Attack, and Reverse Victim and Offender – when confronted with these hateful expressions.

In February, Florida Gov. Ron DeSantis’ aide Christina Pushaw accused the Democrats of being neo-Nazis followed by DeSantis playing victim by accusing Democrats of smearing him about the neo-Nazis.

Yet nothing about DeSantis’ office’s response discouraged another future demonstration with attacks on passersby.

The hate’s all out there in the open – and it’s escalating.

It’s no longer restraining itself to minorities, either; it may also be a component of hybrid warfare intent on demoralizing a substantive number of Americans while embedding and normalizing itself in our communities.

On Saturday evening December 4, 2021, a white nationalist group — the Patriot Front (PF) — gathered in Washington DC and paraded in numbers along the Mall before hopping into U-Haul trucks and driving away.

The group is a spin-off from Vanguard America which took part in the hate rally in Charlottesville VA in 2017.

PF has had numerous pop-up events; the Anti-Defamation League has documented their activity across the country from propaganda to rallies. The December 4 event was in the same vein.

There were many calls to avoid giving this fascist organization any air time, and more calls to ridicule them as unserious.

… This weekend in Washington, a ridiculous white supremacist boys club called Patriot Front dressed up in matching outfits to make themselves look like menacing middle managers of an electronics store. They got their white nationalist flags and their little shields and their khakis and their shin guards and they marched from the Lincoln Memorial down the national mall in what was supposed to be a white supremacist show of force in the nation`s capital. …

But the December 4 event should have given us pause, especially 11 months after the January 6 Capitol Building insurrection.

— PF didn’t have a permit for their demonstration;

— They amassed a large number of participants in a short time with little-to-no advance notice to the public;

— They used at least one smoke bomb during their demonstration;

— Their rally took place in the same area the insurrectionists gathered and traveled from the January 6 speeches at the Ellipse to the Capitol Building;

— Police presence was a fraction of the number of PF rally attendees, with many on bikes;

— It was difficult to tell whether police were protecting or monitoring PF attendees.

Not only were folks left of center insisting PF’s rally not be treated as a valid expression of dissent, but they encouraged laughing at their normcore appearance which included not only khaki pants and ball caps but white neck gaiter masks.

Where have we seen so many white men wearing white fabric masks over their faces not to prevent infection but to hide identity while displaying a unified identity?

The December 4 event and other earlier PF events like this one may have looked performative, like costume players merely dressing as contemporary fascists, but the entire effort made a point and may have been proof-of-concept for some other future effort.

In other words, what’s to stop another group which is armed from beginning an assault on Washington DC in exactly the same way?

Enclosed box trucks show up, their contents not visible to anyone on the street including law enforcement; the occupants jump out wearing similar outfits and shields but this time concealing firearms and other weapons; they march to their intended destination and deploy a smoke bomb at first to mask another explosive device or to mask their weapons.

On December 4 they made it clear they could do this.

I’d have been less worried about these normcore shock troops but persons with more expertise have likewise expressed concern.

All of the above I wrote months ago, beginning a draft in December after the PF event in D.C., revising the draft after yet another PF rally on January 8, 2022 when PF participated in the March for Life anti-abortion rally in Chicago IL.

Clearly I should have published what I had at the time, ahead of yesterday’s arrest of 31 PF members in Coeur d’Alene ID for conspiracy to riot at a scheduled Pride parade.

“It appears these people did not come here to engage in peaceful events.” Authorities arrested 31 members of the white supremacist group Patriot Front near an Idaho pride event after they were found packed into the back of a U-Haul truck with riot gear. https://t.co/XXbiCN3rbj

Though Coeur d’Alene police were in contact with federal law enforcement, it was CADPD which handled the arrest and charging of the PF members.

Only one person of the 31 arrested was from Idaho; the rest were from across the U.S. — Washington, Oregon, Texas, Utah, Colorado, South Dakota, Illinois, Wyoming, Virginia, and Arkansas — though the bulk were from West and Midwest states.

No firearms have been mentioned in any reports, but this event could have been bad had PF arrived and violence triggered if locals were carrying weapons.

There have been no federal charges, yet; it’s not clear if any federal laws were broken. Traveling across state lines might be a factor.

It’d be easy to brush this off as just another stunt by cosplayers on a sunny summer Saturday afternoon, except the number of events like this and the corresponding propaganda by PF have exploded. 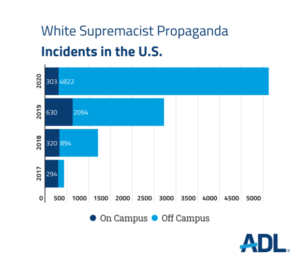 More than 80% of that uptick was PF’s work. Where are they going with this besides demoralizing much of the country?

There’s been some confusion in left-of-center social media about Patriot Front and the Proud Boys, some mistaking one for the other. They are different groups with overlapping if not identical ideologies.

Their xenophobia, antisemitism, and misogyny are their primary shared attributes along with racism to varying degrees.

We’ve now seen what the Proud Boys have been willing to do which Patriot Front have not yet engaged in — participation in events which can become violent. Yesterday’s Pride parade in Coeur d’Alene could have become a crossover event had Team PF not been arrested ahead of their destination.

What’s problematic, though, is the slack Proud Boys have been allowed. They’ve been treated like other civic and community organizations when their core ideology is hate. Buhl, Idaho allowed the Proud Boys to participate in a parade last summer:

The Times-News reports that Proud Boys members were among about 100 floats in the Sagebrush Days parade that went through the center of town.

The Buhl Chamber of Commerce runs the parade but wouldn’t comment specifically about the Proud Boys taking part.

“At this time the Buhl Chamber (of) Commerce will not feed into any negative propaganda,” the group said in a statement to the newspaper. “The Buhl 2021 Sagebrush Days parade saw 90 plus entries who celebrated in a courteous and civil manner. The Buhl Chamber takes pride in welcoming all participants, while giving them the opportunity to celebrate our great nation.”

Ditto for Scotland, South Dakota which had agreed to allow the Proud Boys to host a street dance in their town though the Proud Boys backed out due to unspecified security concerns.

Both communities have validated and legitimized a hate group by allowing them equal footing with the rest of their community.

Would they have done so with Patriot Front had they taken the same approach as the Proud Boys rather than showing up in a U-Haul panel van after publishing comments online which could be construed as an expressed intent to riot?

Are these two hate groups testing the waters to see where they can establish a foothold and grow their organizations? Or has there been something more hateful in the offing?

Why yes, there was — where PF was stopped from harassing a Pride event in Idaho, the Proud Boys had already stormed a public library to halt a Drag Queen story hour in San Lorenzo, California, scaring families with children by shouting hate-filled diatribes at attendees.

Alameda County sheriff’s department escorted the Proud Boys out of the venue.

Between the two groups at these two different locations on the same day, they now know they can get away with their harassment if they restrain themselves to smaller numbers and target families with children, or attack larger groups if they use more operations security.

When I first set out months ago to write about PF, I had also wanted to discuss harassment of Historically Black Colleges and Universities (HBCUs) and the truck convoys. Both are examples of the spread of overt expressions of hate, the first being racist and the second being socio-economic. Whatever was driving the attacks on HBCUs and the convoys has eased for now. I wouldn’t be one bit surprised if foreign influence operations were the primary drivers.

However we have plenty to focus on immediately with the domestic influence operations these two hate groups are engaged in which must be stopped.