On June 6, DOJ charged the Proud Boy Leaders with sedition. As I noted at the time, the single solitary new overt act described in the indictment involved Jeremy Bertino, Person-1, seeming to have advance knowledge of a plan to occupy the Capitol.

Just days earlier, as part of a discovery dispute, prosecutors had provided this (dated) discovery index. For several reasons, it’s likely that at least some these entries pertain to Bertino, because the CE ones are from the Charlotte office, close to where he lives, because he’s one of the three uncharged co-conspirators of central importance to the Proud Boys efforts, and because we know FBI did searches on him.

In a hearing during the day on June 9, the Proud Boys’ attorneys accused DOJ of improperly coordinating with the January 6 Committee and improperly mixing politics and criminal justice by charging sedition just before the hearings start. In the hearing there was an extensive and repeated discussion of the deposition transcripts from the committee investigation. AUSA Jason McCullough described that there had been significant engagement on depositions, but that the January 6 Committee wouldn’t share them. As far as he knew, the Committee said they would release them in September, which would be in the middle of the trial. Joe Biggs’ attorney insisted that DOJ had the transcripts, and that they had to get them to defendants.

Judge Tim Kelly ordered prosecutors that, if they come into possession of the transcripts, they turn them over within 24 hours.

Hours later, during the first (technically, second) January 6 Committee hearing, the Committee included a clip from Bertino describing how membership in the Proud Boys had tripled in response to Trump’s “Stand Back and Stand By” comment. 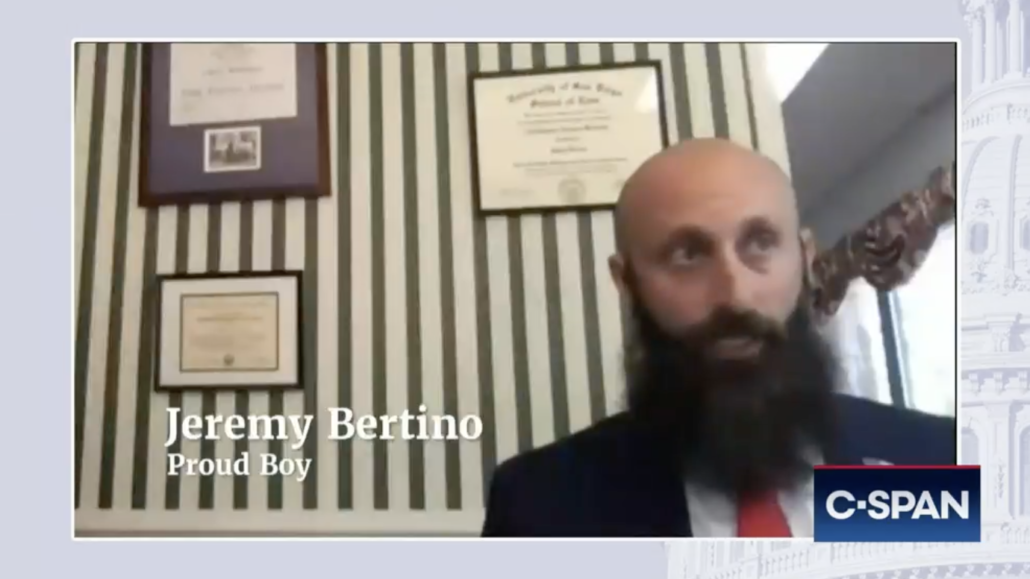 His cooperation with the Committee was not public knowledge. I have no idea whether it was a surprise to DOJ, but if it was, it presented the possibility that, in the guise of cooperating, Bertino had just endangered the Proud Boy sedition prosecution (which wouldn’t be the first time that “cooperative” Proud Boys proved, instead, to be fabricators). At the very least, it meant his deposition raised the stakes on his transcript considerably, because DOJ chose not to charge him in that sedition conspiracy.

Today, in response to a bid by Dominic Pezzola and Joe Biggs to continue the trial until December, DOJ acceded if all defendants agree (Ethan Nordean won’t do so unless he is released from jail). With it they included a letter they sent yesterday to the Committee — following up on one they sent in April — talking about the urgency with which they need deposition transcripts.

The discovery deadline for the Proud Boy case is tomorrow. If DOJ put Bertino before a grand jury and he said something that conflicts with what he told the Committee, it could doom his reliability as a witness, and with it the Proud Boys case, and with it, potentially, the conspiracy case against Trump.

The fact that Matt Olsen, National Security Division head, is on this letter suggests the concern pertains to the militias (and, indeed, the charged militia witnesses who appeared were Tarrio and Stewart Rhodes). Similarly, Nick Quested’s testimony may be inconsistent with other information DOJ has obtained.

Some pundits who’ve never done any original reporting on the topic claimed upon seeing this letter that it’s proof DOJ has been “twiddling its thumbs” while the Jan6 Committee has been doing all the work. 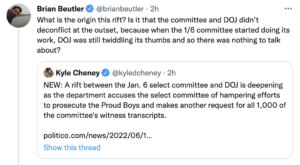 They’re saying that, though, when DOJ fairly explicitly said that grand juries have interviewed witnesses that Jan6 — and so, by association, lazy pundits — may not be aware of.

These are the kinds of surprises that can kill entire cases, after a year and a half of painstaking investigation.