Crime in the Era of Encrypted Apps: The Relationship between the DOJ and January 6 Investigations into Fake Electors

Yesterday, DOJ took a slew of overt steps in their investigation into the fake electors:

Even though some of these reports cite the late January batch of subpoenas DOJ sent to people who had declined to participate in the fake elector scheme, the timing of the action — taking place one day after the hearing on the scheme — has set off the usual set of whinging that DOJ isn’t doing as much as the January 6 Committee.

Yet even the first of these stories — the WaPo one — provides reason to believe that DOJ is not chasing the January 6 Committee on this investigation at all. And as I keep pointing out, in April 2021, DOJ took steps — starting on Lisa Monaco’s first day in office — that will be critical to this investigation.

I’ve laid out how, by seizing Rudy Giuliani’s phones in conjunction with his Ukraine influence peddling investigation on April 28, DOJ has made the content available for the January 6 investigation at whatever time they were able to show probable cause for a warrant. That’s because the privilege review covered all content from the phones that post-dates January 1, 2018 and the privilege review was conducted prior to any review for relevance, so it would cover content whether or not it related to Ukraine.

As this table lays out, the review on half the devices DOJ was able to get into (there were two the passwords for which it had not cracked by April) included content to date of seizure on April 28, 2021.

Special Master Barbara Jones turned over the last of this material on January 21, days before Monaco confirmed that DOJ is investigating the fake elector scheme. In April, purportedly to conduct an interview in advance of an imminent decision on Rudy’s Ukraine influence-peddling, DOJ asked for his help to get into the last several phones (the numbers in this story don’t match Barbara Jones’ reports, but CNN may suggest there were two newly discovered phones; there has been no overt activity in the Special Master docket since then).

All of which is to say that whatever material Rudy, a prolific texter, had on his phones about the fake elector scheme he was central to would have been available to DOJ with a warrant since January, but that’s only true because DOJ started this process on Monaco’s first day on the job.

Even in spite of that (and the timing of Monaco’s announcement of the investigation into the fake electors), like many people, I believed DOJ might have been chasing the January 6 Committee investigation. Except several details revealed in recent days makes it clear that DOJ had developed information independent of the Committee.

For example, I first learned that Boris Epshteyn was involved from this slide in Tuesday’s hearing, which left Epshteyn’s name unredacted whereas the copy docketed in the John Eastman litigation redacts it. 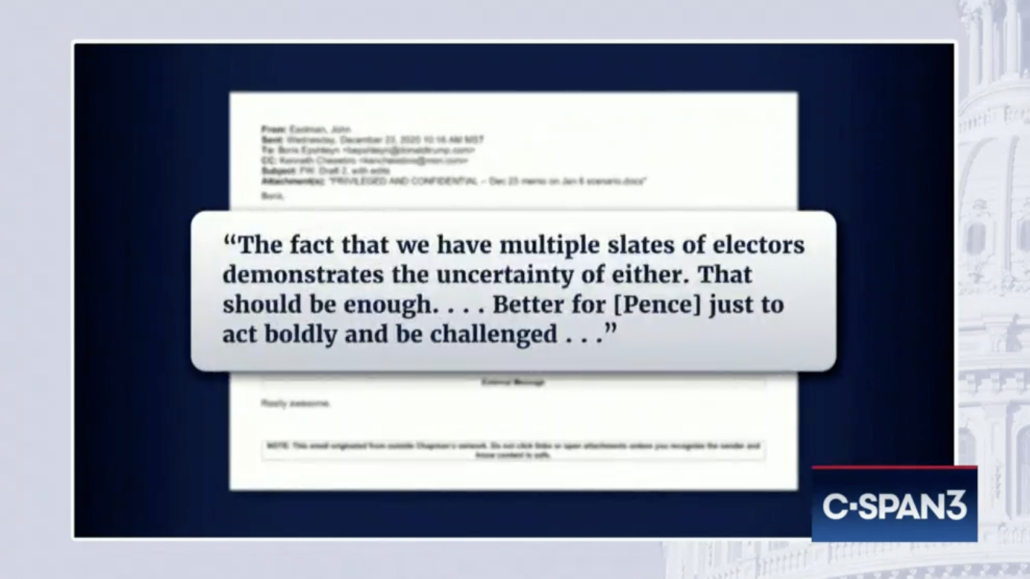 But Kyle Cheney noted that Epshteyn’s name was first made public in a footnote in the associated court filing. That filing was dated May 26.

Before May 26, according to earlier NYT and CNN stories on DOJ’s investigation into the fake electors, prosecutors were already asking about Epshteyn’s role. Here’s CNN:

Former Trump attorney Rudy Giuliani, adviser Boris Epshteyn and campaign lawyer Justin Clark are among the list of names the witness was asked about, the source said.

Yesterday’s WaPo story similarly described prosecutors asking about the involvement of someone — Bernie Kerik — whose role the January 6 Committee has not yet (as far as I’m aware) public disclosed.

Those earlier subpoenas sought all documents since Oct. 1, 2020, related to the electoral college vote, as well as any election-related communications with roughly a dozen people in Trump’s inner circle, including Rudy Giuliani, Bernard Kerik, Boris Epshteyn, Jenna Ellis and John Eastman.

One would-be Trump elector in Georgia, Patrick Gartland, had been appointed to the Cobb County Board of Elections and Registration and believed that post meant serving as an elector would have created a conflict of interest for him. Still, two FBI agents recently came to his home with a subpoena and asked whether he had any contact with Trump advisers around the time of the November election. “They wanted to know if I had talked to Giuliani,” Gartland said.

One possible explanation (though not the only one) is that DOJ has a more Rudy-focused understanding of the elector scheme than the Committee, which would make sense if they had materials from Rudy’s devices that the Committee doesn’t have.

To be clear: I think it likely that DOJ has or will exploit the January 6 investigation into the same topic in at least two ways.

First, I think it likely that DOJ piggybacked on the Committee’s privilege fight with Eastman. They’ve always had the ability to serve a warrant on Chapman University for the same emails the Committee has been receiving covertly, after all, which is the kind of thing DOJ loves to do in an investigation. But by doing so in the wake of Judge David Carter’s privilege decisions, DOJ can get crime-fraud excepted communications without a Special Master process like the one they used with Rudy.

And, because the January 6 Committee is obtaining sworn depositions from some of the people involved, DOJ may get evidence of false statements — from people claiming to have no knowledge of the larger scheme or corrupt intent of the fake electors — that they could use to coerce cooperation down the road.

With the warrants in NV and GA, DOJ is taking the kind of overt acts that sometimes precede arrests. Because DOJ can get email and social media content covertly, it almost always does that before serving subpoenas (to minimize the chance someone will destroy evidence in response). Only after that, usually, do they seize someone’s phone. That kind of stuff takes months. So there’s no way DOJ could have gotten there overnight based entirely off watching the January 6 hearing.

In Tuesday’s hearing, it became clear that the GOP will try to, institutionally, blame Trump for all this. That may not be true. But it may be useful for DOJ investigators.

Update: Fixed the names of the NV GOPers.

Amy Berman Jackson Gets a Two-Page Footnote in for the Appeal of Carl Nicho... In Sentencing Memo, SDNY Scoffs at Lev Parnas’ Claims of Cooperation