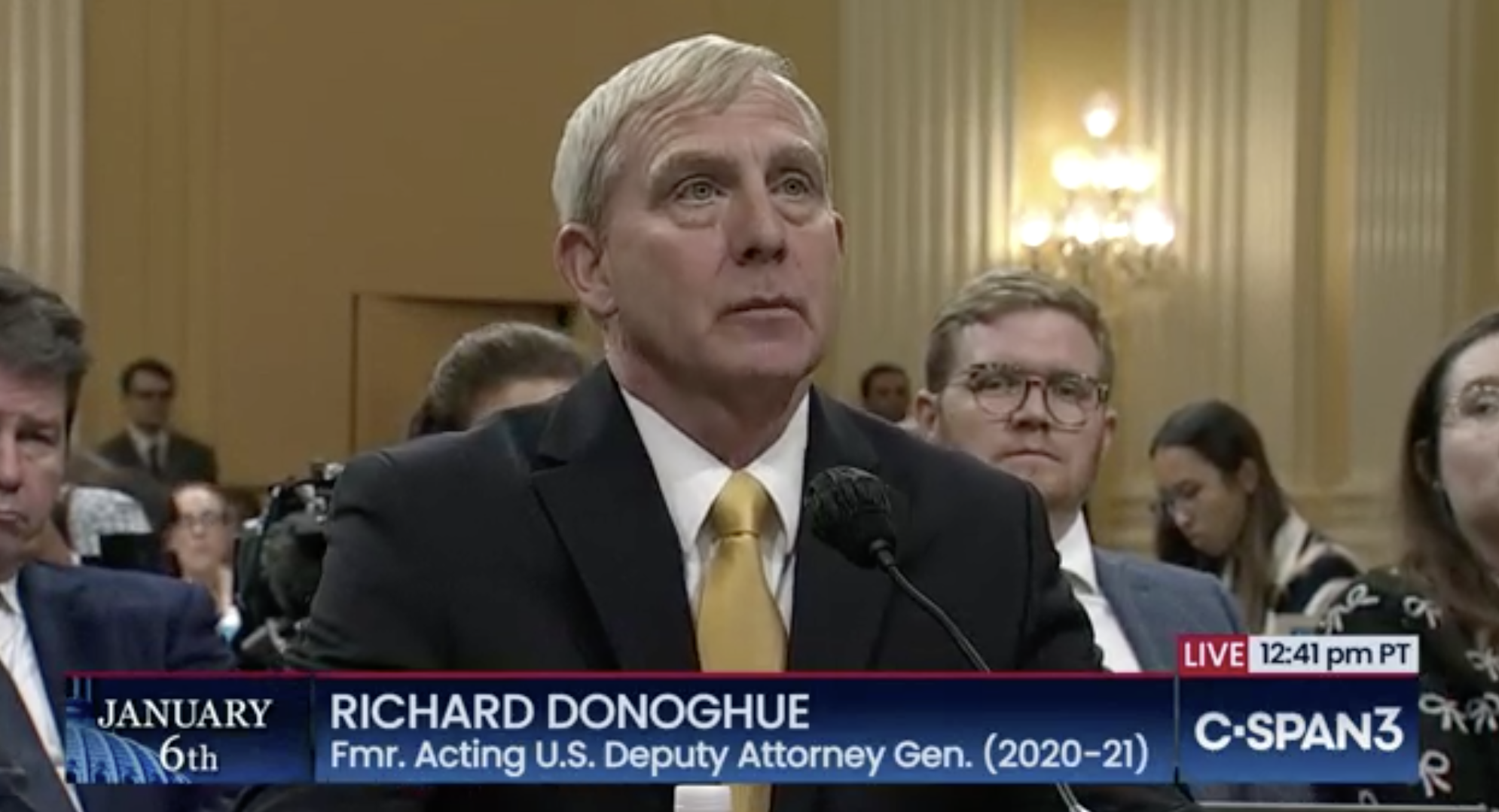 Almost all of the witnesses the January 6 Committee has relied on are deeply conflicted people. The same Trump attorney, Justin Clark, who allegedly coached Steve Bannon to withhold information from the Committee about communications with Rudy Giuliani and Mike Flynn appeared on video claiming to have qualms about using fake electors in states where the campaign did not have an active legal challenge. Ivanka claimed to believe Bill Barr’s claims that voter fraud couldn’t change the election, but the Committee just obtained video of her saying otherwise. And Bill Barr himself has gotten credit for fighting Trump’s false claims of voter fraud even though he spent months laying the groundwork for those claims by attacking mail-in ballots.

But yesterday’s hearing was something else.

After Liz Cheney invited watchers to imagine what it would be like to have a DOJ that required loyalty oaths from lawyers who work there — a policy that Alberto Gonzales had started to implement in the Bush-Cheney Administration — Adam Kinzinger led former Acting Deputy Attorney General Richard Donoghue through a narrative about the Republican Party and the Department of Justice they might like to belong to.

The whole thing was a flashback. In May 2007, I was tipped off to cover Jim Comey’s dramatic retelling of the first DOJ effort to push back on Presidential — and Vice Presidential, from Liz Cheney’s father — pressure by threatening to quit. Only years later, I learned how little the 2004 Hospital Hero stand-off really achieved. So I’m skeptical of yesterday’s tales of heroism from the likes of Jeff Rosen and Steve Engel.

But that’s also because their record conflicts with some of the things they said.

For example, check out what Engel — someone who played an absolutely central role in Bill Barr’s corruption of the Mueller investigation, and who wrote memos that killed the hush payment investigation into Trump and attempted to kill the whistleblower complaint about Volodymyr Zelenskyy — had to say about politicization of investigations.

Engel: Well, it’s critical that the Department of Justice conducts its criminal investigations free from either the reality or any appearance of political interference. And so, people can get in trouble if people at the White House are speaking with people at the Department and that’s why, the purpose of these policies, is to keep these communications as infrequent and at the highest levels as possible just to make sure that people who are less careful about it, who don’t really understand these implications, such as Mr. Clark, don’t run afoul of those contact policies.

Or consider how Special Counsels were described, as Kinzinger got the witnesses to discuss how wildly inappropriate it would have been to appoint Sidney Powell to investigate vote fraud. Here’s how Engel explained the limited times there’d be a basis to appoint one:

Kinzinger: So during your time at the Department, was there ever any basis to appoint a Special Counsel to investigate President Trump’s election fraud claims?

Engel is presumably referring to John Durham with that initial comment. But Durham fails both of those tests: there was never a basis for an investigation, and for most of the time Durham has been Special Counsel, he’s been investigating people outside the Department that present absolutely no conflict for the Department. [Note: it’s not clear I transcribed this properly. The point remains: Rosen and Barr appointed a Special Counsel that violated this standard.]

In other words, so much of what Engel and Rosen were describing were abuses they themselves were all too happy to engage in, up until the post-election period.

Which is why I’m so interested in the role of Richard Donoghue, who moved from EDNY to Main Justice in July 2020, to be replaced by trusted Bill Barr flunkie Seth DuCharme. It happened at a time when prosecutors were prepared to indict Tom Barrack, charges that didn’t end up getting filed until a year later, after Merrick Garland and Lisa Monaco had been confirmed. The 2020 move by Barr looked just like other efforts — with Jessie Liu in DC and Geoffrey Berman in SDNY — to kill investigations by replacing the US Attorney.

That is, by all appearances, Donoghue was only the one involved in all these events in 2020 and 2021 because Barr was politicizing prosecutions, precisely what Engel claimed that DOJ, during his tenure, attempted to avoid.

That’s interesting for several reasons. First, in the context of explaining the January 3 stand-off in the White House, Donoghue described why environmental lawyer Jeffrey Clark was unqualified to be Attorney General.

Well, neither had regulatory lawyer Jeffrey Rosen (or, for that matter, Billy Barr). That is, in explaining why Clark should not be Attorney General,  Donoghue expressed what many lawyers have likewise said about Barr, most notably during Barr’s efforts to undermine the Mike Flynn prosecution (the tail end of which Donoghue would have been part of, though DuCharme was likely a far more central player in that).

In the collective description of the showdown at the White House on January 3, it sounds like before that point, Donoghue was the first one who succeeded in beginning to talk Trump out of replacing Rosen, because it was not in Trump’s, or the country’s, interest.

Donoghue also seems to have been the one to explain the impact of resignations in response to a Clark appointment.

Mr. President within 24, 48, 72 hours, you could have hundreds and hundreds of resignations of the leadership of your entire Justice Department because of your actions. What’s that going to say about you?

To be clear: Rosen would have pushed back in any case. As he described,

On the one hand, I wasn’t going to accept being fired by my subordinate, so I wanted to talk to the President directly. With regard to the reason for that, I wanted to try to convince the President not to go down the wrong path that Mr. Clark seemed to be advocating. And it wasn’t about me. There was only 17 days left in the Administration at that point. I would have been perfectly content to have either of the gentlemen on my left or right to replace me if anybody wanted to do that. But I did not want for the Department of Justice to be put in a posture where it would be doing things that were not consistent with the truth, were not consistent with its own appropriate role, or were not consistent with the Constitution.

But Rosen had already presided over capitulations to Trump in the past, including events relating to the first impeachment and setting up a system whereby Rudy Giuliani could introduce Russian-brokered disinformation targeting Joe Biden into DOJ, without exposing Rudy himself to Russian Agent charges. Repeatedly in yesterday’s hearing, I kept asking whether the outcome would have been the same if Donoghue hadn’t been there.

Plus, by all appearances, Donoghue was the one providing critical leadership in the period, including going to the Capitol to ensure it was secured.

Kinzinger: Mr. Donoghue, we know from Mr. Rosen that you helped to reconvene the Joint Session, is that correct?

Kinzinger: We see here in a video that we’re going to play now you arriving with your security detail, to help secure the Capitol. Mr. Donoghue, thirty minutes after you arrived at the Capitol, did you lead a briefing for the Vice President?

Kinzinger: Where’d you conduct that call at?

Donoghue: I was in an office, I’m not entirely sure where it was. My detail found it, because of the acoustics in the Rotunda were such that it wasn’t really conductive to having a call so they found an office, we went to that office, and I believe I participated in two phone calls, one at 1800 and one at 1900 that night, from that office.

Kinzinger: What time did you actually end up leaving the Capitol?

Donoghue: I waited until the Senate was back in session which I believe they were gaveled in a few minutes after 8PM. And once they were back in session and we were confident that the entire facility was secured and cleared — that there were no individuals hiding in closets, or under desks, that there were no IEDs or other suspicious devices left behind — I left minutes later. I was probably gone by 8:30.

Kinzinger: And Mr. Donoghue, did you ever hear from President Trump that day?

Donoghue: No. Like the AAG, the acting AG, I spoke to Pat Cipollone and Mark Meadows and the Vice President and the Congressional leadership but I never spoke to the President that day.

So it seems possible, certainly, that one of the few things that held DOJ together in this period is Donoghue, seemingly installed there as part of yet another Bill Barr plot to corrupt DOJ.

Congresswoman Cheney, who in her opening statement talked about how outrageous it was for Trump to demand that DOJ make an announcement about an investigation into voter fraud (but who voted against the first impeachment for extorting Volodymyr Zelenskyy for exactly such an announcement), ended the hearing by inviting those who had put their trust into Donald Trump to understand that he had abused that trust.