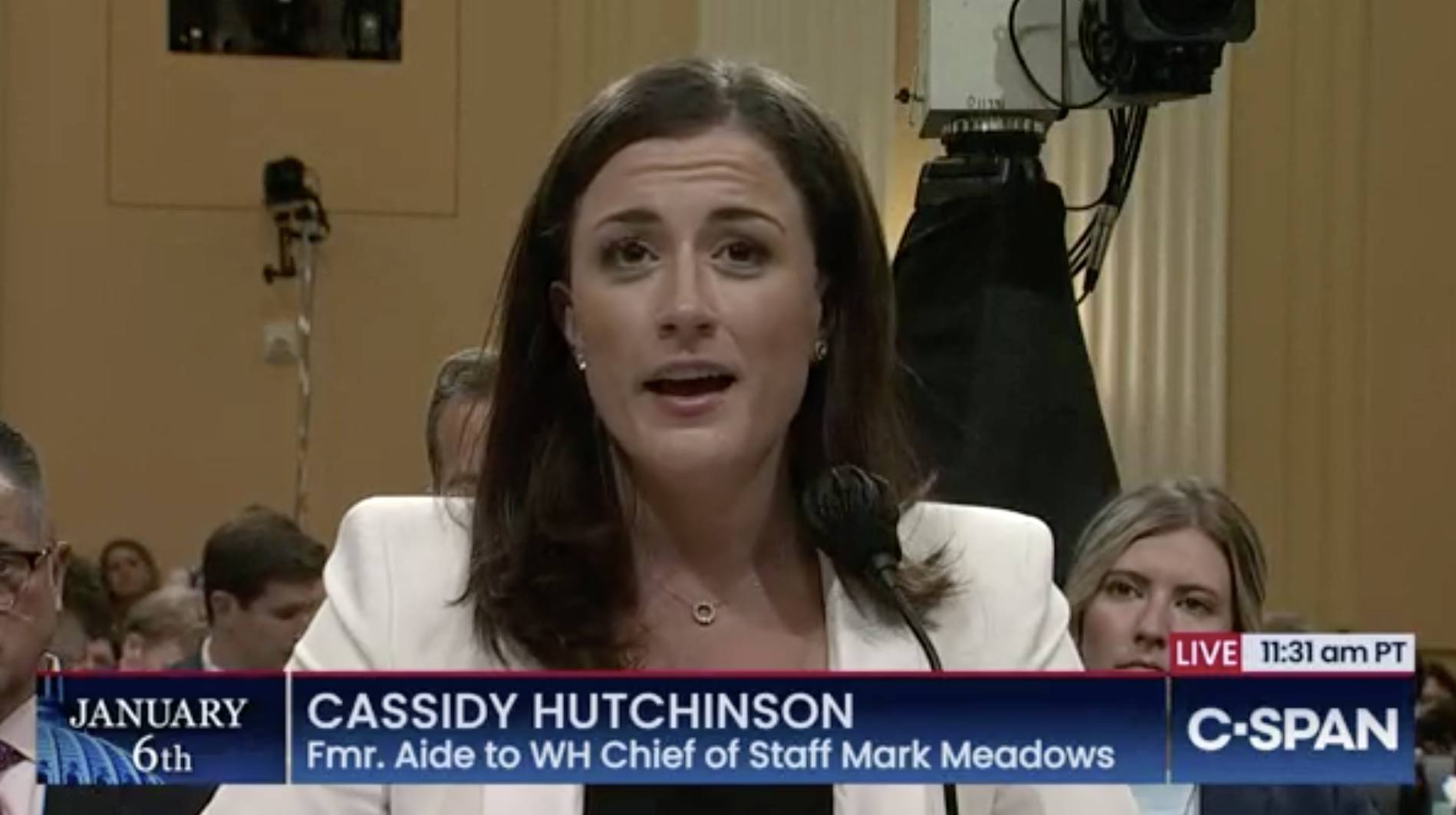 This morning, for the second time in two weeks, Liz Cheney called out former White House Counsel Pat Cipollone, by name, to cooperate with the January 6 Committee. 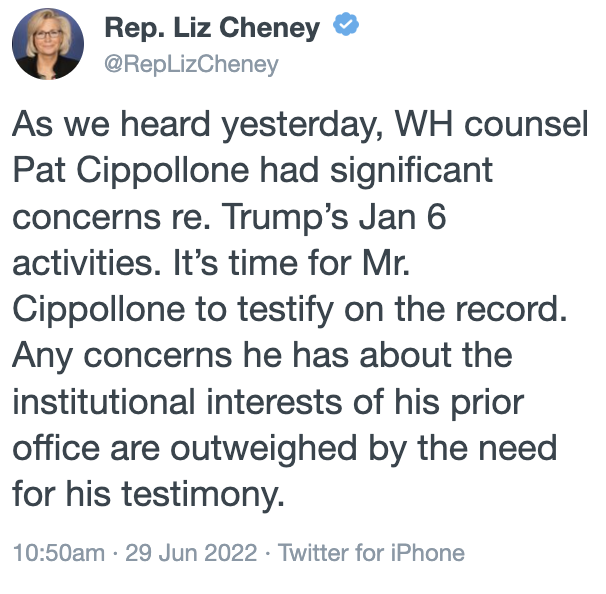 Yesterday’s testimony from Cassidy Hutchinson revealed one reason why his testimony would be so important. He predicted — on January 3 or 4th — that Trump might be prosecuted under the very same crimes DOJ has been charging for well over a year: conspiracy to defraud the United States and obstruction of the vote certification.

Cheney: We understand, Ms. Hutchinson, that you also spoke to Mr. Cipollone on the morning of the Sixth, as you were about to go to the rally on the Ellipse. And Mr. Cipollone said something to you like, “make sure the movement to the Capitol does not happen.” Is that correct?

Hutchinson: That’s correct. I saw Mr. Cipollone right before I walked out onto West Exec that morning and Mr. Cipollone said something to the effect of, “Please make sure we don’t go up to the Capitol, Cassidy. Keep in touch with me. We’re going to get charged with every crime imaginable if we make that movement happen.”

Cheney: And do you remember which crimes Mr. Cipollone was concerned with?

Hutchinson: In the days leading up to the sixth, we had conversations about obstructing justice of defrauding the electoral count.

Cheney: Let’s hear about some of those concerns that you mentioned earlier in one of your interviews with us.

Hutchinson: … having a private conversation with Pat on the after noon of third or fourth, um, that Pat was concerned it would look like we were obstructing justice, or obstructing the electoral college count. I apologize for probably not being very firm with my legal terms here.

Or rather, Cipollone didn’t predict Trump would be charged with ConFraudUS and obstruction. He predicted “we” would, presumably including himself and even Hutchinson.

Here I’ve thought I was ahead of the curve by predicting — last August — that if Trump were prosecuted, it would be for those crimes. It turns out that Trump’s White House Counsel was way ahead of me, predicting the same even before the insurrection!

Cipollone’s recognition of this legal exposure is important for a number of reasons. First, it validates DOJ’s approach — and does so in advance of the DC Circuit’s consideration of DOJ’s appeal of Carl Nichols’ outlier opinion rejecting such an application.

Those are also the crimes named in the warrant served on Jeffrey Clark last week.

But Cipollone’s awareness of this exposure also may explain why Cipollone has been reluctant to testify (though it’s possible he has testified with DOJ and simply doesn’t want that to be public). Hutchinson laid out a number of things that Cipollone did on January 6 that made it clear he was not willingly going along with Trump’s actions, most notably his efforts to get Trump to call off his mob before Trump re-ignited them with his 2:24 text attacking Mike Pence again. If there was a conspiracy to obstruct the vote certification, he took overt acts to leave that conspiracy before and during the conspiracy on January 6.

By that point, however, it may have been too late for Cipollone to avoid all exposure to Trump’s corrupt actions. That’s because Cipollone would have been involved in the pardons of those — Cheney focused on Roger Stone and Mike Flynn last night, but Bernie Kerik and Paul Manafort also got pardons — who would go on to play key roles in Trump’s insurrection. (I assume Cipollone was not involved in the Bannon pardon that came after the attack, and I noted in real time that Cipollone likely prevented a bunch of other pardons that would have made obstruction more likely.) That is, Cipollone might have exposure for obstruction for actions already taken by January 3 or 4 when he explained this legal exposure to Hutchinson.

Even Bill Barr said that rewarding false testimony with a pardon would be obstruction. And Roger Stone, Mike Flynn, and Paul Manafort all delivered on that quid pro quo.

For all Liz Cheney’s specific exhortations, Cipollone may know better than to testify to Congress. Because without testifying to DOJ, first, that may cause him more legal trouble than his current (presumed) silence.

Update: As a number of people in comments noted, the Committee has formally subpoenaed Cipollone.