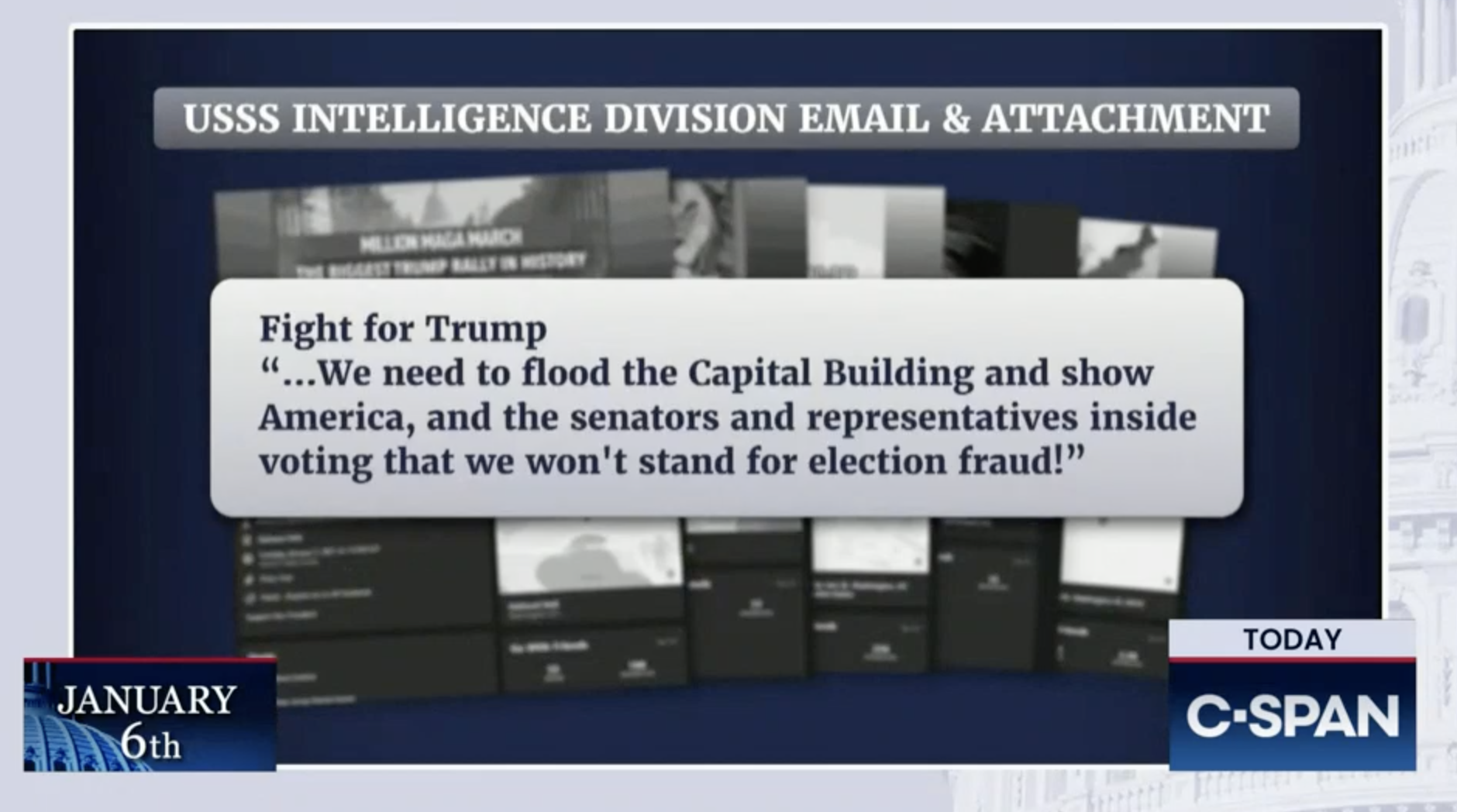 Since Cassidy Hutchinson’s startling testimony on Tuesday, credulous journalists have reported anonymous sources pushing back against one of her most dramatic stories: that when told he was not going to the Capitol on January 6, Donald Trump lunged towards the steering wheel of the SUV taking him back to the White House and then went after the clavicle of the head of his detail, Bobby Engel.

On top of being anonymous, the pushback never disputed Hutchinson’s claim: that she was told this story by Tony Ornato, the Secret Service Officer that Trump elevated into an important political position at the White House, Deputy Chief of Staff, in front of Engel, who did not dispute the story. Plus, Alyssa Farrah has described that Ornato, in the past, has disputed things she said under oath (about Trump’s stunt in Lafayette Square), without himself going under oath.

Nevertheless, that anonymous pushback has distracted from a far more alarming detail in Tuesday’s testimony that Ornato and Engel have not disputed, neither on or off the record: that they got warnings about plans to occupy buildings in DC and, implicitly, warnings about Proud Boy involvement.

That revelation came just before Hutchinson affirmed a detail I’ve been almost alone in reporting for over a year: Not just Roger Stone, but also Rudy Giuliani, had links to the Proud Boys.

Cheney: US Secret Service was looking at similar information and watching the planned demonstrations. In fact, their Intelligence Division sent several emails to White House personnel, like Deputy Chief of Staff Tony Ornato and the head of the President’s protective detail Robert Engel, including certain materials listing events like those on the screen. 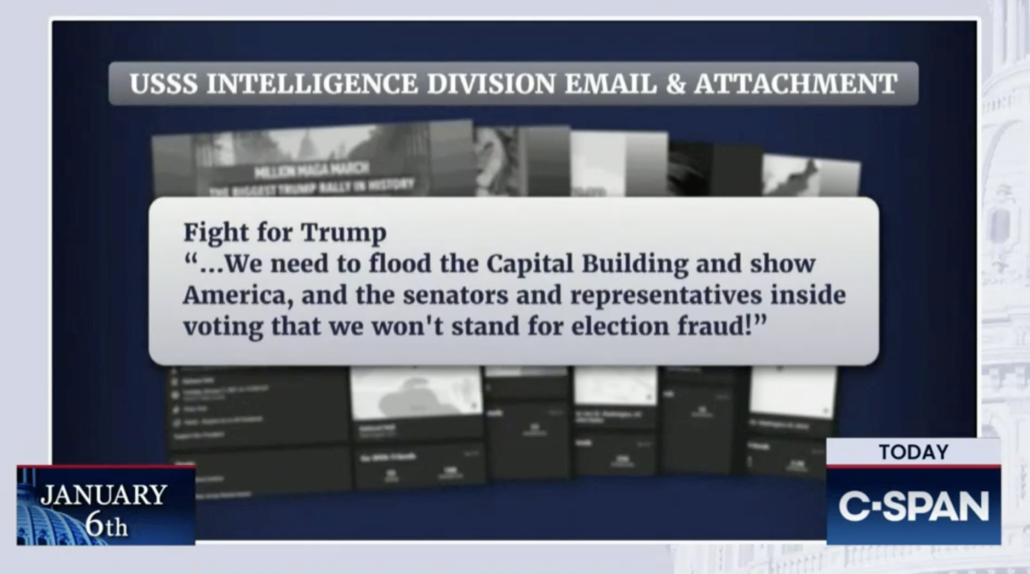 Cheney: The White House continued to receive updates about planned demonstrations, including information regarding the Proud Boys organizing and planning to attend events on January 6. Although Ms. Hutchinson has no detailed knowledge of any planning involving the Proud Boys for January 6, she did note this:

The reference to Ornato and Engel is among the first in Tuesday’s hearing: while Cheney had previewed Hutchinson’s interactions with Ornato and the Secret Service in her introduction, this reference was the first substantive description of Ornato’s activities. That description, as well as Hutchinson’s explanation of how she told Trump’s National Security Advisor Robert O’Brien that Ornato had had a conversation with Mark Meadows about the warnings of violence, came even before Cheney cued Hutchinson to explain what an important role the Deputy Chief of Staff played.

Some time later, the hearing revealed texts between Hutchinson and Ornato reflecting the latter’s awareness that Trump’s supporters were trying to avoid the metal detectors. 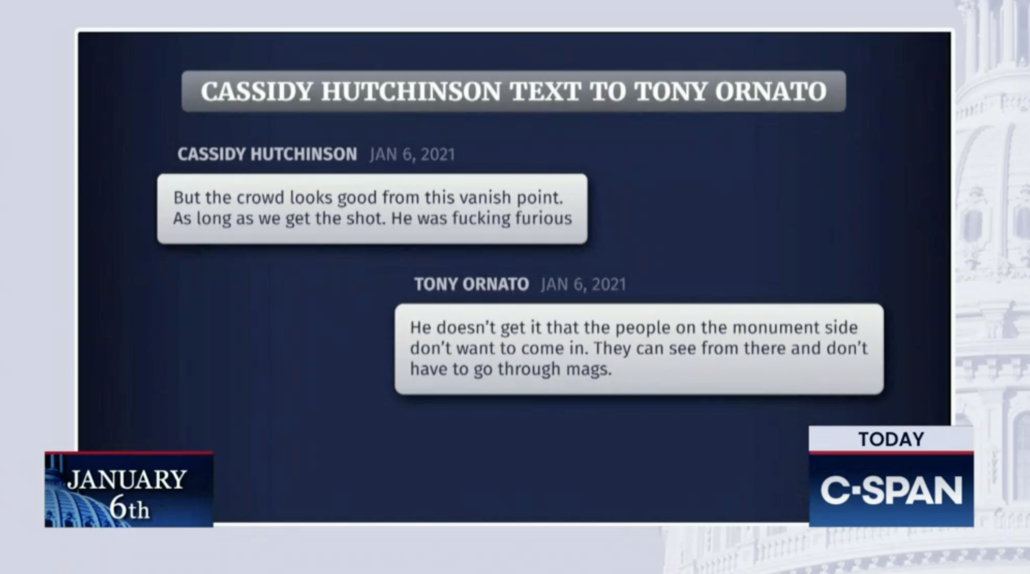 Importantly, Cheney mentioned something about this text exchange that doesn’t appear in the texts shown on the screen: a discussion between the two of them — Hutchinson and Ornato — about an “OTR,” an “off the record” movement to get Trump to the Capitol. The Committee appears to be withholding precisely what those texts say — involving Trump personally, and so colorably covered under Executive Privilege.

That may not be the only thing the Committee withheld from its presentation: note in my transcription above that Cheney doesn’t say Ornato and Engel received the warnings that were flashed on the screen. She says they received, “certain materials listing events like those on the screen.” [my emphasis] Particularly given the reports that the Committee met in a secure facility in advance of this hearing, that phrasing could allow for other records, records too sensitive to show publicly, tying the Proud Boys to plans to occupy buildings on January 6.

The story of Trump lunging in the SUV is a distraction, and Ornato, a loyal Trumpster, is likely using his pushback to distract from far more damning details of Hutchinson’s testimony:

Secret Service loyalists, for all their anonymous pushback, are denying none of these far more damning details, details that put them — and Meadows and Trump — in far more complicit position with respect to the attack.

Something Stinks about Kentucky but It’s a Complex Stink Amid Claims of Witness Tampering, Revisiting Peter Navarro’s Alleged ...