South Carolinians Converging at the East Door … and Hampton Inn

I’d like to look at how two men from South Carolina who stayed at the Hampton Inn together, George Tenney and Robbie Norwood, serially played key roles in opening the East Door on January 6.

As I noted in a post last July, Tenney was arrested with a former Marine named Darrell Youngers, though the subsequent investigation seems to have confirmed that they first met that day. The two of them entered the Capitol together at 2:19PM and went fairly directly to the East door by 2:24PM, where Tenney was the first to attempt to open that door to admit the thousands who had assembled outside. After tussling with the cops for a bit, the two gave up and left the Capitol.

Youngers was charged with just trespassing, but Tenney was charged with three felonies — obstruction, civil disorder, and assault — reflecting in part his contact with the cops and presumably also his premeditation in the weeks leading up to January 6.

When the men first started talking about pleading guilty, Youngers’ lawyer suggested they were sharing information with the government (though that doesn’t show up in their guilty pleas).

On March 30, Youngers pled guilty to parading, the trespassing charge most misdemeanor defendants plead to. His statement of offense focused on three things: Tenney’s efforts to open the East doors (and the contact he had with cops in doing so), Youngers’ own description of the “multiple doors” involved in breaching the Capitol, and an interview he and Tenney gave with William Norwood later that night.

14. That evening, YOUNGERS gave an interview from a hotel room with Tenney and William Robert Norwood III, where they wore masks and head coverings to conceal their identities.

Here’s that interview, which Youngers, Norwood, and Tenney (from left to right) gave while masked. 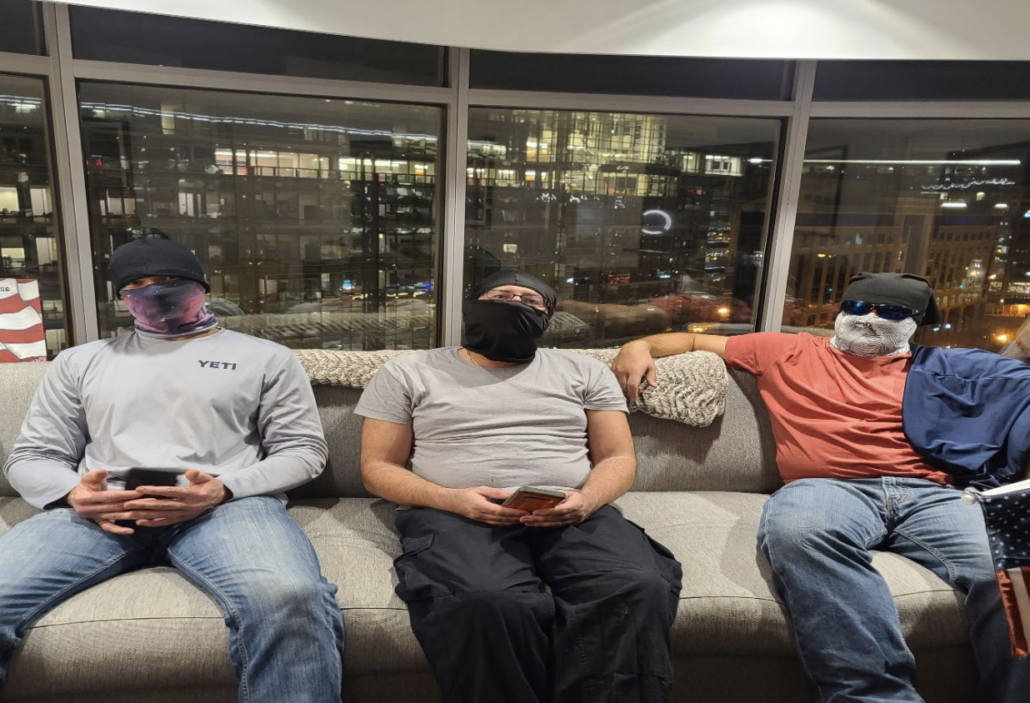 Norwood — who according to his first bail hearing used to be in a militia, about three years ago — was arrested months earlier than the other two. He had been turned in by family members shortly after the attack after he bragged (falsely) about assaulting a cop. He does appear to know Tenney from South Carolina, but entered the Capitol separately, four minutes after him at 2:23. In a second motion for detention, the government alleged that Norwood led rioters to Nancy Pelosi’s office before joining the later effort to open the East door — the one that led to the Oath Keepers and others breaching the building. After allegedly asking his estranged wife to lie about his case, he was detained, though he and the government are in plea discussions.

Youngers’ plea agreement included the standard language January 6 misdemeanor pleas include, consisting of either a social media review and/or an interview with the FBI, suggesting (though the inclusion of such boilerplate is not reliable) he had not yet done so.

The plea agreement Tenney entered into last Thursday, however, lacks that language, which may suggest he already did one or some interviews with the FBI. If Tenney did, he didn’t get much of a deal: he pled to two of the felonies against him: civil disorder and obstruction, avoiding only an assault charge for wrestling with cops. Depending on whether DOJ succeeds in persuading Judge Thomas Hogan to apply an 8-level enhancement for official victim/property damage, Tenney’s sentencing guidelines will be 21 to 27 months (without the enhancement) or 41 to 51 months (with it) — the latter of which would be one of the stiffest sentences to date for a prosecution that didn’t involve assaulting a cop, but which might be appropriate for the tactically critical role that opening that East door played in occupying the Capitol.

But I’m more interested in Tenney’s statement of offense, particularly how it compares to his and Youngers’ arrest affidavit. That is, I’m interested in any sign that DOJ has learned why and how Tenney came to head right through the Capitol to the East side to open that door, where thousands were waiting, or whether Norwood’s subsequent successful efforts (as part of a larger group) to open the East doors was related.

With Tenney’s guilty plea, the government has included slightly more language from December 28 indicating that Tenney was coordinating with people who were planning for all eventualities. 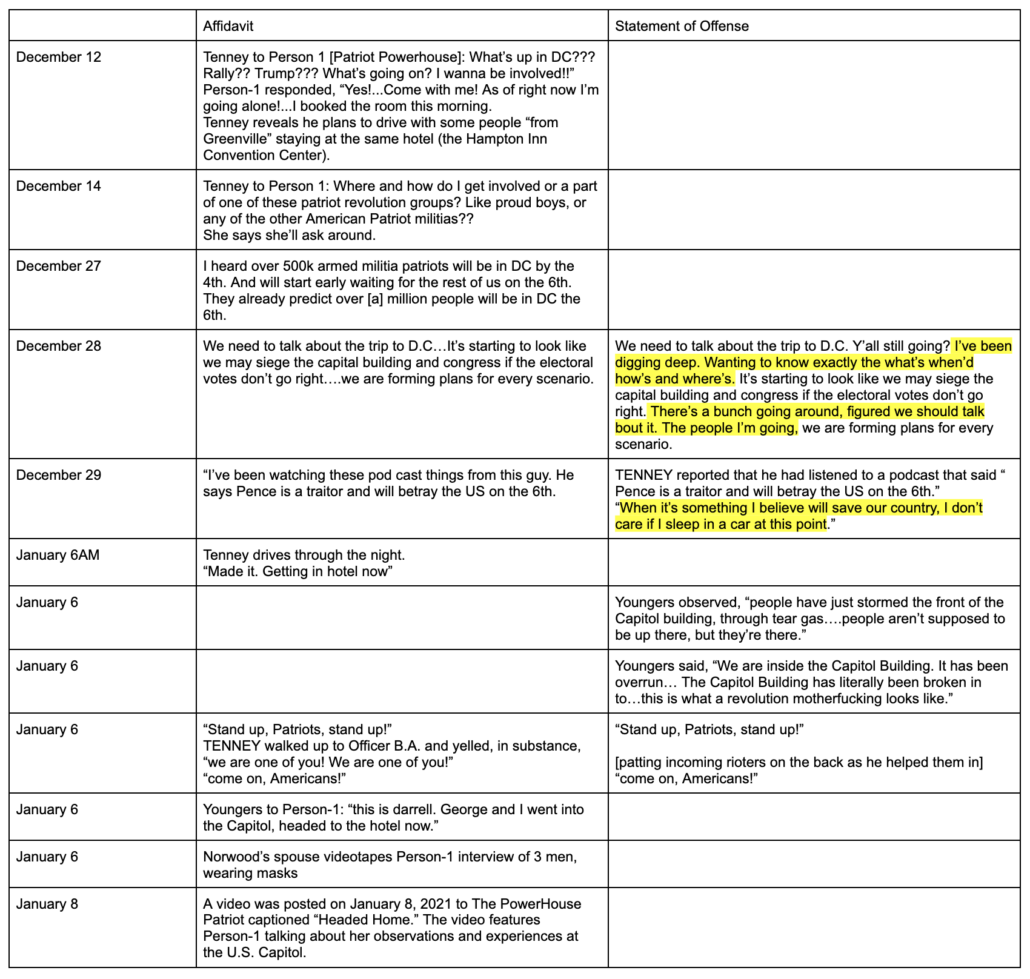 In two bail proceedings the government focused on Norwood’s lies about leaving the vest and helmet he stole at the hotel. But he also appears to have lied about with whom he was staying at the Hampton, claiming he stayed with an older couple from Ohio rather than people close to his same age from nearby in South Carolina.

Finally, NORWOOD claimed that upon leaving the Capitol grounds, he and his wife met an older couple from Ohio, who invited them to stay in their hotel room at the Hampton Inn for the night. NORWOOD claimed that he left the police vest and helmet inside the hotel room, but he could not provide interviewing agents with any further details about the hotel.

After Norwood was interviewed. by the FBI, he let Tenney know about it, because Tenney told the FBI that he knew about it in an (similarly misleading) interview little over two weeks later.

TENNEY said that he was only inside the Capitol Building for three or four minutes before he and the people he was with realized that something bad was happening, prompting them to leave. He indicated that he did not think he was doing anything wrong at the time, but, in hindsight, wishes he had not gone inside the Capitol Building. TENNEY further stated that he did not engage in any violence inside or cause property damage. Instead, he said, he told people to stop damaging things and helped officers who had fallen to the ground to get back on their feet.

During his February 9 interview, TENNEY also mentioned two other names: “Darnell,” (YOUNGERS’ first name is “Darrell”) and a person he identified as “Robbie” from Greenville, S.C., whom he said had already been interviewed by the FBI. TENNEY admitted to having met “Robbie” in the crowd at the January 6 rally, before he entered the Capitol.

In an interview after his arrest, Norwood admitted sharing a hotel room with Tenney.

In a subsequent interview on February 26, 2021, Norwood mentioned sharing a hotel room the night of January 6 with an individual named “George,” which is TENNEY’s first name.

What happened in that hotel room appears to be some of the substance of what Norwood was trying to convince his estranged wife to renege her testimony on months later, leading up to January (when prosecutors first asked Judge Emmet Sullivan to revoke Norwood’s bail).

The content of the defendant’s text messages with his estranged wife, appended as attachments to Pretrial’s Violation Report, show what appears to be a sustained campaign by the defendant to coerce, intimidate, threaten, and corruptly persuade a potential government witness to recant her statements to law enforcement and to obstruct justice. Communications between the estranged wife and defense counsel, which are also appended as attachments to Pretrial’s Violation Report, provide context for the text messages between the defendant and his estranged wife: “Robert Norwood has been trying to [coerce] me into emailing you, stating that, anything from my statements to the FBI were not true. However, I do not feel comfortable lying [sic] about anything. . . . I do not feel comfortable in anything that he was telling me to do.”

The estranged wife’s communications with Norwood and with Norwood’s counsel show that the defendant has, at the very least, been pressuring his estranged wife to recant her statements to the FBI, to not be truthful, and to “keep [her] mouth shut.” ECF No. 29, Att. 3. In fact, when the estranged wife texted the defendant, “I will tell the whole truth,” the defendant responded, “No you won’t . . . You’ll tell them you reached out to me and made the offer. That I didn’t respond to you . . . Do not throw me under the bus . . . What part of spousal privilege don’t you get???” Id. Additionally, when the estranged wife texted the defendant, “I refuse to write another bogus f***ing email,” the defendant responded, “It’s not bogus, and it will help us both. . . . Do what you said you already did. You lied to me. STUP F***ING LYING ABOUT EVERYTHING AND HELP ME LIKE YOU SAID YOU WOULD.”

To be clear: it’s not clear what relationship there is between Tenney and Norwood, aside from their shared hotel room and proximity in South Carolina. It’s their shared focus on the East door.

At 2:24, after making a beeline through the Capitol, Tenney was the first person to open the East door. 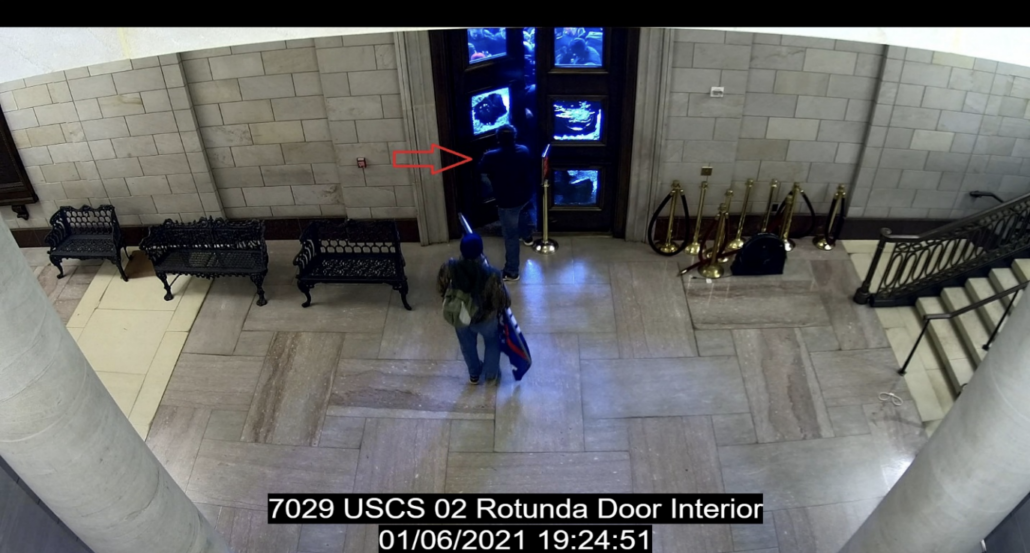 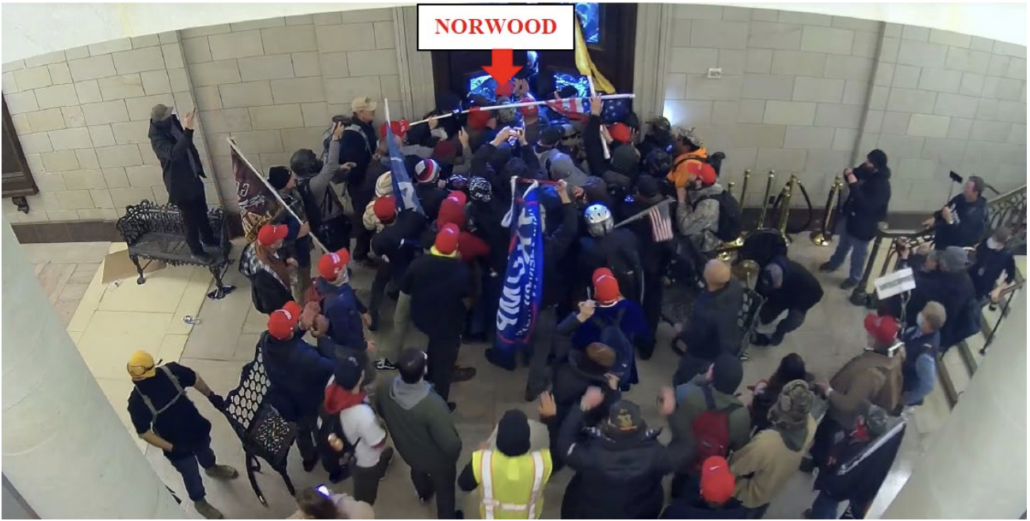 Then later that night, the two men donned masks and told their stories of the day, stories that presumably explain how both came to help rioters amassed on the East side of the building open a second front of attack.

By December 28, 2020, Tenney knew of plans to siege the Capitol. On January 6, he and fellow South Carolinian Norwood both played key roles in that siege.

So what happened in between?

Thanks to @CapitolHunters for pointing me to this video, which takes forever to download, which shows both breaches, and to talk me through some of the other people of interest who have yet to be arrested.