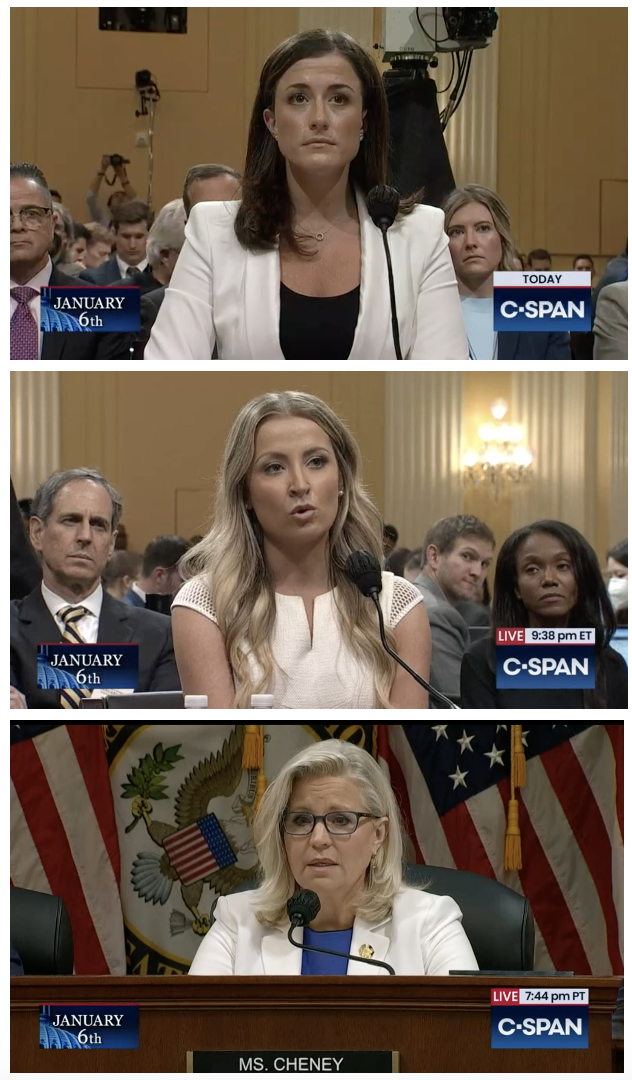 Last night’s January 6 Committee hearing had largely been telegraphed already, a minute by minute depiction of Trump’s inaction as his mob attacked the Capitol, seeking out to harm his Vice President. The most effective new material were the outtakes from Trump’s attempt to film a video the following day, where he couldn’t bring himself to say the election was over.

The most striking thing was how Pat Cipollone invoked Executive Privilege not just to protect conversations he had with the President, but to avoid speaking the most important things that could be used as the direct testimony that will be necessary to convict Donald Trump.

Here’s my thread from watching the hearing.

I’d like to talk about how Liz Cheney crafted her closing comments.

After formally thanking the witnesses there in the room, Sarah Matthews and Matthew Pottinger, she then transposed Cassidy Hutchinson’s bravery against the cowardice of the old men hiding, like Cipollone, behind Executive Privilege.

She emphasized the several women witnesses who had set an example of strength for women and girls.

Let me thank our witnesses today. We have seen bravery and honor in these hearings. And Ms. Matthews and Mr. Pottinger, both of you will be remembered for that, as will Cassidy Hutchinson. She sat here alone, took the oath, and testified before millions of Americans. She knew all along that she would be attacked by President Trump and by the 50-, 60-, and 70-year old men who hide themselves behind Executive Privilege. But like our witnesses today, she has courage, and she did it anyway. Cassidy, Sarah, and our other witnesses, including Officer Caroline Edwards, Shaye Moss and her mother Ruby Freeman are an inspiration to American women and to American girls. We owe a debt to all of those who have and will appear here.

And that brings me to another point. This committee has shown you the testimony of dozens of Republican witnesses. Those who served President Trump loyally for years. The case against Donald Trump in these hearings is not made by witnesses who were his political enemies. It is, instead, a series of confessions by Donald Trump’s own appointees, his own friends, his own campaign officials. People who worked for him for years. And his own family. They have come forward and they have told the American people the truth.

And for those of you who seem to think the evidence would be different if Republican Leader McCarthy had not withdrawn his nominees from this committee, let me ask you this. Do you really think Bill Barr is such a delicate flower that he would wilt under cross-examination? Pat Cipollone, Eric Herschmann, Jeff Rosen, Richard Donoghue? Of course they aren’t. None of our witnesses are.

At one point in 2016, when he was first running for office, Donald Trump said this: I could stand in the middle of Fifth Avenue and shoot somebody, and I wouldn’t lose any voters. That quote came to mind last week when audio from Trump advisor Steve Bannon surfaced, from October 31, 2020, just a few days before the Presidential election.

And of course four days later Trump declared victory when his own campaign advisors told him he had absolutely no basis to do so. What the new Steve Bannon video demonstrates is that Donald Trump’s plan to falsely claim victory in 2020, no matter what the facts actually were, was premeditated. Perhaps worse, Donald Trump believed he could convince his voters to buy it, whether he had any actual evidence of fraud or not. And this same thing continued to occur from election day onward until January 6. Donald Trump was confident that he could convince his supporters the election was stolen, not matter how many lawsuits he lost. And he lost scores of them. He was told over and over again in immense detail that the election was not stolen. There was no evidence of widespread fraud.

Cheney then described how Trump exploited the patriotism of his followers to convince them to attack the country (something we see all the time in court hearings from January 6 defendants).

It didn’t matter. Donald Trump was confident he could persuade his supporters to believe whatever he said, no matter how outlandish. And ultimately, that they could be summoned to Washington to help him remain President for another term. As we showed you last week, even President Trump’s legal team, led by Rudy Giuliani, knew they had no actual evidence to demonstrate the election was stolen. Again, it didn’t matter.

Here’s the worst part. Donald Trump knows that millions of Americans who supported him would stand up and defend our nation, were it threatened. They would put their lives and their freedom at stake to protect her. And he is preying on their patriotism. He is preying on their sense of justice. And on January 6, Donald Trump turned their love of country into a weapon against our Capitol and our Constitution. He has purposely created the false impression that America is threatened by a foreign force controlling voting machines. Or that a wave of tens of millions of false ballots were secretly injected into our election system. Or that ballot workers have secret thumb drives and are stealing the elections with them. All complete nonsense.

The ability to get to the truth, Cheney laid out, is fundamental to remaining a free nation.

We must remember that we cannot abandon the truth and remain a free nation.

In late November of 2020, while President Trump was still pursuing lawsuits, many of us were urging him to put any genuine evidence of fraud forward in the courts and to accept the outcome of those cases. As January 6 approached, I circulated a memo to my Republican colleagues explaining why our congressional proceedings to count electoral votes could not be used to change the outcome of the election. But what I did not know at the time was that President Trump’s own advisors — also Republicans, also conservatives — including his White House Counsel, his Justice Department, his campaign officials, they were all telling him almost exactly the same thing I was telling my colleagues. There was no evidence of fraud or irregularities sufficient to change the election outcome. Our courts had ruled. It was over.

Now we know that it didn’t matter what any of us said, because Donald Trump wasn’t looking for the right answer legally or the right answer factually. He was looking for a way to remain in office. Let’s put that aside for a moment and focus just on what we saw today. In our hearing tonight you saw an American President faced with a stark and unmistakeable choice between right and wrong. There was no ambiguity. No nuance. Donald Trump made a purposeful choice to violate his oath of office. To ignore the ongoing violence against law enforcement. To threaten our Constitutional order. There is no way to excuse that behavior. It was indefensible. And every American must consider this: Can a President who is willing to make the choices Donald Trump made during the violence of January 6 ever be trusted with any position of authority in our great nation again?

Then, minutes after saluting the bravery of women like Cassidy Hutchinson, Cheney pivoted to the historical moment of women’s suffrage.

In this room, in 1918, the committee on women’s suffrage convened, to discuss and debate whether women should be granted the right to vote. This room is full of history and we on this committee know we have a solemn obligation not to idly squander what so many Americans have fought and died for.

Finally, she closed with that great conservative heroine, Margaret Thatcher.

Ronald Reagan’s great ally, Margaret Thatcher, said this: let it never be said that the dedication of those who love freedom is less than the determination of those who would destroy it. Let me assure every one of you this: our committee understands the gravity of this moment, the consequences for our nation. We have much work yet to do, and we will see you all in September.

As I described, her closing comments from the first hearing assumed the mantle of Reagan.

With this speech (and the imagery), Cheney attempted to invoke the mantle of Reagan, her party’s (and our shared generation’s) political icon. In doing so, she attempted to make democracy a religion again, something worth defending.

At the very least, she provided some mythology on which she will rebuild her party.

This message is not for you or I. We are not the audience for the invocation of Margaret Thatcher.

But as Cheney attempts to convince Republicans that Donald Trump made them betray their patriotism, she is pitching the alternative in distinctly female form.

Just before she goes home to lose her primary, badly, this woman is committing to coming back in September to continue the work of trying to persuade her fellow conservatives to believe in the truth again.

Note: Mr. EW and I are headed out on an Irish-sized road trip. Unless something major happens, posting will be light in days ahead.