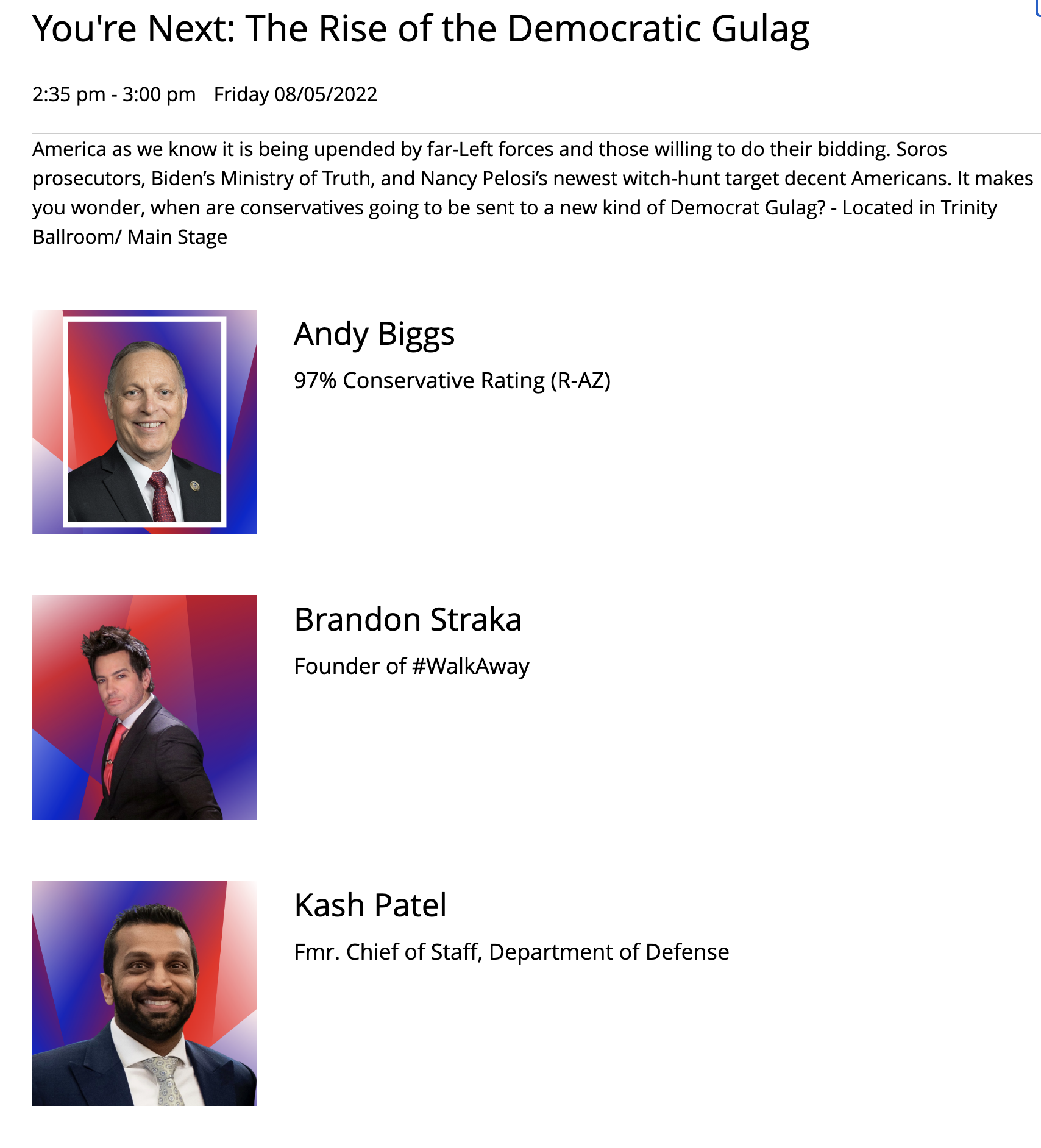 I first published this post on the revelations about Brandon Straka’s misdemeanor plea on August 5 at 2:10PM ET.

I posted it about 29 hours after Judge Dabney Friedrich ordered the Probation Office to provide a report by September 30 about Straka’s compliance with probation; during a status hearing a day earlier, Friedrich admonished Straka about saying things publicly that conflicted with what he had said to the FBI in interviews and said to her at his plea colloquy.

I posted it about 28 hours after FBI Director Christopher Wray responded to one of the only questions raised in an SJC oversight hearing about January 6 that, “And then, of course, I have to be a little bit careful about what I say here but we are continuing to develop some of the more complicated parts of the investigation in terms of conspiracy charges and that sort of thing.”

I posted it minutes before a CPAC panel (sponsored, in part, by a Viktor Orbán-tied NGO) featuring Andy Biggs, Straka, and Kash Patel warning that  “Soros prosecutors” were instituting a “Democrat Gulag.” 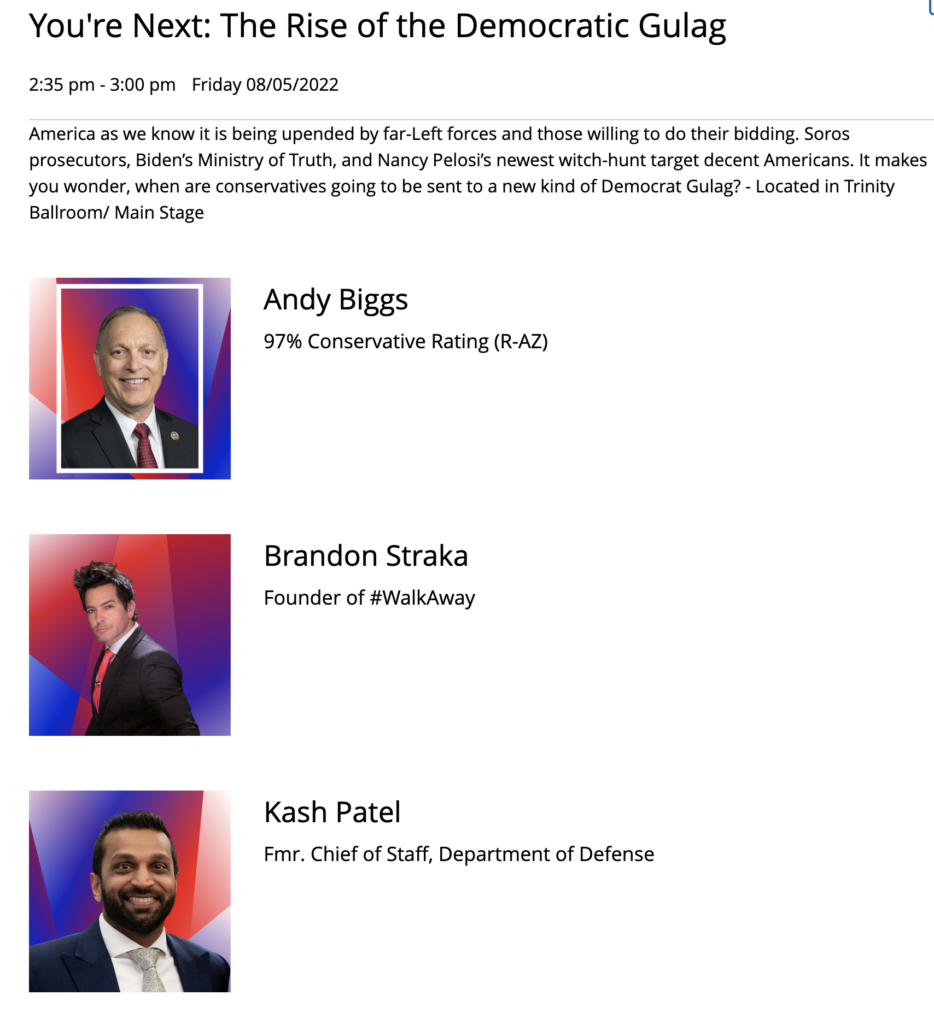 Straka spent most of the rest of that day, Friday — the day after the judge overseeing his probation ordered more scrutiny into the sincerity of claims he made under oath and to the FBI — in a cage, performing the role of a jailed January 6 defendant counting the days until his release, crying.

Some spectators wept. Some threw money into the cage. Others came up close to mutter words of comfort and support to the emotionally distraught man inside, who was alternating sitting on a bare cot with his head in his hands, and writing sad slogans on a blackboard like “Where is Everyone?” Among those in the audience was Zuny Duarte, mother of Enrique Tarrio, the jailed ex-chairman of the Proud Boys facing seditious conspiracy charges for his role in the Capitol. One man, wearing a T-shirt saying “Correctional Officers for Trump 2020” pointed at his chest, making sure the “jailed” activist saw, and said “”I know how it works, man.”

During Thursday’s performance in the J6 cage, the man in the prison had been an actor. But on Friday, the man was none other than Brandon Straka, a self-proclaimed former liberal who founded #WalkAway, a social media campaign encouraging Democrats to ditch their party for the GOP. Straka was a vocal Stop the Steal proponent and activist, and landed in hot water with the feds when he filmed himself from the steps of the Capitol building on Jan. 6.

All of which makes me really glad that, in that post, I reiterated all the concerns I’ve raised in the past about Straka’s treatment, including that the deal given to Straka would backfire.

Plus, it’s not entirely clear whether such pleas will backfire down the road, given that prosecutors have little ongoing means to ensure cooperation, as they would with felony cooperators hoping to benefit from 5K letters supporting leniency at sentencing.

At the time, it looked like a shitty deal by the government, and multiple researchers I know grumbled that the government simply didn’t know what a central role Straka had when they interviewed him just weeks after the riot.

Even in December, there was good reason to question whether DOJ had made a decent deal when it traded information about Stop the Steal organizers in exchange for a misdemeanor plea, rather than building their case, including Straka in a conspiracy to obstruct the vote certification, and then flipping him.

Now, with Straka openly mocking the entire DOJ investigation, there should be real questions at DOJ whether Straka is replaying the Mike Flynn or Jerome Corsi play, reneging on purported cooperation to sabotage the investigation into Trump and his associates.

As a reminder, in Corsi’s case, in an initial interview with Mueller’s prosecutors, they caught him making claims that conflicted with communications records DOJ already obtained. Then, they got him to admit to a grand jury that Stone had asked him to establish a cover story for his “Podesta time in a barrel” tweet in real time, just days after Stone tweeted it. But then — at a time when, Corsi claimed, he was in communication with Trump’s attorney Jay Sekulow, Corsi went on his podcast and amid a dramatic meltdown not dissimilar from the drama we’ve seen from Straka, revealed that prosecutors were trying to force him into a cooperation plea deal with the government. After that point, his interviews with Mueller were a conflicting mishmash that, whatever else they were, made his prior testimony largely useless in any prosecution. It’s likely that an investigation against him was among those referred by Mueller. But he’s also such a batshit crazy person, it’d be hard to hold him accountable for deliberately blowing up interviews with the government.

In Mike Flynn’s case, his competent Covington lawyers negotiated a ridiculously lenient plea deal (in my opinion, one of Mueller’s three greatest mistakes), one that would have gotten the retired General no jail time. During the period he was supposed to be cooperating, he remained in touch with SJC staffer Barbara Ledeen and her husband Michael and Nunes aide Derek Harvey, all of whom kept him apprised of Sara Carter-backed propaganda efforts and Republican Congressional efforts to discredit the investigation. In 2018, Flynn even sent Matt Gaetz a text pushing for more pressure on Mueller. Then, once Bill Barr was confirmed, Flynn fired his competent lawyers and replaced them with Sidney Powell, who with Barr’s collusion, invented a slew of reasons that undermined the investigation against Flynn (in the process, protecting Trump from any Flynn-related obstruction charges). The outcome for Flynn was probably worse. But in the process, Flynn convinced a lot of people who only too late came to understand that both he and Sidney Powell are completely unhinged when they claim that the investigation against him was not a sweetheart deal, but instead a gross abuse of prosecutorial authority.

In both cases, Trump associates or movement operatives identified a cooperating witness and instead turned them into a chaos agent undermining an ongoing investigation. Here, Straka is appearing on a panel with suspected participants in the coup attempt, Andy Biggs and Kash Patel, and cozying up with someone who called for “Marshall Law,” all at a time when DOJ seems to be working on charges arising out of his so-called cooperation.

Given Straka’s recent trajectory, two details of his case from after the time his limited cooperation was made public are noteworthy. First, while Stuart Dornan, a former FBI Agent located (like Straka) in Nebraska remains on Straka’s team, in January, Straka added Bilal Essayli to his legal team, who appears to have taken the lead since, with it striking a far more confrontational tone.

Brandon also objects to the recommendation by the Probation Officer that he be subjected to a discretionary condition of Probation that monitors his electronic communications service accounts, including email accounts, social media accounts, and cloud storage accounts. Brandon also objects to his financial activity being monitored by the Probation Office. These discretionary conditions of Probation are not sufficiently relevant to the offense committed. In United States v. Taylor, 796 F.3d 788 (7th Cir. 2015), the Seventh Circuit reversed a restriction on the defendant’s computer ownership and internet access in a bank larceny case, stating that the restriction was not reasonably related to his prior conviction for incest. In Brandon’s case, emailing, using social media, and using cloud storage has nothing to do with his offense.

Thus, while Dabney Friedrich ordered the Probation Office to conduct a review of what Straka has been up to while he has been engaging in deceitful performance art attacking the case, when she sentenced Straka, she specifically declined to include review of Straka’s social media. Straka has spent the last six months making a mockery of what he said to Friedrich back in January, most often on social media.

Mike Flynn, especially, has become a movement hero for tanking his own case to create havoc for any case against Trump. And Straka seems intent on pursuing just that kind of notoriety.

And it’s not clear what tools DOJ has retained to prevent that from happening.