Women Led The Move To Farming

In Chapter 6 of The Dawn Of Everything, David Graeber and David Wengrow describe the gradual move of Neolithic people to farming, and explore its relation to egalitarianism. The usual story is that our ancestors were roughly egalitarian from the beginning to the Neolithic era 10 to 12,000 years ago. Then we discovered farming, took it up wholesale in what is called the Agricultural Revolution, and almost immediately men took over and excluded women from significant participation in governance. The story has a ring of the Garden of Eden story, in which the sudden possession of knowledge is the end of a golden age.

This story is wrong in almost every detail. Obviously it’s wrong because we have practically no information about social organization among people before the Neolithic. The authors think it’s likely that there were many different forms of social organization, including those which operated differently in different seasons and for specific purposes.

Another issue lies in the definition of farming. We have a single word for this, but all the evidence is that there are gradations of cultivation of plants and animals for human purposes. Foragers certainly observed the plants that kept them alive. It’s easy to imagine that they protected plants that produced fruits and vegetables they liked, and took steps to help them grow. They may have cleared out space for them, pruned them back, and maybe even carried water to them in dry periods. Simple observation and a bit of work would improve the yield and made their lives easier.

In the early Neolithic, beginning perhaps 10-12000 years ago a more organized way of farming developed in the Fertile Crescent. Here’s a useful map identifying some of the sites mentioned by the authors. The authors divide this area into the lowlands towards the South and the uplands and high steppes towards the North and East. 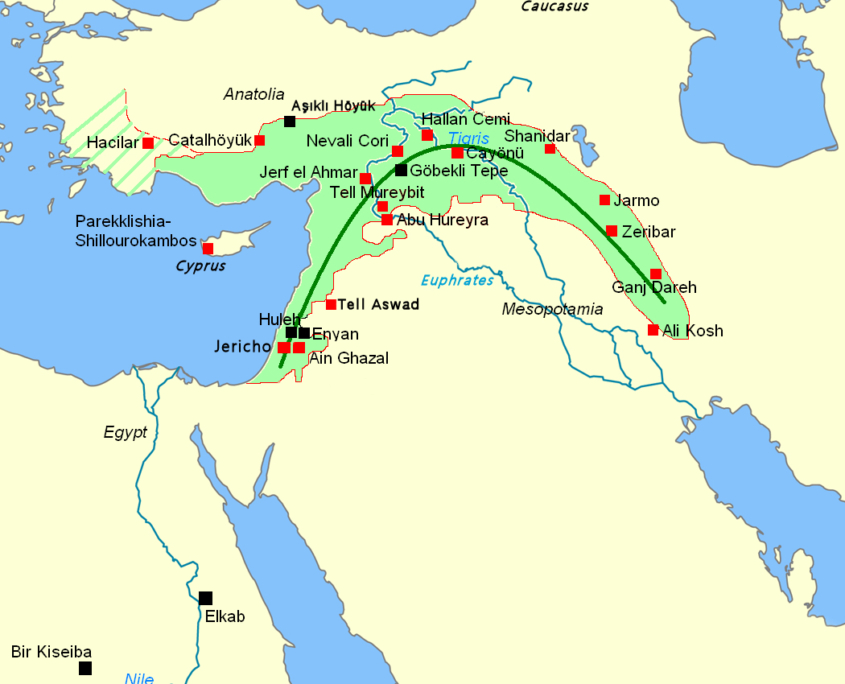 The Lowlands include a lot of marshy muddy areas near rivers and lakes and artesian springs. Lowlands People used mud and clay for building. This created a use for straw, which comes from the stalks of various wild grasses, including wheat, barley and rye. These grew wild in the Uplands. The Lowlands peoples traded shells and other goods from the South for the wild grasses. This gave them both straw and a new source of food, from the seeds.

Lowlands people foraged and hunted, and kept domesticated sheep and goats. They were adept at flood retreat farming. In the spring the rivers, lakes and marshes overflow, and lay down layers of fertile and wet alluvial soil. People just threw seeds on the new soils and crops would grow quickly with minimal labor. There’s no need to till, weed, or water.

Flood retreat farming doesn’t rely on ownership of property, because the fertile areas change from year to year. It also doesn’t require a lot of centralized organization, merely some rules for sharing the crops. Then, over time, people gradually figured out how to domesticate the grasses to produce more of the edible seeds.

The authors point out the gendered assumptions behind the standard story: the idea that it was men who led the move to farming, because farming is hard work, too hard for the ladies. There are other weird reasons based on Genesis and endemic patriarchy.

Consciously or not, it is the contributions of women that get written out of such accounts. Harvesting wild plants and turning them into food, medicine and complex structures like baskets or clothing is almost everywhere a female activity, and may be gendered female even when practised by men. This is not quite an anthropological universal, but it’s about as close to one as you are ever likely to get. P. 237.

In the Lowlands, women were deeply involved with flood retreat farming and other aspects of economic life, and these contributions were recognized in the artifiacts discovered in recent escavation. One example is Çatalhöyük, a town on the above map. It was founded around 7400 BCE and was occupied for about 1500 years, with a population of about 5000. There are no monumental structures or other buildings typical of hierarchical societies. There are a whole lot of small clay figurines of women. These used to be interpreted as goddesses, but that was mostly because of weird projections of Victorian scientists. The authors think they honor the role of women, including old women, in the society.

The authors think that Lowlands men hunted wild beasts particularly in the colder months, and the women ran the forager/planting economy which ran most of the year. This is similar to other societies in which seasonal changes brought social change. The visual arts support the idea that women played a central, if separate, role in economic matters as well as leadership. The authors call it as ‘gynarchy’, or ‘gynaecocracy’. P. 218.

The people of the Uplands, mostly in what is now Central and Southeastern Turkey, relied on foraging and some management of wild crops, and the same domesticated animals as the Lowlands people. But the overall culture was very different. They used stone, not mud and clay, and built monumental structures with violent images carved in relief. Here is a description of the imagery at Göbekli Tepe, which is on the map.

Carved on these stone pillars is an imagery dominated by wild and venomous animals; scavengers and predators, almost exclusively sexed male. On a limestone pillar a lion rears up in high relief, teeth gnashing, claws outstretched, penis and scrotum on show. Elsewhere lurks a malevolent boar, its male sex also displayed. The most often repeated images depict raptors taking human heads. One remarkable sculpture, resembling a totem pole, comprises superimposed pairings of victims and predators: disembodied skulls and sharp-eyed birds of prey. Elsewhere, flesh-eating birds and other carnivores are shown grasping, tossing about or otherwise playing with their catch of human crania …. P. 242.

There is a lengthy discussion of the treatment of human skulls, a practice followed in the Lowlands as well, but very differently. This site shows some of the materials excavated in this region, including the characteristic T-shaped carved megaliths. Wikipedia has several interesting pics here.

The people of these two regions, Uplands and Lowlands, were trading partners, so they knew about each other’s cultures. They had roughly the same kinds of foraging, cultivation, and herding techniques. But their visual culture shows vast difference. The Uplands were as the authors put it “predatory male” and the Lowlands were roughly egalitarian, treating women’s concerns equivalent to men’s. The authors think these cultural differences are the result of schismatogenesis, discussed in the previous post.

The differences between Uplands and Lowlands cultures show that the rise of farming didn’t lead to creation of gender differences, or hierarchical structures. This is another way the the traditional story is wrong.

This brings us to the work of Marija Gimbutas, an expert on the pre-history of Eastern Europe starting in the 1960s.

Gimbutas was largely concerned with trying to understand the broad contours of a cultural tradition she referred to as ‘Old Europe’, a world of settled Neolithic villages centring on the Balkans and eastern Mediterranean (but also extending further north), in which, as Gimbutas saw it, men and women were equally valued, and differences of wealth and status were sharply circumscribed. Old Europe, by her estimation, endured from roughly 7000 BC to 3500 BC – which is, again, quite a respectable period of time. She believed these societies to be essentially peaceful, and argued that they shared a common pantheon under the tutelage of a supreme goddess, whose cult is attested in many hundreds of female figurines – some depicted with masks – found in Neolithic settlements, from the Middle East to the Balkans. P. 216, fn omitted.

Old Europe was destroyed by cattle-herding invaders from the East. By the 1990s Gimbutas’ ideas had fallen into disrepute because they were adopted by Wiccans, pagans and other disfavored groups. The criticism came from men, not from women anthropologists or feminist scholars. Recent studies in population genetic supports Gimbutas’ theory. The treatment of Gimbutas parallels the erasure of the work done by Neolithic farming women.

A Slight Change of Subject

I’ll be taking up a side reading for this series, an essay by Michel Foucault, The Subject and Power, Critical Inquiry, Vol. 8, No. 4. (Summer, 1982), pp. 777-795. It’s 20 pages long, not too difficult, but it will help flesh out some of Graeber and Wengrow’s ideas about group decision-making by our ancestors. There’s a discussion of the key ideas in a series of short podcasts by Greg Sadler on Apple Podcasts .

Pat Philbin Knows Why the Bodies Are Buried Rule of Law: DOJ Obtained Trump’s Privilege-Waived Documents in May