Bill Barr Performed the Corruption He Was Trying To Deny

Perhaps I have a perverse sense of humor.

But between bouts of yelling about the Barr Memo, I’ve been laughing my ass off.

There are a number of reasons I’m laughing, some that I won’t share because I don’t want to spoil what I expect to be the punchline. But one reason I can’t stop laughing is that Robert Mueller managed to get Barr to perform — and put down in writing!! — precisely the corruption Mueller was trying to document: corrupt interference in a criminal prosecution.

I can’t imagine that Robert Mueller intended to elicit this response from Billy Barr and the lawyers who had been overseeing Mueller’s work for almost two years. But because they made the corrupt decision to override Mueller’s studied refusal to made a final conclusion about whether Trump committed obstruction (in my opinion, Mueller viewed Volume II of the Report as an impeachment referral and so did this for separation of powers reasons), they ended up putting together a shoddy memo justifying their decision.

One reason it worked out that way was because Barr and his flunkies were working quickly: a rushed effort over the course of the weekend to substantiate false claims to share with Congress.

According to Barr’s book, he remembers getting the Mueller Report around 1:30PM on March 22, 2019.

As Amy Berman Jackson laid out in a timeline accompanying her decision ordering the release of the memo, starting with a draft of the letter to Congress by Steven Engel at 8:36PM on March 22, 2019 and working through the weekend, five men including Engel (according to some emails quoted by ABJ, Barr was present as well) drafted both the letter to Congress and the declination memo in parallel.

As ABJ pointed out (this was a second basis on which she ruled that DOJ had to release the memo, one the DC Circuit said it didn’t need to consider given all the other reasons it had laid out to uphold her decision), the drafting of the letter to Congress — which she showed in the left column — actually preceded the memo — in the right column — advising Barr that because one goal under the Justice Manual is to,

promot[e] confidence on the part of the public and individual defendants that important prosecutorial decisions will be made rationally and objectively on the merits of each case,

examine the Report to determine whether prosecution would be appropriate given the evidence recounted in the Special Counsel’s Report, the underlying law, and traditional principles of federal prosecution.

The public record, then, shows Barr telling Congress about his prosecution declination before he decided to read the Report or even accept the recommendation of people who claimed to have read the Report. It was all completed over a weekend in which the people supposedly advising him were at the same time being directed by him, everyone together in the Attorney General’s conference room for the weekend. 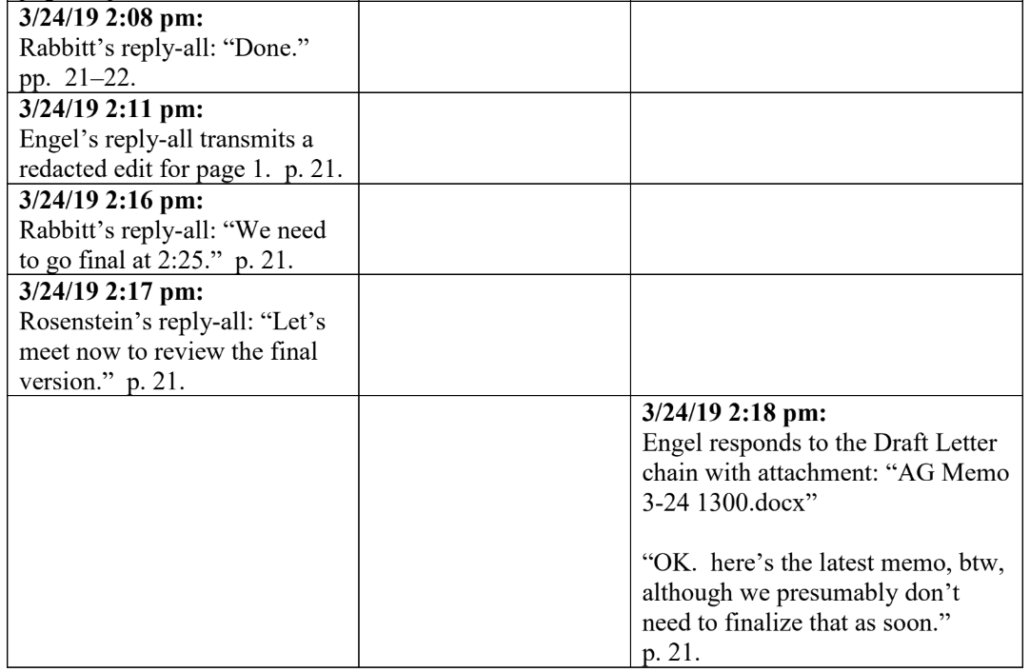 The men finished their letter to Congress announcing that Trump had not committed any crime just after 4:30PM on Sunday and then finalized the declination memo first thing Monday morning.

These men weren’t reading the 400-page Report to figure out what it said (and there’s evidence that neither Rod Rosenstein nor Barr ever read it closely). They were instead trying to figure out how to debunk a Report they had skimmed over the course of seven hours.

And that haste showed up in several places in the memo.

There’s the admission that their recommendations were largely the part of earlier discussions, including from before Barr was hired (as Barr described it, one of the lawyers, Henry Whitaker got pulled in for the first time over the weekend), and therefore only partly about the Report itself.

Over the course of the Special Counsel’s investigation, we have previously discussed these issues within the Department among ourselves, with the Deputy Attorney General, and with you since your appointment, as well as with the Special Counsel and his staff. Our conclusions are the product of those discussions, as well as our review of the Report.

They repeat that admission to explain why they dedicate fully a third of the single page discussing legal precedents to a discussion that happened on July 3, 2018, before the evidence about the Stone interactions with Russia, Paul Manafort’s ties with Konstantin Kilimnik, and Michael Cohen’s interactions with the Kremlin were fully developed.

In our prior discussions, the Special Counsel has acknowledged that “we have not uncovered reported cases that involve precisely analogous conduct.” See Special Counsel’s Office Memorandum to the 600.4 File, Preliminary Assessment of Obstruction Evidence, at 12 (July 3, 2018).

And there’s the footnote explaining that they just weren’t going to cite any facts.

The other reason this memo embodies corruption is that corruption lays at the core of the statute Mueller rested his obstruction analysis on: 18 USC 1512(c)(2) — the same statute DOJ is using in the January 6 prosecutions. So Barr’s 9-page memo had to find a way to claim those actions weren’t corrupt, without entirely parroting the analysis he did in the audition memo he used to get the job, and without acknowledging Barr’s three statements — made under oath during his confirmation hearing — that trading pardons for false testimony would be obstruction (the word “pardon” does not appear in this memo).

Predictably, that discussion was really shoddy. In a key passage, for example, they adopt just one possible measure of corrupt intent, personal embarrassment, something that is only mentioned four times in the Report, always in conjunction with a discussion of at least marginal criminal exposure. Then they use that as a straw man central to their dismissal of Mueller’s lengthy analysis and their decision not to actually engage with Mueller’s analysis.

The Report thus suggests that the President’s exercise of executive discretion for any improper reason, including the prevention of personal embarrassment, could constitute obstruction of justice if it impeded a pending investigation. As we have discussed with you, we do not subscribe to such a reading of the obstruction-of-justice statutes. No reported case comes close to upholding a conviction of such breadth, and a line of Supreme Court precedent, including Arthur Anderson, weighs heavily in favor of objectivity and certainty in the federal criminal law. In order to reach the conclusions in this memorandum, however, we do not believe it necessary to address this disagreement further, because in our view, Volume II of the Report does not establish offenses that would warrant prosecution, even under such a broad legal framework.

Much of their subsequent analysis, dismissing the ten possible examples of obstruction in the Report, was simply factually inaccurate (and in once case, conflicted with something Barr’s own DOJ said a year later). It was not just the then-ongoing Roger Stone conspiracy investigation that refuted the claims Barr had rubber-stamped in secret, and it was not just the ongoing Roger Stone investigation that Barr later took unprecedented steps to thwart so as to protect his basis for exonerating the President. They made claim after claim that wasn’t even an accurate representation of the Report. Just as one measure, as noted, the memo doesn’t use the word pardon at all; the Mueller Report uses it 67 times.

It was only the expectation that all this would remain secret that let Barr and his flunkies entertain the fantasy that any of this could, “promot[e] confidence on the part of the public and individual defendants that important prosecutorial decisions will be made rationally and objectively on the merits of each case.” So they had to keep it secret.

And so, after it was written, a snowball of additional corruption followed, with DOJ making false claims about what was in the memo, and DOJ making more false claims, and Barr taking extraordinary steps to try to ensure that later facts didn’t prove him wrong.

But you don’t have to go further than these nine pages to see that this intervention just dripped with the corruption they were trying to deny.