“The President Was … Working in a Filing Room” 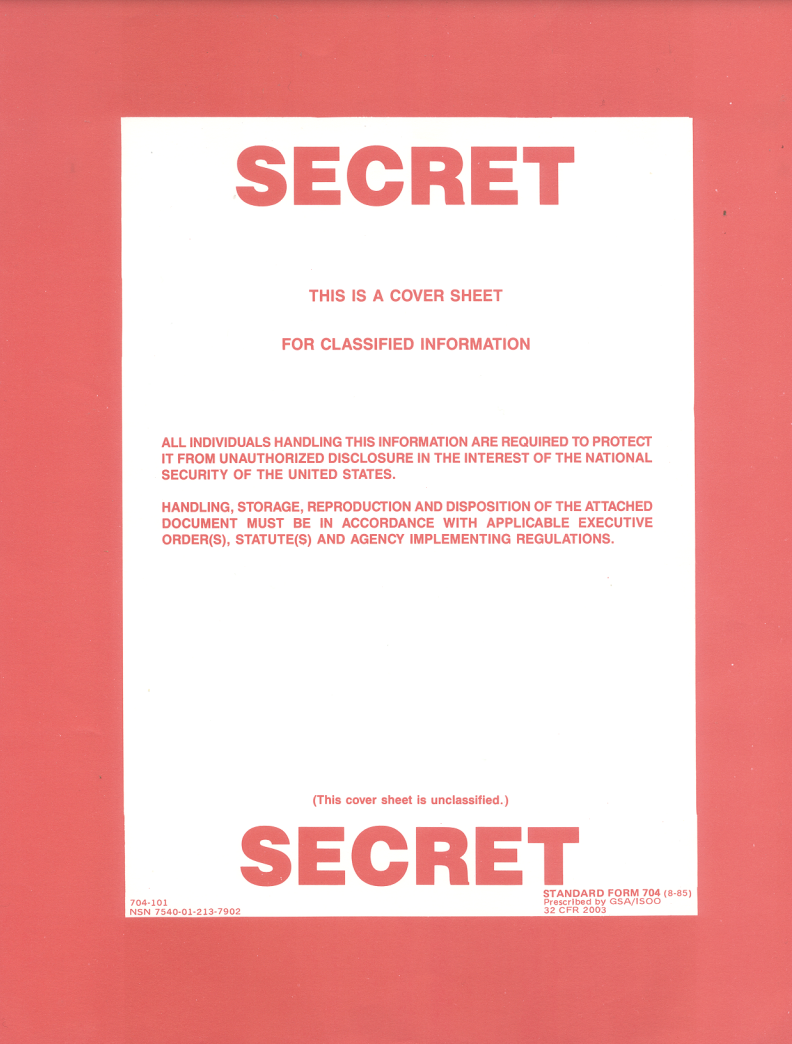 The unredacted part of the affidavit for Trump’s search shows that it incorporated a “statement” Trump put out on February 18, in an attempt to rebut the report that the Archives provided Carolyn Maloney about what was discovered in the 15 boxes Trump finally returned. In a redacted part of the affidavit, there’s something that looks like a second post of some kind, which appears at the end of a nine-paragraph section describing the Archives’ fight to get the boxes back. One possibility is that it’s a second statement Trump issued before the other one.

I’d like to look at the two statements he put out in February, the one that might be that second post, and the one that is included in the affidavit but was illegible in the rendering of it on PACER. Here’s the first one: 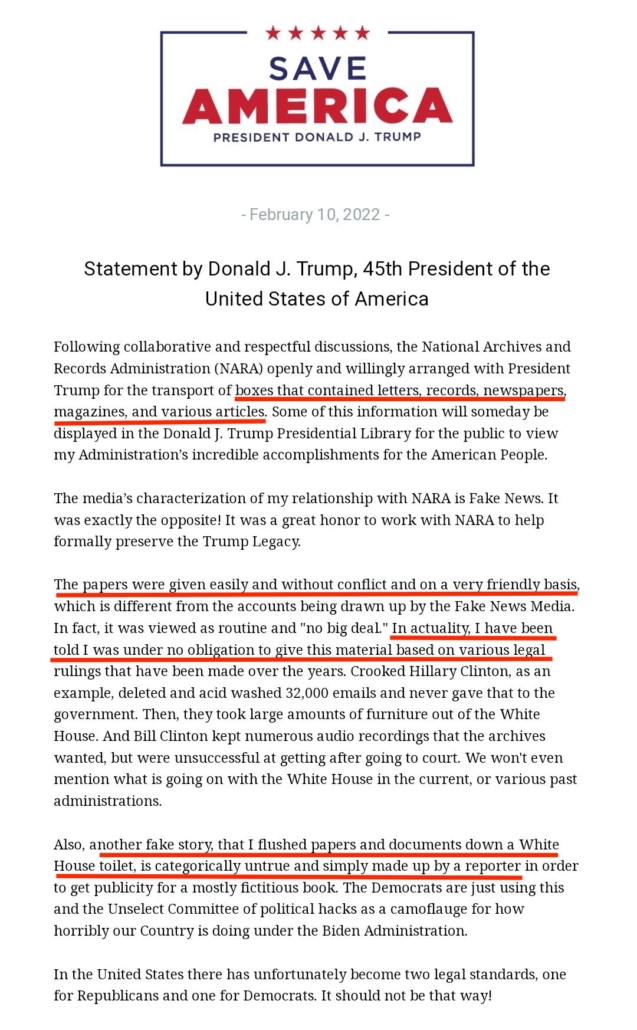 The first attacks Maggie Haberman’s story about flushing documents (but is limited just to White House toilets; she has since reported he flushed stuff while traveling as well).

It also falsely claims that “the papers were given easily and without conflict and on a very friendly basis.” Whatever the seven redacted paragraphs in the affidavit about the fight to get the documents back includes, it would show that that claim was utterly false.

But the statement does claim that “I have been told I was under no obligation to give this material back based on various legal rulings.” We know Trump was told this after the documents were returned. As CNN reported, Judicial Watch’s Tom Fitton was telling Trump just that, citing a ruling pertaining to Bill Clinton.

Not long after the National Archives acknowledged in February that it had retrieved 15 boxes of presidential records from former President Donald Trump’s Mar-a-Lago residence in Florida, Trump began fielding calls from Tom Fitton, a prominent conservative activist.

Fitton, the longtime head of the legal activist group Judicial Watch, had a simple message for Trump — it was a mistake to give the records to the Archives, and his team should never have let the Archives “strong-arm” him into returning them, according to three sources familiar with the matter.

Those records belonged to Trump, Fitton argued, citing a 2012 court case involving his organization that he said gave the former President authority to do what he wanted with records from his own term in office.

The Judicial Watch president suggested to Trump that if the Archives came back, he should not give up any additional records, according to sources with knowledge of their conversations, which have not been previously reported.
While Trump continued to publicly tout his cooperation with the Archives, privately the former President began obsessing over Fitton’s arguments, complaining to aides about the 15 boxes that were handed over and becoming increasingly convinced that he should have full control over records that remained at Mar-a-Lago, according to people with knowledge of his behavior at the time.

Trump even asked Fitton at one point to brief his attorneys, said a person familiar with the matter.

“The moment Tom got in the boss’ ear, it was downhill from there,” said a person close to the former President, who spoke on the condition of anonymity to discuss internal matters.

If Trump’s statement was a reference to Fitton’s advice, it may suggest that advice started even before the Archives publicly confirmed returning the documents (or that Fitton immediately got inside Trump’s head).

What I was most interested in, however, was Trump’s description that the “boxes [] contained letters, records, newspapers, magazines, and various articles,” suggesting that all this excitement was just a fight over 15 boxes of shit. 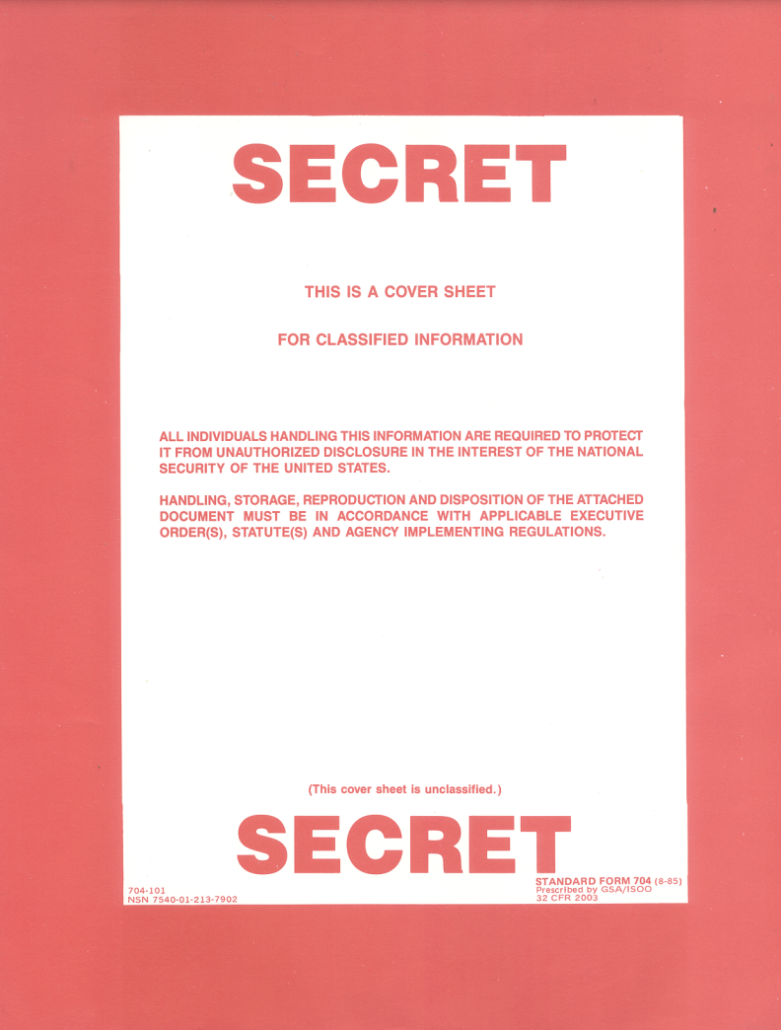 In fact, the affidavit reveals the initial Archives referral explained, those boxes did contain a lot of shit. But intermixed with all that shit were “a lot of classified records.”

The NARA Referral stated that according to NARA’s White House Liaison Division Director, a preliminary review of the FIFTEEN BOXES indicated that they contained “newspapers, magazines, printed news articles, photos, miscellaneous print-outs, notes, presidential correspondence, personal and post-presidential records, and ‘a lot of classified records.’ Of most significant concern was that highly classified records were unfoldered, intermixed with other records, and otherwise unproperly [sic] identified.”

As I understand it, the description that this was “unfoldered” means it had been separated from a classified cover sheet that the government uses to highlight that the document enclosed is classified (they’re color-coded so a person can readily see how secret something is). When people try to hide that they’ve got classified information, one of the first things they do is rip off that cover sheet because it’s such a dead giveaway (which is, after all, the point). As I’ve said elsewhere, the FBI found such cover sheets in Joshua Schulte’s shredder when they did the search of his apartment, which they used to suggest, fairly or not, that Schulte was trying to hide things in the wake of the Vault 7 release.

As Elizabeth de la Vega noted when reading the affidavit, newspaper articles and magazines are the kinds of things that white collar criminals use as filler to try to obscure their crimes.

Trump claimed that the boxes were full of things that might appear worthless, and when the Archives opened them up and looked more closely, that’s precisely what they were full of, aside from the classified documents stripped of their cover sheets. But in a public statement the day after the investigation was announced, Trump tried to insist it was just filler, as if that were going to confuse the FBI or even a building full of committed archivists.

And that’s one reason the second post — the one that we know appears in the affidavit — is so interesting. 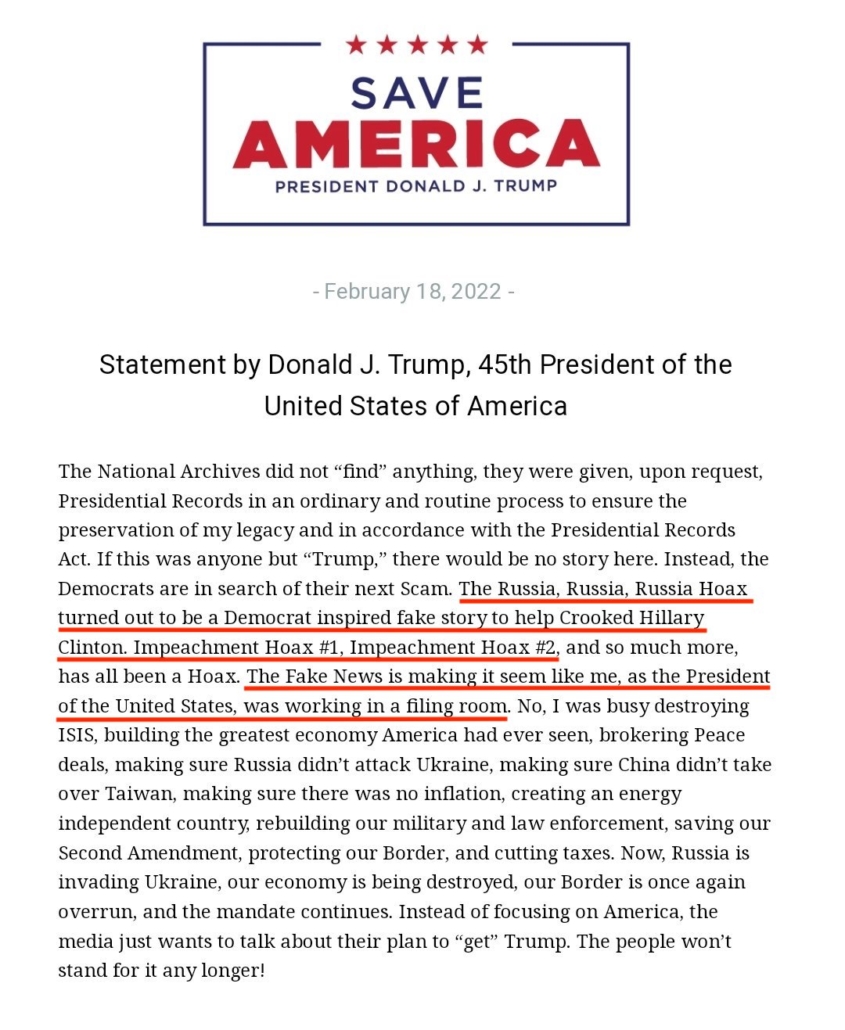 Unsurprisingly, Trump pitched the discovery of classified documents in a continuity with his past investigations — Russia, Ukraine Impeachment, January 6 Impeachment.

Trump’s statement said the same thing when the search broke on August 8. 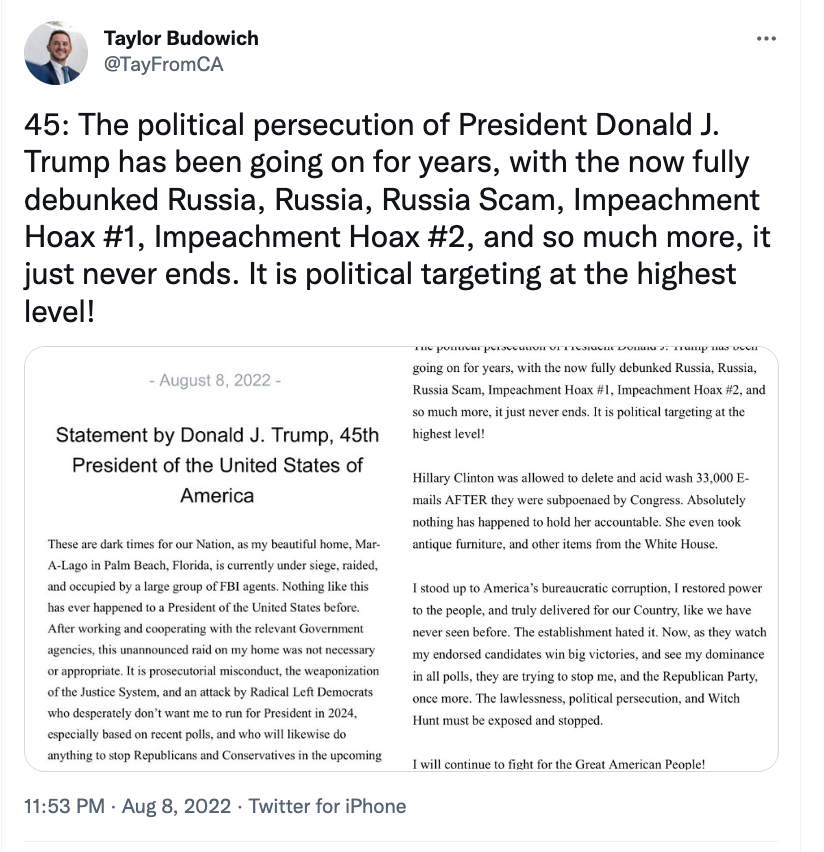 Since then, however, Kash Patel, in a column cited in the affidavit, has given us reason to believe that the real continuity is that (at least some of) the documents Trump had stolen were about the Russian investigation or the Ukraine impeachment.

Patel did not want to get into what the specific documents were, predicting claims from the left that he was disclosing “classified” material, but said, “It’s information that Trump felt spoke to matters regarding everything from Russiagate to the Ukraine impeachment fiasco to major national security matters of great public importance — anything the president felt the American people had a right to know is in there and more.”

And Paul Sperry revealed that one reason Trump was withholding these records was because of the ongoing investigation(s) into January 6. 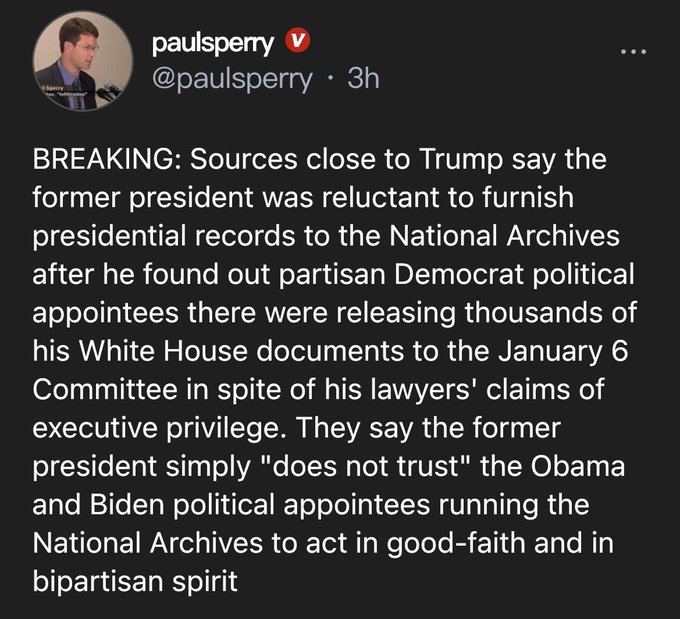 But I’m most interested that Trump’s response deflects by complaining,

The Fake News is making it seem like me, as the President of the United States, was working in a filing room.

In fact, there was a public report that had emphasized Trump’s role in packing up the boxes before they got sent to the Archives, one of the WaPo stories that really led the way on this story in February.

At one point, Archives officials threatened that if Trump’s team did not voluntarily produce the materials, they would send a letter to Congress or the Justice Department revealing the lack of cooperation, according to a third person familiar with the situation.

“At first it was unclear what he was going to give back and when,” said one of these people, who, like the others, spoke on the condition of anonymity to share candid details of a sensitive situation.

Trump was noticeably secretive about the packing process, and top aides and longtime administrative staffers did not see the contents, the people said.

That entire article — which includes details about Trump trying to get the Archives to issue false claims about his cooperation with the investigation — seems to be closely aligned with the kinds of sources that the FBI seems to have subsequently developed.

But the allegation Trump was attempting to rebut — that he personally was involved in packing boxes — has since been matched. The NYT cited multiple sources describing Trump going through the boxes to be returned to the Archives personally.

Mr. Trump went through the boxes himself in late 2021, according to multiple people briefed on his efforts, before turning them over.

More recently (and possibly part of an attempt to blame Mark Meadows for all this) the NYT described how stuff that had accumulated on the dining room table of the White House where he worked was not only getting dumped into two dozen boxes that would not get sent to the Archives, but staffers were bringing additional documents into him there, including the Kim Jong Un letters that — because the Archives knew to go looking for them — have served as a beacon for the stolen documents throughout this story.

Papers he had accumulated in his last several months in office had been dropped into boxes, roughly two dozen of them, and not sent to the National Archives. Aides had even retrieved letters from Kim Jong-un, the North Korean leader, and given them to Mr. Trump in the final weeks, according to notes described to The New York Times.

Although the White House Counsel’s Office had told Mark Meadows, Mr. Trump’s last chief of staff, that the roughly two dozen boxes worth of material in the residence needed to be turned over to the archives, at least some of those boxes, including those with the Kim letters and some documents marked highly classified, were shipped to Florida. There they were stored at various points over the past 19 months in different locations inside Mar-a-Lago, Mr. Trump’s members-only club, home and office, according to several people briefed on the events.

Whether the first of these two posts is the redacted one or not, both times the Archives issued a public statement, Trump issued public, false, denials (and, according to the contemporaneous WaPo story, attempted to get the Archives to do the same).

At that level, then, the statements feel familiar from the Russian investigation, Trump’s well-studied ability to flood the zone with bullshit.

But buried in the two, together, seems to tie closer to actions — Trump’s personal involvement in stuffing the boxes full of shit under which to hide damning documents — that would go some distance to prove deliberate obstruction.

One Big Potentially Pending Question: What Happens to Trump’s Impeachment... Trump Stored Some of the Nation’s Most Sensitive Secrets with His Framed...