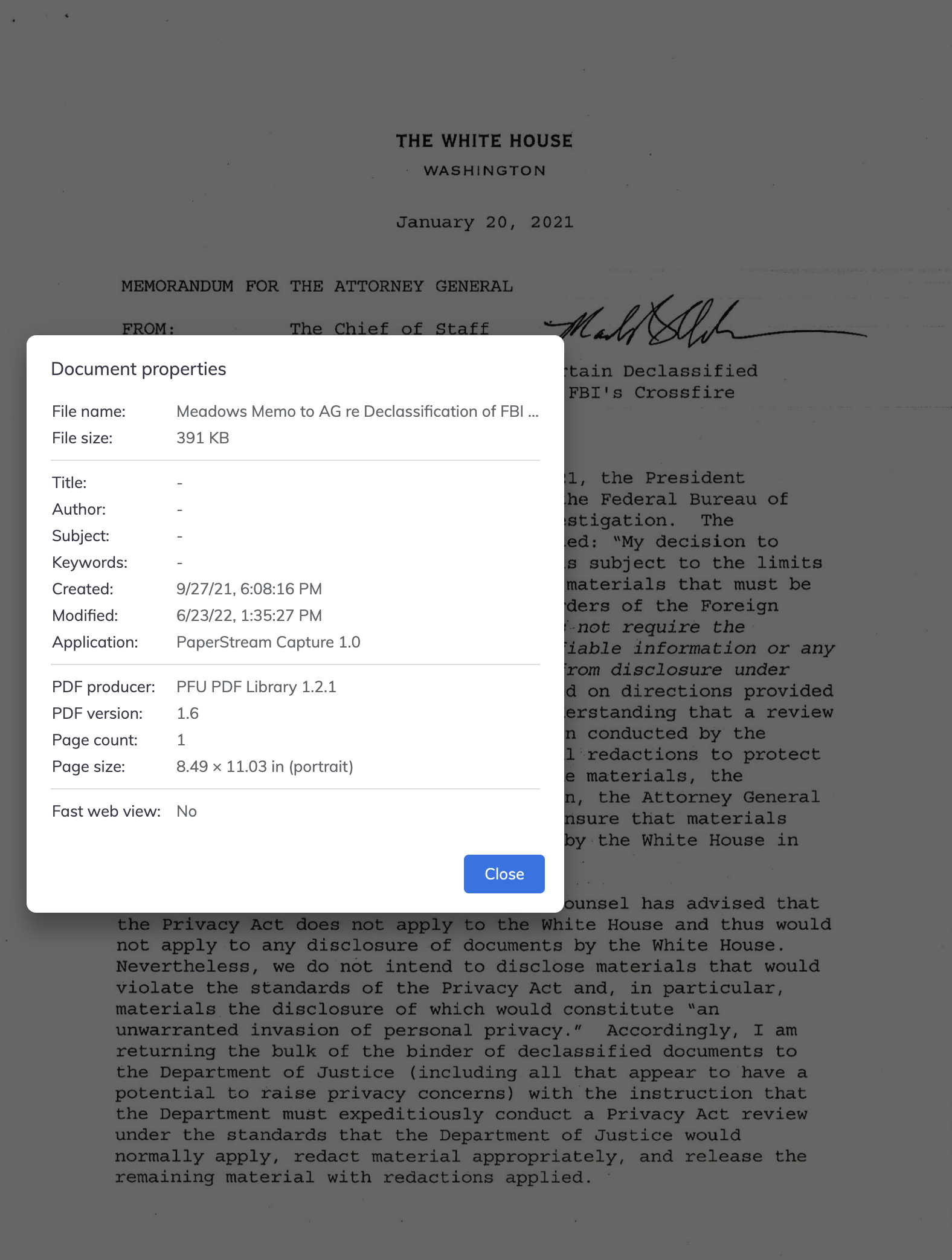 I want to look more closely at the actions of Evan Corcoran (described as “counsel” in last night’s filing before Aileen Cannon) and Christina Bobb (described as “Custodian of Records”) surrounding the June 3 meeting a Mar-a-Lago.

DOJ’s filing describes how DOJ served a subpoena on Trump on May 11, with a return date of May 24.

Through its investigation, the FBI developed evidence indicating that even after the Fifteen Boxes were provided to NARA, dozens of additional boxes remained at the Premises that were also likely to contain classified information. Accordingly, DOJ obtained a grand jury subpoena, for which the former President’s counsel accepted service on May 11, 2022. See Attachment C; see also D.E. 1 at 5. The subpoena was directed to the custodian of records for the Office of Donald J. Trump, and it requested “[a]ny and all documents or writings in the custody or control of Donald J. Trump and/or the Office of Donald J. Trump bearing classification markings [list of classification markings].” Attachment C. DOJ also sent the former President’s counsel a letter that suggested they could comply by “providing any responsive documents to the FBI at the place of their location” and by providing from the custodian a “sworn certification that the documents represent all responsive records.” See Attachment D. The letter further stated that if no responsive documents existed, the custodian should provide a sworn certification to that effect. Id.

Here’s what some of those markings mean:

At first, Trump stalled, asking for a delay, which DOJ initially refused, then granted. Then, on the evening of June 2, Corcoran contacted DOJ and told them to show up the next day.

The subpoena’s return date was May 24, 2022. Counsel sought an extension for complying. After initially denying the request, the government offered counsel an extension for complying with the subpoena until June 7, 2022. Counsel for the former President contacted DOJ on the evening of June 2, 2022, and requested that FBI agents meet him the following day to pick up responsive documents.

As DOJ describes the June 3 meeting that Trump’s side has been leaking about relentlessly, Jay Bratt and three FBI agents showed up and met with Evan Corcoran (“counsel”) and Bobb (“custodian of records”). Notably, DOJ makes no mention of Trump’s presence. That doesn’t mean Trump wasn’t present. But DOJ is certainly not repeating the tale that Trump waltzed in just before he left for Bedminster to meet his Saudi buddies and told DOJ they could have whatever they wanted.

Corcoran handed the documents over in a folder appropriate to the treatment of classified documents and — as DOJ notes — made no claim about Executive Privilege (even though less than a month earlier he had made expansive Executive Privilege claims in communications with Acting Archivist Debra Steidel Wall).

Then, Bobb handed over a declaration (I’ll return to the content below).

The individual present as the custodian of records produced and provided a signed certification letter, which stated in part the following:

I swear or affirm that the above statements are true and correct to the best of my knowledge. See Attachment E. 4

After Bobb handed over the declaration based on “information that has been provided to me,” Corcoran separately made a representation to FBI agents, a representation that would be subject to false statements charges under 18 USC 1001 if it were false.

After producing the Redweld, counsel for the former President represented that all the records that had come from the White House were stored in one location—a storage room at the Premises (hereinafter, the “Storage Room”), and the boxes of records in the Storage Room were “the remaining repository” of records from the White House. Counsel further represented that there were no other records stored in any private office space or other location at the Premises and that all available boxes were searched. As the former President’s filing indicates, the FBI agents and DOJ attorney were permitted to visit the storage room.

According to the DOJ, Bratt and the three FBI agents “were permitted” to visit the storage room. They emphasize here (as the Trump filing described an FBI agent doing at the time) that the search of the storage room was consensual. But they were not permitted to open any box.

See D.E. 1 at 5-6. Critically, however, the former President’s counsel explicitly prohibited government personnel from opening or looking inside any of the boxes that remained in the storage room, giving no opportunity for the government to confirm that no documents with classification markings remained.

As DOJ explains, after the meeting, they developed evidence (we know from coverage that this included surveillance video showing boxes being moved in and out of the storage room, as well as witness testimony describing that Trump stored secret materials in his office) that there was more.

Notwithstanding counsel’s representation on June 3, 2022, that materials from the White House were only located in the Storage Room, classified documents were found in both the Storage Room and in the former President’s office. Moreover, the search cast serious doubt on the claim in the certification (and now in the Motion) that there had been “a diligent search” for records responsive to the grand jury subpoena. In the storage room alone, FBI agents found 76 documents bearing classification markings. All of the classified documents seized in the August 8 search have been segregated from the rest of the seized documents and are being separately maintained and stored in accordance with appropriate procedures for handling and storing classified information. That the FBI, in a matter of hours, recovered twice as many documents with classification markings as the “diligent search” that the former President’s counsel and other representatives had weeks to perform calls into serious question the representations made in the June 3 certification and casts doubt on the extent of cooperation in this matter.

Given the extent of their representations, it is possible that neither Bobb nor Corcoran knowingly lied to the FBI, exposing themselves to false statements charges.

If no one told Corcoran about the stuff in Trump’s office and if all other classified documents had been moved out of the storage room, unbeknownst to Corcoran, he may have believed the following claims to be true:

It’s certainly possible that Corcoran was a victim of a ruse by his client and his client’s flunkies. After all, he had only recently joined Trump’s defense team (though had been representing Bannon for months). He was not a Mar-a-Lago insider.

DOJ, from their surveillance video, would likely know if Corcoran knew his claims to be true or not. But, given that Corcoran refused to let the FBI open any boxes, DOJ may have reason to believe he knew some of his claims were not true.

Similarly, if Corcoran had done the search on his own, with no involvement from “Custodian of Records Christina Bobb,” it’s possible she believed the following to be true:

According to reports, she didn’t do the search. She had every reason to believe that Corcoran — who after all is a real lawyer — had done a diligent search.

I mean, it’s possible that Custodian of Records Bobb — who unlike Corcoran has been part of Trump’s crime spree for a while — also wasn’t a part or aware of the effort to remove documents from the storage room before Corcoran did the search.

It’s the following representation that Bobb seemingly offered up unbidden that makes my spidey senses tingle (particularly given the odd metadata on the copy of the Mark Meadows declassification memo I raised in this post).

Maybe DOJ asked Bobb to make such representations — but it’s not in the backup DOJ included with its filing. The letter Bratt sent Corcoran along with the subpoena said that if Trump chose to simply drop off the remaining classified documents at the local FBI officer,

The custodian would also provide a sworn certification that the documents represent all responsive records.

Trump’s people decided to type up a declaration even in spite of handing documents off personally, and they seem to have included an odd representation about making copies, unbidden.

Particularly given that weird metadata on the John Solomon document, showing creation of a document on September 27, 2021 and the apparent reproduction of that document on June 23, 2022, after the June 3 meeting, after Trump made Solomon a NARA representative, and days after DOJ subpoenaed the surveillance footage.

Trump Stored Some of the Nation’s Most Sensitive Secrets with His Framed... How DOJ Continues to Build Its Case that Trump Improperly Retained National...