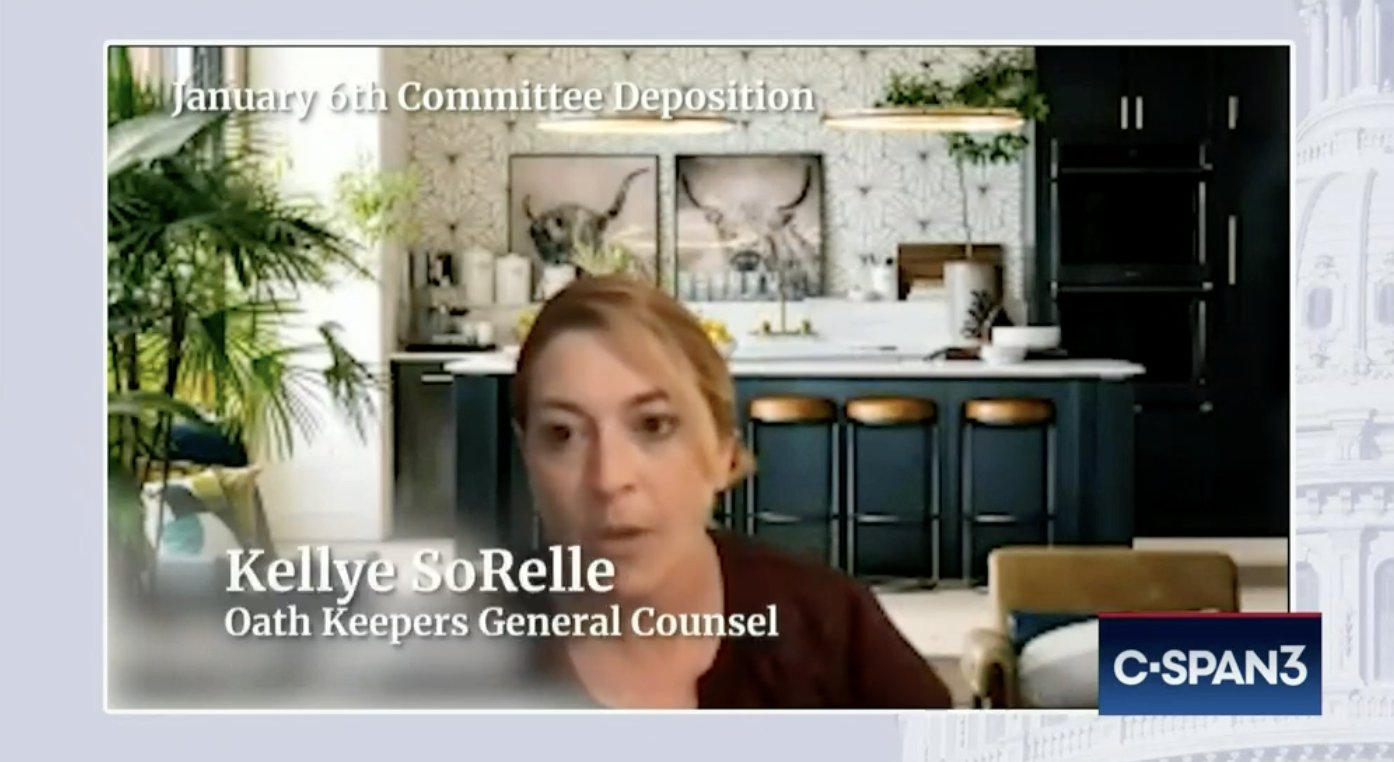 The government arrested Kellye SoRelle yesterday via an indictment charging three counts of obstruction and one count of trespassing. She’s best known as the lawyer for the Oath Keepers, though for a period she was acting as the President of the militia.

That she was arrested was not surprising. It has been known for some time that she’s the person who advised Rhodes to start deleting evidence of his activities on January 6, which he and others did. She even admitted it to MoJo’s Dan Friedman. Those who did delete their comms have all been charged for deleting evidence. The government even included that in Joshua James’ statement of offense, who is now cooperating with the government.

On January 8, 2021, James received a Signal message, in a group chat that included Rhodes, from an individual he understood to be an attorney for the Oath Keepers that stated, “STEWART: YOU ALL NEED TO DELETE ANY OF YOUR COMMENTS REGARDING WHO DID WHAT. You are under zero obligation to leave them up. You/we have not yet gotten a preservation order instructing us to retain those chat comments. So DELETE THEM. I can’t delete them because this is a legacy Signal chat that doesn’t let me delete comments. Only the comment author can delete a comment. So GET BUSY. DELETE your self-incriminating comments or those that can incriminate others. Start now …”

At that level, charging her seems like a way to ensure defendants in the sedition trial cannot foist all the blame for deleting those communications off on an uncharged co-conspirator.  In fact, Gateway Pundit, which has invented some of the central conspiracy theories about this case (including one spun directly by SoRelle), yesterday complained that DOJ only charged SoRelle because she recently agreed to testify in Rhodes’ defense.

Gateway Pundit’s earlier conspiracy theory, based on claims made by another cooperating Oath Keeper witness, Jason Dolan, appears to be one of the ways prosecutors managed to argue that her communications were not privileged.

As such, much of this indictment is about capping off the Oath Keeper case. But there are a few details that I find interesting.

First, unlike Michael Greene (the field commander for the Oath Keepers the day of the attack), who was superseded into the Crowl (lesser) conspiracy case on June 22, SoRelle was charged via indictment with conspiracy by herself. By comparison, when DOJ spun Jonathan Walden off onto his own indictment, the conspiracy charge against him was dropped.

Perhaps DOJ treated her this way because she mostly just interacted with Rhodes on January 6, but since she didn’t do anything meriting a sedition charge, she was charged by herself?

But there are other details that make me wonder whether DOJ isn’t doing something more by charging her.

SoRelle was charged by the same grand jury that did the bulk of the investigative work against all January 6 attackers for all of 2021, but which focused especially on the Oath Keepers. Its work seemed to culminate in January with the seditious conspiracy indictment. Since then, its main public work was to supersede Greene into the lesser conspiracy, 17 months after it was convened, as well as supserseding the Rhodes indictment to tweak how sedition was charged, also in that 17th month.

But the indictment against SoRelle means that grand jury is still at work in the 19th month after it was convened. Grand juries are usually convened for 18 months, so this seems to suggest the Oath Keeper grand jury has been extended, and extended (thus far) solely to charge someone whose phone the government seized last September.

Meanwhile, SoRelle’s indictment seems to have been initialed by Jocelyn Ballantine.

One reason you might charge SoRelle, by herself, on a conspiracy indictment is to add others to it. And while she’s best known for her role with the Oath Keepers and this indictment is closely tied to the Oath Keepers prong of the investigation, she actually has a number of ties to other key players in January 6.

She was present at the January 4, 2021 parking garage meeting between Rhodes and Enrique Tarrio, for example. She would have been a key facilitator for it. At the time, she was serving as the lawyer for both the Oath Keepers and Latinos for Trump. (It was via Tarrio’s involvement in Latinos for Trump that he went on December tour of the White House, arranged by Bianca Gracia, who was also at that garage meeting.)

As Ryan Reilly noted yesterday, SoRelle was also a volunteer for Lawyers for Trump, and in that guise, Rhodes tried to get her to put him in touch with people in Trump’s orbit. SoRelle claims that she declined to do that.

In the weeks leading up to the Jan. 6 attack on the Capitol, Oath Keepers founder Stewart Rhodes tried to get the organization’s general counsel, Kellye SoRelle, to put him in touch with the White House, she told NBC News.

In addition to her work with the Oath Keepers, SoRelle was a volunteer for Lawyers for Trump during the 2020 election and was in contact with many of the people fighting a doomed legal battle to try to overturn the 2020 presidential election and keep former President Donald Trump in office. The contacts include, she said, people in Rudy Giuliani’s and Sidney Powell’s camps, as well as those inside the administration, although she added that she “wasn’t, like, communicating with Trump directly.”

Rhodes wanted her to put him in touch with the White House. “He was hitting me up for a contact,” said SoRelle, a family law lawyer who previously ran for the Texas state House. “He didn’t have any access points.”

As he prepared an open letter calling on Trump to invoke the Insurrection Act in the weeks leading up to Jan. 6, 2021, Rhodes asked SoRelle to send it to the White House. She says she declined.

SoRelle has been caught making false claims to the press before.

Finally, in the clip of SoRelle’s testimony to the January 6 Committee that has been made public, she described how Roger Stone, Alex Jones, and Ali Alexander took the lead on planning the Stop the Steal events.

JAMIE RASKIN: Kelly Sorrell, a lawyer who assists the Oath Keepers and a volunteer lawyer for the Trump campaign, explained to the committee how Roger Stone and other figures brought extremists of different stripes and views together. [Begin videotape]

UNKNOWN: You mentioned that Mr. Stone wanted to start the Stop the Steal series of rallies. Who did you consider the leader of these rallies? It sounds like from what you just said, it was Mr. Stone, Mr. Jones, and Mr. Ali Alexander. Is that correct?

KELLY SORRELL: Those are the ones that became like the — the center point for everything. [End videotape]

For over a year, I’ve been describing that the elegant thing about the obstruction conspiracy charges DOJ has used to charge the Oath Keepers, Proud Boys, and others, is those separate conspiracies might one day start to coalesce via the nodes between them. Kellye SoRelle has, by all appearances, been charged in a conspiracy with the Oath Keepers.But if she also conspired on other aspects of January 6 with other people and organizations, including White House lawyers, then the various existing conspiracies might network into a larger conspiracy.

Update: Corrected that SoRelle stepped down as President when Rhodes was arrested.

No One Puts Roger Stone in a Box Return to Sender: DOJ Seized Evidence that Up to 90 Highly Sensitive Documents...