In the government’s response to Trump’s motion for a Special Master, it revealed that it had gotten Beryl Howell to unseal two subpoenas served on representatives of Trump. (Zoe Tillman first noted the unsealing.)

After Obtaining Evidence Indicating that Additional Classified Records
Remained at the Premises, DOJ Initially Sought Their Return Through the
Issuance of a Grand Jury Subpoena2

2 The former President disclosed this subpoena and a subpoena for video footage at the Premises in his filings to this Court. See, e.g., D.E. 1 at 5-6. Thereafter, on August 29, 2022, Chief Judge Howell in the District of Columbia authorized the government to disclose to this Court these grand jury subpoenas and material discussed herein.

Howell has now unsealed both the government’s emergency request for unsealing and her order granting it.

The government basically explained that they wanted to unseal the subpoenas because Trump lied about the circumstances of, at least, the May 11 subpoena.

[I]n light of the inaccurate or incomplete facts asserted in the SDFL Motion, and as discussed more fully below, the limited disclosure the Government is seeking here is “needed to avoid a possible injustice.”

The government request debunks two things we already knew to be untrue: Trump’s claim that he had conducted a diligent search, and his claim that when Jay Bratt and three FBI agents visited Mar-a-Lago, they were allowed to “inspect” the storage room. As DOJ describes, they “were allowed only a brief view of the storage room and were expressly told that they could not open any boxes to review their contents.”

But the government request emphasizes a third point that elaborates on their strategy behind the investigation: DOJ wrote the May 11 subpoena to cover all documents in Trump’s possession with classification marks, regardless of where they were and how they got there. The government addressed this twice. First, DOJ noted that it drafted the subpoena so as to prevent Trump from withholding documents based off a claim he had declassified the materials.

The government notes that the subpoena sought documents “bearing classification markings,” and therefore a complete response would not turn on whether or not responsive documents had been purportedly declassified.

Although the SDFL Motion indicates that FPOTUS directed his staff to conduct a review of boxes moved “from the White House to Florida,” the subpoena was not so limited, instead seeking “[a]ny and all documents or writings in the custody or control of Donald J. Trump and/or the Office of Donald J. Trump bearing classification markings,” without limitation to where they were stored.

Obviously, DOJ had reason to make this emphasis, beyond just asking for documents with classified markings to avoid getting into a fight over whether Trump had declassified them. Possibly, they have reason to know that some of the documents have already left Mar-a-Lago — maybe they traveled with Trump to Bedminster when he left on June 3. Possibly, they want to avoid Trump claiming he can keep classified documents that he accessed for the first time as President while at Mar-a-Lago, which would otherwise effectively exempt any document that never got moved back to the White House from the subpoena. Or possibly, they have reason to believe that Trump obtained documents from other agencies of government — like the NSA — and brought them directly back to Mar-a-Lago without stopping at the White House.

DOJ’s emphasis that the subpoena covered all records, whether they had left Florida, whether they had come from the White House, had never been moved back to the White House, or came from other agencies is important because — as a slightly longer account of what Corcoran told Bratt on June 3 makes clear — Corcoran limited his own representations about remaining classified documents to those that had been moved from the White House. The bolded language did not appear in DOJ’s Response; the italicized language did, but appears more significant given DOJ’s comment.

[C]ounsel for FPOTUS stated that he had been advised that all records from the White House were stored in one location at Mar-a-Lago, a basement storage room, that the boxes in the storage room were the “remaining repository” of records from the White House, and he additionally represented to government personnel his understanding that there were no records in any other space at Mar-a-Lago.

The bolded language suggests that Corcoran may have been lied to, meaning he’d be a witness, but not a subject, in the investigation.

The filing doesn’t address another discrepancy between Trump’s public claims about the June 3 meeting and DOJ’s: Whether the Former President ever stopped in at the meeting. Trump claims he did.

President Trump greeted them in the dining room at Mar-a-Lago.

DOJ says only two Trump people were at the meeting: Evan Corcoran and Christina Bobb.

If Trump wasn’t present at the meeting, it’s possible Corcoran and Bobb pulled the meeting together for the first day that Trump would be gone to Bedminster, possibly even without telling him.

There’s one more detail about the June 3 meeting that’s may be new in the request for unsealing: According to Bratt and the FBI agents who got to glimpse into the storage room, there were around 50 to 55 boxes in the storage room.

[T]hey were explicitly prohibited from opening any of the approximately fifty to fifty-five boxes that they observed.

The inventories released so far suggest that the FBI searched at least 73 items in the storage room. While some of those items may have been bags of golf clubs or old furniture, this detail suggests as many as 18 boxes may have been moved back into the storage room after Bratt left, more than covering all the boxes that identified so far to have documents marked classified in them.

For all the new details about the May 11 subpoena, the request for unsealing reveals almost nothing about the second subpoena DOJ obtained. Indeed, there’s a  section that may address the subpoena that is entirely redacted. 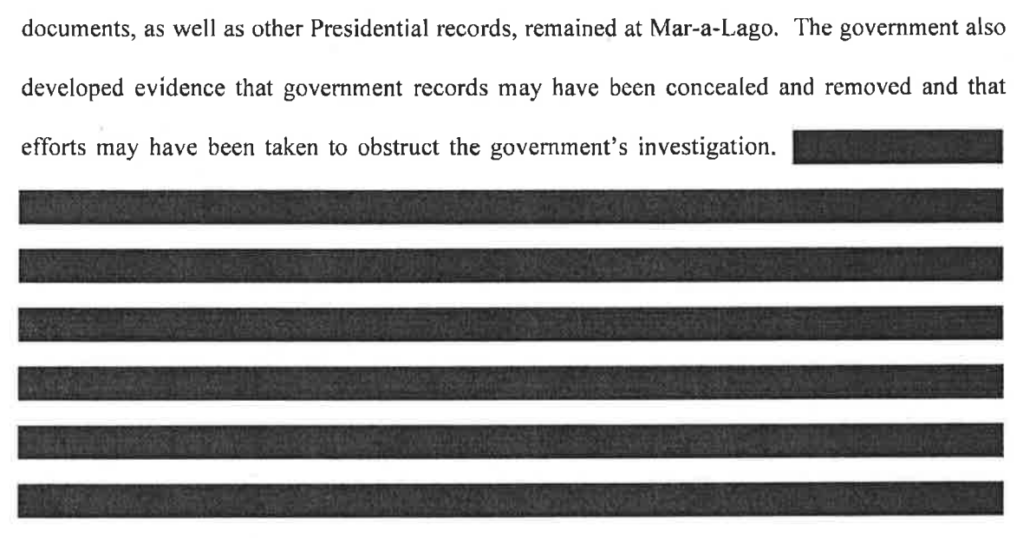 In none of the unsealed discussion of the surveillance video subpoena does DOJ mention its date.

Judge Howell does, though. In her authorization, she permits the government to disclose “another grand jury subpoena out of this district issued to the Trump Organization on June 24, 2022.”

That date is two days after the date Trump gave for the subpoena, both in anonymous sourcing to reporters and then in his motion for a Special Master.

In the days that followed, President Trump continued to assist the Government. For instance, members of his personal and household staff were made available for voluntary interviews by the FBI. On June 22, 2022, the Government sent a subpoena to the Custodian of Records for the Trump Organization seeking footage from surveillance cameras at Mar-a-Lago. At President Trump’s direction, service of that subpoena was voluntarily accepted, and responsive video footage was provided to the Government. [my emphasis]

It’s possible, but highly unlikely, that Howell got the date wrong. But because the government included this paragraph from Trump’s filing in its own request, Howell may have noted the discrepancy in the date.

It’s the kind of detail she tends to pick up.

If the date Trump is using is inaccurate, it may suggest several things. First, I noted here that Bruce Reinhart pointedly observed that no one who purports to own MAL had intervened. It’s the kind of comment one might make if one were aware that Trump played games with the ownership of MAL in an attempt to avoid service of a subpoena. That is, perhaps there is a June 22 subpoena, served on the Office of Donald J. Trump, and after he refused to respond, DOJ simply served a subpoena on Trump Organization, which has enough of its own legal problems right now it doesn’t need Trump to exacerbate them.

Or perhaps Trump was deliberately obscuring the real date, possibly to hide some tie between Kash Patel’s public claims on June 22 to have been made a Trump representative to the Archives and the subpoena.

In authorizing the release of the grand jury material, Howell emphasized the procedural nature of her decision. Because Trump’s request created another judicial proceeding, she could release the grand jury materials under FRCP 6(e)(3)(F). That requires that DOJ show a particularized need to unseal the material, which Howell describes as the need to “meaningfully [] respond” to Judge Aileen Cannon’s order.

Howell did not comment on two arguments DOJ made to get there: that an injustice might occur if Cannon ruled on the Special Master request based on a false understanding of events obtained from Trump’s lies to her and that there was no chance that revealing the subpoenas might harm someone who would later be exonerated, one of three reasons that would normally rule against unsealing grand jury materials.

But in revealing a different date for that second subpoena, June 24 as opposed to June 22, Howell may be pointing to another Trump lie.

Update: May 11, the date of the initial subpoena was a Wednesday. June 22, the date Trump claims he got the subpoena, is also a Wednesday, with June 24 a Friday. If Wednesday is the normal day for the grand jury, then maybe there were two subpoenas.