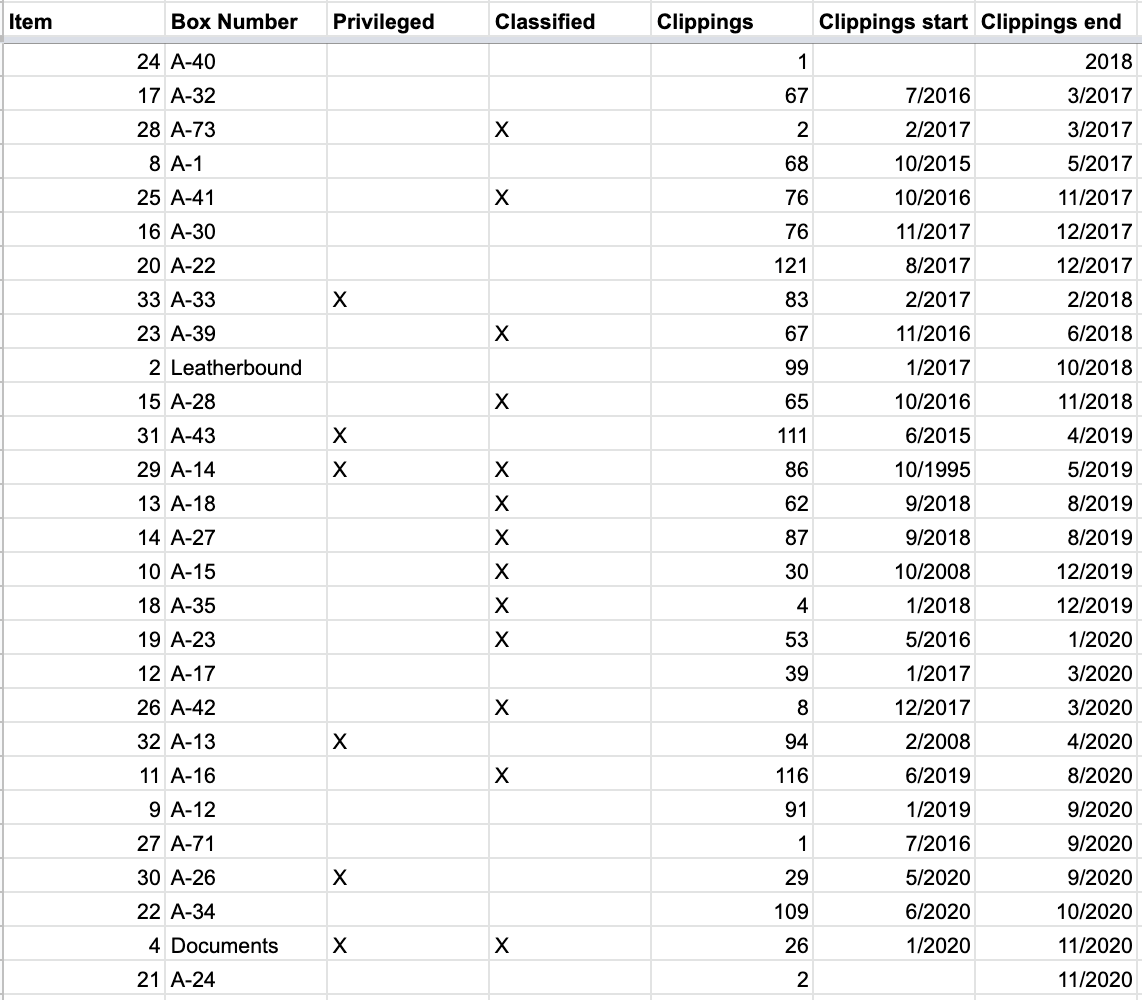 Although the SDFL Motion indicates that FPOTUS directed his staff to conduct a review of boxes moved “from the White House to Florida,” the subpoena was not so limited, instead seeking “[a]ny and all documents or writings in the custody or control of Donald J. Trump and/or the Office of Donald J. Trump bearing classification markings,” without limitation to where they were stored.

They clearly believed then that some of the documents Trump stole might not be at Mar-a-Lago. Indeed, Evan Corcoran’s insistence on June 3 that he was instructed to search only the records that had moved from the White House to Florida may have exacerbated that concern.

That makes something revealed in the more detailed inventory released yesterday more alarming.

None of the boxes seized by the FBI include press clippings that postdate November 2020.

The most innocent explanation anyone has offered for Trump’s theft of government documents — call it the Maggie Haberman theory of compulsive pack-rattery — is that Trump just kept making piles of documents, including both news articles and Top Secret government documents, on the dining room table where he preferred to work. Those stacks got put into boxes, and staffers kept swapping out the boxes as they filled up. That was the filing system employed by the most powerful man in the world.

That explanation does seem to accord with many of the boxes of the detailed inventory. In the inventory, the FBI counted every fucking clipping Trump kept, along with the dates. Over the last month, FBI Agents have cataloged 1,673 clippings, dating back to October 1995, that were stored with government documents. Every box has at least one press clipping; even Trump’s leatherbound box of treasures had almost 100 clippings stored alongside his Top Secret/SCI documents. And if you track the entire inventory by the date ranges of the press clippings, you see that those boxes overlap.

There seems to have been no Chief of Staff, not even retired General John Kelly, who could cure him of the habit.

But none of those boxes — not even the collection including 357 government documents seized from his office (see item 4) — includes a single clipping that post-dates November 2020.

There are no clippings from the final two months of his Presidency — the months he plotted a coup.

Perhaps Trump already turned in those boxes. Perhaps the post-November 2020 press clippings were delivered to the Archives on January 17, 2022, just a year late.

But Paul Sperry said that the reason Trump was withholding records from the Archives was to keep documents of interest to the January 6 Committee from being available to the Archives that it might turn over to the Committee. (h/t Ron Filipkowski) 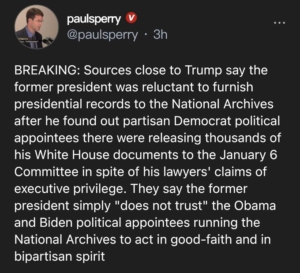 And if the dates of the clippings in the boxes are any indication of the dates of the records in the boxes, then it suggests the FBI may still not have all the records Trump stole from the White House. Indeed, it suggests the FBI might still be missing some of the most important records, not just for the January 6 Committee’s work, but also for our understanding of key policy steps Trump took in that period, including developments in the Abraham Accords and possibly even Trump’s withdrawal from the Open Skies Treaty (which happened close to the end of November 2020). This is the period, too, when Acting Secretary of Defense Chris Miller cut off briefings to the incoming Biden folks.

Beryl Howell Says the Surveillance Video Subpoena Was June 24, Not June 22 On Serena
Scroll to top