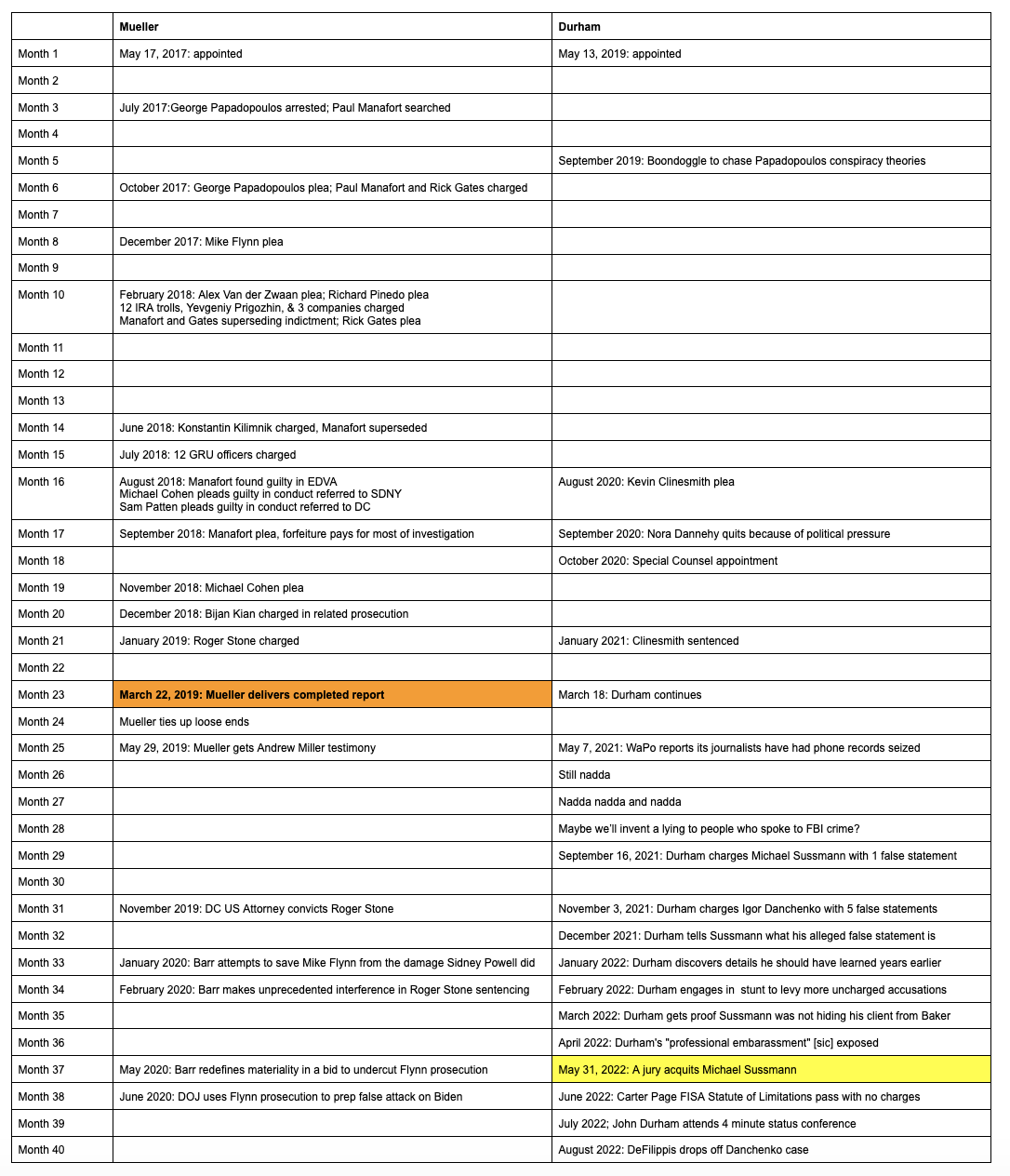 Since he was charged on November 3 last year, Igor Danchenko and his legal team have been virtually silent, mostly watching as John Durham’s team repeatedly failed to meet classified discovery dates.

But as we draw closer to the October 11 trial date, there has been more activity.

On August 1, there was a hilariously short status conference, all of four minutes, where Durham himself showed up. On August 21, Andrew DeFilippis — the most abusive of Durham’s prosecutors — dropped off the docket. Last week, Durham’s team asked for and got permission to file their motions in limine under seal — perhaps in an effort to avoid the inflammatory claims they made during the Michael Sussmann trial. Even the Classified Information Procedures Act (CIPA) conference, at which the two sides argued over how much classified information Danchenko needs at trial and whether the government can substitute information to make it less sensitive, seems to have ended inconclusively. Afterwards, Judge Anthony Trenga deferred decision until September 29, in part because the two sides are seemingly still trying to work things out amicably.

But things may about to get interesting.

In a motion to dismiss the indictment filed Friday, Danchenko calls one of the government’s arguments (pertaining to the four Sergei Millian-related charges) “desperate at best.” The bases Danchenko challenges the indictment against him largely map some of the problems I laid out here: The questions FBI asked are not ones about the topics Durham has charged and Danchenko’s answers — he convincingly argues — were true.

For nearly a year, from January 2017 through November 2017, Mr. Danchenko sat through numerous voluntary FBI interviews and provided hours of truthful information to the government. Four years later, Special Counsel John Durham returned an indictment that alleges Mr. Danchenko knowingly made false statements about two matters when he: (1) acknowledged to the FBI that he talked with PR Executive-1 about issues “related” to the content of the Company Reports but stated that he did not talk about “specific” allegations contained in one of the reports; and (2) made four consistent statements to the FBI about his equivocal “belief” that an anonymous man who called him may have been Chamber President-1. These equivocal and ambiguous answers were prompted by fundamentally ambiguous questions, are literally true, and are immaterial as a matter of law.

Further, the government’s attempt here to stretch § 1001(a)(2) to a defendant’s equivocal and speculative statements about his subjective belief appears to be a first. And it would be a first for good reason. In order to meet its burden of proof in a case predicated on a subjective belief the government would need to prove not whether something did or did not happen but that the defendant did not truly subjectively believe what he said happened or did not happen. That would be a heavy burden in any case and it is an insurmountable one here.

Danchenko also argues (as Sussmann did) his claimed lies could not be material, in this case because Durham’s materiality claim is based in the influence of the Steele dossier, which (as Danchenko notes) he didn’t even know about, much less write.

Significantly, the indictment does not allege that Mr. Danchenko’s allegedly false statements themselves were material, but instead alleges only that the Company Reports, and the information contained in those reports, some of which allegedly came from Mr. Danchenko, were material.

In my series of posts on Danchenko’s case, I even missed some problems with the indictment. I had noted, for example, that Durham entirely misrepresented the question Danchenko was asked about Chuck Dolan on which Durham built one of the false statement charges. Durham claimed the FBI asked Danchenko if Dolan was a source for Danchenko. As I noted and as Danchenko does in this MTD, the question was actually whether Dolan was another sub-source directly for Christopher Steele.

But Danchenko notes two more problems with the charge.

First, he was asked whether Dolan and he “spoken” about the matters in the dossier; and to prove they did, Durham provides an email.

Count One alleges that Mr. Danchenko made a false statement when “he denied to agents of the FBI that he had spoken with PR Executive-1 about any [specific] material contained in the Company Reports, when in truth and in fact, and as the defendant well knew, PR Executive-1 was the source for an allegation contained in a Company Report dated August 22, 2016 and was otherwise involved in the events and information described in the reports.”

For “proof” of the alleged false statement under this charge, the indictment relies on an email exchange between PR Executive-1 and Mr. Danchenko on or about August 19-20, 2016.

More problematic still, in context, the question was about whether Danchenko and Dolan had spoken about allegations that remained in the dossier after Steele wrote them up, a conversation that (because neither had seen Steele’s reports in real time) could only have taken place after January 11, when BuzzFeed published the dossier.

In arguing that his comments about Dolan weren’t material, Danchenko later confirms something I suspected: the FBI wasn’t much interested in the dossier report at the heart of Durham’s purported smoking gun evidence.

[T]he government apparently never even asked Mr. Danchenko about the specific information regarding Campaign Manager-1 that was contained in the relevant Company Report.

Remember: Durham tried to make this exchange stand in for the pee tape report (it worked with the press, too!!). But he didn’t actually charge anything pertaining to the pee tape.

Danchenko similarly notes that the government never asked Danchenko about something else Durham treated as a smoking gun: Emails from after the time, in July 2016, when Danchenko failed to meet someone he believed to be Sergei Millian, one of which Danchenko turned over himself in his first meeting with the FBI.

Danchenko was never asked about that email because it did nothing to clarify whether Chamber President-1 had been the anonymous caller and because it was, in truth and in fact, ultimately immaterial to the FBI’s investigation.

And with regards the Millian questions, Danchenko notes that Durham doesn’t even argue his responses were material. He instead argues the dossier was (though I think Durham will rebut this one).

(1) the FBI’s investigation of the Trump Campaign relied in large part on the Company Reports to obtain FISA warrants on Advisor-1, (2) the FBI ultimately devoted substantial resources attempting to investigate and corroborate the allegations contained in the Company Reports, including the reliability of Danchenko’s sub-sources; and (3) the Company Reports, as well as information collected for the Reports by Danchenko, played a role in the FBI’s investigative decisions and in sworn representations that the FBI made to the Foreign Intelligence Surveillance Court throughout the relevant time period. Indictment at 4.

He notes, as I did, that his answers in interviews after the first two Carter Page applications could not have been material to those applications.

Motions to dismiss rarely work, and this one is unlikely to either (though I think Danchenko’s argument with respect to the Dolan charge is particularly strong).

But if Durham adheres to the same sloppiness they did in the Sussmann case, the MTD may be useful to Danchenko for other reasons, besides framing the case for Judge Trenga. MTDs are supposed to rely entirely on what is charged in the indictment. But in addition to the observations that Danchenko was asked neither about the Dolan email Durham has made central to the indictment nor Danchenko’s own emails after the failed July 2016 meeting in NYC, Danchenko’s argument is also premised on there not being further evidence to substantiate what appears on the face of the indictment. For example, if Durham had testimony from Dolan about conversations with Danchenko about the pee tape, Danchenko might not have argued as he has. And Danchenko explicitly states that the indictment does not claim a July 2016 phone call Danchenko believed to be from Millian did not happen — a weakness in the indictment I raised several times.

Nine months into discovery, Danchenko would know for a fact if Durham had conclusive proof that he didn’t get a call. He’d probably know the substance of Dolan’s testimony against him.

But in response to an attack on the shoddiness of this indictment, Durham may well — as he did with Sussmann — talk about what they would prove at trial, not what was in the indictment. If Durham has proof the call didn’t happen or thinks he can argue it, he may well reveal it in response. In the Sussmann case, anyway, Durham didn’t have the goods.

And along the way, Danchenko has nodded to where this will go if the indictment is not dismissed. Most notably, Danchenko asserts, as fact, that the FBI investigation into Millian long preceded his interviews.

Indeed, the FBI was already investigating Chamber President-1’s potential involvement with Russian interference efforts long before it had ever interviewed or even identified Mr. Danchenko.

The scope and results of the investigation into Millian is presumably one of the classified details that Danchenko has argued (correctly) he needs at trial, and if he has, then Trenga will be quite familiar with the substance of the evidence. If Danchenko does make an argument about the folly of relying on Millian as a key witness, then Danchenko’s trial may be even more of an indictment of the Durham investigation than Sussmann’s was.

In fact, early in this motion, Danchenko makes the contrast I keep making: between Mueller’s substantive results and Durham’s failure thus far to undermine that substance with shoddy false statements indictments.

Between January and November 2017, Mr. Danchenko not only answered every question to the best of his ability, even when asked to speculate, but also provided emails and contact information for other potential sources of information in the Reports. The investigation into the Reports was ultimately completed by Special Counsel Robert S. Mueller, III, in or about November 2017 and the Special Counsel’s office closed its entire investigation into possible Trump/Russia collusion in March 2019. Approximately thirty-four individuals were charged by Mueller’s office, including several for providing false statements to investigators. Mr. Danchenko was not among them. To the contrary, not only did investigators and government officials repeatedly represent that Mr. Danchenko had been honest and forthcoming in his interviews, but also resolved discrepancies between his recollection of events and that of others in Mr. Danchenko’s favor.

In or about April 2019, and just one month after Mueller had concluded his investigation, then President Trump’s Attorney General, William Barr, tapped John Durham, the U.S. Attorney for the District of Connecticut, to review the origins of the Russia investigation and efforts by law enforcement to investigate the Trump campaign. Just prior to the end of former President Trump’s term, Barr appointed Mr. Durham Special Counsel to carry out his investigation. Through the instant indictment, the Durham Special Counsel’s Office now claims to have uncovered false statements made by Mr. Danchenko that the previous special counsel did not, despite relying substantially on the same evidence, the same statements, and the same agents involved in the Mueller investigation.

While he doesn’t say it explicitly, in several places Danchenko makes clear that both Mueller and Michael Horowitz will affirm that, for years, Danchenko was consistently viewed as candid and his candid views were material to both those investigations.

And because Durham is now claiming otherwise, based off issues that weren’t even of interest to investigators, Durham risks putting himself on trial in October.