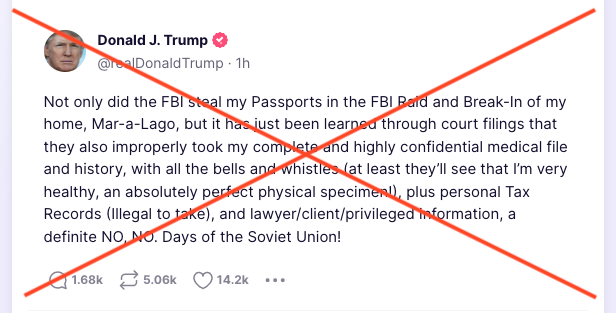 The WaPo report that one of the documents seized from Trump’s resort pertained to “a foreign government’s military defenses, including its nuclear capabilities” is currently 27-paragraphs long. Of those 27 paragraphs, three quote Trump’s attorney, Christopher Kise, using the story to claim that the harm Aileen Cannon imagined in her opinion enjoining the government had come to pass.

Christopher Kise, a lawyer for Trump, decried leaks about the case, which he said “continue with no respect for the process nor any regard for the real truth. This does not serve well the interests of justice.”

“Moreover, the damage to public confidence in the integrity of the system simply cannot be underestimated. The responsible course of action here would be for someone — anyone — in the Government to exercise leadership and control. The Court has provided a sensible path forward which does not include the selective leak of unverifiable and misleading information. There is no reason to deviate from that path if the goal is, as it should be, to find a rational solution to document storage issues which have needlessly spiraled out of control.”

Kise, the Trump lawyer, cited that part of the judge’s reasoning Tuesday night, saying “the damage to public confidence in the integrity of the system simply cannot be underestimated.” He said the special master appointment by the court provides “a sensible path forward which does not include the selective leak of unverifiable and misleading information. There is no reason to deviate from that path if the goal is, as it should be, to find a rational solution to document storage issues which have needlessly spiraled out of control.”

These Kise quotes may have been added in by Josh Dawsey, who was added to the story after an earlier version that lacked the Kise quotes.

Seven paragraphs are dedicated to laying out Aileen Cannon’s opinion, including some passages that are so ridiculous, they deserve a factcheck.

She also reasoned that a special master could mitigate potential harm to Trump “by way of improper disclosure of sensitive information to the public,” suggesting that knowledge or details of the case were harmful to the former president, and could be lessened by inserting a special master into the document-review process.

Cannon wrote that Trump’s position as a former president means “the stigma associated with the subject seizure is in a league of its own,” and that a “future indictment, based to any degree on property that ought to be returned, would result in reputational harm of a decidedly different order of magnitude.”

The fact that over a third of this story reporting on leaked information about the things found in the search focuses on the manufactured prospect that leaks to the press about the investigation would be worse than leaks of the actual documents advises some caution — especially since several of the claims in the story are attributed to single sources and all are described only to be “familiar with” the search or the matter.

A document describing a foreign government’s military defenses, including its nuclear capabilities, was found by FBI agents who searched former president Donald Trump’s Mar-a-Lago residence and private club last month, according to people familiar with the matter,

Only the president, some members of his Cabinet or anear-Cabinet-level official could authorize other government officials to know details of these special-access programs, according to people familiar with the search, who spoke on the condition of anonymity to describe sensitive details of an ongoing investigation.

It was in this last batch of government secrets, the people familiar with the matter said, that the information about a foreign government’s nuclear-defense readiness was found.

One person familiar with the Mar-a-Lago search said the goal of the comprehensive list was to ensure recovery of all classified records on the property, and not just those that investigators had reason to believe might be there.

Investigators grew alarmed, according to one person familiar with the search, as they began to review documents retrieved from the club’s storage closet, Trump’s residence and his office in August. The team soon came upon records that are extremely restricted, so much so that even some of the senior-most national security officials in the Biden administration weren’t authorized to review them. One government filing alluded to this information when it noted that counterintelligence FBI agents and prosecutors investigating the Mar-a-Lago documents were not authorized at first to review some of the material seized.

As described, these sources are familiar with the need to recover certain documents and the complexities about classification and clearance. The description of how, during the search, alarm grew about the sensitivity of the documents is sourced to someone who seems unfamiliar with public details about where this document, by definition, would have been found (in the leatherbound box). While I suspect it’s not, it could even come from someone — like a Secret Service agent onsite or someone watching video remotely — who merely observed the search.

Like I said, while I have no reason to doubt the report (indeed, I think it highly plausible, based on the date, that one of the visible documents in DOJ’s picture from the search pertains to JPCOA and therefore to Iran’s “military defenses, including its nuclear capabilities”), I would caution about the motives of those behind it. 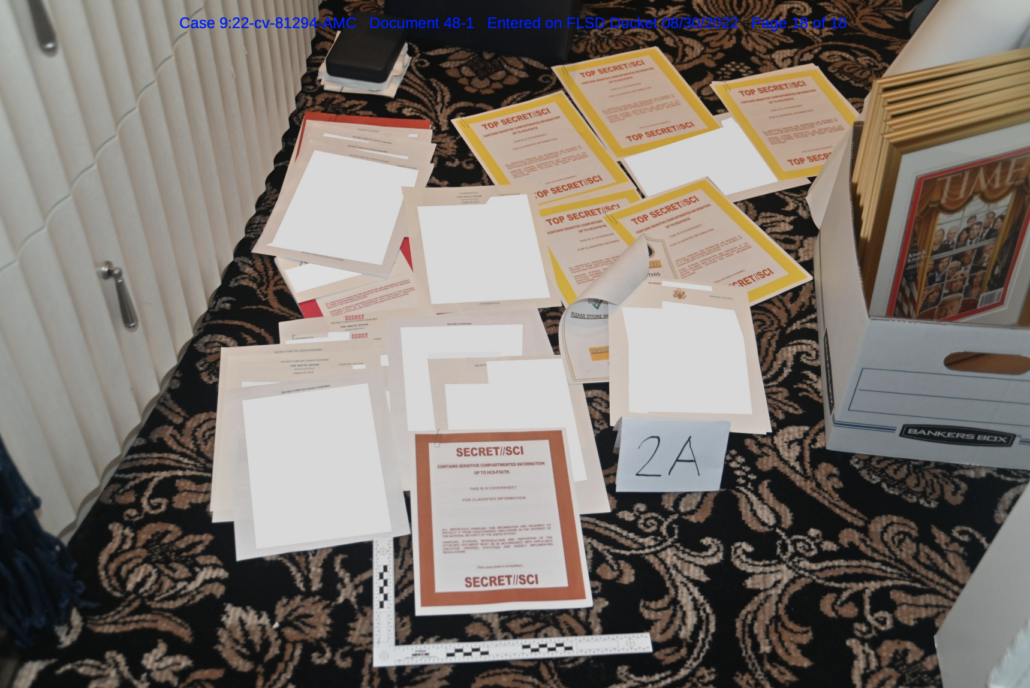 Close to the beginning of last Thursday’s hearing, Judge Cannon had the filter lawyers share their status review with Trump’s lawyers.

MR. BRATT: So, Your Honor, we have the two filter attorneys present here. We have not seen it; and, certainly, our main concern would be that there was nothing in there that would then get out and taint members of the investigative side. So I would defer to them as to whether the whole document can be unsealed and provided to Defense or whether only a portion. I’m sort of speaking blindly about it.

THE COURT: Good afternoon. My question, Mr. Lacosta, is directed only at the status report not exhibits A or B. What is your position with respect to making that available to Plaintiff’s counsel?

MR. LACOSTA: Your Honor, we have no objection with the pleading itself being made to Plaintiff’s counsel, both the pleading, exhibit A and exhibit B, but we would ask that it remain under seal.

THE COURT: Okay. So for now, please, I’ll ask my team to make those documents available to Plaintiff’s counsel. And because those are lengthier, I’m going to take a 15-minute break for Plaintiff’s counsel to review them. The Court is in a brief recess.

THE COURT: You may be seated. All right. Has Plaintiff’s counsel had enough time to review that status report?

MR. KISE: We have, Your Honor.

THE COURT: Okay. What is your position on the unsealing of the report itself, minus the exhibits?

MR. KISE: Your Honor, respectfully, we think that both the report itself and the exhibits should remain under seal at this time. The report itself does make some substantive references to privileged material; and, in an abundance of caution, we want to make sure that we don’t get into a situation where there is a waiver claim of some kind. So, respectfully, we would ask the Court to keep it under seal. There may come a time, after we understand a little bit more, where that position could change; but certainly for now, Your Honor, we don’t want to have a waiver situation.

THE COURT: Okay. Well, seeing as it is a joint request at this point to continue the seal as to the filter review team status report and associated exhibits, that document will remain under seal, and the parties should be careful to adhere to that in their presentation today.

This step was actually fairly central to the asymmetry that Cannon used to find some ownership interest in medical and tax documents that Trump might not even own. Bratt couldn’t rebut Cannon’s representations about the material because he is specifically prevented from seeing these materials until after privilege determinations get made.

Significantly, Kise seemed amenable to releasing the content of the material so long as it didn’t involve a waiver of privilege claims.

And Trump just tweeted about precisely this material — material the filter attorney had asked to share with Trump’s lawyers last Thursday, but Cannon prohibited.

There should be no way that a nuclear-related document was mentioned in that privilege progress report. Based on court filings, there are just three items that were initially placed in the potentially privileged bucket that have classification markings.

One is Top Secret (buried along with clippings from 1995!). But at least as described, it doesn’t bear compartment markings.

Trump team has knowledge about things that Jay Bratt does not, but that doesn’t likely extend to that nuclear document.

I mean, Trump likely has knowledge of what documents were in his leatherbound box. But unless he’s confessing to storing that in his closet directly, his team is likely not the source for that part of this story.

On TeeVee this morning, Marco Rubio — who seems to be staking his Senate seat on groveling to Trump — claimed that the only people who have knowledge of the investigation are at DOJ (he also egregiously misstated what happened after Trump refused to fully comply with a subpoena for the marked documents). That’s definitely not true of the most sensitive documents seized there, which an entire apparatus of secrecy must be involved with. But as of last Thursday, we can say with certainty that there are aspects of the investigation that Trump’s team knows more about than the guy leading the investigation.

And Trump is already making claims about things that prosecutors cannot and have not accessed.

NARA May Have Pre-Existing Legal Obligations with Respect to Documents Covered... Hatchet Speed Arrested on a Small Part of his $50,000 “Panic Buying”...