Hatchet Speed Arrested on a Small Part of his $50,000 “Panic Buying” Arsenal 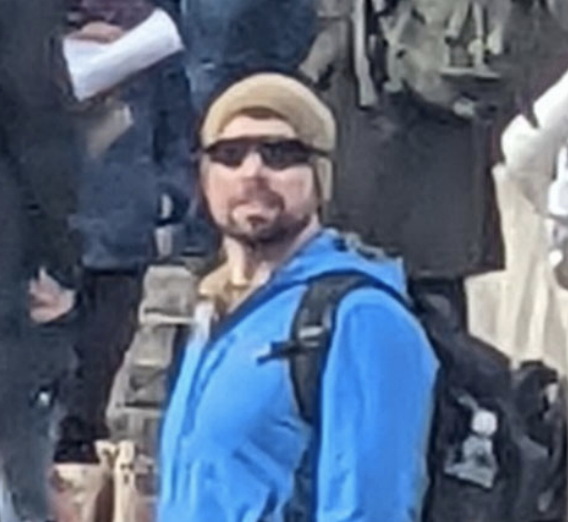 Last month, I reminded readers that every single one of the 5,000 people in whom the FBI might still have an investigative interest relating to January 6 — even just the trespassers — could be the next Ricky Shiffer: a Trump supporter mobilized by Trump’s false claims of victimhood who attempted to breach an FBI office, only to be killed in a shootout with police.

That’s because there are 5,000 more like him out there.

I don’t mean, there’s a shit-ton of Trump supporters who could go postal at any moment. There are far more than 5,000 of them.

I mean, there are 5,000 people who participated in January 6 that the FBI might have predicated investigative interest in, but has not yet arrested.

That’s a fairly conservative number. In recent days, DOJ passed the 850 arrest mark for January 6 defendants. There are probably 1,500 to 2,000 more people who entered the Capitol on January 6 whose arrest would be comparatively easy (because their trespass is fairly easy to prove) who have not yet been arrested. There are probably 250 identified suspected assailants still at large (over 530 people, including those who’ve been arrested, are listed on the FBI site). And there were probably 10,000 people who breached the external barricades but did not enter the building that DOJ would only arrest if there were something extra — the political profile of Ryan Kelley or Couy Griffin, the pre-existing Deferred Prosecution Agreement of Owen Shroyer, conspiracy ties like Stewart Rhodes — to justify the arrest. Sure, the people who attended the January 5 rally, as Shiffer did, were more likely to participate in more radicalized online networks; those people weren’t in DC just to hear the loser of an election speak.

But at every moment that DOJ has been investigating the leaders that orchestrated January 6 (which provably started within weeks of the attack) and at every moment that DOJ has been investigating Trump’s other criminal acts, DOJ and FBI have been trying to deal with the growth of political violence that Trump has deliberately fostered. DOJ spent the weeks after January 6 doing triage, trying to arrest enough people to get visibility on the very real plans for follow-on attacks before or at the Inauguration. DOJ spent the year after January 6 trying to incapacitate the militia networks that served as an organizing structure for the attack. And DOJ has spent the last six months, as it turned more overtly to investigate several sets of crimes by the former President, trying to anticipate which of those 5,000 veterans of January 6 would, alone or in concert, attempt to reignite a civil war.

I hope that, given the Shiffer example, impatient people who’ve never bothered to understand the crime scene itself will remember that everyone they’ve dismissed for a year as low-level January 6 trespassers may be the next Ricky Shiffer. It’s easy to imagine that if you just arrest Trump all that political violence will dissipate. But that wouldn’t even have been true in 2019, if Mueller had indicted, and it sure as hell isn’t true now. And every step DOJ takes to get closer to arresting Trump, or even just hold the butchers like Fitzsimons who took up arms on January 6 accountable, the mob of people that Trump radicalized on January 6 remains an urgent threat.

In that post, I referenced an earlier one focused on January 6 misdemeanants where I explained why a similar misdemeanor arrest, that of Hatchet Speed, might be among the trespassing arrests that carried far greater significance. 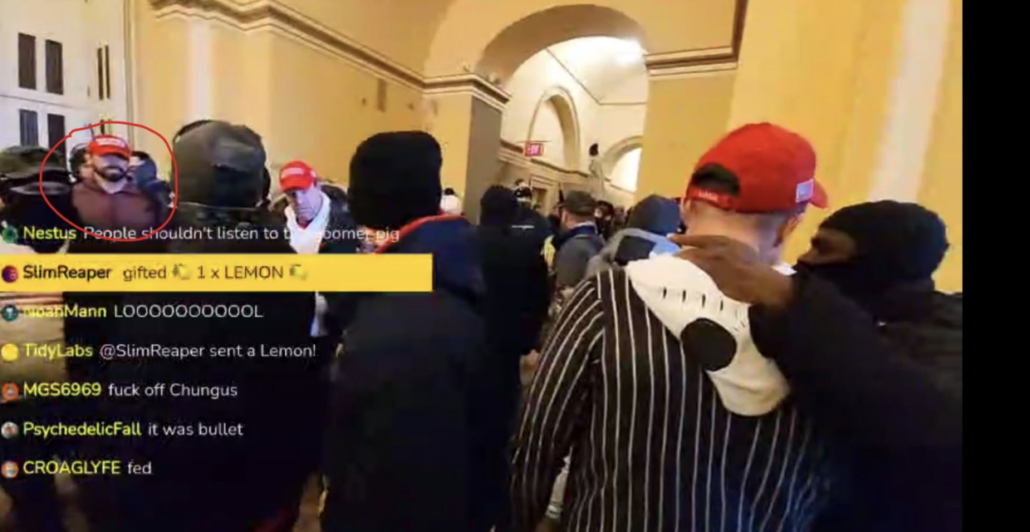 One reason I said that is because a cleared defense contractor with ties to the Proud Boys — who in his arrest affidavit was described as just another face in the crowd — poses a particularly urgent concern.

This is the kind of guy — a cleared defense contractor who went to the insurrection with some Proud Boys “with whom he keeps in contact” — whose cooperation DOJ has used fruitfully in the past. He’s also the kind of guy who presents the ongoing urgent concern about our Deep State being riddled with militia sympathizers.

It turns out that, by the time the FBI arrested him for the DC crime, they already knew he spent the months after Joe Biden’s inauguration “panic buying” an arsenal of weapons and speaking approvingly of a whole ideological swath of terrorists.

That was disclosed yesterday in an affidavit unsealed along with an indictment for three unregistered silencers in Virginia (Seamus Hughes first found the arrest).

5. The FBI has obtained evidence that, in the months following January 6, 2021, SPEED purchased numerous firearms and firearm parts. In a meeting with an FBI undercover employee (UCE-1), SPEED made comments suggesting that he was “panic buying” during this time.

7. Financial statements and other evidence collected in the course of the investigation reveal that SPEED purchased more than $50,000 at firearm and/or firearm part retailers, including the purchase of the twelve firearms described above, in the months after January 6, 2021. For example, financial statements from one of SPEED’s credit cards show that, just in the one-month period between February 15, 2021, and March 16, 2021, SPEED made the following purchases at firearms and/or firearm part retailers:

At a meeting in March, Speed described to an undercover FBI officer how he liked to read Eric Rudolph and Ted Kaczynski so he could figure out how to improve on their game plans.

13. At the meeting on March 1, 2022, SPEED stated that he thought what Rudolph did was a mistake and that the bombing did not accomplish anything. But SPEED noted that Rudolph “was a right winger that got tired of what was happening and he wrote a book over his several year[ s] running from the FBI.” SPEED said that he “thought that was cool and … lover d] the fact that [Rudolph] can say what he did because he ha[ d] nothing to lose by writing [the book].” SPEED noted that he was “trying to find more books like that because [he] love[d] reading about people that are like ok, yeah, you’re assassinating bad guys, that’s cool, but if it’s approved then you’re always killing the small fry, you’re never actually going after the people who actually … ,” and then trailing off.

14. During the same meeting, SPEED also stated that he “like[ d] to read more stuff like that, like Ted Kaczynski,” who is commonly known as the “Unabomber.” SPEED stated the following (with my emphasis added):

Kaczynski wrote a manifesto and once again, like the stuff he did was not effective, but I can commiserate with where he was coming from. Because I think as people who can see their country fall deeper and deeper into wherever we’re going, we all know we have to do something so it’s useful to see what worked and what didn’t work. So, it’s useful to get into these people’s heads and you know, try and come up with a better game plan than they had.

15. During a meeting with UCE-l on March 15,2022, SPEED discussed Eric Rudolph again. In doing so, SPEED suggested Rudolph went wrong because he targeted rich people, when it is not about the money. SPEED said that instead it is “about power.” [emphasis FBI’s]

Speed spoke approvingly of kidnappings and talked about how he might pick victims.

27. In this conversation, SPEED continued by describing how kidnappings would be more effective than killing people. SPEED stated the following:

[K]idnappings are harder than killing people but they’re more effective. What I would love to see is you take somebody out, and they simply disappear. Nobody knows what happened to them. That means we can’t report on it, the media doesn’t know how to spin it. … And all of those people who were left behind have … no way to close that bridge, no way to know if they’re in danger. … We need to foster distrust within the opposite side, just like they do for us…. If you leave nothing behind, they never find the body.

This affidavit was submitted in conjunction with his arrest in June (and was the basis for putting him on house arrest with it). Since then, though, he has been permitted to attend weekend drill exercises as a member of the Navy Reserve at (!!!) Andrews Air Force Base.

Yesterday’s indictment feels like a stub for something else. It’s based on his possession, when he was arrested in June, of those three silencers. And while the government submitted his bond conditions in that docket, it’s not even clear whether he remained in possession of the three silencers after he was released after his June arrest.

EDVA started the paperwork to arrest him last Wednesday, September 2. That was two days after he requested to travel to Tampa Bay, ostensibly for a medical appointment, on September 11.

A number of militia members charged in January 6 are from the area. And Sarasota is where a lot of Trump’s — and Mike Flynn’s — post January 6 plotting has taken place.

This arrest presumably also derails any attempt Trevor McFadden would make (as he suggested he might back in July), at a scheduled status hearing on September 30, to accept a plea from Speed and release him with a hand-slap.

This is a man with a highly trained skillset and an arsenal who has been thinking a lot about terrorism in recent months. But before June, he was just another January 6 trespasser in the crowd.