There’s a guy in Florida who participated in the attack on democracy on January 6 about to go on trial on October 3 for hoarding classified documents in his home.

No, not that guy.

I’m talking about Jeremy Brown, the Oath Keeper charged with trespassing for January 6, but also charged with possession of illegal weapons and classified documents in Florida. Brown’s is an instructive example of what normally happens when a disgruntled former government employee hoards government secrets and allegedly plots the overthrow of constitutional government.

It started with a misdemeanor arrest warrant arising out of the January 6 grand jury investigation in DC, just for trespassing. Upon searching Brown’s house and RV, FBI agents saw several firearms and some grenades that cooperating Oath Keeper witness Caleb Berry had told investigators that Brown brought to January 6 in his RV. So the FBI got another warrant the next day to seize the weapons. 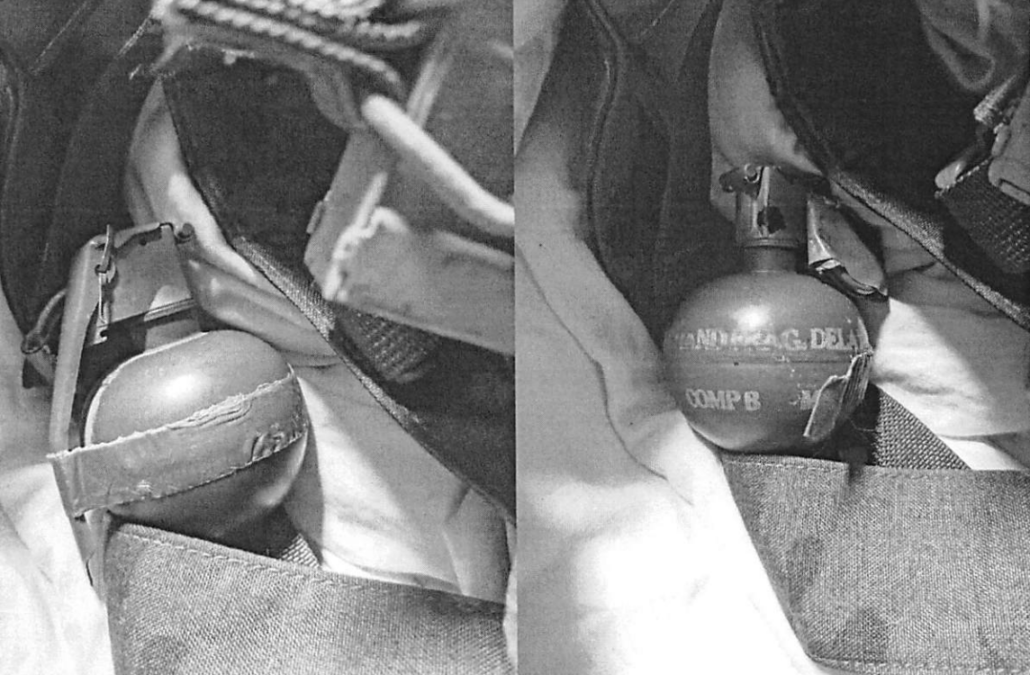 On October 19, DOJ indicted him for the weapons. They found a bunch of documents in a briefcase in that search, though, and after six months, they superseded Brown, adding four counts of 18 USC 793e, the same crime for which that other guy in Florida is being investigated.

It may have taken them six months to determine whether the 18-year old documents from a deployment to Afghanistan were still classified. Or — as explained below — they may have considered but decided not to charge him for a report Brown bragged about while drunk five yers ago. That process of deciding which documents to charge (what Brandon Van Grack revealed recently are called “Goldilocks” documents) takes some time and requires the input of the agencies whose documents would be charged.

That’s part of the discussion going on right now about the documents Trump took home.

Like many Jan6ers, Brown spent much of the last year challenging his detention and searching for increasingly MAGAt lawyers, ultimately settling on representing himself, pro se. Brown challenged the search of his home — but not the seizure of those classified documents. The two sides have also had a fight about how much of the money that Brown grifted by fund-raising off his arrest he or his girlfriend could access, rather than pay off his court appointed lawyer. Brown’s girlfriend also successfully fought to have a rifle belonging to her returned to her.

It’s not just Trump who tries to get their personal stuff back after an invasive search.

The case has only recently turned to the classified information that will be debated at trial. For example, the government is seeking to admit related evidence (called 404(b)), about the time in 2017 when investigators came to his home based on a suspicion he had classified information. They didn’t find the classified document in the place he permitted them to look, but he refused to let him search his whole house.

On October 17, 2017, Special Agents from the Air Force Office of Special Investigations conducted a voluntary interview of the Defendant at his residence, which was the same residence that was searched in this case. The purpose of the interview was to determine whether the Defendant possessed any classified information and, if so, to retrieve the information and return it to the government entity to which it belonged.

At the request of the interviewing agents, the Defendant consented to a search of the storage containers in his shed, which he stated contained all of the items that he had removed from his office upon his retirement from the military in 2012. Agents searched the storage containers, and they did not find any classified information. Agents requested permission to search the remaining residence and other areas on the property. The Defendant refused to consent to the search of anywhere else on the property.

The government wants to introduce evidence of this earlier search as proof he knew he had the classified documents, fulfilling one element of the offense — precisely the same thing DOJ would do with the June 3 meeting if they were ever to charge Trump.

What’s more, the Defendant’s 2017 refusal to consent to a search of his residence for classified information further establishes his consciousness of guilt for the charged crimes, which is relevant to proving that he willfully retained the documents, as required by the statute. See 18 U.S.C. § 793(e) (“Whoever having unauthorized possession of, access to, or control over any document . . . . relating to the national defense . . . willfully retains the same and fails to deliver it to the officer or employee of the United States entitled to receive it . . . [s]hall be fined under this title or imprisoned not more than ten years, or both.”).

This is exactly how the June 3 meeting would function in a Trump prosecution. Before that, he might have been able to claim he didn’t know he had the documents or hadn’t refused to hand them back. After that, it’s far easier to make the case. That’s why it’s virtually impossible to charge Trump for 18 USC 793 for the earlier possession of classified documents.

Brown objects to that evidence coming in because, he says, the documents that he did brag about in 2017 aren’t classified in the form in which they were found in his briefcase, because he wrote them himself.

The 404(b) documents that the Government chose not to charge the Defendant with, probably because in the form they are in, are not classified, were allegedly in the same briefcase as the charged documents. In 2017, the Defendant was discussing documents that he did have in his possession that he himself had marked “SECRET,” that he had authored, and that the Government decided did not warrant criminal charges for him possessing when they found the documents.

That’s probably not true: the documents are probably just harder to prove to be classified and possibly a good deal more sensitive, given that Brown was bragging about them.

Again, this is something we might see with a Trump prosecution: The government might charge less sexy documents that could be shared with a jury, but reference the far more damning ones stored with the charged documents.

The government has also recently turned to how they’ll persuade the jury, which is the ultimate judge, that these documents constitute National Defense Information. Here’s the standard the jury will be asked to consider.

To prove this, the government wants to have a witness attest the documents remain classified.

At trial, the government anticipates calling an expert witness to testify that the Classified Documents were and remain classified, and that, as a result, they were subject to access restrictions, specific handling and storage requirements, and other protections designed to avoid the disclosure of information and material relating to the national security.

They want the witness to explain the documents. While that person testifies, they want to share the documents with the jury under what is called a Silent Witness Rule. They’ll be handed binders — the one time I’ve seen this process, the documents were in the brightly colored classified folders like the ones Trump stole — with the actual documents inside, but then have to return the binders as soon as the witness is done.

First, the government would provide each juror, the Court, and the defense with a binder of unredacted copies of the Classified Documents. The same process was followed in Mallory, 40 F.4th at 173, and it would enable the jurors to examine the Classified Documents while the government elicits unclassified testimony about the same from its expert witness. As in Mallory, the defense would be permitted to follow the same procedures during cross examination and/or with its own cleared expert, should the defense choose to retain one. Id. This procedure ensures that the jury has full access to the information it needs to fulfill its obligations. Id. at 178 (“But a review of the record reveals that the silent witness rule denied the jury none of the information on which Mallory based his defense.” (emphasis in original)). Second, the government will have Bates and line numbers added to the Classified Documents to enable the witness, the government, and the defense to direct the jurors to specific portions of the material.

While that happens, the public will have access only to heavily redacted versions of the documents.

The SWR is fairly controversial. In Jeffrey Sterling’s case (the one time I’ve seen it), it accorded the documents a kind of mystique and also limited the amount of time the jury could spend examining the documents, which weren’t related to the charged offenses in the case.

But (as the government explained) the SWR is one of the few tools the government has to prove to a jury that information is classified so they can hold someone accountable for hoarding such documents after he leaves government.

Brown is just an angry old former Green Beret who has been stewing on his bitterness with all the keepsakes in his RV. He’s not the former President. Though they both seem to spend a lot of time stewing with their treasures.

But the same complexities arise even in his case. And even with Brown, prosecuting someone for hoarding classified documents he brought home from work is not easy.

Update: Added more contextualization of how this would work with Trump.

While in the Special Forces, over the course of eight months from September 2010 to April 2011, the Defendant “knowingly and willfully placed approximately 67 unauthorized files on the [Department of Defense computer system] shared drive.” See Exhibit 1. The military determined that the 67 files that the Defendant had uploaded contained “pornographic photos and videos.”

On September 29, 2011, the Defendant received a General Officer Memorandum of Reprimand (“GOMR”) for these actions, attached hereto as Exhibit 1. The GOMR determined that, but uploading pornography to the military computer systems, the Defendant had “compromised the high standards of personal conduct and exemplary behavior expected of a Senior Noncommissioned Officer and Special Forces.” It further determined that the Defendant’s behavior was “inexcusable and incompatible with the maintenance of high standards of performance, military discipline and readiness,” and had “demonstrated extremely poor judgment, a lack of self-discipline, lack of professionalism and set an extremely poor example for all Soldiers.”

The Defendant was angry about the GOMR, and he later claimed that the GOMR was levied against him in retaliation for the contents of a classified memorandum that he had written. The Defendant finished out his term of enlistment and retired from the Army in 2012.

And it provides more detail on how and where it found the documents.

If you believe the government’s story (though stories of how DOD disposes of guys like Brown are always suspect), he brought these documents home nursing a grievance, certain he was not fired for cause.

It’s another thing he has in common with Trump, I guess.