Yesterday, SDFL AUSA Anthony Lacosta filed a sealed letter to Special Master Raymond Dearie along with the log laying out any disputes between the government and Trump over his potentially privileged documents.

Subsequent to that, Judge Aileen Cannon ordered unsealed the status report that Lacosta and Benjamin Hawk filed back on August 30. I will explain the two kinds of damage Judge Cannon did to Donald Trump in order to create an excuse to intervene in this matter — as I keep saying, Cannon caused the harm she intervened to fix.

For now, I want to talk about what happened with the potentially privileged material. Here’s a table of what we know about those documents.

The warrant to search Trump’s beach resort required a privilege team to search his office. But (as members of that team explained in the hearing on September 1), they instead did the initial search of both the storage room and Trump’s office. As a result, the privilege team segregated 6 sets of information, which were catalogued on what I’ve called the SSA Receipt. The revised detailed inventory describes these boxes this way (note, these descriptions probably exclude the potentially privileged material, which is inventoried separately):

Item 4, which the status report describes as “the entire contents of a single drawer” in Trump’s office.

Three passports were originally in this drawer, which is why they were seized. They were returned on August 15. These documents were appropriately seized under the warrant because there were two classified documents in the drawer.

Items 29 through 33, which were in the Storage Room. 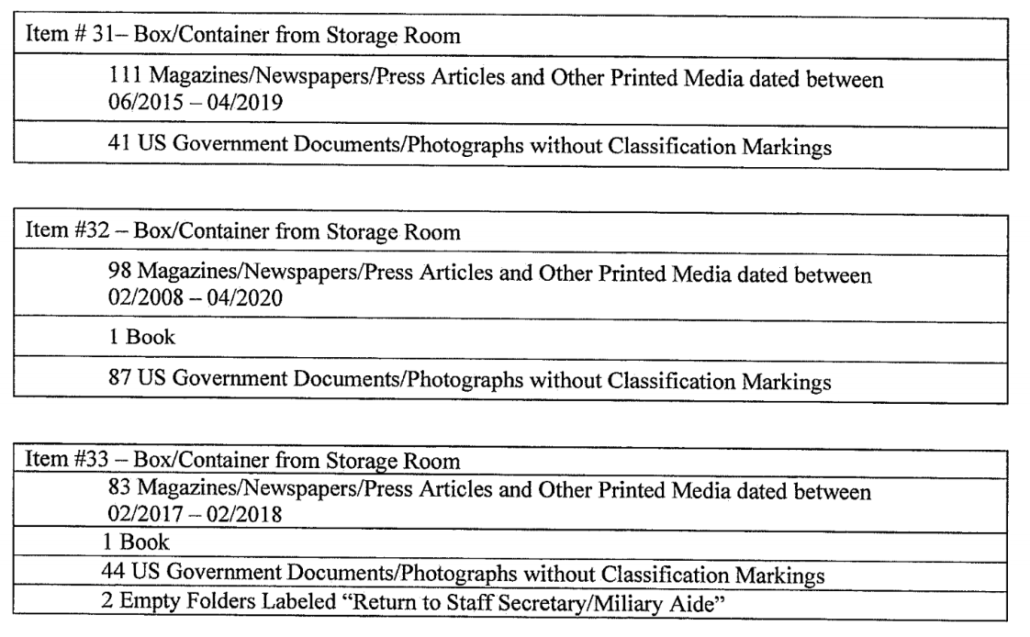 These boxes would have been appropriately seized under the warrant because all were stored in the place where boxes storing classified documents were stored. In fact, Item 29 had a Top Secret document in it and Item 33 has two empty staff secretary folders in it. Additionally, all are described to contain government documents, which were also authorized for seizure.

Two days after the search, on August 10, a Case Agent found a 3-page letter from law firm Morgan Lewis, “comingled with newspapers;” Morgan Lewis’ Sherri Dillon was named in Tish James’ motion to compel Trump’s deposition. So they sent the entire box to the privilege team, as described in the warrant. The box also included 4 pages of government documents treated as potentially privileged, including an email from the Air Force Academy’s coach.

By August 11, the privilege team had segregated out anything that  met their over-inclusive standard for potentially privileged documents from the rest of the documents, then sent the 7 boxes to the investigative team (which is, presumably, what led to the return of the passports days later).

On August 25, a case agent provided one more document to the privilege team:

39-page set of materials that appears to reflect the former President’s calls. (The majority of pages are titled “The President’s Calls” and include the Presidential Seal.) Specifically, the document contains handwritten names, numbers, and notes that primarily appear to be messages, as well as several pages of miscellaneous notes.

One of these messages was from “Rudy,” though did not appear to constitute legal advice.

The privilege team separated all these potentially privileged documents into two categories:

This category includes 21 sets of documents for a total of 138 pages. Most are, “primarily government records, public documents, and communications from third parties,” which could not qualify as privilege. One document is a 3-page email to a White House email account, which the government maintains constitutes a waiver to attorney-client privilege. As noted, another is a printed email from the Air Force Academy’s head baseball coach with the word “PatC” on it.

For example, the Privilege Review Team agents identified and segregated a printed email exchange between the U.S. Air Force Academy’s head baseball coach and the White House because “PatC” (perhaps a reference to White House Counsel Pat Cipollone) was written on the document in black marker (Item Number 4 in Exhibit A at FILTER A-005).

Another, as noted above, is one of the phone messages from the President’s Calls (we know this is a phone message because both are described as Item 21 in Category A), from “Rudy” and appearing to be a topic unrelated to legal advice.

This category consists of 43 sets of documents, for a total of 382 pages. The status report describes those as,

legal in nature (e.g., settlement, non-disclosure, and retainer agreements) or otherwise potentially sensitive, and they do not appear to be themselves government or Presidential Records or classified documents.

According to the privilege team, just one of those documents appeared to be privileged. But way back on August 30, they proposed to give the originals of all these documents back to Trump. Then they tried again on September 1. Trump had to wait two more weeks before receiving these documents, so that Judge Cannon could use them as her basis for intervening in the case.

According to Trump’s objections, on September 26, the government provided an email newly identified by case agents (presumably in the course of reviewing the inventory). The government maintains the email is not privileged but Jim Trusty claims it is.

On Monday, September 26, counsel for the Privilege Review Team provided Plaintiff’s counsel with another example of filter failure. The email in question was identified by the “FBI case team,” and returned to the Privilege Review Team, which is characterizing the communication as non-privileged. Plaintiff believes the email falls squarely into the category of attorney-client privileged.

In addition to the document sorting, before the filter team shared any photographs documenting the search, both the filter agents and the filter attorneys reviewed the photographs to ensure no privileged documents were captured in the photo.

Update: Added explanation for Morgan Lewis letter, h/t Simon. Added observation that there may be only a single privileged page in the whole seizure. Corrected numerical error.