The Additional Complexities of the Proud Boy Sedition Case 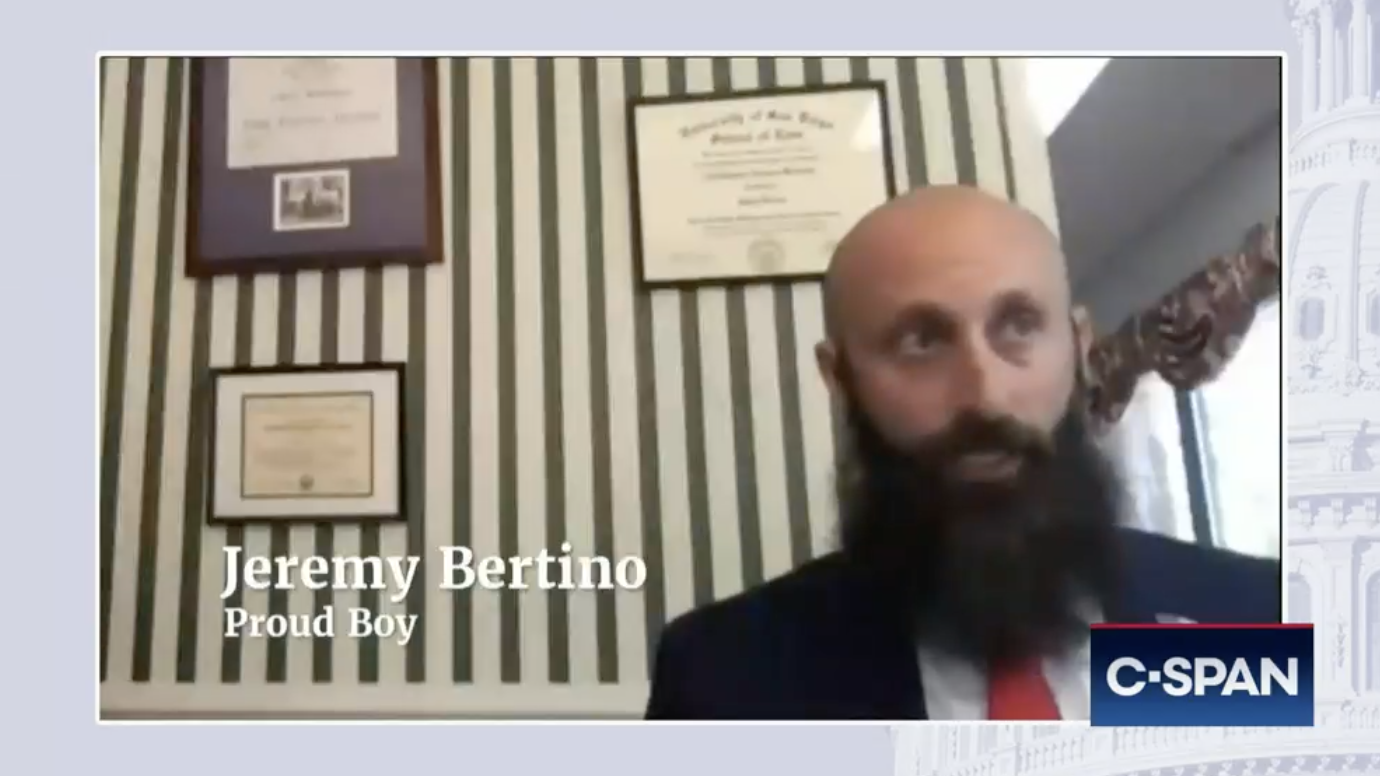 Some weeks ago, someone involved in the Proud Boy case emailed me a personal invitation to the Proud Boy leader trial later this year: “please accept my invitation to come report on the proceedings in person.  In my opinion, it will prove far more interesting than the OK trial.” It had been a long time since I had heard from this person — since I warned him, for a second time, I would not treat his emails to me as presumptively off the record, because by then the frequency of them and the conflicts between what he said about the First Amendment publicly and what he said to me on emails had become newsworthy in and of itself.

I have no intention of traveling to DC for the Proud Boy trial. Like the Oath Keeper one, there will be scores of journalists who are very familiar with the case who will do great live coverage. I would add little, if anything.

Remember, several Proud Boys, including Tarrio, worked with Roger Stone to threaten Amy Berman Jackson and Bill Barr’s DOJ treated it as a mere legal technicality. The Proud Boys got sanction, as a mob, from the President’s own mouth, which had ripple effects throughout government on the way they were treated.

So I wanted to look at three indications of the difficulties the Proud Boy prosecution may face that the Oath Keeper prosecutors did not.

First, in a hearing yesterday in the case against five men who were co-travellers with Joe Biggs the day of the attack, prosecutor Nadia Moore mentioned that she had just provided the “scoped” phones from (I think) Paul Rae and Eddie George — “scoped” is what they call it when the FBI pulls out the things that are responsive to a warrant. That’s a fairly shocking delay in exploiting their phones. Rae was arrested on March 24, 2021 and George was arrested on July 15, 2021. But it’s true that a May discovery index from the Proud Boy leader case only shows a scoped LG Tablet from George, with no scoped phone listed for either (though there is a phone video from Rae listed).

It may well be that — like Enrique Tarrio — they had really complex passwords on their phone. It took over a year to exploit the content of his phone, even though it was seized before January 6. There appear to be others, too, whose phones were not yet exploited in May.

Aside from a delay in the scoping of Stewart Rhodes’ phone due to the volume of encrypted texts on it and a privilege review holding up the exploitation of Kellye SoRelle’s phone, there were no known similar delays on the Oath Keeper side.

While the Oath Keepers, like the Proud Boys, intentionally recruit law enforcement, the Proud Boys have been better at co-opting cops. Around five of the charged Proud Boys were former or still cops when charged. Tarrio had been a formal informant during a prior criminal prosecution. And several other members of the Proud Boys, including Joe Biggs, provided information to the FBI about what they claimed were Antifa.

Biggs described his own relationship with the FBI this way:

By late 2018, Biggs also started to get “cautionary” phone calls from FBI agents located in Jacksonville and Daytona Beach inquiring about what Biggs meant by something politically or culturally provocative he had said on the air or on social media concerning a national issue, political parties, the Proud Boys, Antifa or other groups. Biggs regularly satisfied FBI personnel with his answers. He also stayed in touch with a number of FBI agents in and out of Florida. In late July 2020, an FBI Special Agent out of the Daytona Beach area telephoned Biggs and asked Biggs to meet with him and another FBI agent at a local restaurant. Biggs agreed. Biggs learned after he travelled to the restaurant that the purpose of the meeting was to determine if Biggs could share information about Antifa networks operating in Florida and elsewhere. They wanted to know what Biggs was “seeing on the ground.” Biggs did have information about Antifa in Florida and Antifa networks in other parts of the United States. He agreed to share the information. The three met for approximately two hours. After the meeting, Biggs stayed in touch with the agent who had called him originally to set up the meeting. He answered follow-up questions in a series of several phone calls over the next few weeks. They spoke often.

This is the same office where an FBI Agent, in August, refused to participate in the arrest of militia-associated men who planned to bring weapons to January 6. The agent then ran to Chuck Grassley and Ron Johnson, bitching, after his clearance was suspended because he didn’t like the way FBI was running domestic terrorism investigations.

The single FBI informant known to have been present on January 6 appears not to have told his handlers about a meeting he was at the night before where using violence was discussed. And so DOJ has given two members of the Kansas City Proud Boy cell who were with him — Ryan Ashlock and Louis Colon — unbelievably sweet plea deals, I suspect to sustain the rest of the cases against the Proud Boys.

Both Tarrio and Biggs have made specific requests for their own communications with law enforcement — in Tarrio’s case, he claims it is Brady material. That is, they plan to argue they couldn’t be guilty of plotting against the government because they’ve been so chummy with often right wing authoritarian cops in the past.

The Proud Boys have also been very good at pressuring witnesses not to testify against the mob. It had seemed that Ryan Samsel might enter into a plea deal describing what transpired between him and Biggs right before he kicked off the entire riot, for example, until Samsel was assaulted in still unexplained circumstances at the DC jail. Zach Rehl seemed like he was considering a plea deal until Tarrio called Rehl’s wife about it.

Jeff Finley, who was a co-traveller of Rehl’s, seems like he cooperated his way into a misdemeanor plea deal (like Brandon Straka is known to have), but in a July request for a four-month continuance, the government seemed to suggest they weren’t sure how complicit Finley was.

The government requests this continuance to allow time for the parties to fully evaluate the nature and seriousness of the defendant’s misconduct and for the parties to prepare a full and complete allocution to assist this Court in its sentencing.

All this is background to the Jeremy Bertino plea rolled out yesterday. Bertino was a high level Proud Boy who, because he was injured in a December 12 brawl, was not present on January 6, but was closely involved in discussions in advance of it.

Bertino’s possible arrest has been anticipated for months. A misdemeanor docket for Bertino was briefly unsealed on September 15 but then sealed. Yesterday, he pled guilty to one count of seditious conspiracy and one count of unlawful weapons possession for a small arsenal he had in spite of a past felony conviction. He is, as everyone (including me) has reported, the first Proud Boy to plead to seditious conspiracy. And he’s another participant in key leadership discussions in advance of the attack.

His statement of offense, however, leads me to wonder whether he didn’t get this plea deal in part to keep Charles Donohoe — who like Bertino is from North Carolina, and who pled guilty to obstruction and assault in April — from backsliding as a cooperator.

Most of the new details the SOO provides focus on 2020, describing how the Proud Boys radicalized in late 2020 and emphasizing the import of the December 12, 2020 confrontations, including explicit discussions about using Tarrio’s anticipated arrest to rile people up against the cops. The description of changing attitudes about the cops (something that has featured in Proud Boy indictments from the start) may serve to combat Tarrio and Biggs’ efforts to claim chumminess with the cops.

Bertino further understood that due to a number of negative interactions with law enforcement, including the events of December 12, the Proud Boys increasingly viewed police as the enemy and Proud Boy members increasingly referred to the police as “coptifa,” meaning that they viewed the police as siding with Antifa.

The SOO explains that Bertino did not know what plan Biggs and Nordean came up with at a still unexplained meeting around 9PM on January 5. A very similar paragraph appears in Donohoe’s statement of offense.

What I’m most surprised about is who it includes and who it excludes: The SOO names Donohoe at least twelve times — sworn statements implicating Donohoe in events, many of which he himself admitted to in his own SOO. That shouldn’t be necessary for a cooperating witness (though because they were both in the Carolinas, the two men would have worked closely together). While it mentions Person-3, whom Alan Feuer has identified as John Stewart, it does not name Aaron Wolkind at all, referred to frequently in earlier Proud Boy materials as Person-2. With the exception of Person-3 (who is not yet charged), the focus is entirely on those already charged in the leaders conspiracy, not any other Proud Boys.

It is undoubtedly an important step to get a plea to sedition from someone who wasn’t even present the day of the attack. But that doesn’t alleviate the many things that make this case more complex than the Oath Keeper one.