[This is a guest post by our long time Roving Reporter, Rosalind] 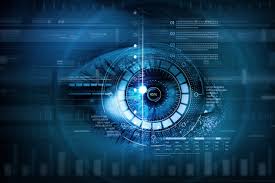 It may have been the moment I found a private drone filming me at night through an upstairs window.

Or the medical receptionist’s surprise when I wouldn’t sign in on the touch pad until she showed me a copy of what I was agreeing to, saying I was the first to ever ask for this.

Or at the end of a recent physical therapy session, after an hour divulging the most private and confidential health information, when I bent down to put on my shoes and discovered an Amazon Alexa blinking back at me.

Doorbell Surveillance Cameras and Microphones. License plate readers. Delivery robots. Security robots. Dashboard cams. Bike helmet cams. All recording our every move. Our personal privacy is being striped-mined, data-mined and packaged up for corporate profit, and we the people are assisting all the way.

I am not a technophobe. I AM someone who has the perhaps radical idea that before any device that permanently collects our biometric info is put out in the world, the company must first provide verifiable proof that their widget actually does what it claims, and fills a true societal need.

As the Amazon/Apple/Google panopticon leads the way in creating ever more horrific ways of monetizing our individual selves, we must collectively hit pause and consider the ramifications. The technology feeding our Brave New AI (Artificial Intelligence) Algorithmic World isn’t being built by benign super geniuses. Ignore the number of supposedly astute folk who wax orgasmic over the possibilities of AI as if it’s untouched by human hands. Newsflash: (Charlton Heston voice) AI – is – people! More specifically, a self-selected narrow slice of the human spectrum. Flawed humans propagating and programming their every bias and prejudice into their final products that are then put on the market to travel the world.

The hottest area in surveillance is emotional recognition, companies claiming their products are able to discern our very thoughts. Smiling = happy! Frowning = Sad! Congrats, Silicon Valley, for finding a way to monetize Resting Bitch Face! It would be funny if it wasn’t so fucking scary. Forget the idea that each internal brain, processing the world in its own unique way, could ever be decoded by the exterior. Full stop at the idea that private corporations are claiming rights to our private thoughts, as they insert this fatally flawed algorithm into programs currently denying you a job, a mortgage or health care.

We gotta hit the brakes. The first way is to understand what you’re agreeing to when you bring new tech into your life and home. The tiny font, multi-page “Terms of Service” and “Privacy Notice” are designed for you to give up and auto-smash the “accept” button. The three things to remember are “The Corporation” may collect and keep forever anything it wants, any agreement you signed is null and void upon sale of “The Corporation” to another, and your personal info becomes the property of the new “Corporation”. And “Personal Information” includes: facial recognition, iris scan, voiceprint, fingerprint, palm print, body type, gait, emotional state, DNA, health conditions, and on.

It’s time to re-discover the power of “no”. We have the ability and the right to challenge privacy violations. Corporations count on, and invest millions seeding one-sided stories, for us to simply accede to ever more invasive tech without a fight. After discovering the Amazon Alexa with its multiple omni-directional microphones blinking back at me in my physical therapy office, I went home and composed a polite but pointed email to the owner. She replied a few hours later thanking me. She hadn’t considered the ramifications of these devices, and had removed them from the rooms.

Beyond the personal invasion of privacy inflicted by our growing Surveillance Nation, is the very real damage it’s doing to the fabric of our Nation. The chief driver in my opinion is the Amazon Doorbell Ring Camera & Microphone. First Amazon turned us into package addicts, promising faster and quicker fixes. Then when the inevitable occasional package theft occurred, flooded the zone with cameras and mics and smartphone notifications amping up fear beyond the facts. Then the sharing – often in realtime – of the footage with Facebook or Next Door or the Local Police and the weaponization of the nosey neighbor began.

Most articles about the Ring set it in a single family home suburban setting, with footage capturing the street and the homes across. They never consider the Ring in an apartment or condo setting where doors face one another from just a few feet away, where a neighbor you have never met may film and record your every move. This is my reality, but thankfully no neighbor on my floor has yet installed one, but they are spreading throughout the complex and every conversation with neighbors is “ZOMG, Crime!!”. Impervious to the facts that our local crime rate has stayed stable, and no package has been stolen for years, their solution to any perceived problem is lights, cameras and microphones – so they “feel” safer.

Instead of safer, a nation of paranoid voyeurs is creating life-threatening situations for innocents caught up in their cameras, calling the police out for anyone they deem suspicious – i.e. a white person seeing a person of color in “their” neighborhood (hey, Amazon was able to create a tech that DOES recognize darker skin!). This week saw the idiotic example of a neighbor helpfully returning a mis-delivered package, placing it on the recipient’s porch, when Father and Son inside got the doorbell camera alert and rushed out – armed – to bag the thief messing with their package. No one in sight, they ran into the parking lot where they saw a woman sitting in her car. Aha! Blam! Blam! Blamblamblam! Thankfully the woman, a different person than the helpful package returner, was unharmed.

My personal breaking point occurred when I experienced a medical situation that required my calling 911 (all good – a minor issue producing dramatic blood). As I stood at my front door awaiting the paramedics, staunching the blood flow, I stared at my neighbor’s door staring back, realizing if I lived a floor below every moment of my terror would’ve been captured up close and forever, potentially broadcast live to the world. My Amazon datafile would be updated to include “this is what Rosalind looks like undergoing a medical emergency” and the Bezos Borg’s definition of who “Rosalind” is duly repackaged for redistribution.

For a neighbor on another floor who chose to die at home under hospice care, her final exit in a body bag on a stretcher was captured by four cameras and mics, her file updated to “this is what the neighbor in 4B looks like when she is dead”. Her mortal self ceased, her captured biometric self doomed to life eternal.

Before any device that permanently collects our biometric info is put out in the world, the company shall first provide verifiable proof that their widget actually does what it claims, and fills a true societal need. Then We the People have a choice to make. Please choose wisely.

DOJ Rethinks — but in a Few Areas, Expands — Access to Media Co... Power And Rationality