Vote NO on ‘Flaw and Disorder’ Republican Attorneys General 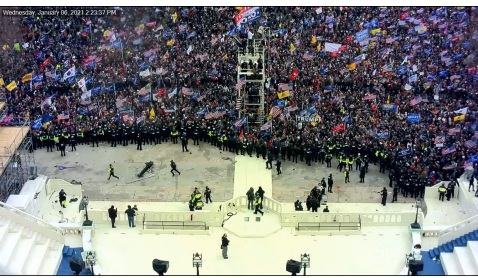 Critical to the massing of insurrectionist rioters on January 6 is a group of elected Republicans, several of which are running for re-election.

Unfortunately, the media has forgotten their role and lost sight of them even though they’ve had a good news peg to use for investigation and reporting.

That group is the Republican Attorneys General Association (RAGA), which funded and produced a robocall to encourage insurrectionists to attend and participate in the attack on the U.S. Capitol building.

Not on this list of current RAGA members is Chris Carr, an incumbent running for re-election in Georgia.

Carr resigned from RAGA five days after the attack on the Capitol.

Note that some of these RAGA members are seeking higher office.

Some of them were much more active in the January 6 conspiracy, like Ken Paxton who sued the states of Georgia, Michigan, Wisconsin, and Pennsylvania over the 2020 election results and spoke at the January 6 rally in Washington DC before the assault on the Capitol.

Paxton also has avoided accountability to his state for securities fraud charges; he was indicted in 2015 and has yet to stand trial. He’s pulled hijinks to avoid being served a subpoena related to a lawsuit by an abortion rights fund. He’s avoiding his responsibilities to the state of Texas.

Paxton has also refused to condemn the insurrectionists or the attack on the Capitol.

None of these RAGA incumbents should be re-elected because they supported the conspiracy to obstruct government proceedings on January 6, 2021. None of them made a public mea culpa about their role as financial supporters.

The RAGA members seeking higher office should be denied their quest; they have refused to support democracy though they swore oaths to do so.

Every RAGA member needs to answer for their contribution to January 6. The media needs to do a better job to this end. None of these folks should feel comfortable attempting to run for top law enforcement official in their state which is an indication media hasn’t done an effective job uncovering RAGA’s culpability on January 6.

Furthermore, corporations which donated to RAGA, suspended their donations, and then donated again to RAGA should be scrutinized.

(* There is no Democratic Party candidate running for this open seat. This is unacceptable.)

Trash Talk: It’s All Over But The Screaming Judge Raymond Dearie Prepares to Consult with the Archives