Spy Versus Spy Amid the Proud Boys, Again 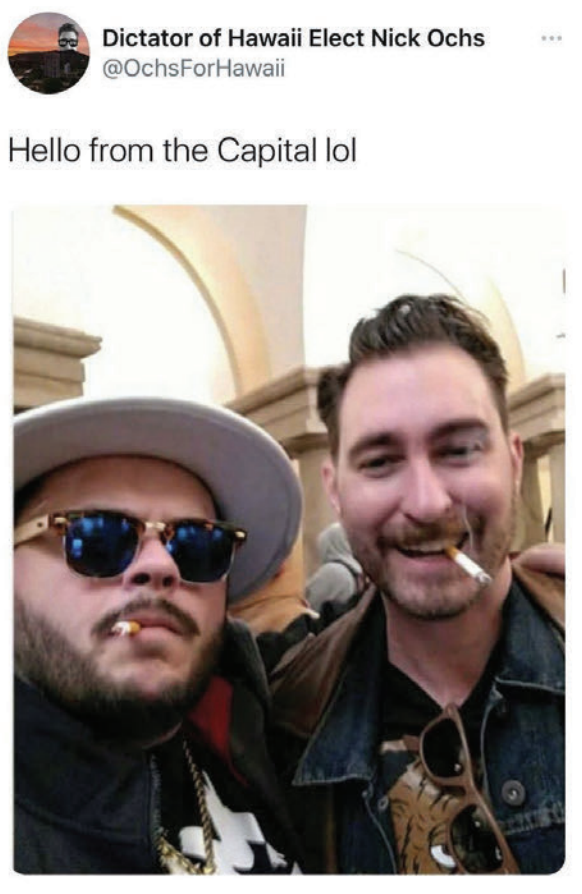 In the plea hearing for Nicholas Ochs and DeCarlo, Chief Judge Beryl Howell asked prosecutor Alexis Loeb whether the defendants had sat for the interview required by the standard plea deals. Loeb explained that, Ochs had but, for reasons pertaining to the ongoing investigation, FBI did not do such an interview with DeCarlo. I wondered, then, whether DOJ wanted to avoid discovery obligations to other Proud Boy defendants.

It’s something I had in mind as I read the various filings (Zach Rehl, Ethan Nordean, Enrique Tarrio, Joe Biggs, Nordean reply) that — NYT reported the other day — pertain to discovery about informants that the FBI had or developed among the Proud Boys. The gist of the complaints (as noted in the Biggs filing), which treat this as a Brady violation that merits dismissing the case, is that the FBI had records relating to Proud Boys who said they did not know of a plan to attack the Capitol in advance.

Biggs notes here on the open record that the Brady violations the parties continue to dispute — beginning with the dispute triggered by the Government’s late disclosure of a significant cache of Brady materials on August 13, 2021, or fifteen months ago — consistently go to a structural feature in all three of the Department of Justice’s superseding indictments in 21-cr-175. That feature and overarching issue is whether a Proud Boy conspiracy plan to obstruct the Biden-Harris vote certification or to commit sedition ever existed or could have existed. The Brady materials and discussions most at play now and since mid-2021 point up the increasing doubtfulness and high unlikelihood of the existence of a conspiracy. That is troublesome, and glaring. It continues to be the ‘elephant in the room’ of 21-cr-175.

It’s hard to know how seriously to take this. Some of these defense attorneys have been crying wolf from the start, claiming something turned over in timely fashion is exculpatory when it in fact shows really damning information.

In the August instance cited by Biggs, which NYT also wrote about, the informant was low-level and claimed to have shown up to insurrection late. Except Statements of Offense from members of the Kansas City suggest that the informant falsely told the FBI that violence had not come up in a meeting the night before the attack.

In the evening on January 5, 2021, defendant attended a meeting with co-defendants William Chrestman, Kuehne, and Ashlock, and others during which group safety was discussed. At some point during the meeting, another individual said that he did not come to Washington, D.C., to just march around and asked, “do we have patriots here willing to take it by force?” Defendant was shocked by this and understood that the individual was referring to using force against the government. Co-defendant Kuehne responded to the question by saying that he had his guns with him and, in essence, that he was ready to go. The individual who posed the question said that they should “go in there and take over.” [my emphasis]

In the case of the two Nicks, they definitely coordinated with each other and premeditated a plan to stop the vote certification. But they appear not to have been part of any larger plan (they even attended Trump’s rally, which most Proud Boys did not). In other words, one thing that may be going on is that Biggs and Nordean implemented a plan developed along with Tarrio and some senior Proud Boys who weren’t in DC (such as the cooperating Jeremy Bertino), but didn’t tell the greater number of Proud Boys what that plan is in advance, something that makes the testimony of others appear exculpatory only because the Proud Boy leaders had kept a close hold on their plans.

According to Nordean’s reply to DOJ’s entirely sealed 21-page response, the government believes it was justified in withholding the documents under Rule 16(a)(2), which only requires sharing the documents if the pertinent witnesses testify.

The government argues that the sensitive materials were exempt from its discovery obligations under Rule 16(a)(2). ECF No. 538, p. 11. That is false because (1) the records at issue were not made by a government agent or attorney for the government in connection with investigating or prosecuting “the case,” i.e., United States v. Nordean, 21-cr-175, and (2) it is not just “internal government documents” Nordean seeks but the underlying information merely reproduced in government documents.

Nordean seems to be playing games about the bounds of “this” investigation here, and if the documents genuinely are not exculpatory, that would probably be a reasonable response. It’s a matter of whether this is an investigation into just the Proud Boy leaders, all the Proud Boys, or everyone involved in attacking the Capitol.

Separately, these are the files that (in a recent hearing), the defense attorneys were complaining about the heightened security procedures to access the documents, as Nordean lays out in his original filing.

[T]he government has made the extraordinary argument that these exculpatory materials cannot be produced directly to defense counsel. It has argued, successfully, that counsel must comply with the following procedure in order to access Brady information in this case:

(1) counsel must travel to an FBI office to review the materials in person;

(2) counsel may not receive copies of the materials but must take handwritten notes;

(3) counsel must then move the Court to produce the materials to the defendants, based on summary descriptions of the materials in their handwritten notes; and

(4) counsel must then file additional motions to secure this evidence for trial.

The complaint would be more convincing if the details of the earlier informant had not been published by the NYT, making it easy for investigators (and presumably all the other Proud Boys) to identify the informant. In the Oath Keeper case, too, the government is trying to hunt down which attorney(s), if any, sourced a NYT story about an Oath Keeper informant. (h/t Kyle Cheney)

Meanwhile, all this question about who is informing on whom leads me to return to the question of what happened to

Whallon Wolkind in all this (he’s the one top Proud Boy leader not known to have been charged or flipped), not to mention why Dominic Pezzola, alone among the remaining defendants in this case, didn’t join the challenge to access the informant files.

The usual suspects are wailing about how long this investigation is taking. Meanwhile, cases like this reveal the complexity of trying to prosecute key defendants while processing through a thousand others.