This could be hyperbole but it’s difficult to imagine a social media platform the size of Twitter surviving nearly 90% loss of employees across the organization inside a three-week time frame.

I certainly wouldn’t bet any of my money on it.

Thursday was the deadline Twitter’s owner Elon Musk set for remaining Twitter employees to commit to being “hardcore” for Elmo.

They were supposed to have clicked/not clicked by 5:00 p.m. to take an offer of termination with severance.

Many are choosing to walk away, their goodbyes recorded in this ongoing thread (link active at time of posting but no guarantees how long it will stay up): 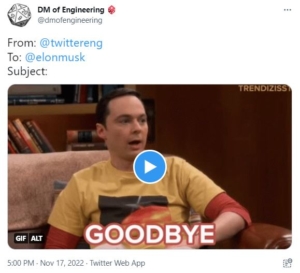 Kylie Robison for Fortune Magazine reported in a Twitter thread that as much as 88% of the staff Twitter had when Musk took over on October 27 has either been fired or opted to leave.

There were employees on vacation, on medical leave, and under H1-B visa who have questions which haven’t been answered; they will not have been able to make a fair election of hardcore for Elmo or nope, thanks.

The number of employees which may fall under this category could be about 1000.

At one point it was said Musk was negotiating with a handful of key engineers critical to keeping Twitter running.

Zoe Schiffer at Platformer reported at 6:52 p.m. ET badge access had been suspended and the Twitter office buildings closed. 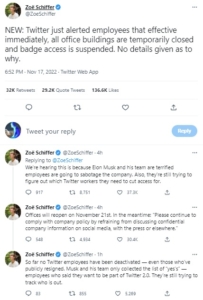 Her tweets leave open the possibility some of the employees who opted to leave may yet be asked to remain.

I wouldn’t hold my breath after reading BusinessInsider’s Kali Hays. 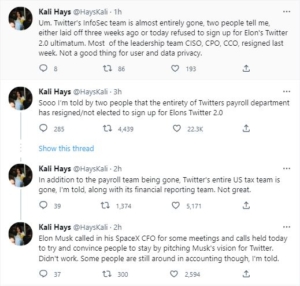 How does a company operate without payroll?

If Twitter has virtually no information security personnel, likely has no documented plan in place for dealing with this scenario, let alone failures all along the way for handling roll out of the Twitter Blue verification system which was a mess of violations all on its own, Twitter could be hammered hard by the Federal Trade Commission for failing to meet the terms of the 2011 consent agreement.

I don’t think it’d be unreasonable to say FTC has grounds to shut Twitter down right now if no users’ or advertisers’ data is secure; the FTC has shut down businesses before. Taking any money from advertisers at this point let alone users for Twitter verification or Twitter Blue would shortchange them if they expected data security. 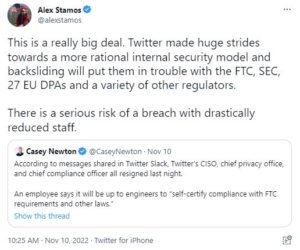 As Alex Stamos, Facebook’s former CISO notes in this Twitter thread, it’s not just the FTC with whom Musk and Twitter will be in trouble. Twitter’s former outside counsel Riana Pfefferkorn agrees there are big problems and has more to add.

And Elmo’s response to all of this is shitposting. 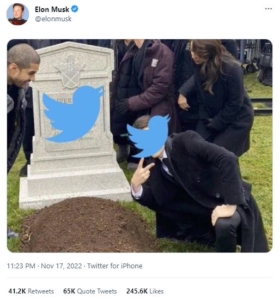 Not even his own shitposting; he stole the meme from another user.

With total staffing and capabilities up in the air, will Twitter survive into the World Cup which begins on this coming Sunday November 20?

I won’t even put money on that.

Marcy wrote recently about Elmo’s forced marriage. Looking at the timeline of events leading up to the closing of the Twitter acquisition, there was certainly something iffy in the way Elmo avoided a background check and due diligence when offered a seat on the board of directors in April, and in the way he hustled out of Delaware’s Chancery Court in October where discovery might have revealed all that wasn’t back in April.

@capitolhunters found some embarrassing information about Elmo which might explain his skittishness. It’s public record but unless one is determined to find it, it won’t surface readily. 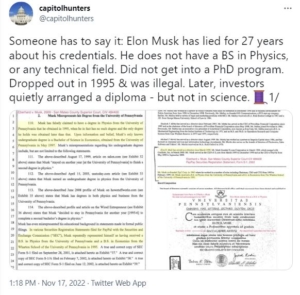 Read the entire thread at the Internet Archive; I wouldn’t count on it being available at Twitter. It may have been shadow banned at one point earlier Thursday evening as I couldn’t pull it up.

Is it possible the lack of qualifications and credentials as well as his former status as an illegal immigrant are the reasons why Musk appeared to avoid a background check and due diligence?

Is this a compelling reason he should not have been able to purchase Twitter to begin with — because he could be compromised because of repeated misrepresentations about his background?

If you’re a regular Twitter user, you may wish to see something constructive done and soon. There are entire communities of people who can’t just switch to another platform because they’ve had small businesses built up around their Twitter presence. There are minority groups who have difficulty switching to different platforms; without Twitter they lose contact with others in their minority community.

One only need look at the mass shooting at University of Virginia last weekend and the confusion about verification on Twitter to realize how serious the loss of Twitter’s integrity as a utility is to much of the U.S. — and it’s not just the U.S.

I recommend checking @Celeste_pewter’s Twitter thread for action items including calling your senator.

(There’s a copy of her thread at the Internet Archive just in case the original one at Twitter becomes unavailable.)

— Oil producing countries Saudi Arabia, Qatar, and UAE financed a considerable portion of Musk’s purchase of Twitter, with Prince al Waleed being the second largest investor. Did they do it for an investment, for access to a media space to promote their agenda, or because they saw a way to screw with one of the most popular electric car manufacturers by giving its compromised CEO the means to fuck himself?

— Text messages produced as part of discovery in Twitter’s lawsuit against Musk included messages between Musk and his ex-wife Talulah (Jane) Riley in which she begged him to buy Twitter and delete it because Twitter had banned conservative satire site Babylon Bee. Riley had discussed the banning with her close friend Raiyah Bint Al-Hussein, wife of British journalist Ned Donovan, and half-sister to King Abdullah II of Jordan. Why would a British actress like Riley be so upset about an American conservative website’s banning by a U.S. social media platform?