Several Missing Details about the Classified Documents at Penn Biden 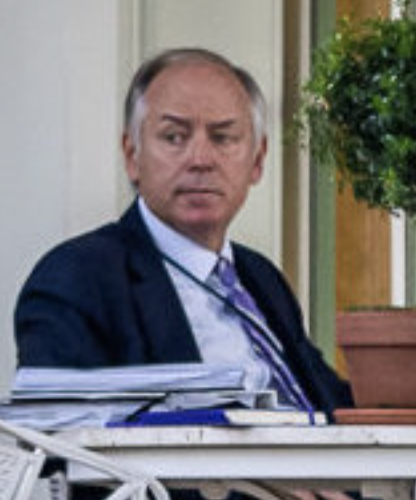 As CBS first broke the story yesterday, on November 2, some Biden associates discovered around ten classified documents (including some classified TS/SCI) in files from his former offices at Penn Biden. The documents were returned the next day, NARA made a referral to the FBI, and Merrick Garland asked one of two remaining Trump US Attorney appointees to investigate the matter.

Attorney General Merrick Garland has assigned the U.S. attorney in Chicago to review classified documents found at the Penn Biden Center for Diplomacy and Global Engagement in Washington, two sources with knowledge of the inquiry told CBS News. The roughly 10 documents are from President Biden’s vice-presidential office at the center, the sources said. CBS News has learned the FBI is also involved in the U.S. attorney’s inquiry.

Garland assigned U.S. Attorney for the Northern District of Illinois John Lausch to find out how the classified material ended up at the Penn Biden Center. The review is considered a preliminary step, and the attorney general will determine whether further investigation is necessary, including potentially appointing a special counsel.

Lausch was nominated to be U.S. attorney by former President Donald Trump, and he is one of only two current Trump-era U.S. attorneys still serving. The other is Delaware U.S. Attorney David Weiss, who is leading an investigation into the president’s son, Hunter Biden.

Lausch recently briefed the attorney general and will eventually submit a final report to Garland. The review is expected to conclude soon.

The report has generated a lot of insanely bad reporting, including this article from the NYT — with four reporters bylined and two more contributing — that doesn’t even mention a key detail from a recent Alan Feuer scoop (which I wrote about here): that Beryl Howell might yet hold Trump or his lawyers in contempt for failing to return all the classified documents in his possession.

Peter Baker and his colleagues didn’t mention that recent NYT scoop, but it did see fit to quote the former President without fact check. Nor did they note that Biden is not complaining that this is under investigation, whereas Trump has never shut up about it. Indeed, a key part of Trump’s defense has been that NARA had no authority to refer the matter for investigation. So Trump’s embrace of this investigation eliminates a claim he has been relying on in his own defense.

Another amusing difference is that for the entirety of the Trump Administration, Biden continued to have clearance; Biden decided not to continue intelligence briefings for Trump shortly after he launched a coup attempt.

Some outlets, including the NYT, have managed to explain that unlike Trump, the Biden office did not refuse to give documents back — though many, like the NYT, have insane comments about why Biden and DOJ didn’t disclose an ongoing investigation when (among other things) that would violate DOJ policy.

The White House statement said that it “is cooperating” with the department but did not explain why Mr. Biden’s team waited more than two months to announce the discovery of the documents, which came a week before the midterm congressional elections when the news would have been an explosive last-minute development.

Still, whatever the legal questions, as a matter of political reality, the discovery will make the perception of the Justice Department potentially charging Mr. Trump over his handling of the documents more challenging. As a special counsel, Mr. Smith is handling that investigation, along with one into Mr. Trump’s efforts to overturn the 2020 election results and the Jan. 6 attack on Congress, under Mr. Garland’s supervision.

“The circumstances of Biden’s possession of classified documents appear different than Trump’s, but Merrick Garland must appoint a special counsel to investigate,” said John P. Fishwick Jr., who served as U.S. attorney for the Western District of Virginia from 2015 to 2017. “Merrick Garland waited too long to let us know he had opened this investigation,” he added. “To keep the confidence of the country, you need to be transparent and timely.”

But there’s something else missing from the coverage so far: it’s not even clear that the documents had been in Biden’s possession, as opposed to another of his former staffers at the Obama White House. As CBS noted, Tony Blinken was the Managing Director at the start, followed by Steve Richetti.

While Blinken had already returned to the private sector by 2017, Richetti was Biden’s Chief of Staff when they left.

One thing Chicago US Attorney John Lausch has been investigating is how the documents ended up at Penn Biden.

Lau[s]ch’s review will examine, in part, how the documents got from Mr. Biden’s vice-presidential office to the Penn Biden Center.

In other words, it might not even be a Biden thing. It could be one of his staffers — and it could be a more serious issue if someone was found to have intentionally taken documents with them when they left the White House, or was using them in the interim. It could be Richetti who did it, for example (which would be one reason among many not to reveal the investigation publicly before discovering how the documents got where they were).

There will be insane reporting ahead — there already has been.

And virtually none of it will report that Trump is still suspected of hoarding classified documents.

Update: Here’s what Jim Trusty argued on August 30, before Judge Aileen Cannon, about how NARA should not be able to criminally refer the discovery of classified documents in the possession of someone covered by the Presidential Records Act because it is not judicially enforceable. 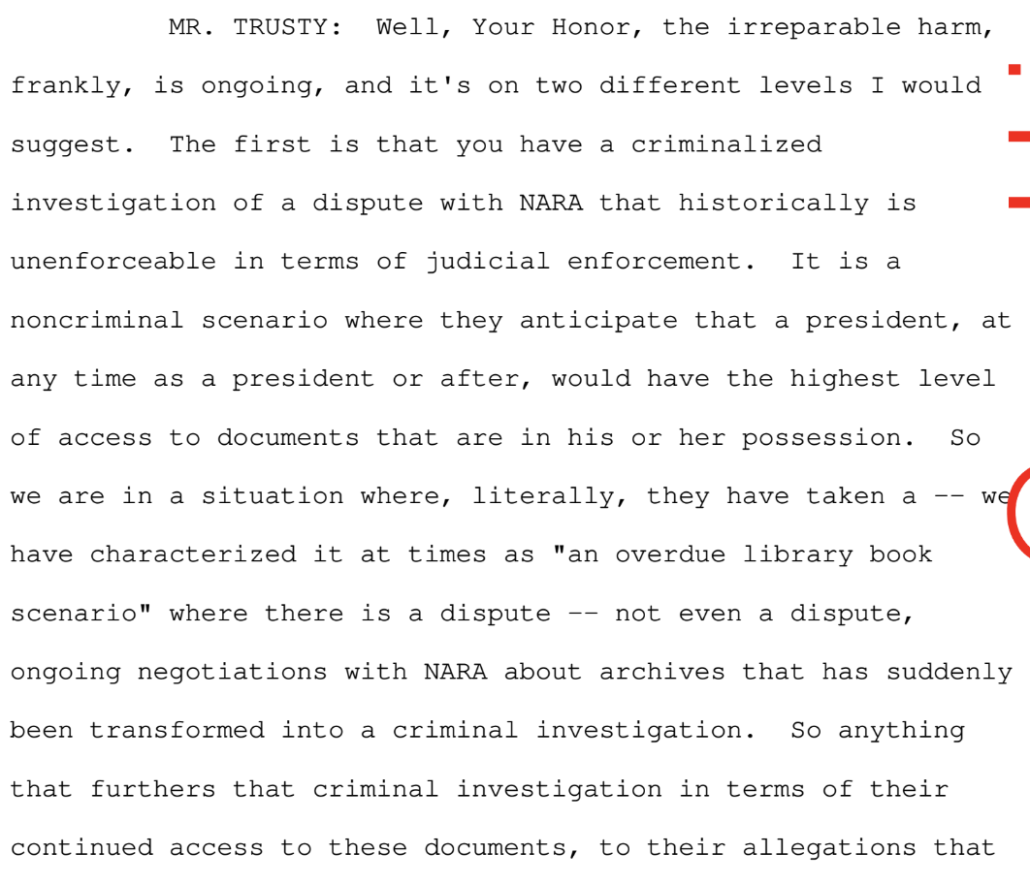 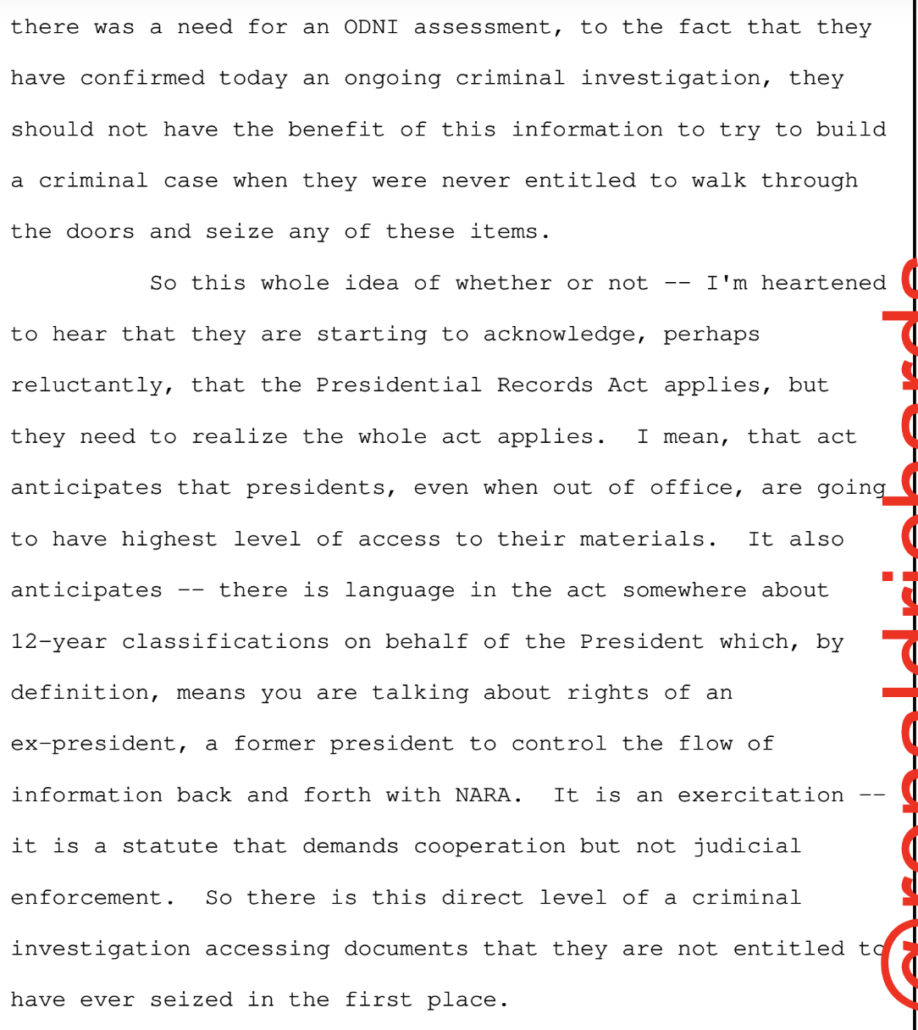 Update: CNN describes that the contents were mixed in with Biden’s personal items.

Among the classified documents from Joe Biden’s time as vice president discovered in a private office last fall are US intelligence memos and briefing materials that covered topics including Ukraine, Iran and the United Kingdom, according to a source familiar with the matter.

A total of 10 documents with classification markings were found last year in Biden’s private academic office and they were dated between 2013 and 2016, according to the source.

Update: I meant to show CNN’s correction earlier, but they’ve backed off the claim that the files were stored intermingled with personal items.

The vast majority of the items in the office contained personal Biden family documents, including materials about Beau Biden’s funeral arrangements and condolence letters, the source told CNN. It is not clear if the boxes with classified documents contained personal materials.

At Least 25 Lawyers Are Subjects or Witnesses in the Various Trump Investig... Matt Taibbi Confesses He Hasn’t Read His Own Twitter Files