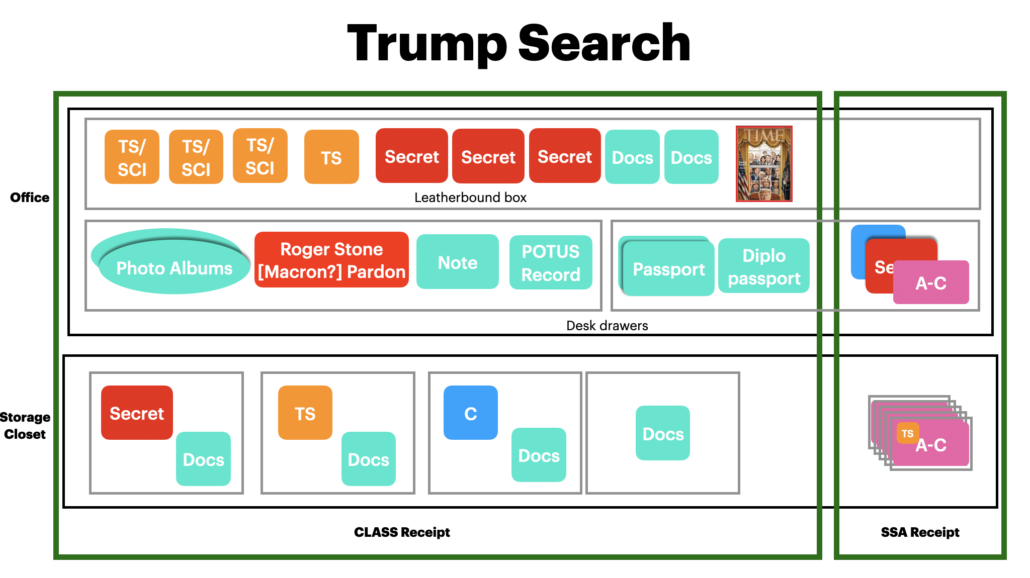 January 14, 2021: John Solomon Podcast bragging of detailed knowledge of what Russian investigation materials would be released in the coming days) described having newly obtained a January 20, 2021 Mark Meadows memo to DOJ instructing them to declassify documents from the Russian investigation.

On December 30, 2020, DOJ provided Trump a binder of material from the Russian investigation.

January 19, 2021: Trump letter to Archivist of the United States David Ferriero, FPOTUS designating (among others) Pasquale (Pat) Cipollone and Patrick Philbin as his representatives with the NARA

October 21, 2021: DOD IG report on Mike Ellis appointment, including discussion of his efforts to take sensitive NSA documents in January 2021

On January 31, 2022, NARA completed an initial inventory of the retrieved documents. It discovered over 100 documents with classification markings, comprising more than 700 pages. Some include the highest levels of classification, including Special Access Program (SAP) material.

May 1, 2022: Evan Corcoran letter to NARA asking for further delay (not public)

May 5, 2022: Evan Corcoran asks for access to the Trump records for representatives (not public)

May 10, 2022: Steidel Wall to Corcoran advising him she would give FBI access starting May 12

May 25, 2022: Corcoran to Bratt Letter laying out why Trump can’t be criminally investigated

June 22, 2022: Kash Patel announces he has been named Trump’s representative at NARA

September 5, 2022: Cannon opinion in which she leaks details about substance of privilege review

September 8, 2022: Motion for Stay of Injunction on Investigating Classified Documents

November 22, 2022: Trump motion for Judge Cannon to force DOJ to share the affidavit

11th Circuit Showdown: The Fight to Get the Documents to Charge against Trump

Trump’s Secret Document, with the Post-Administration Pollster Communication, in His Desk Drawer

Judge Raymond Dearie Prepares to Consult with the Archives

In Both Bannon and Stolen Document Cases, Trump’s Associates Claim He Is Still President

Before SCOTUS, DOJ Argues Trump Has Shown No Harm

Trump’s SCOTUS Appeal Hypothetically Could Do Damage Beyond Delay

Aileen Cannon Is Stiff-Arming the Press

Aileen Cannon Stomps on the Scales of Trumpy Injustice

(from Peterr) Three Questions at the Start of an Intelligence Review

Cause the Harm, and Then Say Nothing: Trump Has Had Aileen Cannon’s Proof of His Injury for a Week and Said Nothing

DOJ Raises Prospect that Trump Continues to Obstruct Investigation, Including of Empty Folders

Trump Sweeps Evidence of Obstruction under the Appellate Rug

Don’t Analyze Trump Legal Filings Based on the Law, Analyze Them Based on Power

“The Rule of Law is not assured:” The Cascading Constitutional Crisis Judge Aileen Cannon Deliberately Created

In Motion for a Stay, DOJ Raises Prospect that Trump Leaked Classified Documents

“A Coat Rack with Suit Jackets, as Well as Interior Décor Items Such as Wall Art and Frames”

Donald Trump Agrees He Is Living By Barack Obama’s Rules

The Full-Fitton: Trump’s Funny Math with the Federal Records Act

DOJ Has at Least One Card Left to Play: Congress’ Instinct for Self-Preservation

Return to Sender: DOJ Seized Evidence that Up to 90 Highly Sensitive Documents May Have Disappeared

No One Puts Roger Stone in a Box

“The President Was … Working in a Filing Room”

The Elements of the Offense for an 18 USC 793e Prosecution

Trump Had Human, Signals, and FISA Intelligence in an Insecure Room at Mar-a-Lago for a Year

Next Steps in the Trump Stolen Documents Investigation

Existing legal requests for Trump materials from the Archives

August 23, 2022: WaPo Report on document turnover, including description of Trump packing himself

September 16, 2022: WaPo report that, on September 21, Pat Philbin told NARA that Mark Meadows told him the boxes were full of clippings.