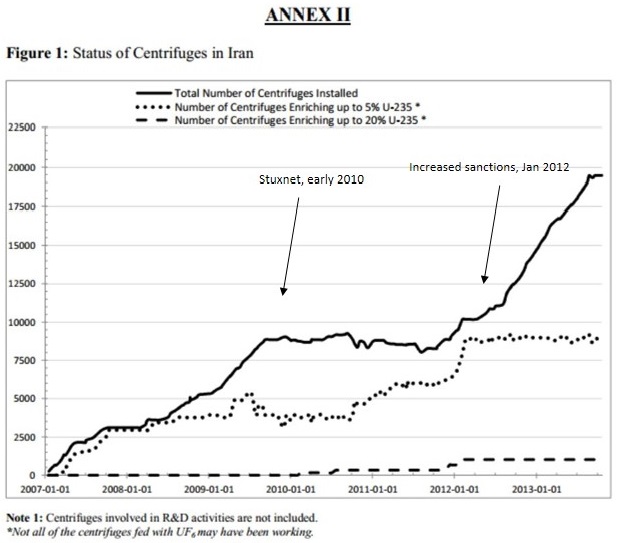 As we approach the re-start of the P5+1 international talks on Iran’s nuclear technology this weekend, there are multiple signals that Iran may be planning to make a major move aimed at reducing tensions. As CNN pointed out yesterday, Iran suggested last weekend that it may halt its enrichment of uranium to the 20% level and return to only enriching to 3.5%:

“Based on our needs and once the required fuel is obtained, we will decrease the production and we may even totally shift it to the 3.5%,” Iranian nuclear chief Fereydoun Abbasi said in a televised interview, according to state-run Press TV.

Iran does not plan to produce 20% enriched uranium for long, Abbasi said, according to Press TV.

Uranium enriched at 20% is typically used for hospital isotopes and research reactors, but is also seen as a shortcut toward the 90% enrichment required to build nuclear weapons. Nuclear experts say Iran’s supply is far greater than it would need for peaceful purposes.

Iran says there is a medical purpose to its nuclear program.

Further signaling that a big move is in the works, we have this today on PressTV:

“Iran’s representatives will participate in the negotiations with new initiatives and we hope that the P5+1 countries will also enter talks with constructive approaches,” Jalili told reporters in Tehran on Wednesday, IRNA reported.

He emphasized, “We are ready to hold progressive and successful talks on cooperation.”

At the same time that we are seeing hints of progress on the diplomatic front, it appears that a number of Iranian and Israeli spies have been taken out of action from their operations bases in Azerbaijan.

Back in the middle of March, Azerbaijan announced they had arrested 22 spies working for Iran:

The authorities in Azerbaijan have arrested 22 people on suspicion of spying for Iran, accusing them of links to the Iranian Revolutionary Guards.

The undated arrests were confirmed in a brief statement by the Azerbaijani national security ministry.

The 22 detainees are said to have received orders from the Revolutionary Guards to “commit terrorist acts against the US, Israeli and other Western states’ embassies and the embassies’ employees”.

Yesterday, Iran announced the arrests of a number of Israeli agents, some of whom are presumed to have been in Azerbaijan and some of whom were in Iran. From Mehr News: END_OF_DOCUMENT_TOKEN_TO_BE_REPLACED

In a move that is sure to disappoint war hawks who have been convinced that Iran’s enrichment of uranium to 20% has been to produce material for further enrichment to the 90%+ needed for nuclear weapons, Iran today very publicly had President Mahmoud Ahmadinejad load the first domestically produced nuclear fuel plates (which use 20% enriched uranium) into the Tehran reactor which is used to produce medically useful radioisotopes.  From Mehr News:

The Tehran reactor was loaded with domestically produced nuclear fuel plates during a ceremony held on Wednesday to unveil Iran’s latest nuclear achievements.

During the ceremony, a number of domestically produced radioisotopes, which are used for the treatment cancer, were also unveiled.

The same article also noted that Iran has increased its capacity for low-grade enrichment to 3.5%:

On Wednesday, the first cascade of a new generation of centrifuges was also installed at the Natanz nuclear enrichment facility and was brought on line.

With the installation of the new centrifuges, the capacity of the facility for the production of 3.5 percent enriched uranium was increased by 50 percent.

Further frustrating those who want to say Iran is moving rapidly toward construction of a nuclear weapon, Iran also took the next formal steps toward re-establishment of the Group 5 + 1 negotiations on nuclear technology:

According to the secretariat of Iran’s Supreme National Security Council, in the letter which was delivered to Ashton’s office on Wednesday, Jalili welcomed the readiness of the Group 5+1 (the five permanent UN Security Council members – Russia, China, Britain, France and the US plus Germany) to resume talks with Iran.

The Iranian chief negotiator underlined in his letter that returning to the negotiation table would be the best means to broaden cooperation between the two sides.

Despite the fear-mongering over Iran developing a nuclear weapon, Iran provided its alternate explanation yet again for why it had to produce its own 20% enriched uranium for the Tehran reactor:

After Iran announced to the IAEA that it had run out of nuclear fuel for its research reactor in Tehran, the Agency proposed a deal according to which Iran would send 3.5%-enriched uranium and receive 20-percent-enriched uranium from potential suppliers in return, all through the UN nuclear watchdog agency.

The proposal was first introduced on October 1, 2010, when Iranian representatives and diplomats from the Group 5+1 held high-level talks in Geneva.

But France and the United States, as potential suppliers, stalled the talks soon after the start. They offered a deal which would keep Tehran waiting for months before it could obtain the fuel, a luxury of time that Iran could afford as it was about to run out of 20-percent-enriched uranium.

Stay tuned for further developments to see how Iran’s use of a large portion of its 20% enriched uranium in the Tehran reactor will still result in their being described as on the fast track to a weapon by those who want a war there.