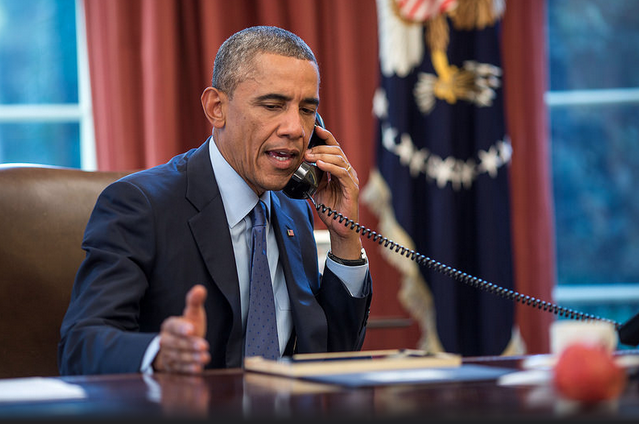 November 2, 2014 was the first annual International Day to End Impunity for Crimes Against Journalists.

To mark the date, the President just issued this statement.

History shows that a free press remains a critical foundation for prosperous, open, and secure societies, allowing citizens to access information and hold their governments accountable. Indeed, the Universal Declaration of Human Rights reiterates the fundamental principle that every person has the right “to seek, receive, and impart information and ideas through any media and regardless of frontiers.” Each and every day, brave journalists make extraordinary risks to bring us stories we otherwise would not hear – exposing corruption, asking tough questions, or bearing witness to the dignity of innocent men, women and children suffering the horrors of war. In this service to humanity, hundreds of journalists have been killed in the past decade alone, while countless more have been harassed, threatened, imprisoned, and tortured. In the overwhelming majority of these cases, the perpetrators of these crimes against journalists go unpunished.

All governments must protect the ability of journalists to write and speak freely. On this first-ever International Day to End Impunity for Crimes against Journalists, the United States commends the priceless contributions by journalists to the freedom and security of us all, shining light into the darkness and giving voice to the voiceless. We honor the sacrifices so many journalists have made in their quest for the truth, and demand accountability for those who have committed crimes against journalists.

It’s a wonderful sentiment, but I wonder if President Obama has thought this through.

After all, as Jeremy Scahill reported several years ago, President Obama personally intervened to ensure that Yemeni journalist Abdulelah Haider Shaye would remain in prison after having been tortured and subjected to a trumped up trial.

On February 2, 2011, President Obama called Yemeni President Ali Abdullah Saleh. The two discussed counterterrorism cooperation and the battle against Al Qaeda in the Arabian Peninsula. At the end of the call, according to a White House read-out, Obama “expressed concern” over the release of a man named Abdulelah Haider Shaye, whom Obama said “had been sentenced to five years in prison for his association with AQAP.” It turned out that Shaye had not yet been released at the time of the call, but Saleh did have a pardon for him prepared and was ready to sign it. It would not have been unusual for the White House to express concern about Yemen’s allowing AQAP suspects to go free. Suspicious prison breaks of Islamist militants in Yemen had been a regular occurrence over the past decade, and Saleh has been known to exploit the threat of terrorism to leverage counterterrorism dollars from the United States. But this case was different. Abdulelah Haider Shaye is not an Islamist militant or an Al Qaeda operative. He is a journalist.

In addition to interviewing Anwar al-Awlaki just as the US started targeting the radical cleric, Shaye also provided important coverage exposing the US role in an attack on the village of al Majala that massacred women and children.

On December 17, the Yemeni government announced that it had conducted a series of strikes against an Al Qaeda training camp in the village of al Majala in Yemen’s southern Abyan province, killing a number of Al Qaeda militants. As the story spread across the world, Shaye traveled to al Majala. What he discovered were the remnants of Tomahawk cruise missiles and cluster bombs, neither of which are in the Yemeni military’s arsenal. He photographed the missile parts, some of them bearing the label “Made in the USA,” and distributed the photos to international media outlets. He revealed that among the victims of the strike were women, children and the elderly. To be exact, fourteen women and twenty-one children were killed.

Shaye was kept in prison for an additional two and a half years after Obama’s intervention.

There are a number of other examples of US crimes against journalists that have been treated with impunity. In particular, the detention of Al Jazeera cameraman Sami al-Hajj at Gitmo for over six years, reportedly in an effort to recruit him to inform on his employer, comes to mind.

But with Shaye, President Obama personally intervened to ensure a journalist would remain imprisoned in a brutal prison system.

Does President Obama decry the impunity he has enjoyed for imprisoning Shaye for his journalism?