[UPDATE at end] Following the Senate today has been like watching an impeding train wreck. The track’s out just ahead, the conductor knows it, as do all the rest of the crew aboard. Not one of them has the smarts or spine to stop this crazy train.

So while this post was supposed to be about three things, it’s really all just one: the abject failure of Congressional Republicans to fashion effective health care legislation which meets their oath of office by calming the public’s worries to insure domestic tranquility, providing for the common defense against illness and injury, and promoting the general welfare through improved health.

Anthony Scaramucci was hired to be a circus act, a distraction from whatever the White House is trying to get away with. Clearly he’s good at that. Screw that. I’ve muted his name on Twitter; you’ll be surprised what you see when you do the same across your social media and news feeds.

This, from the rally on Capitol Hill tonight: 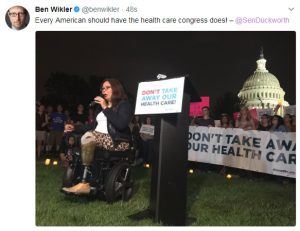 It’s this simple. Congress’ health care plan is America’s health care plan. Strip away everything else, start from the ground up, fund it, legislate and launch it.
But sadly the party leading Congress is incapable of vision. Get some, stat.

By the way, for you anti-Democratic Party folks: the Senate Dems are solidly unified behind killing all iterations of Repeal-and-Replace, and tonight, the ‘skinny repeal’. There are no defections. They are willing to work on a good faith bipartisan solution which fixes the ACA’s challenges. Senate GOP could meet them on this, but no — scoring a political win is more important to them than doing the right thing by the American public.

If you want to stay on top of this, here are a few key accounts on Twitter:

Ben Jacobs at The Guardian

Right now the Senate is headed toward a vote around 2:00-3:00 a.m. on a bill for which is no text or a CBO score. Paul Ryan will follow suit as soon as possible, no matter what bullshit you hear about not wanting the so-called ‘skinny repeal’. They are doing this in the middle of the night to hide from the public, literally on a Friday late in summer which in the past has been news dump zone. It’s a fraud, a total sham.

All eight pages of the ‘skinny repeal’ bill have now been posted.