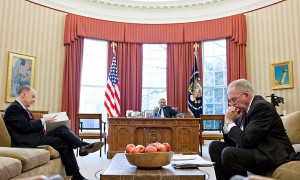 As I said earlier, the parallel between the Jo Becker/Scott Shane Angler 2.0 story and the earlier series by Becker and Barton Gellman is hard to miss.

But I’m very interested in how the stories are structured differently. With Angler 1.0, the story was very clearly about Dick Cheney and the methods he used to manipulate Bush into following his advice. Here, the story is really about John Brennan, Obama’s Cheney, portrayed deep in thought and foregrounding Obama in the article’s picture. Indeed, halfway through, the story even gives biographical background on Brennan, the classic “son of Irish immigrants” story, along with Harold Koh’s dubious endorsement of Brennan’s “moral rectitude.”

But instead of telling the story of John Brennan, Obama’s Cheney, the story pitches Obama as the key decision-maker–a storyline Brennan has always been one of the most aggressive pitchmen for, including when he confirmed information on the Anwar al-Awlaki strike he shouldn’t have. In a sense, then, Brennan has done Cheney one better: seed a story of his own power, but sell it as a sign of the President’s steeliness.

The Silent Sources for the Story

I already pointed out how, after presenting unambiguous evidence of Brennan’s past on-the-record lies, the story backed off calling him on it.

But there are other ways in which this story shifts the focus away from Brennan.

A remarkable number of the sources for the story spoke on the record: Tom Donilon, Cameron Munter, Dennis Blair, Bill Daley, Jeh Johnson, Michael Hayden, Jim Jones, Harold Koh, Eric Holder, Michael Leiter, John Rizzo, and John Bellinger. But it’s not until roughly the 3,450th word of a 6,000 word article that Brennan is first quoted–and that’s to largely repeat the pre-emptive lies of his drone speech from last month.

“The purpose of these actions is to mitigate threats to U.S. persons’ lives,” Mr. Brennan said in an interview. “It is the option of last recourse. So the president, and I think all of us here, don’t like the fact that people have to die. And so he wants to make sure that we go through a rigorous checklist: The infeasibility of capture, the certainty of the intelligence base, the imminence of the threat, all of these things.”

That is the only on-the-record direct quote from Brennan in the entire article, in spite of the centrality of Brennan to the story.

And I would bet several of the sources quoted anonymously in the section describing Obama’s method of counting the dead (which still ignores the women and children) are Brennan: “a top White House adviser” describing how sharp Obama was in the face of the first civilian casualties; “a senior administration official” claiming, in the face of credible evidence to the contrary, that the number of civilians killed in drone strikes in Pakistan were in “single digits.”

Note, too, the reference to a memo his campaign national security advisors wrote him.

“Pragmatism over ideology,” his campaign national security team had advised in a memo in March 2008. It was counsel that only reinforced the president’s instincts.

The memo was written not long after Brennan started playing a more central role among Obama’s campaign advisors. But the story makes no mention of his presumed role in it. Further, in describing Jeh Johnson to introduce a quote, the piece notes that he was “a campaign adviser” (it doesn’t say Johnson was also focused on voter protection). But it does not note that Brennan, too, was a key campaign advisor, one with an exclusively national security focus.

Nor does the story note, when it describes how Obama “deployed his legal skills … to preserve trials in civilian courts” it was John Brennan making that case, not the Attorney General.

In other words, in several places in this story, Brennan plays a key role that is downplayed.

Given that fact, I’m really interested in the several places where the story adopts a pro-drone viewpoint (it does adopt a more critical stance in the narrative voice at the end).

For example, the story claims, in the first part of the story, that the drone strikes “have eviscerated Al Qaeda” without presenting any basis for that claim. This, in spite of the fact that al Qaeda has expanded in Yemen since we’ve started hitting it with drones.

Later, the article uncritically accepts the claim that the drone–regardless of the targeting that goes into using it–is a “precision weapon” that constitutes a rejection of a “false choice between our safety and our ideals.”

The care that Mr. Obama and his counterterrorism chief take in choosing targets, and their reliance on a precision weapon, the drone, reflect his pledge at the outset of his presidency to reject what he called the Bush administration’s “false choice between our safety and our ideals.”

For fucks sake! This article describes how the White House has adopted a “guilt by association” approach to drone targeting. It describes renamed signature strikes (though presents what is almost certainly an outdated picture of the targeting review process). Yet it uncritically accepts this “precision” claim–which clearly reflects a source’s judgment–as true.

Finally, a potentially even bigger bias is in the presentation of the al-Majala strike on December 17, 2009.

It killed not only its intended target, but also two neighboring families, and left behind a trail of cluster bombs that subsequently killed more innocents. It was hardly the kind of precise operation that Mr. Obama favored. Videos of children’s bodies and angry tribesmen holding up American missile parts flooded You Tube, fueling a ferocious backlash that Yemeni officials said bolstered Al Qaeda.

The sloppy strike shook Mr. Obama and Mr. Brennan, officials said, and once again they tried to impose some discipline.

The story doesn’t name who the target was; it says only that the strike killed him, and the NYT repeats the claim without asking for such details.

As I have noted, though, sources speaking immediately after the strike explained the target struck where “an imminent attack against a U.S. asset was being planned.” (The quotes here are from the source, not the ABC report.) There was, of course, an imminent attack being planned at the time, one about which we had at least some advance intelligence. That was Umar Farouk Abdulmutallab’s attack. I’m pretty sure the strike on a Yemeni site 10 days after he left the country missed him, though.

These last two quotes–perhaps all three–look like comments a White House figure (and it’ll surprise no one that I suspect it’s Brennan) gave on deep background, such that his exact words are used, but without quotation marks or any indication of the source. Credible journalists would have no other reason to make such unsubstantiated claims, particularly the “precision” claim that they disprove elsewhere in the same article.

Ultimately, the depiction of John Brennan as Obama’s puppetmaster is most interesting in the telling of Baitullah Mehsud’s killing. This version conflicts in key ways from the story that Joby Warrick told in his book, starting with the uranium claim that provided the excuse for targeting him. And while I’m working from memory, I believe Warrick portrayed the approval of that killing–which might kill Mehsud’s wife in addition to Mehsud–as involving Panetta alone. This version says Panetta consulted Obama–through Brennan.

Then, in August 2009, the C.I.A. director, Leon E. Panetta, told Mr. Brennan that the agency had Mr. Mehsud in its sights. But taking out the Pakistani Taliban leader, Mr. Panetta warned, did not meet Mr. Obama’s standard of “near certainty” of no innocents being killed. In fact, a strike would certainly result in such deaths: he was with his wife at his in-laws’ home.

“Many times,” General Jones said, in similar circumstances, “at the 11th hour we waved off a mission simply because the target had people around them and we were able to loiter on station until they didn’t.”

But not this time. Mr. Obama, through Mr. Brennan, told the C.I.A. to take the shot, and Mr. Mehsud was killed, along with his wife and, by some reports, other family members as well, said a senior intelligence official.

I’m not surprised by (or critical of) the conflict in the stories. It seems like Warrick relied primarily on CIA sources telling a packaged version of the strike, while this story tells another packaged version of it. (Note, curiously, Panetta is only named in this passage and never quoted.)

But I am struck by how obviously this story–whether filtered through Brennan as a direct source for this story, or filtered through Brennan for Panetta’s consumption at the time–depends on John Brennan to narrate Obama’s role. If he weren’t involved somehow, the NYT wouldn’t have included the “through Mr. Brennan.” And while the detail doesn’t matter in the grand scheme of things–Mehsud’s wife’s death will weigh no more or less against Obama’s and Brennan’s record than Abdulrahman al-Awlaki or the Bedouin women and children at al-Majala–it is a testament to the degree to which this story, and so many of those cited in this article, depend on Brennan narrating Obama’s role.

As I’ll show in a later post, I think this story is an attempt to combat the picture of John Brennan’s private signature strike shop that has developed over the last month. Perhaps it’s even a way to protect himself by implicating the President, as Brennan’s old boss George Tenet did with torture. Perhaps, too, this article (which given the number of on-the-record quotes, must be sanctioned) is meant to add to the campaign’s portrayal of Obama as a fearless counterterrorism warrior.

But I’m just as fascinated by the way that Angler 2.0 managed to wield puppet strings for the story about himself, too.