Yesterday, Mike Lee trolled Democrats by suggesting that Merrick Garland, who has a lifetime seat on the DC Circuit, should vacate that and lead the FBI. In a piece explaining how utterly moronic the many Democrats who took his bait are, Dave Weigel explains this is “Why Liberals Lose” — not just because they never press for advantage effectively, but because they so often fall prey when Republicans do.

We live in a golden age of political stupidity, but I’m not being hyperbolic when I say this: The idea of pulling Judge Merrick Garland off the D.C. Circuit federal appeals court and into the FBI is one of the silliest ideas I’ve seen anyone in Washington fall for. It’s like Wile E. Coyote putting down a nest made of dynamite and writing “NOT A TRAP” on a whiteboard next to it. It’s also an incredibly telling chapter in the book that’s been written since the Republican National Convention — the story of how Republicans who are uncomfortable with the Trump presidency gritting their teeth as they use it to lock in control of the courts.

You should definitely read all of Weigel’s piece, which is spot on.

But there are other aspects that the success of Lee’s ploy explain about Why Liberals Lose. First and foremost, it shows how mindlessly Democrats adopt the playing field that Republicans deal them.

I mean, even as Democrats have been pushing for months to use the Russian scandal to impeach Trump, and even at the moment where that actually seems feasible (down the road), most Democrats simply accepted the necessity of replacing Jim Comey and have shifted instead to fighting the worst names being floated, people like Trey Gowdy (an initial trial balloon) and Alice Fisher and Michael Garcia, who’re reportedly being formally considered.

Why are Democrats even accepting that Trump should get to replace Comey?

According to CNBC’s count from mid-April, Trump had filled just 24 of the 554 Senate confirmed positions in government. 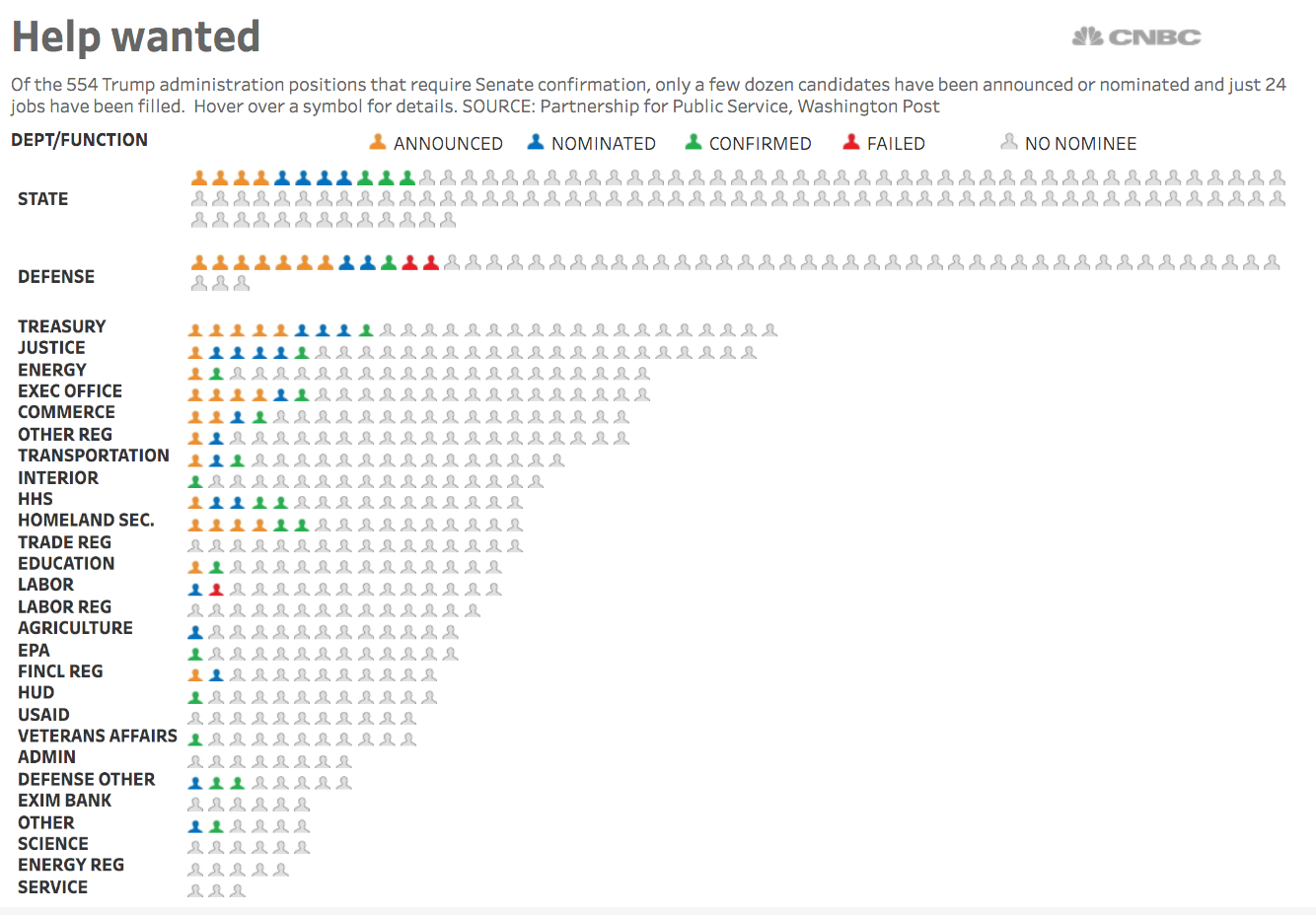 Sure, Trump has filled a handful more in the interim month, but Trump is otherwise not in a rush to staff the government. Yet he has immediately turned to replacing Comey.

There is nothing more illegitimate than for Trump to be able to give someone a ten year term as FBI Director because he fired Jim Comey.

Trump is no longer hiding the fact that he fired Comey to try to undercut the Russian investigation. And the timeline is clear: the dinner to which Trump called Comey to twice demand his loyalty took place on January 27.

As they ate, the president and Mr. Comey made small talk about the election and the crowd sizes at Mr. Trump’s rallies. The president then turned the conversation to whether Mr. Comey would pledge his loyalty to him.

Mr. Comey declined to make that pledge. Instead, Mr. Comey has recounted to others, he told Mr. Trump that he would always be honest with him, but that he was not “reliable” in the conventional political sense.

By Mr. Comey’s account, his answer to Mr. Trump’s initial question apparently did not satisfy the president, the associates said. Later in the dinner, Mr. Trump again said to Mr. Comey that he needed his loyalty.

Mr. Comey again replied that he would give him “honesty” and did not pledge his loyalty, according to the account of the conversation.

That means it took place the same day of Sally Yates’ second conversation with Don McGahn about FBI’s investigation into Mike Flynn (and by association, I always point out, Jared Kushner).

It was always a pipe dream for Democrats to think they could stave off Neil Gorsuch’s confirmation, in part because you really do need a full panel at SCOTUS.

But for the moment, the FBI will continue to run the same way the rest of government is running: with the acting officials who’re filling in until Trump gets around to filling the spot. Moreover, Andrew McCabe, the Acting FBI Director, is a Comey loyalist who will ensure his initiatives will continue for whatever portion of Comey’s remaining 6 years he gets to serve.

This is important not just for the Russian investigation — it’s important to the future of our democracy. Alice Fisher, for example, would be an even more insanely pro-corporate FBI Director than Comey (former Board Member of HSBC, remember) or Mueller.

Democrats should be out there, loudly and in unison, decrying how inappropriate it would be for Trump to get to replace Comey when everyone watching knows the firing was one of the most corrupt things a President has done in a century.

In a HuffPo column arguing for a Commission to look into Bush era crimes, John Conyers mentions something people on the Hill rarely talk about: the 2004 CIA Inspector General report on torture.

Nor do I agree that the relevant facts are already known. While disparate investigations by Committees of congress, private organizations, and the press have uncovered many important facts, no single investigation has had access to the full range of information regarding the Bush administration’s interrelated programs on surveillance, detention, interrogation, and rendition. The existence of a substantially developed factual record will simplify the work to come, but cannot replace it. Furthermore, much of this information, such as the Central Intelligence Agency’s 2004 Inspector General report on interrogation, remains highly classified and hidden from the American people. An independent review is needed to determine the maximum information that can be publicly released.

Conyers links to this Jane Mayer interview about the report by way of explaining the significance of the report.

One of the lingering mysteries in Washington has been what happened to the CIA internal probe into homicides involving the program. You note that CIA Inspector General (IG) John Helgerson undertook a study and initially concluded, just as the Red Cross and most legal authorities in the United States and around the world, that the program was illegal and raised serious war crimes issues. Helgerson was summoned repeatedly to meet privately with Vice President Cheney, the man who provided the impetus for the program, and it appears as a result of these meetings the IG’s report was simply shut down. Would those probes have brought into question the Justice Department’s specific approval of torture techniques used by the CIA–approval that involved not just John Yoo, but much more specifically Michael Chertoff and Alice Fisher, the two figures who ran the criminal division?

The fact that John Helgerson—the inspector general at the CIA who is supposed to act as an independent watchdog—was called in by Cheney to discuss his tough report in 2004 is definitely surprising news. Asked for comment, Helgerson through the CIA spokesman denied he felt pressured in any way by Cheney. But others I interviewed have described the IG’s office to me as extremely politicized. They have also suggested it was very unusual that the Vice President interjected himself into the work of the IG. Fred Hitz, who had the same post in previous administrations, told me that no vice president had ever met with him. END_OF_DOCUMENT_TOKEN_TO_BE_REPLACED

The reason I ask is that there’s a seeming contradiction between what Yoo claims in his March 2003 torture memo regarding DOD practices and Alice Fisher and Michael Chertoff’s statements to DOJ’s OIG regarding related events. At issue is whether the Criminal Division of DOJ–Fisher was the Deputy Assistant Attorney General in 2003, and just resigned from Criminal Division Chief; Chertoff was head of the Criminal Division when the Administration was developing its torture policies–told OLC how they would treat certain actions criminally. The Yoo Torture Memo claims that OLC had consulted with the Criminal Division about which statutes would not apply to the military during the conduct of war:

The Criminal Division concurs in our conclusion that these canons of construction preclude the application of the assault, maiming, interstate stalking, and torture statutes to the military during the conduct of a war.

But the DOJ OIG report on torture records Alice Fisher stating that the Criminal Division did not give advice–at least not on the techniques themselves.

Fisher stated that at some point she became aware that the CIA requested advice regarding specific interrogation techniques and that OLC had conducted a legal analysis. She also said she was aware of two OLC memoranda on that topic, but they did not relate to the FBI. Fisher also told the OIG that Chertoff was very clear that the Criminal Division was not giving advice on which interrogation techniques were permissible and was not "signing off" in advance on any techniques. (page 70fn; 113/438)

And Chertoff claims that he was asked–but refused to give–sign off on particular techniques.

Chertoff said that the Criminal Division was asked to provide an "advance declination" in connection with the CIA’s use of some techniques, but that he had refused to provide it.  (page 100-101; 143-4/438)

END_OF_DOCUMENT_TOKEN_TO_BE_REPLACED

Alice S. Fisher, chief of the Justice Department’s criminal division, said yesterday that she will leave government service at the end of the month after nearly three years overseeing major public corruption and corporate fraud cases.

Her deputy, Barry M. Sabin, a former federal prosecutor in Miami, is serving in an acting capacity, and her chief of staff left for private practice earlier this year.

Justice Department officials said they are not ready to announce who will replace Fisher, who previously worked for several years at the law firm Latham & Watkins.

Fisher’s signature initiatives include a crackdown on corporate bribes and a new strategy to attack international organized crime.

No word yet on why Fisher is out, but JohnLopresti notes:

Reportedly, Robert Coughlin, who is former DoJ criminal division deputy chief of staff for Alice Fisher, last week filed and Judge Ellen Huvelle accepted, a guilty plea to conflict of interest charges for his work gifting and fundraising with Abramoff. As both DOJ’s public integrity section and the WA-DC US atty have recused, Baltimore Deputy US atty Stuart Goldberg is managing the case against Coughlin. The linked article says DoJ is mum about the process it used to select the Baltimore USAtty’s office to sub for the recused DC USAtty and the PublicIntegrity section, but sugggests associates involved in the matter may be at DoJ yet.

I don’t know whether I buy Lopresti’s suggestion (though it is a good suggestion). After all, if Fisher were about to be implicated in the Abramoff scandal, she probably would quit effectively immediately, not in three weeks.