Sedition Is the Foundation on Which the Trump Associate Investigation Builds

As I laid out in this post, I’m impatient with those who claim the government has taken a new direction in the January 6 investigation with subpoenas to people like — most audibly — Ali Alexander. Alexander got a number of journalists who know better to repeat his claim that he was “cooperating” with the investigation rather than merely “complying” with a subpoena. Few of those journalists pointed out real holes in his cover story — including his silence about Roger Stone and Alex Jones, his disavowal of communications with militias before he arrived at the Capitol, his use of cover organizations to get his permits, and his seeming message to co-conspirators that if he once had evidence, it is no longer in his possession.

In his statement, Alexander sought to separate himself from the substance of the investigation, saying he did not coordinate with the Proud Boys and suggesting his contact with the Oath Keepers was limited to accepting an offer for them to act as ushers at an event that never took place: his own permitted event near the Capitol, which didn’t occur because of the mob attack on the Capitol. The Oath Keepers are the subject of conspiracy charges for their roles in breaching the Capitol that day.

“I did not finance the Ellipse equipment. I did not ever talk with the White House about security groups. Any militia working security at the Ellipse belonged to “Women for America First,” not us,” Alexander said. “I did not coordinate any movements with the Proud Boys or even see them that day. I did take Oath Keepers offer to act as ushers for the Area 8 event but all of that was lost in the chaos. I wasn’t in communication with any of the aforementioned groups while I was near the Capitol working to get people away from the building. Lastly, I’m not willing to presume anyone’s guilt.”

“I did nothing wrong and I am not in possession of evidence that anyone else had plans to commit unlawful acts,” Alexander said. “I denounce anyone who planned to subvert my permitted event and the other permitted events of that day on Capitol grounds to stage any counterproductive activities.”

This is classic Roger Stone-schooled disinformation and should be treated as such.

Reporters have, undoubtedly based on really good sourcing, emphasized the existence of a new grand jury focusing on Trump’s associates, and from that, argued it’s a new direction — though as I’ve documented, DOJ has availed themselves of at least six grand juries thus far in this investigation.

But how could an investigation of Alexander’s actions be new if DOJ successfully debunked much of his current cover story — that he was “working to get people away from the building” — last November? Alexander co-traveler Owen Shroyer attempted to offer the same false claim in an attempt to throw out charges — filed in August — against him, but Judge Tim Kelly rejected that attempt on January 20. How could this be a totally new direction if prosecutors would have obtained Alexander’s Stop the Steal listserv as a result of Brandon Straka’s “cooperation” in early 2021? How could it be a new direction if DOJ has gotten guilty pleas from those who went first to the Capitol, then to the East front, and finally breached the building in response to lies about Alexander’s rally permits told by Alex Jones? DOJ has, demonstrably, been laying the groundwork for a subpoena to Alexander for over year.

And it’s not just Alexander. Steps DOJ took over the past year were undoubtedly necessary preconditions to going after Trump’s close associates. Those include:

These are efforts that started in January 2021. Some of the most important — the way DOJ seized Rudy’s comms and got a privilege review without revealing a January 6 warrant — started on Lisa Monaco’s first day in office.

But there’s a more important thing that DOJ probably believed they needed before going after Trump and his close associates: compelling proof that Trump wielded the mob in his effort to obstruct the vote count, obtaining the proof in the yellow boxes, below. That was one of the things I was trying to lay out in this post. 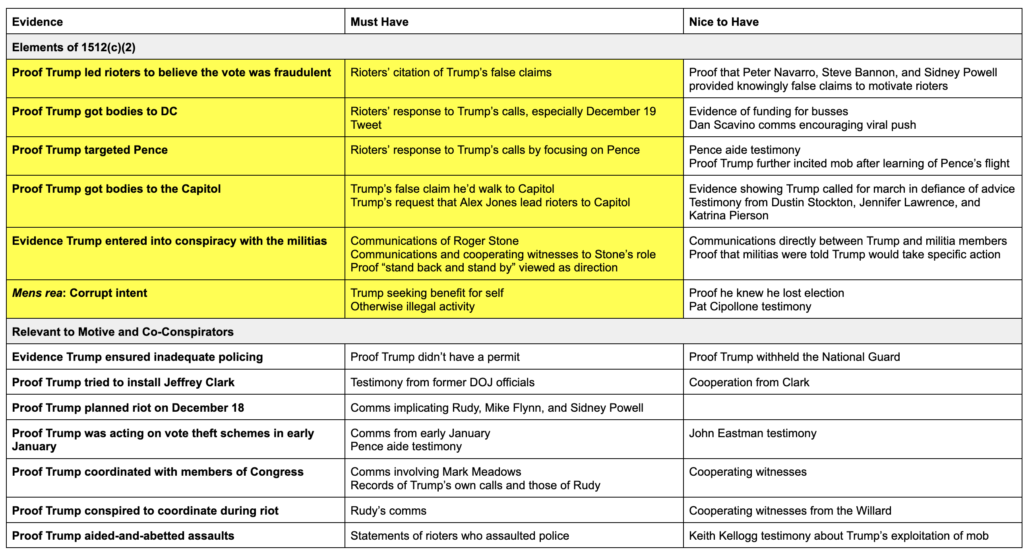 While there are specific things Trump and his associates did that were illegal — the call to Brad Raffensperger, the fake elector certificates, the illegal demand of Mike Pence — many of the rest are only illegal (at least under the framework DOJ is using) if they are tied to Trump’s successful effort to target the mob at American democracy. You first have to prove that Trump fired the murder weapon, and once you’ve established that proof, you can investigate who helped Trump buy the weapon, who helped him aim it, who loaded the gun for him, who was standing behind him with four more weapons to fire if his own shot failed to work.

And this is why I’m interested in the apparent two month process it appears to have taken DOJ to shift its main focus from the work of the January 8, 2021 grand jury, whose work culminated in the January 12, 2022 seditious conspiracy indictment against Stewart Rhodes, and the February 14, 2022 grand jury, the foundational overt act of which was the March 7 conspiracy charge against Enrique Tarrio.

The first grand jury proved that the vast majority of the rioters, whether trespassers or assault defendants, got there via one of three methods:

Judge Amit Mehta also seems to believe that the grand jury developed proof that many of those who assaulted cops were aided and abetted by Donald Trump. The first grand jury also proved that of those who — having been led to believe false claims about vote fraud based on over three months of propaganda — had the intent of obstructing the vote count, a great number had the specific goal of pressuring or punishing Mike Pence. While the intent of pressuring Pence came, for some rioters, from militia hierarchies, for most others, it came directly from Trump.

This is my hypothesis about the seeming shift from using the January 8 grand jury as the primary investigative grand jury to launching a new one on February 14. The January 8 grand jury has largely completed its investigation into what caused the riot, how it was orchestrated, who participated; the remaining prosecutions that don’t require and affect the larger picture will be and have been charged via the November 10 grand jury. But by indicting Tarrio and showing, with Charles Donohoe’s cooperation, that everything the Proud Boys did emanated from Tarrio’s orders and, by association, from whatever understanding Tarrio had about the purpose of the riot from his communications with people close to Trump, DOJ and the Valentine’s Day grand jury will move onto the next level of the conspiracy to obstruct the vote count. Again, that’s just a hypothesis — we’ll see whether that’s an accurate read in the weeks ahead. But it’s not a new direction at all. It is the direction that the investigation has demonstrably been headed for over a year.

Update: In a statement pretending the stories about his cooperation were leaked by DOJ, Alexander insists he is not cooperating, but complying.

After consultation with counsel, we provided a statement that established that I was not a target of this grand jury; I haven’t been accused of any criminal wrongdoing; and that I was complying, as required by law, with their probe.

Useful idiots on the right, clinging to a New York Times headline that sensationalizes my compliance with a subpoena, will empower the Deep State which planted these stories to give their political investigation more legs to hurt our election integrity movement and Trump’s 2024 prospects. [my emphasis]

The rest of the statement should convince anyone that this is a replay of the same bullshit we saw from Stone and Jerome Corsi in the Mueller investigation.