Washington has tried its very best to sweep the war in Afghanistan under the rug. Most of the press dutifully went along with the fiction of declaring the war to have ended in December. The military joined in, trying to classify virtually all information coming out of Afghanistan. That classification move has been backtracked somewhat, but we still haven’t seen a revised quarterly report from SIGAR with the newly released data.

For those who care about the truth of what is really taking place in Afghanistan as a result of the misguided US action, it is a good thing that Washington cannot stifle information flowing out of the United Nations Assistance Mission in Afghanistan. UNAMA has been tracking civilian casualties in Afghanistan since 2009, and their latest report was released today (press release is here and full report in pdf form is here). The news is not good at all. Deaths jumped by 25% from 2013, going from 2969 to 3699. Injuries also showed a sharp increase, from 5668 to 6849. These numbers simply do not comport with the rosy statements coming out of the Pentagon on what our troops in Afghanistan “accomplished”, how the Taliban are being defeated and how the ANSF are now “hugely capable”. Civilian casualties in Afghanistan have shown a relentless rise since the UN started collecting data:

It is harder to find data for the years leading up to 2009, but here is one report (pdf) in tabular form from Costs of War:

The figures from this report include only a subset of the types of death tracked by UN, accounting for the slight discrepancy in the years of overlapping data.

US military operations and continued presence in Afghanistan has been a disaster for civilians there. The insurgency which has arisen in response to the US presence is responsible for most of the casualties, but it is hard to see how these numbers would be as high if the US had simply left after deposing the Taliban in the first few weeks of the operation.

In addition to tracking casualties, the UN collects information on war crimes. Units of the Afghan Local Police are notorious in this regard (ALP most often are comprised of private militias that have been given a brief bit of training by US death squad trainers from JSOC and/or CIA). From the report:

For example, on 11 July, an ALP member shot and killed a local shopkeeper after an argument over ice. On 7 July, an ALP commander and four of his men assaulted (and injured) four civilians in Jorum district, Badakhshan province, during a wedding party. The reason for the beating was reportedly that the family had failed to provide food to the ALP as demanded.

UNAMA documented multiple examples of ALP intimidating and ordering the displacement of families from their communities. For example, on 12 October, ALP forcibly displaced 150-200 families from Khak-e-Safed district, Farah province. The ALP had warned the local population not to allow the Taliban to launch attacks from the village. The Taliban had also threatened the local population not to cooperate with the ALP. After Taliban fighters established positions in the area, the ALP ordered the 150-200 families to leave the area, resulting in displacement of an entire village, mainly to Farah city.

I would imagine that someone in Washington is busy today trying to find a way to prevent UNAMA from releasing its next report. 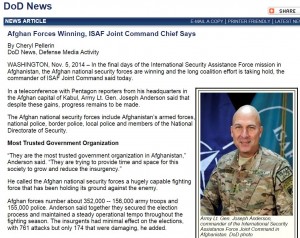 It would appear that even the Washington Post is beginning to see through the way that the Defense Department continues to make outrageous claims regarding the capabilities of Afghan National Security Forces. An article published last night to the Post’s website carries the headline “Panetta, other U.S. officials in Kabul paint rosy picture of Afghan situation”. The article opens in conventional news-as-transcription-of-government-narrative fashion:

With Defense Secretary Leon E. Panetta in Kabul to take stock as the Obama administration weighs how quickly to draw down troops over the next two years, a senior U.S. military commander on Wednesday hailed the progress Afghan security forces have made.

Marine Maj. Gen. Lawrence D. Nicholson, the head of operations for the U.S.-led coalition in Afghanistan, said NATO troops have begun a radical shift in mission: doing the bare minimum to support Afghan troops, who, he said, are starting to operate unilaterally. “We’re now un-partnering from” Afghan forces, Nicholson told reporters Wednesday evening. “We’re at that stage of the fight.”

The article then plants a hint, stating that if Afghan forces are seen as achieving capability to function on their own, the US withdrawal can be accelerated from the current plan of taking another two years.

Remarkably, the Post then moves on to provide some perspective for Nicholson’s claim:

The assessment Nicholson offered, however, is far rosier than the one that U.S. officials have provided recently. They have been citing the resilience of the Taliban and the shortcomings of the Afghan government and military.

Just one of 23 Afghan army brigades is able to operate on its own without air or other military support from the United States or NATO, according to a Pentagon report to Congress that was released Monday.

But Nicholson wants us to believe that even though the Defense Department has been lying for years about Afghan troop capabilities, they really, really mean it this time and we should believe them:

Nicholson said that although U.S. commanders have made “disingenuous” claims in the past about the extent to which Afghans were acting as equal partners in joint missions, officials now see the Afghan army as ready to operate largely on its own, albeit with key logistical and financial support from NATO. The new strategy as the United States tries to transfer greater responsibility to the Afghan government and military is one of “tough love,” Nicholson said.

Sadly, Nicholson’s claims appear to have no more credibility than previous DoD claims on ANSF capabilities. Consider this exchange from the briefing held Monday at the Defense Department, featuring as speakers Senior Defense Official “[Briefer name deleted]” and Senior State Department Official “[briefer name deleted]” where we see that the Post isn’t the only media operation that sees through the duplicity. This exchange starts with a question from Lita Baldor of AP [emphasis added]: END_OF_DOCUMENT_TOKEN_TO_BE_REPLACED