Whether counter-arguments or conspiracy theories, it’s interesting how certain narratives are pushed when tensions rise. But are they really theories or conditioning? And if conditioning, could other media infrastructure changes create more successful conditioning?

In an interview with Fox News post-Helsinki summit, Vladmir Putin made a point of blaming the Democratic Party for “manipulations of their party.”

…“The idea was about hacking an email account of a Democratic candidate. Was it some rigging of facts? Was it some forgery of facts? That’s the important thing that I am trying to — point that I’m trying to make. Was this — any false information planted? No. It wasn’t.”

The hackers, he said, entered “a certain email account and there was information about manipulations conducted within the Democratic Party to incline the process in favor of one candidate.” …

Have to give Putin props for sticking with a game plan — increase friction within the American left and fragment Democratic Party support to the benefit of Trump and the Republican Party at the polls and ultimately Putin himself if sanctions are lifted. Christopher Steele indicated in the Trump-Russia dossier that the Kremlin was using active measures to this effect in 2016 to widen the divide between Sanders and Clinton supporters; apparently left-splitting active measures continue.

But this is only part of an attack on the Democratic Party; another narrative undermines both the DNC and the FBI by questioning the investigation into the DNC’s hacking. Why didn’t the FBI take possession of the server itself rather than settle for an image of the system? A key technical reason is that any RAM-resident malware used by hackers will disappear into the ether if the machine is turned off; other digital footprints found only in RAM memory would likewise disappear. “The server” isn’t one machine with a single hard drive, either, but 140 devices — some of which were cloud-based. Not exactly something the FBI can power down and take back to a forensic lab with ease, especially during the hottest part of a campaign season.

But these points are never effectively made as a counter narrative, though some have tried with explainers, and certainly not featured in broadcast or cable news programs. The doubt is left to hang in the public’s consciousness, conditioning them to question FBI’s competence and the validity of their investigative work.

I’d begun drafting this post more than a week ago, but came to a halt when FCC chair Ajit Pai did something surprisingly uncorrupt by putting the brakes on the Sinclair-Tribune merger.

Sinclair Broadcast Group is a propaganda outlet masquerading as a broadcast media company. The mandatory airing of Boris Epsteyn’s program across all Sinclair stations offers evidence of Sinclair’s true raison d’etre; Epsteyn is a Russian-born former GOP political strategist who has been responsible for messaging in both the McCain-Palin campaign and the Trump administration, including the egregious 2017 Holocaust Remembrance Day statement which omitted any mention of Jews. The mandatory statement Sinclair management forced its TV stations to air earlier this year about “fake news” is yet another. The forced ubiquity and uniformity of messaging is a new element at Sinclair, which already had a history of right-wing messaging including the attempt to run a Kerry-bashing political movie to “swiftboat” the candidate just before the 2004 elections.

Sinclair and Tribune Media announced a proposed acquisition deal last May. If approved, the completed acquisition would give Sinclair access to 72% of U.S. homes — an insanely large percentage of the local broadcast TV market effectively creating a monopoly. There was bipartisan Congressional pushback about this deal because of this perceived potential monopoly.

FCC’s Ajit Pai wanted to relax regulations covering UHF stations — they would be counted as less than a full VHF station and therefore appear to reduce ownership of marketshare. Democrats protested this move as it offered Sinclair unfavorable advantage when evaluating stations it would acquire or be forced to sell during its Tribune acquisition.

Fortunately, Pai had “serious concerns” about the Sinclair-Tribune deal: 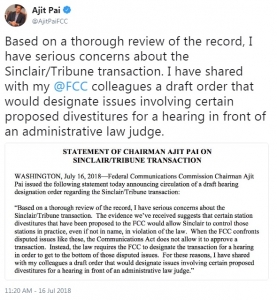 We have no idea to which administrative judge this deal may be handed, let alone their sentiments on media consolidation. We don’t know if this judge might be Trump-friendly and rule in favor of Sinclair, taking this horror off Ajit Pai’s back — which might be the real reason Pai punted after his egregious handling of net neutrality and the pummeling he’s received for it, including the hacking of the FCC’s comments leading up to his decision to end Obama-era net neutrality regulations and subsequent “misleading” statements to the media about the hack. New York State is currently investigating misuse of NY residents’ identities in the hack; one might wonder if Pai is worried about any personal exposure arising from this investigation.

BUT WAIT…the reason I started this post began not in New York but in the UK, after reading that Remain turnout may have been suppressed by news reports about “travel chaos,” bad weather, and long lines at the polls. Had the traditional media played a role in shaping turnout with its reporting?

I went looking for similar reports in the U.S. — and yes, news reports of long lines may have discouraged hundreds of thousands of voters in Florida in 2012. This wasn’t the only location with such reports in the U.S. during the last three general elections; minority voters are also far more likely to experience these waits than voters in majority white areas.

Probabilistic reports about a candidate’s win/loss may also suppress turnout, according to a Pew Research study.

Think about low-income voters who can’t afford cable TV or broadband internet, or live in a rural location where cable TV and broadband internet isn’t available. What news source are they likely to rely upon for news about candidates and voting, especially local polling places?

Imagine how voter turnout could be manipulated with reports of long lines and not-quite-accurate probabilistic reports about candidates and initiatives.

Imagine how a nationwide vote could be manipulated by a mandatory company-wide series of reports across a system of broadcast TV stations accessing 72% of U.S. homes.

How else might a media company with monopolistic access to American households condition the public’s response to issues?

There was all kinds of hullabaloo about the intersection of retiring Justice Anthony Kennedy, his son Justin, and Justin’s employment at Deutsche Bank at the same time DB extended financing to Donald Trump. It looks bad on the face of it.

And of course one prominent defense-cum-fact-check portrays Justin’s relationship to DB’s loans to Trump as merely administrative:

The extent to which Kennedy worked with Trump on this loan, or possibly on other Deutsche Bank matters, is unclear. “In that role, as the trader, he would have no contact with Trump … unless Eric [Schwartz] was trying to get Justin in front of Trump for schmoozing reasons,” Offit said, adding that he had recently spoken with former colleagues at the bank about Kennedy’s work.

Seems odd there has been little note made of Jared Kushner’s relationship with LNR Partners LLC — a company which Manta says has only 17 employees — and its subsidiary LNR Property which financed the Kushner 666 Fifth Avenue property in 2012. There was a report in Medium and another on DailyKos but little note made in mainstream news media.

I’m sure it’s just a coincidence that along with his business partner, Justin Kennedy was named 26th on the 50 Most Important People in Commercial Real Estate Finance in 2013 by the Commercial Observer — a publication of Observer Media, then owned by Jared Kushner. 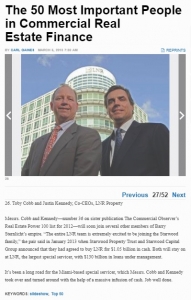 I wonder what Justin’s rank was on this list while he worked at Deutsche Bank (also with current business partner Toby Cobb).

How odd this deal and the relationship wasn’t defended. I guess it’s just coincidence all the amphibians and reptiles know each other well in the swamp.

All asylum seeking families haven’t been reunited. Children may still be in danger due to poor care and lack of adequate tracking. As of yesterday only 364 children of more than 2500 torn from their families were reunited.