Last night, Joby Warrick put up a dutifully transcribed article  in which the intelligence community is warning us to be very afraid that North Korea suddenly has bioweapons capability. Warrick had posted the video embedded in the article a week earlier, perhaps in an attempt to soften the terrain ahead of publishing the article. The bioweapons security theater beat is not at all new to Warrick. Just a little over four years ago, I noted the weakness of claims by the intelligence community, again transcribed by Warrick, that Syria suddenly was going to produce bioweapons.

As with any cranking of the propaganda machine, it’s always informative to look at the timing of both the current event and the components on which it has been built. The seeds of this one go back about two and a half years. As you may or may not recall, the Army announced in May of 2015 that it somehow managed to screw up and ship samples of live anthrax bacteria to South Korea. Seizing on the propaganda value of this development, within a little over a week, Kim Jong Un staged a tour of a “biotechnology facility”.  Warrick’s article last night, along with many other breathless accounts of North Korea’s sudden prowess in biological weapons, relies heavily on this blog post by Melissa Hanham analyzing images from Un’s tour of that facility. Information from Hanham also figures prominently in the analysis of North Korea’s bioweapons capability in this report from Harvard’s Belfer Center, which Warrick also relies on for his article. Laughably, the Belfer Center report adopts Rumsfeldian framing by speaking in terms of knowns and unknowns.

With rhetoric now reaching fever pitch on North Korea’s nuclear technology and missile technology, it feels a bit suspicious that we’re now going back to information that first surfaced in July of 2015. Also, with the Trump Administration looking for distraction from Mueller’s probe, something as sensational as a bioweapons scare coming from one of the current chosen enemies fits the bill quite nicely.

Warrick warns us in his third paragraph that:

North Korea is moving steadily to acquire the essential machinery that could potentially be used for an advanced bioweapons program, from factories that can produce microbes by the ton, to laboratories specializing in genetic modification, according to U.S. and Asian intelligence officials and weapons experts.

State-run news media described the institute as a factory for making biological pesticides — mainly, live bacteria that can kill the worms and caterpillars that threaten North Korea’s cabbage crop. But to U.S. analysts studying the video, the images provided an unexpected jolt: On display inside the military-run facility were rooms jammed with expensive equipment, including industrial-scale fermenters used for growing bulk quantities of live microbes, and large dryers designed to turn billions of bacterial spores into a fine powder for easy dispersal.

Many of the machines were banned from sale to North Korea under international sanctions because of their possible use in a bioweapons program. But Kim, wearing a white lab coat and trailed by a phalanx of scientists and military officers, appeared almost gleeful in showing them off, striking the same rapt pose as when he visits the country’s installations for nuclear weapons and long-range missiles.

Here is the photo with the fermenters in the background: 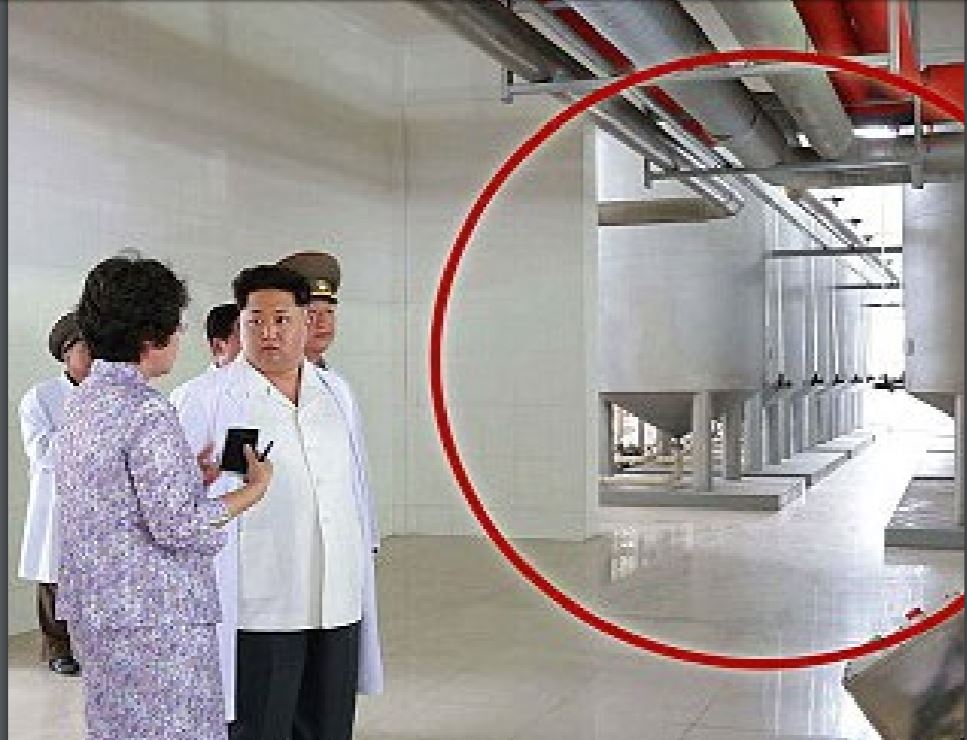 Here is the photo of the spray dryer mentioned above: 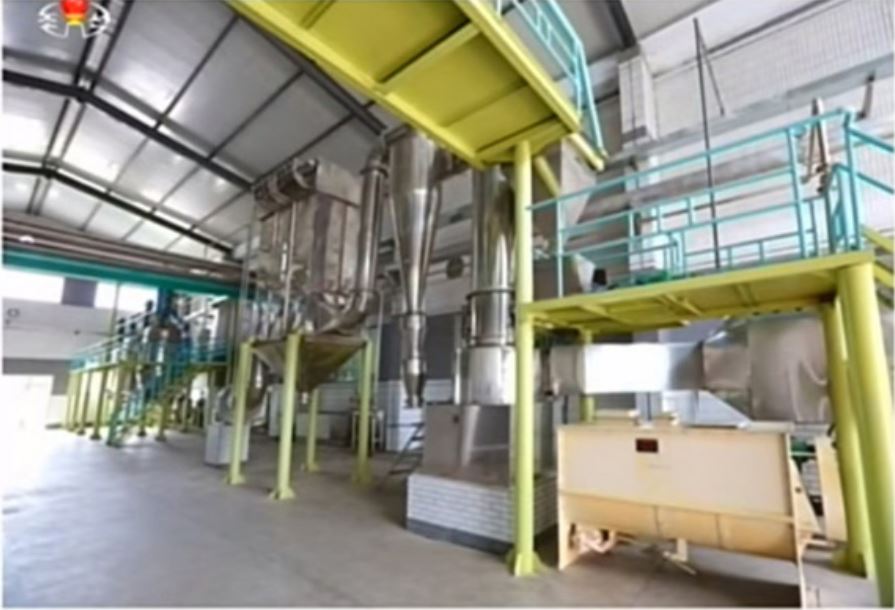 So the competing claims are that North Korea says this is a biopesticide facility that produces Bacillus thuringiensis for control of caterpillar pests on crops. The intelligence community is saying that this same equipment could be used to grow and weaponize the closely related Bacillus anthracis, the deadly bacterium used in the anthrax attacks of 2001.

First, at least the Belfer Center report did finally get around to noting just how much of an effort is needed to develop and then deploy biological weapons:

It is unknown whether North Korea has the capability to weaponize all 13 types of agents, and whether North Korea has the capacity to produce a mass stockpile of stabilized biological agents. Regarding the first aspect, little information is available. The ROK Defense White Paper mostly mentions anthrax and smallpox, so these could be agents that North Korea has higher capability to weaponize. However, it is important to note that despite an investment of 40,000 personnel over 63 years (1928-1991), the Soviet Union’s BW program yielded only 13 weaponizable agents. Although increase in biological knowledge in the modern era could expedite weaponization, it is highly unlikely that all of North Korea’s agents are ready for weaponization.

So, yes, it appears that North Korea’s efforts, if there are any, fall far short of what the Soviet Union put into their bioweapons program.

But there are additional problems with Kim Jong Un’s facility. It doesn’t appear to me to work either as a biopesticide production facility or a bioweapon facility. Warrick does finally get around to some of the problems:

Some weapons experts were skeptical, noting the absence of biohazard suits and protective gear typically found in laboratories that work with deadly pathogens. But since the release of the images, subsequent examinations have poked holes in the official story about the factory’s purpose. For one thing, some of the machines shown in the video were not visibly connected to any pipes, vents or ductwork. Experts also have questioned why North Korea would buy expensive industrial equipment at black-market rates, just to make a pesticide that can be purchased legally, at vastly cheaper rates, from China.

Here is what an actual facility for mass production of Bt looks like: 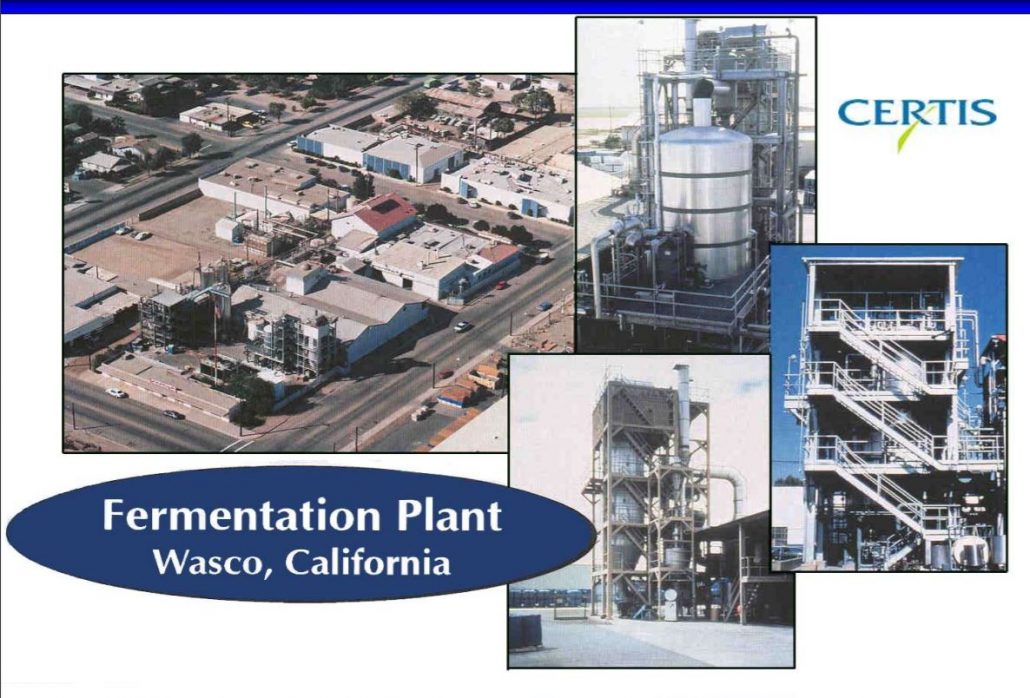 This slide shows both an industrial-sized fermenter and spray dryer. Clearly, the equipment Kim Jong Un is showing falls far short of the size used in actual industrial production, although at least the collection of fermenters in his photo is larger than one would expect for a simple research facility. [Full disclosure: a former co-worker of mine was at one time one of the primary fermentation operators at the Wasco facility.]

There are further problems with the loose “dual use” language employed by all of those who want us to fear North Korea’s biological capabilities. If we focus on the central question of whether Bt or anthrax is produced by the facility, we must deal with the biological and engineering differences between such facilities. First, Bt is only infectious to insects and so the human protection protocols are only aimed at the normal precautions taken in industrial production of microbes where workers are protected from exposure to high concentrations of bacteria or bacterial debris, but infectious concerns are not present. Minor amounts of residue or aerosols are allowed in a Bt facility but would be fatal in an anthrax facility. The level of biocontainment in the North Korean photos would, at best, be consistent with Bt, but might even fall short of that.

Of course, one could argue that North Korean workers in an anthrax facility would be vaccinated. But that seems to me to be the key piece of evidence missing in all the warnings we are getting in this bit of theater. US export of the only anthrax vaccine produced internally is controlled, although the level of control was reduced somewhat in 2005. However, if NSA and CIA aren’t working hand in hand to monitor the shipment of every vial of anthrax vaccine shipped outside the US (whether produced here or not), I want my tax dollars back. And the fact that we aren’t hearing that North Korea has started vaccinating workers against anthrax in any of its biotechnology facilities makes me think that they haven’t started a serious effort on this front.

One further bit of difference between Bt and anthrax facilities concerns the particle size achieved in the final product coming out of the process. A biological difference comes into play here. In the case of Bt, the final product is applied to plant leaves. Caterpillars eating the leaves are then infected when the bacterial spores germinate in the gut. The particle size in this case is fairly unimportant as long as it gets consumed. For anthrax, infection occurs when anthrax spores are breathed in and the spores travel to the smallest passageway in the human respiratory system.  Individual spores are only about one micron (one millionth of a meter) in length. Some of the material in the anthrax attacks of 2001 was specially treated so that individual spores would become easily suspended in the air. A very infectious particle size would be in that same one micron range.

The same PowerPoint presentation I linked above for the Bt production facility has this slide on particle sizes for commercially available Bt: 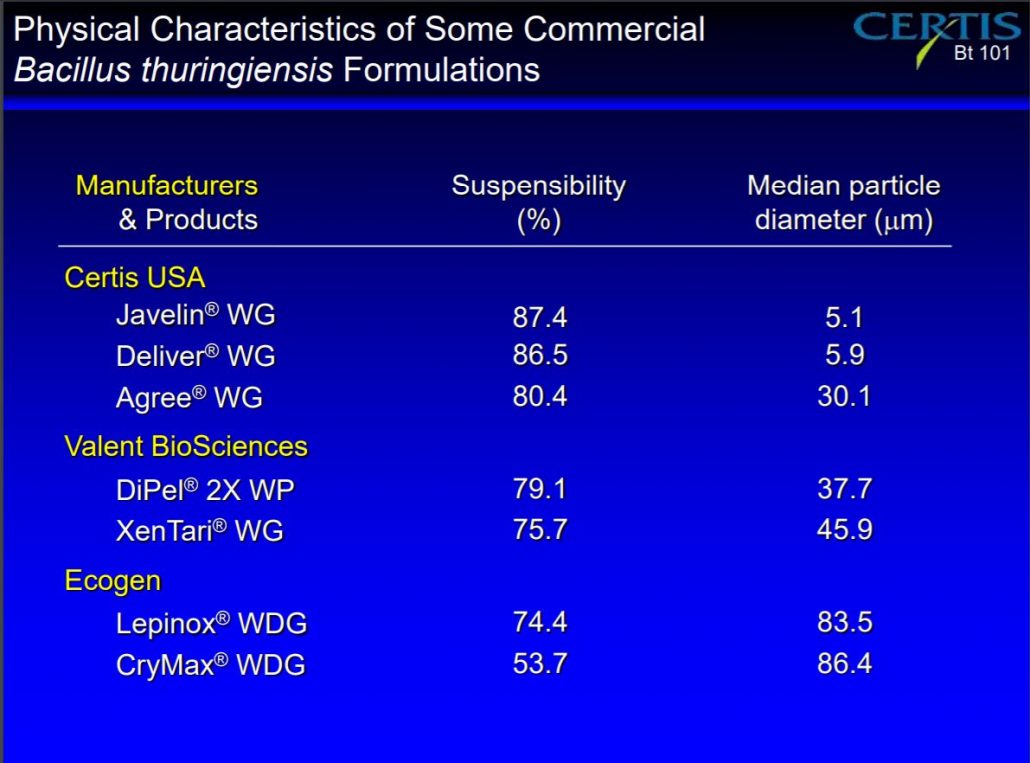 Spray drying equipment that produces really small particle size is restricted in access. The controlling authority is commonly referred to as the Australia Group list. From their publication, we have this on spray dryers: 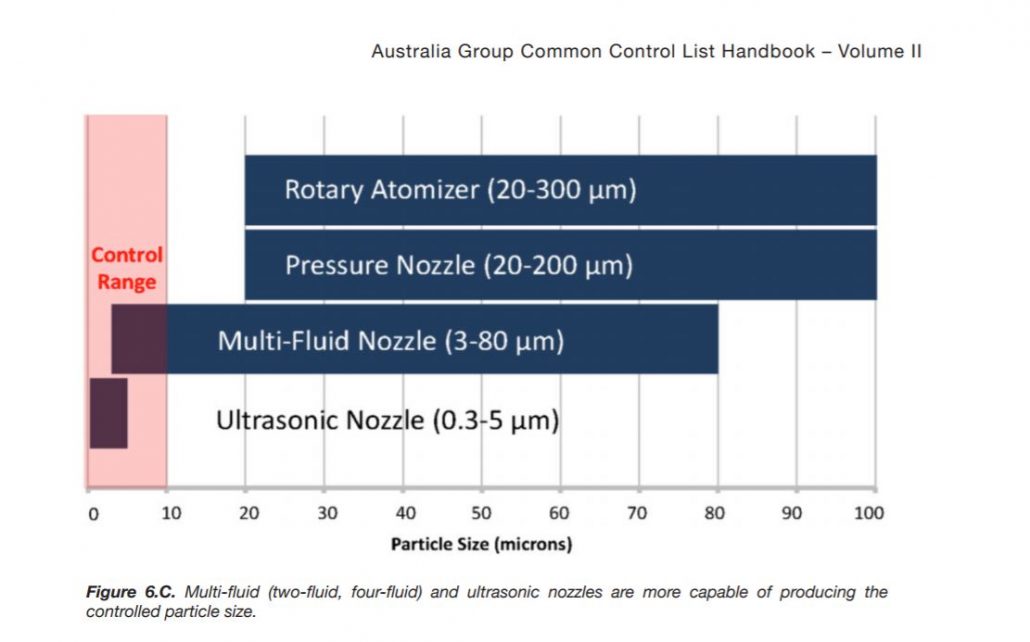 Spray dryers that can produce particle sizes below ten microns are tightly regulated and North Korea would have great difficulty purchasing this technology. It would be foolish, in my opinion, though, to even use a spray dryer for anthrax instead of the more advanced technology in my link above.

It seems to me that both North Korea and the US are engaging in hyperbole about North Korean capabilities in biological weapons. I find reason for concern in this exercise of security theater, but it is primarily based on overstated capabilities being used as a basis for starting conventional military action. Let’s hope North Korean anthrax capabilities don’t become the next aluminum tubes.