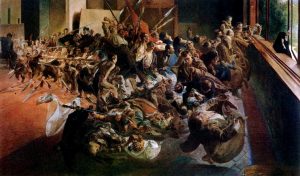 I’m writing most of this post nearly a week before this will actually publish. Since I first began blogging 15 years ago, I can’t think of a time when I couldn’t write a casual, evergreen piece without worrying what would happen between the time I first began typing and the post published. Now? I hope the Reichstag fire of our age has not been sparked by the time you read this and I finish clicking the Schedule Post button.

I guess if the Fire 2.0 has come, you’re probably too busy to read this anyhow. Why should I worry?

This week’s featured art is by Polish painter Jacek Malczewski. I had the privilege once of seeing some of his work during a trip to Europe. Words can’t convey the intensity, the palpable power of his painting. It feels as if it will fall out of the canvas at one’s feet in a fury of energy. This particular piece, Melancholia, is probably his most famous. It traces a narrative arc from left to right — how very western! — which nearly spills over the front bottom edge of the 4.5-foot by 8-foot canvas. The arc describes emergence of both the artist and Poland, from conception in the interior of an artist’s studio toward the open window and the sunlight beyond, from insurgency and exile to Young Poland of age and strife. The window’s sill forms a barrier, a limit beyond which death may exist, but whose limit, whose death? what an amazing amount of content crammed into this painting; I wish I could have found a better digital image to do it justice.

I asked in last Saturday’s open thread/art post for readers to consider this untitled piece by Zdzisław Beksiński. Beksiński may have been inspired by Malczewski’s Melancholia in his depiction of a surrealist gothic arc; this one is so dark, so tight that a narrative is nearly impossible to decipher. It, too, emerges from the left and transits to the right, but from a bright formless void to a bricked up exit. It is more melancholy than Malczewski’s work in its darkness. One of Beksiński’s more obvious nods to Malczewski’s Melancholia spells out ‘Melancolia’ without the frantic rush of history’s sweep — only death and decay.

You can find a nice selection of Malczewski’s work at this link, and a solid overview of his career as a Polish symbolist at Culture.pl.

Non-arts stuff (if it’s not mentioned here, bring your topic downstairs in comments):

PGA Tour — Okay, I admit it, maybe one of the pasty white guys in golf togs might have mixed it up and added a little excitement this week — by slapping an alligator. Youngster Cody Gribble chased the reptile into a pond and then finished his round; sadly, at six over after Day 2, Gribble isn’t expected to make the cut. The tour’s at the Arnold Palmer Invitational in Orlando this week. Kind of a shame I’m rooting for more gators on the course in the deep rough.

NCAA March Madness — Live bracket here. A bunch of whining about the NBA’s one-and-done rule here, possibly explaining away any boring matches which are complained about here. C’mon, these players are teenagers, well-trained but still like puppies. Stop expecting miracles.

And who knew that guys schedule their vasectomies in March so they can lie about and watch basketball while nursing their bruised ‘nads? But you can only use that excuse once, dudes. Next year you can schedule a hernia repair. Make plans now to lift something obscenely heavy in December or January.

NFL — The draft. Because somebody noticed I omitted it on first pass last week. ~shrug~ Must say NFL is a dreadful abuser of autoplay embedded video.

Football — No, the other football. UEFA Europa League competition starts soon, with quarter-final draw yesterday. Check the matches here. UEFA Champions League quarter-final draw also made with next games scheduled for April 11-12. Some drama in Europa League surrounding the win over Russia’s FC Rostov involving a banana. Sadly, not as exciting as a golfing alligator.

NHL — I give up. Detroit Red Wings are still in the goddamn basement of the Eastern Conference Atlantic Division. You go and make up your own filler here after reading the current standings. And I am really sick of the girls rubbing Dallas Stars’ Tyler Seguin and Jamie Benn photos in my face, going on and on about Tyler’s abs. This week’s win over Vancouver Canucks forced me to shut off my Twitter notifications because of the flood of photos.

NBA — I just don’t care. Although I must say I laughed out loud when I noticed the top story in my feed was this one. Oh yeah, that’ll change everything.

MLB — Same. And really, is there such a desperate need for content that writers are reduced to stories like this? Here’s a mid-spring training report, but holy wah, what a godawful layout on desktop displays. You’ve been warned.

If I missed something, bring it downstairs with you and share.

32 days until Tax Day deadline. Do you know where your deductions are?