From the time that training of Afghan forces first became disrupted by the security measures put in place in response to the spiraling rate of green on blue killings, I’ve been convinced that at some point NATO is going to be forced to give up on the concept of a target size of 350,000 Afghan security forces to be in place as NATO withdraws from the country. Despite the simple math that says any slowdown on feeding new recruits into a system that has such a high rate of loss means the overall size must decrease, it has appeared so far that NATO has been planning to game the numbers while adhering to the 350,000 force size.

On Saturday, a very long article was published by the Washington Post outlining a long litany of the problems associated with how the ANSF was expanded so rapidly and to such a large force size. Only by reading to the very end, though, do we get to what I think is the most important news in the article:

That now appears to be the direction U.S. commanders are heading. The White House and Pentagon have decided that the 352,000 will only be a “surge force” that will eventually be reduced to 228,500. The decision has prompted unease among senior U.S. commanders and protests from Levin, McCain and other congressional supporters of a large Afghan army. The Obama administration has billed it as a cost-saving move, but some U.S. officials see another motivation.

“Now we can start concentrating on quality,” said the senior U.S. official involved in Afghanistan policy.

But the planned cutback, which will not begin until 2016, already is fueling a new round of concern because the U.S. and Afghan governments have not started to develop a program to systematically demobilize soldiers and policemen by providing them alternative employment. If not, thousands of men with at least nominal military training will find themselves jobless the very moment the country’s economy will be struggling to cope with a drastic reduction in foreign spending resulting from the departure of most NATO troops.

Those who worry about “dismantling” ANSF to reach the lower number have nothing to worry about. The high rate of attrition says that any lowering of force size can be achieved rapidly merely by slowing input into the system. Afghanistan already is awash in thousands who were “trained” and then deserted the security forces, so the fears of releasing more are too late. Also, my prediction is that the projection that the cutback will not start until 2016 is merely a way to get agreement first on the smaller force size. Once the smaller size is a familiar concept, then I expect the timing for it to be changed dramatically to coincide with the actual withdrawal of NATO forces. Look for the withdrawal timing also to be accelerated greatly once the US election has taken place. By mid-December, I expect the plan to be for a withdrawal of the bulk of NATO troops within a twelve month timespan with a target ANSF size of 228,500 by the end of withdrawal.

But don’t expect Obama to admit that reality at tonight’s debate. He will steadfastly maintain that all 352,000 members of the ANSF are properly vetted (they aren’t) and trained (they aren’t) and stand ready (they aren’t) to take over as we leave by the end of 2014 instead of 2013. Look for Romney to hint that he wouldn’t really favor withdrawal, especially on a “timetable”. In other words, neither Obama nor Romney will say much of anything about Afghanistan that will align with how events will unfold after the election.

Defense Secretary Leon Panetta looks as though he is going to be the last person on the planet to realize what a failure US strategy in Afghanistan has become. Today, while visiting New Zealand, he announced that the final surge troops have left Afghanistan, returning troop levels to 68,000 from a high of 101,000 at the peak of the surge President Obama ordered at the end of his first year in office.

“There’s no question there will continue to be difficult days ahead in this campaign,” Panetta said at a news conference in Auckland, where he was making a visit, in part, to thank New Zealand for its contribution of about 180 troops to the NATO-led coalition in Afghanistan. “But this is an opportunity to recognize that the surge did accomplish its objectives.”

“As we reflect on this moment, it is an opportunity to recognize that the surge accomplished its objectives of reversing Taliban momentum on the battlefield, and dramatically increased the size and capability of the Afghan National Security Forces,” Mr. Panetta said.

It’s not until the very end of the article however, where we learn that Panetta’s claims don’t hold up:

However, the level of violence remains higher than it had been before the surge forces came. In the first six months of 2012, for instance, 1,145 civilians were killed, compared with 1,267 in the same period of 2010, when surge forces were only just arriving.

How can it be that the Taliban’s momentum has been reversed if civilian deaths are now higher than before the surge? [Correction: as pointed out by harpie in comment number 1, although the Times says violence levels are higher after the surge, the civilian death rate post-surge is slightly lower rather than slightly higher.]

Besides allowing Panetta to deny the reality of a Taliban that has lost no strength, the Times article article allows an anonymous military spokesman to lie about changes in the size of Afghan security forces during the surge:

“What did the surge give us?” a senior American official reflected on Friday. “We’re going to hit a point where, I won’t say that’s as good as it gets, but now it’s up to them to hold what we gave them. Now really it’s Karzai’s turn.”

The official spoke on condition of anonymity as a matter of military policy.

The surge brought American troops to a high of 101,000, along with as many as another 50,000 coalition troops, mostly from NATO countries. Over the past three years, the increase in American troops helped to enable an accelerated training program, the senior American official said, with the Afghan police and army more than doubling in number by this year, to 300,000.

Two things stand out immediately in the numbers supplied by the anonymous spokesman. First, until this statement, all recent stories have been referring to the size of the ANSF as 350,000. How did the number drop by 50,000? Is this a result of the re-screening that Afghanistan has been carrying out? This chart shows that the Afghan National Army, which accounts for about two thirds of the ANSF, saw a maximum attrition rate of just under 5600 in one month, so attrition alone cannot account for this large drop. [Note: I noticed when I checked the article again after 2 pm that the 300,000 number has been revised to 350,000. There is no indication within the article or at the usual slot at the bottom of the page where corrections are usually noted that this change has taken place. I had already pointed out that the military source was lying whether we used 300,000 or 350,000 as the current ANSF level.]

But the other thing that stands out in this anonymous statement is an outright lie. The official claims that during the surge, the ANSF “more than” doubled to 300,000. This Brookings publication (pdf) documents force size for the ANA and ANP, and it shows that in December 2009, when Obama ordered the surge, the force size was 195,089. If we use the source’s 300,000 figure for the current size, the current force is only 1.54 times the previous size, not more than twice. Even if we use the 350,000 figure that was used in all previous statements, the ratio only improves to 1.79, still well below twice the original size.

The military can lie all it wants, but it still cannot hide its failures in Afghanistan. 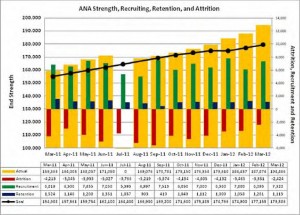