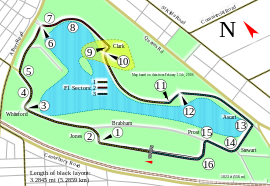 Welp, we have not had a Trash Talk thread here in a while. Since the Super Bowl by my guess. So, maybe it is time, and consider this an open thread because I know not all share the historical love of Formula One that this blog does.

The Circus season is about to open. As usual lately, it will be in Albert Park in Melbourne. And it is a fair and fast circuit to open the season with. Last year provided a shocker with Vettel and Ferrari taking the opening win. The rest of the season devolved into another Hamilton coronation though. Sadly. All things racing are better with better competition.

So this year, coverage of the Circus moves from NBCSN, which was abominable, back to ESPN from whence it came long ago. Personally, I loved Leigh Diffey, Steve Matchett and David Hobbs. But other than that, the always changing, and unpredictably located coverage by NBC was shit. As was their babbling and unctuous on scene pit row “reporter” Will Buxton, who is distressingly still present on the Sky feed ESPN uses. Can we swap Buxton for Leigh Diffey somehow?

ESPN may be doing it on the cheap, but they are doing so by utilizing a far superior European feed. Frankly, I am good with that, so far, so much the better. And we are not even into qualifying yet.

Okay, off we go for qualifying. We shall see that out before I post this, but the race, like The Dude, will have to abide.

And Qualy is off! The start of the season is always pretty exciting. Albert Park is a good spot, but not necessarily one of the classic circuits in F1. Probably a little warmer there than ideal, but still a decent track.

Wow. Just wow. The difference in the feed from the NBCSN years, as well as Fox/Speed, is like night and day. Incredibly superior. Hamilton takes pole, but Raikkonen and Vettel are in P2 and P3, with the Red Bulls of Verstappen and Ricciardo right behind.

Sadly Fernando Alonso in the McLaren starts out the season once again out of the top ten in qualifying. Couldn’t even make it into Q3. At some point he will no longer have it, and that day is quickly approaching, but Alonso is not done yet and the fact he is not in competitive equipment is a tragedy in the Circus. Put Fernando in Botas’ seat and Hamilton might pucker. But that is not happening, which is a sad thing for F1 fans.

So, we are off with a new season of Trash. It will be inconsistent until football really starts again, but will pop up every now and then. This weekend’s music is by Jimmy Barnes, a great Aussie import (for the Australian GP) that never got enough cred here in the states. In this clip, with Joe Bonamassa, but it is totally a Jimmy Barnes song (and it is awesome). Give it a listen, it is pretty great. Other than that, keep rolling, we have a long way to go yet.

It is the most wonderful time of the year – that’s right, the start of the Formula One season. 2010 turned into a nailbiter at the end, with the young and fast Sebastian Vettel of Red Bull pulling out the Driver’s Championship over runner up Fernando Alonso of Ferrari and Red Bull teammate Mark Webber by winning the last race with in Abu Dhabi. And so we start the new 2011 season full of hope and expectations for all the teams, but with the strength still where it was last year, with Red Bull, Ferrari, Mercedes and McLaren.

Already the season has been affected by extraneous forces, as it was scheduled to begin two weeks ago in Bahrain; but the turmoil of the crackdown on the Arab Spring in that country, thanks to the aid from shock troops from the oppressive US client state of Saudi Arabia, squelched that and delayed the season start until this weekend’s Australian Grand Prix. But the boys are already tearing up Albert Park in Melbourne as qualifying just went off as I write this post. There is a new rule for qualifying in 2011, to be eligible for the grid you must be within 107% of the fastest time clocked in the first qualifying session. This is a concept toyed with once before in F1, but sacked. The premise is that you do not want to many slow cars in the field buggering up the path for the faster vehicles. We shall see how it plays out this time and how the grids fill out with the 107% rule in place.

Another significant change is that Bridgestone is gone as tire supplier for the teams. The new supplier will be Pirelli and all teams are, for once, working closely with the manufacturer to insure that no teams get favored status. The early reports are that the rubber is burning off slightly faster than was the case with the Bridgestones; the upshot is there may be more pit stops and there may be more of a premium END_OF_DOCUMENT_TOKEN_TO_BE_REPLACED